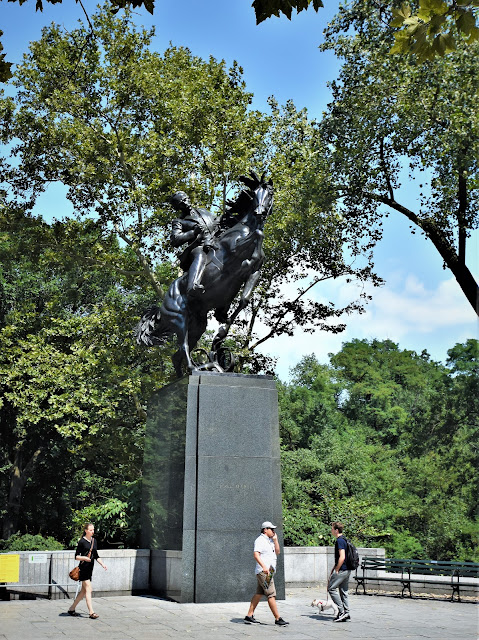 In 1945 Sixth Avenue, at the prompting of Mayor Fiorello H. LaGuardia, was renamed the "Avenue of the Americas" to honor Pan-American ideals.  In response a new plaza was designed at the head of the avenue where it meets Central Park.  The statue of Simon Bolivar was moved to the eastern side of the entrance and a month later the statue of José de San Martin was erected on the western side.

Eleven years later the renowned sculptor Anna Hyatt Huntington announced her intention to create a statue of Cuban patriot, author and poet José Marti as a gift to the Cuban Government.  The Parks Department, in turn, announced on July 29, 1956 that it had accepted the Cuban Government's offer to erect that statue in Central Park.  It would be placed at the curve of the roadway just behind the Bolivar and San Martin statues.

The New York Times added that Huntington "has estimated her work will take more than two years to complete."  No one could have anticipated the chain of events that would take place within those two years and the problems they would cause for Huntington's monument.

That Anna Hyatt Huntington chose the Cuban hero for her subject, or that she paid for the costly work out of her own pocket was not surprising.  Her recently-deceased husband, multi-millionaire Archer M. Huntington, had organized the Hispanic Society in 1904.  He began construction of the Spanish Museum building that same year; what would become part of his sprawling Audubon Terrace complex at Broadway and 155th Street.  Within its courtyard are Anna Hyatt Huntingon's bronze equestrian statue El Cid, a limestone bas-relief of Don Quixote and another of Boabdil, the last Moorish king of Spain.

Marti, the subject of her latest project, was a leader in the quest for Cuba's freedom from Spain.  After being imprisoned in 1868, he fled to New York in 1880 to continue advocating for Cuban independence in exile.  He organized the Cuban Revolutionary Party in New York in 1892.

In 1895 his support was strong enough that he returned to Cuba to fight.  He was fatally wounded during the battle of Dos Rios later that same year.  Huntington's vision of the statue would capture the moment that he was struck atop his horse.

While she steadily worked in her Redding, Connecticut studio, another revolution was playing out in Cuba.  Fidel Castro and his army of rebels were engaged in guerrilla warfare against the regime of President General Fulgencio Batista.   It culminated in the collapse of the Batista government on January 1, 1959, just as the Huntington statue was being prepared for casting.

Three weeks after Batista's fall Stuart Constable of the Department of Parks assured New Yorkers that the revolution would not affect the plans to erect the monument.  He said that "any honor paid to Marti would probably be as acceptable to the Castro Government as it was to that of General Batisa."  A spokesman at the Cuban Consulate unofficially agreed, saying "After all, Marti is a national hero."

The Bastisa Government had presented Parks Commissioner Robert Moses a check for $100,000 on December 3, 1957 to pay for a base for the Marti monument.  That massive, 16-foot-high black granite pedestal designed by Clarke & Rapuano was placed on the site to await the statue that would not come for years.

The enormous statue--it is 18-feet tall and weighs approximately five tons--was shipped to New York City and promptly "hidden" in a Bronx warehouse.  The State Department had stepped in to halt the erecting of the statue.  Authorities feared possible "disturbances" between pro-Batista and pro-Castro factions.

And, in fact, those fears were well-founded.  On February 7, 1960 the Santa Cruz Sentinel reported that New York "witnessed a riot between pro and anti-Castro factions recently during a wreath-laying ceremony in Central Park at the statue of Cuban liberator Jose Marti."

That wreath-laying had, originally, been intended as the unveiling ceremony.  Marti's birthday was January 28 and plans were made to finally present the statue on that day.   But half an hour before the statue was set to be hauled onto the delivery truck, a message came from the office of Stuart Constable to stop shipment.  Constable, who a year earlier had assured that the revolution would not affect that monument's dedication, now asserted the statue was "unfinished."

Anna Hyatt Huntington assured reporters that she had finished it two years earlier.  That State Department claimed, according to The Times, that "all it knows is that the Park Commissioner, Robert Moses, asked last November if Marti's birthday would be a suitable time for erecting the statue.  The department replied that Marti's birthday, Jan. 28, would be fine."

Amid conflicting stories and excuses the bronze artwork remained in the Bronx, partly covered by tarpaulins.  Cuban-Americans, nevertheless, forged on with their plans.  So on the day once planned for the unveiling, supporters of both Castro and Batista arrived to pay honor to their hero.  War broke out between the two factions.

The anti-Castro group, which called itself La Rosa Blanca (the white rose was a symbol taken from Marti's Versos Sencillos) had obtained a permit for a ceremony and the placing of a bouquet of white roses at the pedestal.  The Movimiento 26 de julio (The 26th of July Movement, a pro-Castro group) had been refused a permit.  But that did not stop their plans.

According to The New York Times account of the incident, the Castro supporters called La Rosa Blanca members "assassins, murderers" and their opponents shot back with "communists, godless blackguards."  Before the NYPD riot squad could quell the conflict 3 people were hurt and 12 arrested.


Four months after the ugly affair, the Havana-born New York University professor Dr. José Garcia-Mazas complained "I cannot understand why is was not unveiled last January 28.  Is it because the Park Department is afraid of a riot, or is it playing politics--that's the question."

Years passed and New Yorkers became accustomed to the sarcophagus-looking stone block; most essentially forgetting why it was there at all.  On February 1964 the San Bernardino Sun commented "In New York, covered with tarpaper, is a statue which has been causing the Department of State a lot of headaches. "  The newspaper opined that the "reason is that if the dedication ceremony was held, the Castrolites would insist on being present; so would the exiled followers of Batista.  There might be trouble."  But a more plausible reason at this point was that the United States did not want to appear to honor a Communist regime.

Later that year, on October 10, The New York Times said that the "conspicuously...horseless marble pedestal" which had now stood for five years was "puzzling tourists and New Yorkers--and irking many Cuban exiles."  The article said that Huntington's $200,000 work was "a captive of the Parks Commissioner, acting under advice from the State Department."

"And this has been the fate of the José Marti statue ever since, despite several appeals by anti-Castro Cuban groups to Mayor Wagner and the State Department, all explaining that José Marti was a national hero, the George Washington of Cuba, and that dedication of the statue would not be recognizing the Castro regime."

A few days before that article, a group of Cuban exiles had decided to take matters in their own hands.  They acquired the giant plaster model of the statue from Anna Hyatt Huntington and hauled it from her Connecticut studio to Manhattan.  At around midnight, 15 refugees readied themselves to erect it upon the granite base.  When they made too much noise, waking neighbors, six police cars responded, assuming the men were breaking into the large truck containing the statue.

The group was headed by none other than the NYU professor who had made his dissatisfaction with the Park Departments' inactivity known months earlier.  Dr. José Garcia-Mazas produced the paperwork proving he had rented the truck and the police left.

That was the least of their problems however.  Although the plaster model weighed much less than the actual bronze statue, it was too massive to lift.  According to The Times, "So they decided to reassemble the pieces on the ground, confident that the 600-pound statue would not be easily carried away by the police.  Four hours later the statue was easily carried away by the police."

The U.S. and city authorities finally relented.  On January 27, 1965 The New York Times reported "After 13 years, the bronze statue of José Marti...will finally rise next month on its long empty pedestal at the southern end of Central Park."  The date set was February 21.  And Dr. José Garcia-Mazas was back in the news to explain that it was the Sunday closest to February 24, "the day the Cuban patriot began his campaign for independence in Cuba."

But now there was a new problem.  The newspaper said "There seems to be a bit of confusion about where the statue is.  The Mayor's office is certain the Department of Parks has it in storage somewhere.  But it was unable to run it down last night."  A representative of the Mayor's office promised "We are sure we will learn exactly where the statue is tomorrow morning."

And Park Commissioner Newbold Morris claimed he knew nothing about the plan.  Insisting that he was a "consistent admirer of Mrs. Huntington's works," he said that "no one had told him officially that the State Department had reversed itself.  "Until I am notified in writing by the Mayor's office there is nothing that can be done about the statue," he told a reporter.

Not surprisingly, February 21 came and went with no ceremony.  A new date was set for May 20, Cuban independence day.  In reporting on the revised date The New York Times mentioned "The sculptor, Anna Hyatt Huntington, now 88 years old, has been invited to witness the mounting of the statue on the pedestal and to come again for the dedication ceremony."

The statue was "quietly unveiled" on May 18, not the 20th.  Anna Hyatt Huntington was there, as hoped, and she was presented the city's gold medallion of honor.  The Times mentioned that "As the dedication ended a broad-shouldered Cuban--tie askew and in need of a shave--quietly placed a single white rose at the base of the pedestal and swiftly left.  He wouldn't give his name."

During the long odyssey the City of New York had grappled with another problem.  The Batista Government's gift of $100,000 to pay for the pedestal was slightly more than the actual cost.  A holding account had been established for the $10,861 while authorities wrangled about what to do with it.  Returning it to the now-Communist Cuban government no doubt seemed a bad idea.  And so finally in November 1972 the money was transferred to a reserve fund, making the City a bit richer.

Cuban-American relations began to improve in December 2014 when President Barack Obama and Cuban President Raul Castro announced a detente--what Cubans called the deshielo cubano, or Cuban thaw.  In response the Bronx Museum of the Arts gathered donations to make a copy of the Marti statue to present to the City of Havana.

But, as had been the case more than half a century earlier, things changed while the statue was being cast.  By the time it was ready for shipment in October 2017, the Trump administration had reversed many of the Obama-era agreements.  Nevertheless New York City went on with the gift.

On October 20, 2017 Reuters reported "Cuba unveiled a replica of a New York statue of independence hero Jose Marti on Friday, putting a gift from the hometown of U.S. President Donald Trump on public display at a time of heightened U.S.-Cuba tensions."  The statue was diplomatically situated, facing the Florida Straits with the United States coast just 90 miles away. 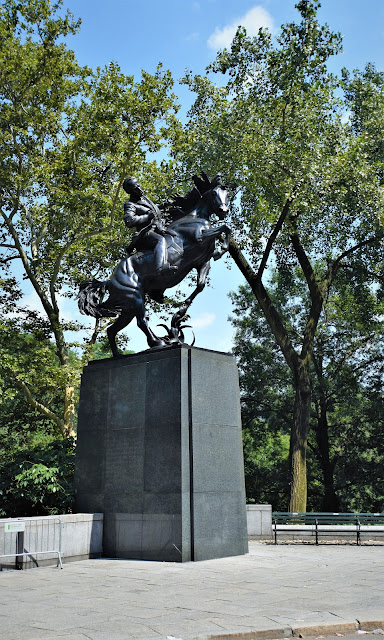 Anna Hyatt Huntington's bronze statue is among the most impressive of Manhattan public artworks.  The power and motion of the horse and its rider caught at the moment Marti was fatally shot, are masterful.