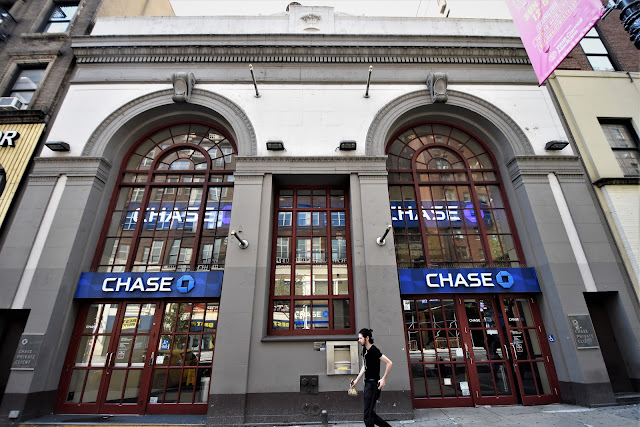 Founded in 1853, the Corn Exchange Bank had grown prodigiously by the turn of the century.  Branches sprouted throughout the city as the population shifted; and in the spring of 1914 another was on the horizon.

On April 17 The New York Times reported "The Corn Exchange Bank has purchased from Bella Glaser the two old five-story flats at 124 and 126 East Eighty-sixth Street...While the bank officers have not fully determined upon the changes to the property, it has been decided to alter the lower floor of the house at 126 and establish a branch of the Corn Exchange Bank there in the near future."  The article noted that later "the entire property may be improved with a large banking office on the ground floor."

The trustees soon made up their minds.  Within two months they had remodeled the ground floor of No. 124 as a banking office and on June 21, 1914 The Times reported "The adjoining structure at 126 has been torn down, and work is now under way for an artistic two-story building, which will be exclusively used by the bank when completed in the Fall."

The Corn Exchange Bank routinely used the talents of architect S. Edson Gage for its structures.  His neo-Classical designs were tried and true, and his branch bank buildings were often slight variations of one another.  Such would be the case with No. 126.  Its clean neo-Classical facade featured a double-height arch and shallow understated pilasters.

The 86th Street Corn Exchange Bank became part of an economic-political scandal in 1922 involving the mayor, Tammany Hall big shots and a shady character called Fishhooks McCarthy.   The Transit Commission had launched an investigation into the operation of bus lines, the operating permits of which were granted by the mayor's office.

A powerful figure within the Tammany organization was John A. McCarthy.  On October 26, 1922 the New-York Tribune reminded its readers "McCarthy is the same 'Fishhooks' McCarthy who recently pleaded guilty of conspiracy in restraint of trade with other members of the builders' ring."

The new bus lines, which included the crosstown Eighty-sixth Street line, had been advocated by Mayor John Hylan, and now it appeared that his office was giving control of the lucrative lines to Tammany affiliates.

In the course of testimony on October 25 it was revealed that "Fishhooks" McCarthy was "the virtual owner of the profitable Eighty-sixth Street bus line."  Although his name did not appear on the paperwork, he had provided the money for the permit to "dummies."  They would then deposit the receipts into McCarthy's account in the Corn Exchange Bank on 86th Street.  The buses took in about $40 per day--more than $4,000 a week today.

Clarence J. Shearn told reporters he expected "in the light of yesterday's revelations, to be able to show a clear and far more extensive connection between the newly established bus lines of the city and Tammany Hall, the bus lines lining the pockets and enhancing the political prestige of the district leaders."

Earlier that year two boys, 14-year-old Charles Wolfe and 15-year-old Oscar Spiegel were passing the bank when they noticed a slip of paper on the sidewalk.  (The New York Herald mentioned that "Oscar is a water boy in a theater and Wolfe is a high school student.")   The paper was a check for $50 payable to Sarah Wendell, who had apparently dropped it on her way into the bank.

The teens weighed their options--turning in the check worth about $731 in today's money, or cashing it.  They chose the latter.  They carefully signed Sarah Wendell's name to the back of the check, then cashed it at the Emanuel Hayman's stationery store on Third Avenue.  While Hayman's trust seems on the surface naive (or even stupid), he knew the grandmother of one of the boys.

While there Oscar and Charles purchased a $15 electric train.  They walked out with the $35 change which they divided and then went to the movies "and otherwise enjoyed themselves until it was gone," according to detectives.  Their enjoyment was short lived.

When Hayman went to the bank and found the check was "wrongly endorsed" he notified the police, who were given the address of the grandmother.   The boys were arrested within hours.

Eleven years after he had designed the 86th Street building S. Edson Gage was brought back to enlarge it.  The old building at No. 124 was demolished and Gage doubled the size of the branch office with a duplicate of the original, completed in 1925.  A cornice and parapet with a bas relief sheaf of wheat--symbolic of productivity--joined the two sections.

Four years earlier Percy Jay Fuller, the financial advisor to Milla D. Shonts, had deposited 97 railroad bonds into his safety deposit box vault here.  They had been the property of Milla's recently deceased husband, Theodore P. Shonts, for many years the head of the Interborough Rapid Transit Company.  Milla now lived in Pennsylvania, so she gave Fuller the bonds, along with other tangible property, to manage for her.

Now, in the spring of 1928 Milla's funds were inexplicably running out.  In addition, many valuable items were missing, which Fuller claimed he knew nothing about.  Additionally, he insisted he had never received the bonds.  The New York Times reported on April 12 that Milla had obtained a court order permitting her attorney, Robert M. Simpson, to open Fuller's vault in the 86th Street branch.   Simpson, according to The Times, said that "$150,000, including interest, is due on the ninety-seven $1,000 bonds."

Fuller's attorney insisted that the bonds were not there.  And, indeed, they were not.  Fuller was sent to an Atlanta prison; but that did not solve Milla's problems.  Following her death on June 21, 1929 the once wealthy widow was declared insolvent.  Her daughter explained to the press that Fuller had made off with not only with the bonds, but valuable items like "a set of Bibles, four rugs, four Aubusson tapestry panels, a gilt clock and mirror."

In 1954 the Corn Exchange Bank merged with Chemical Bank to become the Chemical Corn Bank.  Louis Landi became a client of the bank in December 1958 when he rented a safe deposit bank.  He did not use his own name on the paperwork, however, instead signing "John Costa."  He placed a package into the box and locked it.  The package contained half a million dollars in heroin; more in the neighborhood of $4.2 million today.

Landi was already known to police.  Ten months earlier he had been arrested in Hempstead, Long Island for being part of a major heroin ring.  He was out on $10,000 bail.  The chain of events that ended his freedom started on March 16, 1959 when police raided the apartment of Frank Russo, another of the Hempstead gang, and found 15 ounces of heroin in his refrigerator.  There were also $1,501 in cash and five safe deposit box keys from the 86th Street bank.

With a court order, Federal agents opened the safe deposit boxes, including that rented by John Costa.  Bank employees identified Costa as Louis Landi through mug shots.  That alone was not evidence enough for an arrest; so in order to get positive identification the Feds embarked on a clever ruse.

When Landi was arrested in Hempstead his automobile had been impounded.  Police now notified him that they would release the car to him, and he agreed to accompany them uptown to retrieve it.  Instead, they pulled up to the Corn Chemical Exchange Bank.  At 2:00 on the afternoon of April 9, 1959 Federal narcotics agents waited inside.  When Landi was identified by bank employees, he was arrested on charges of possessing heroin with the intent to sell.

The bank got a new name once again in 1995 when it merged with Chase Manhattan Bank.  The bank continues on in its little-changed 86th Street branch building after nearly 105 years.

photograph by the author
Posted by Tom Miller at 3:26 AM