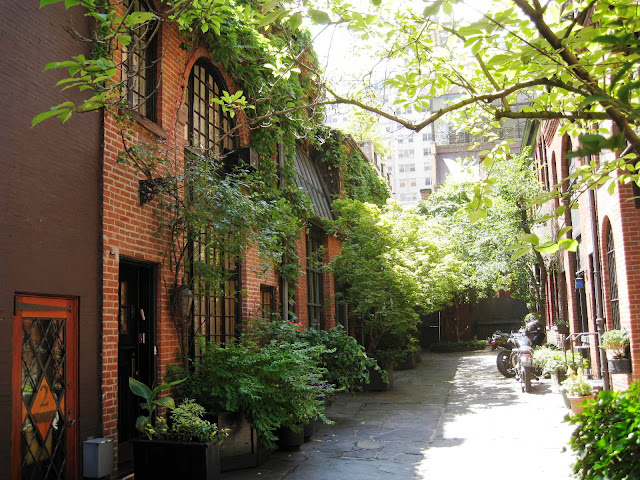 Private stables presented a problem to developers and moneyed families in the 19th century.  The unavoidable odors, flies and noises made them unwelcome neighbors to high-end homes.  Therefore "stable blocks" were often established, shared only by carriage houses.  But in 1863, as Murray Hill was emerging as one of Manhattan's most exclusive residential neighborhoods, three ambitious speculators came up with a novel idea.

John E. Wylie was a broker, Caleb B. Knevals was a wholesale grocer and director in the newly-formed Domestic Sewing Machine Co., and James D. Smith was a merchant, partner in the firm of Smith & Garvin.  The three purchased land on East 36th Street between Lexington and Third Avenues and laid out a cul-de-sac of ten 19-foot wide stables.  The ingenious design was not only an economic use of space, but sought to remove the disagreeable smells and noises from directly on the street.

Builder John Sniffen may have also acted as the architect of the two-story Romanesque Revival style structures.   But whether he did or not, the three investors named their mews after him:  Sniffen's Court.  (Popular usage changed the name simply to Sniffen Court by the 1880's.)

Completed in 1864, there were five stables on either side; Nos. 1 through 5 on the western side and Nos. 2 through 10 on the eastern.  Within a three-month period from May to July that year they were all sold.  In April 1869 the owner of No. 9 offered his. for rent.  His advertisement gives a striking glimpse inside.  It listed in part "well lighted and ventilated; stalls for four horses and room for three carriages; coachman's rooms, &c."

The private stables housed the horses and vehicles of some of Murray Hill's best known citizens.  An exception was Whitelaw Reid.  The politician and publisher lived in the Villard Houses on Madison Avenue and 50th Street.  He purchased No. 7 from the Kingsland family on November 30, 1885.  The price he paid would equal about $135,000 today.

Randolph Guggenheimer purchased the stable from Reid ten years later.  He already owned No. 9 and now joined the two internally.

The wealth of their owners could do little to lessen the pernicious smells and, in fact, the enclosed conditions caused by the mews design may have exacerbated them.  On August 21 1895 The New York Times reported that the Board of Health had deemed Sniffen Court a "public nuisance" and specifically cited No. 2.  The article warned "The Board of Health has the right to order the tearing down of a building unfit for occupancy for sanitary reasons."

The violations were corrected and No. 2 would become the first of the stables to be renovated, triggering a trend that would change the personality of Sniffen Court.  James E. Tolfree and his wife, Carrie, had owned Nos. 2 and 4 for years (they purchased No. 4 in 1874).  On May 23, 1914 the Real Estate Record & Guide reported that Tolfree had commissioned architect Harrie T. Lindeberg to alter No. 2 (described as a "garage), into a "two story brick private dwelling."  The alterations cost Tolfree $1,500, just under $4,000 today.

The renovations foreshadowed a much more extensive re-make five years later.  Architect Leon N. Gillette purchased the former stable, now renumbered 156 East 36th Street in April 1919.  He was a partner in the well-known firm of Walker & Gillette and his wife, Sybil Kane Walker, was a decorator.

The Gillettes combined Nos. 156 and 158 into a single residence. Two floors were added along with picturesque details like a tiled roof, a whimsical oriel to the side, and multi-paned bay windows flanking the entrance.


The Gillette family remained at No. 156 for decades.  On April 16, 1939 they announced the engagement of daughter Jeanne Baptise Gillette to Thomas Eugene Lovejoy, Jr.  The fashionable wedding took place in Larchmont, New York, where the family had their country home.

The Gillettes were still living here in May 1945 when Leon N. Gillette died at the age of 67.  By now Sniffen Court had significantly changed.

In 1901 Randolph Guggenheimer had sold Nos. 7 and 9 to Lewis C. Ledyard, who made renovations to the combined structures.  He sold the property to Henry Clews in 1910, who continued to use it as a stables/garage.  But after banker and railroad mogul Charles W. Lanier purchased the building in 1921, The New York Herald announced he intended to remodel "the old stable property" into "a dwelling for his own occupancy."  The article added "Practically all of the pretty studio dwellings in this sequestered thoroughfare are converted stables."  The New York Times chimed in saying "These changes have made Sniffen Court one of the characteristically attractive small residential thoroughfares on Manhattan Island."

Tragedy had occurred on the opposite side of the court a few months earlier.  Julian Dick and his wife, Elizabeth, occupied a studio in No. 4 where they hosted a New Year's Eve party on December 31, 1920.  The 34-year old Dick was a member of the New York Cotton Exchange and a member of the stock brokerage firm of E. F. Hutton & Co.  He had graduated from Princeton in 1908.

Among the guests that night was Dick's closest friend, George Bruce Brooks.  The Maryland newspaper The Daily Banner, said the two were "the closest of friends, their intimacy having begun more than ten years ago with their first meeting and ripened in subsequent years which found them fighting side by side in France, both as Capts. of artillery."

At 6:00 a.m. all the guests had gone home except for Brooks and George Ridgley.  Brooks noticed that his army revolver was lying on a table, where he had absent-mindedly left it during an earlier visit.  He picked up the weapon and started to remove it from the holster when it discharged.  Julian Dick cried out, "I am shot."

In reporting on the bizarre accident, The Daily Banner digressed to describe Sniffen Court. "The apartment of Mr. and Mrs. Dick is in one of a group of half a dozen one and two story buildings facing on a small court running north and south on the south side of East Thirty-sixth street.  The buildings were formerly stables and were converted into studio apartments of two and three rooms, which subsequently attracted a small colony of painters, sculptors and literary folk.

"The doors of the little buildings are hung with heavy brass knockers, on which the names of the occupants are engraved.  At the sides of the doors are lights of quaint design.  Evergreens deck the window ledges and the general setting suggests some of the small streets of old Italian cities."

Julian Dick died on January 3, 1921.  But the tragedy did not end with his death.  Elizabeth left Sniffen Court, taking an apartment nearby at No. 116 East 36th Street.  She never recovered from the incident, suffering from what doctors called "melancholia."  When her maid arrived at the apartment on December 22, 1930, she found her 38-year old employer dead.  Elizabeth had opened the gas jets of the range and then calmly sat on a kitchen chair waiting for the end to come. 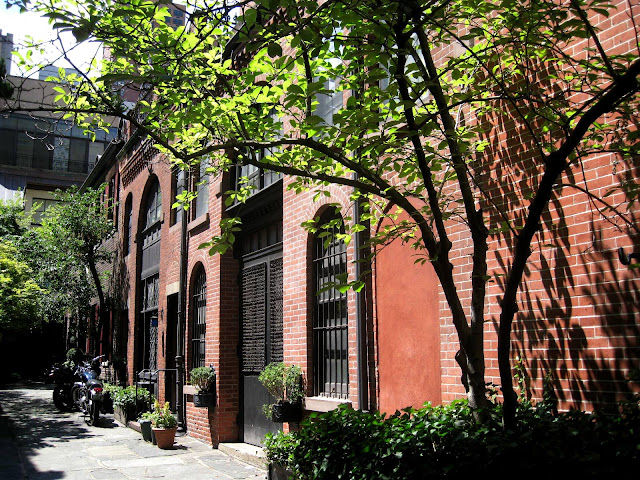 The "colony of painters, sculptors and literary folk," referenced by The Daily Banner followed the lead of artist Malvina Hoffman.  On June 22, 1919 The Sun said "Miss Malvina Hoffman, the sculptor, is given credit for 'discovering' Sniffen Court."  She lived in a studio for four decades and decorated the rear courtyard wall with bas relief sculptures of Greek horsemen.

The Sun described the average layout.  "The interiors are equally picturesque, consisting usually of one big room on the ground floor with a fireplace, a kitchenette, and a mezzanine floor divided into sleeping quarters, maid's room and baths.  They rent from $1,200 up to $2,500."  The highest rent would equal about $3,000 per month today.

The article added "In the group is the Comedy Club, and the rest are occupied by artists, a sculptor and a small coterie of army and navy folk."  A year earlier The Amateur Comedy Club, Inc. had purchased No. 1 and it was the only stable not renovated for residential use.

The group was formed in April 1888 when a number of the performers in Mrs. James Brown Potter's Madison Square Dramatic Organization broke away.  Meyer Berger, writing in The New York Times on January 21, 1959, explained they were "sickened by endless weepers" and "swore to give only comedies."

The male-only troupe was limited to 30 members and performed only for charities.  Should a play include a female role, "young women from old New York families have always been brought in," said Meyer.  Some of those went on to professional careers--including Clare Booth Luce, Elsie De Wolf, Julie Harris and Mildred Dunnock.

Although the Amateur Comedy Club's members were all "blue stocking," as described by Meyer, they helped pay expenses by leasing the club (now numbered No. 150 East 36th Street) when not in use.  On December 9, 1927, for instance, Mr. and Mrs. Walter Bryant Pierce used the venue for a lavish dance and supper party.  The guest list numbered 90 and The New York Times remarked "The club rooms were handsomely decorated."


Mark and Sarah V. Moran purchased No. 5 in 1921 for $25,000.  They hired the architectural firm of Suarez & Hatton to add a third floor, redo the floor plans and install bathrooms.  The family remained in their renovated stable at least into the 1930's.

The last to be remodeled seems to have been George T. Bowdoin's stable, No. 10.  In March 1937 he sold it "for remodeling," as reported in The New York Times.  The article noted that Bowdoin had owned it since 1904.  The renovations included the addition of two floors and conversion to two duplex apartments.

The charm and the property values of Sniffen Court only increased throughout the 20th century.  Residents included Russell A. Pettengill who died in 1954.  A two-day auction of art and furniture included an 18th century William and Mary inlaid walnut highboy which brought the equivalent of $9,000 today.  William H. Sudduth II and his wife, the former Muriel Seldon, purchased No. 6 after their 1937 wedding.  The couple appeared in society columns regularly over the years as they took cruises to exotic places like Hawaii, South America and the Mediterranean.  And Howard M. Chapin, general manager of the Birds Eye Division of General Foods lived in No. 10 with his wife, Barbara, in the 1940's and '50's. 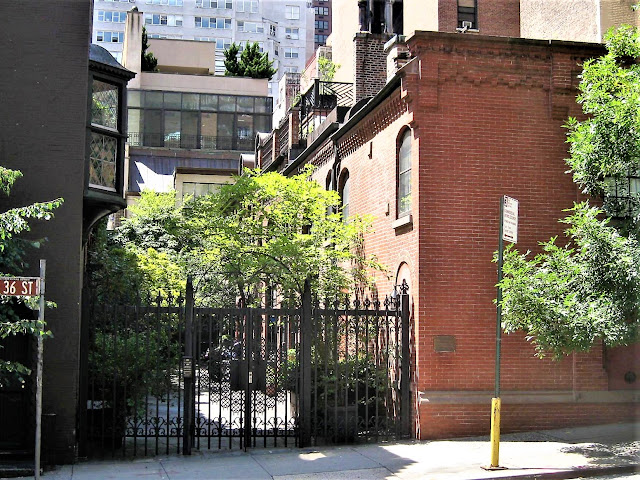 An iron fence and gate protects Sniffen Court today.  Peering through it the passerby recalls a line in The Sun in 1919:  "like a little bit of home is the glimpse one gets from the street."