A Varied and Sketchy Past - 143-145 Christopher Street 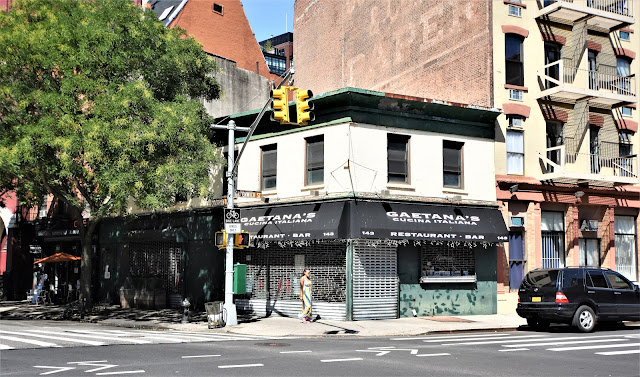 When builders James Barclay and Nicholas Connor began construction on the two story structures at the corner of Christopher and Greenwich Streets for Thomas E. Broadway, Jr., in 1867, there was no architect involved.  The red brick buildings would be a simple, no-nonsense job.  Described as "vernacular" in style--essentially meaning without a definite architectural style--they shared a straightforward pressed metal cornice.

Completed in 1868, one of the structures housed a wheelwright and blacksmith's shop on Christopher Street and the other a stable, opening onto Greenwich Street (it sometimes used the address of 684 Greenwich Street).  Upstairs was a dwelling.

Thomas E. Broadway, Jr. was a partner in his father's butcher business, T. E. Broadway & Son.  Highly successful in business, he was not so fortunate in love.  His wife, Kate, obtained a divorce on March 9, 1870 and quickly married J. W. Funk.  Her new husband was enraged when Broadway told associates that it was he, not Kate, who initiated the break-up.  Funk took out an advertisement in The New York Herald in October that read in part "It having been rumored that Thomas E. Broadway, Jr., had obtained a divorce from his former wife (Kate Broadway), the attention of all whom it may concern is called to the following article."  A reprint of the New York Daily Times article followed, which said Kate had been the complainant and had won court costs.

Thomas married Martha L'Hommedieu.  She had at least one child, Charles, from a former marriage.  The birth of a granddaughter, Frances Elizabeth L'Hommedieu in 1884 would cause tremendous upheaval down the road.

In the meantime, the projected uses for the two structures seem to have never come to pass.  In 1870 Peter Hagen leased the "stable," and while the paperwork repeatedly described it as such throughout the ensuing years, Hagen ran a saloon in the space.    Behind it, John I. and William Walling operated their shoe business.  They would remain until 1872.

Hagen's 1870 rent was $1,000 per year--or about $1620 per month today.  His location only a few blocks from the Hudson River piers and his relatively low overhead no doubt combined to make a profitable business.  When he signed a new five-year lease in 1893 his rent had increased to $1,500.  By then Christopher Street had been renumbered, giving the two buildings the addresses of Nos. 143 and 145.

As would be expected, the tenants in the upper rooms were working class. There were nine occupants living here according to the voter registration list of 1874.  (There were no doubt more residents, since the list did not include those not registered to vote.)

In 1884 carpenter Henry Hartung lived here.  He attempted to improve his lifestyle by applying to the New York City Police Department.  Hartung received disappointing news in February 1885 when he received notice he had had been rejected.

The influx of immigrants into the neighborhood was evidenced in August 1895 when Rocco Luigi Letella received his permit to "keep a stand in front of 684 Greenwich street."  What Letella's business was is frustratingly vague; but his stand in front of Hagen's saloon could have been anything from a shoe shine stand to a newsstand or perhaps a fruit stand.

Thomas and Martha Broadway lived in an impressive home in Islip, Long Island.  Previous to her death she asked her husband to take care of her granddaughter, Fannie.  In 1894 Charles L'Hommedieu, who made his living as an auctioneer, moved into the Islip house with the 10-year old girl.  The Sun explained "He did so because Broadway disliked to be alone."

It was most likely also Broadway's deteriorating health that prompted L'Hommedieu and his daughter to move in.  On April 3 that year Dr. J. Z. Wild of Bayshore, Long Island, was made "the attending physician at the Broadway house," according to The Sun.  Thomas Broadway's mental facilities began to fail around the same time.

Thomas E. Broadway, Jr. died in September 1897.  His six-line will left his entire estate to 13-year old Fannie L'Hommedieu.  Reaction was quick and more than 70 relatives (including his former wife Kate) contested the will.

When the trial began in March 1898, The Sun reminded its readers that the Fannie's new-found fortune was "estimated at over a million," and that her father had been made executor.  The family argued that Broadway's will was made under "undue influence and mental incapacity."

On March 17 Dr. Wild took the stand.  He told the court of Broadway's visions of his dead wife and that he "reverted to this hallucination on every visit that he made to him."  Wild said that he "never saw Mr. Broadway alone; that either L'Hommedieu or his daughter Fannie or one of the servants was present."  Seemingly adding support to the family's contentions, the only witnesses to the will were Charles L'Hommedieu and the gardener.

The trial extended for months, prompting The Sun to call it "the most interesting will case ever heard in this county."  On November 15 the will was upheld.  The Sun said "The decision of Surrogate Petty was a surprise to many who heard the case."

Included, of course, in Fannie L'Hommedieu's inheritance were the Christopher Street buildings.  The teen was less interested in the management of her real estate (that was left to her father) and more on her comforts.

On March 25, 1903 Charles L'Hommedieu was directed by Surrogate Petty (the same judge who upheld the will) to give an accounting of Fannie's spending.  Because the principal estate was held in trust for the minor, she was permitted only to spend the earnings which amounted to $12,736.30 per year (about $366,000 today).  And she did.

L'Hommedieu explained to the court that "it was impossible to support her on less than the whole income."  The New-York Tribune reported "The accounting was not contested in any way"

In 1906 the buildings were combined.  New beams, columns and girders were installed and that year John J. Coogan, who also lived upstairs, took over the saloon, which now engulfed the entire ground floor.  In 1913 his excise (or liquor) license described his operation as "hotel," suggesting he managed the entire building.

Coogan's saloon and hotel business was upset by the onset of Prohibition.  In January 1923 The New York Times reported that the Cathedral Cafeteria had been incorporated, taking over the ground floor space.  It was a somewhat ironic name choice.  Almost four decades earlier in 1884, John J. Mitty was born upstairs.  In June 1926 Pope Pius appointed him as the Bishop of Salt Lake City.

Prohibition ended in December 1933 and it did not take the Cathedral Cafeteria long to re-invent itself as the Cathedral Bar & Grill.  But its location, directly next to the rectory of St. Veronica's Roman Catholic Church caused problems.  Its pastor, Father Delaney, went to court on July 11, 1934 to have the bar closed.  The New York Times reported that he testified "that the bar stood against the wall in a building between the cafeteria and the church.  He said that frequently 'loud language' could be heard in the restaurant at 6 A. M."

But the Cathedral Bar & Grill had a legal loophole.  The Times explained "even though it was less than 200 feet from a church, because the premises had been occupied for the past nine years" it was immune from that law and could not be closed.  The judge's Solomon-like decision ordered that the bar be moved from the wall next to the rectory and to the front of the restaurant.

When Fannie L'Hommedieu died, she passed the Christopher Street building to her aunt, Mary Brown King, who died in 1936.  The King family retained possession until 1959, when it was purchased by Empire Equities, Inc.  The New York Times noted it was the first sale of the property (since it's title had previously passed through inheritance) since 1865.

Tenants in the upper floor rooms continued, of course, to be blue collar and not always respectable.  Among the later was James Napole, aka Jimmy Napp, who lived here in 1965 when he was charged with tax evasion.  Although the 53-year old listed himself as "unemployed," he and five cronies were accused of not paying taxes on income of more than $450,000 between 1958 and 1961.  (The gross income would equal just over $1 million today.)

The Cathedral Bar & Grill made way for the Ballybay Pub in 1973.  By now the Christopher Street neighborhood had become the epicenter of the gay community.   In 1982 a gay bar, Two Potato, moved in and would be a destination spot for years.

The AIDS epidemic decimated the gay population in the 1980's and the neighborhood around Two Potato declined drastically, drawing a seedy and often dangerous element.

At around 1 a.m. on April 1, 1988 Colin L. Brown, who lived in New Jersey, was standing out front of the bar with friends when a group of Queens teenagers passed them.  One, a 14-year old girl, called them faggots.  A fist fight broke out during which Brown was stabbed in the liver.  Oddly enough, Police Captain Barbara Sicilia would not describe the incident as a bias attack.  She said since the stabber had not made the remark, and was defending the girl, it could not be defined as such.

Four months later a Two Potato regular, Fitzroy Green, left the bar with two men.  He was found the following day in a pool of blood in his nearby apartment.  He had been stabbed to death.  It was the second murder in the vicinity in less than a week.

When the liquor license for Two Potato came up for renewal in August 2001, residents revolted, sparking a heated controversy.  The New York Times reported on December 23 "Two Potato, a dingy gay bar at Christopher and Greenwich Streets, is in the middle of a dispute that pits accusations of gay-identity politics against claims of racism.

"The 15-year-old tavern, once at the center of New York gay life, now attracts a mostly gay, black and Latino crowd.  Neighbors say it is frequented by drug dealers and prostitutes who spill onto the sidewalk and cause trouble."

The State Liquor Authority suspended the license for 30 days, beginning November 26, and fined the bar $5,000.  Its owner said it would hopefully reopen in January under the name Chances Are.

The renaming took place and Chances Are lasted until 2005.  In the meantime, locals did not relent on their insistence that the Christopher Street neighborhood--filled with prostitutes and drug users--be cleaned up.  On January 19, 2001 Chairwoman of Community Board 2, Aubrey Lees, said "People are really fed up and disgusted." 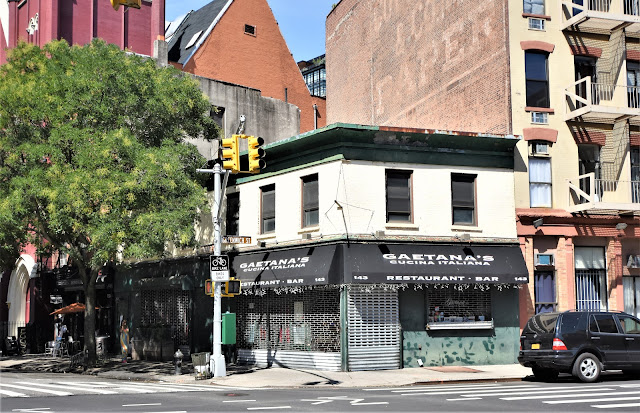 Increased police presence and enforcement did turn the neighborhood around.  In 2005 Chances Are was replaced with Bar Nocetti, and today is home to an Italian restaurant.  Upstairs there are four apartments.

The little building survives, a bit careworn.  Its past, never glamorous, has been unarguably fascinating.