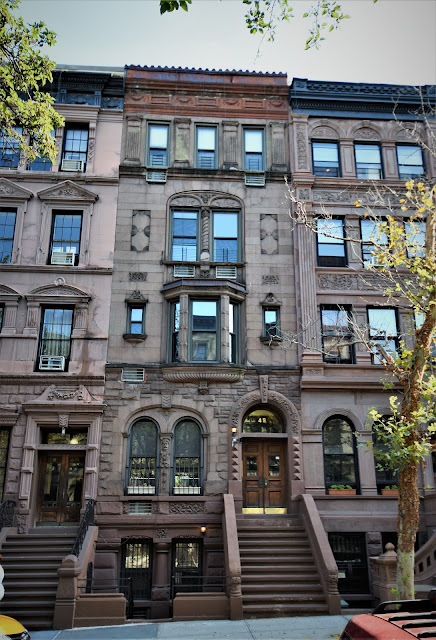 On August 14, 1886, the Real Estate Record & Builders' Guide remarked on the flurry of construction in the immediate neighborhood.  The journal attributed the activity to "a number of causes which make the owners of property there especially confident in its value."  Especially important was the proposed elevated railroad station at 86th Street, and the push to have 85th Street "macadamized" (an early form of asphalt pavement).

Thom & Wilson routinely dipped into a grab bag of historic styles and would do so again for Madigan's project.  Each of the homes was individually designed; yet they complimented one another in a blend of Renaissance Revival, Romanesque Revival, Northern Renaissance and a splash of neo-Grec elements.

The eclectic mix was perhaps best illustrated at No. 49.  The newels of the stoop were Romanesque Revival, as were the beefy engaged column of the basement level.  The parlor floor blended Northern Renaissance (in details like the portrait-decorated window pilaster) with Renaissance Revival (the delicate spandrel panels and the arch and keystone of the entrance, for instance). 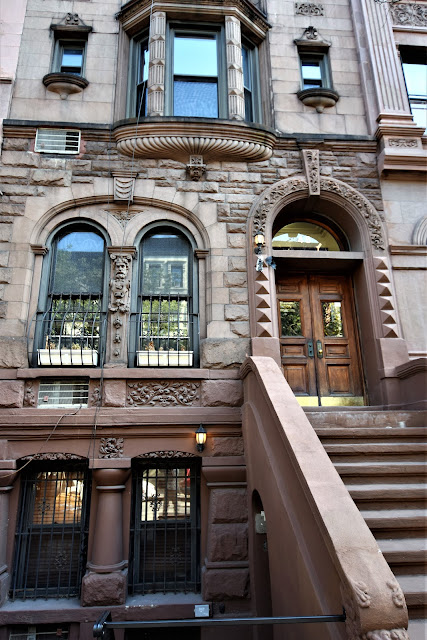 The planar-faced second and third floors featured a projecting bay flanked by two charming windows perched on carved, half-bowls.  Unexpectedly reserved panels directly above mimicked their proportions.  The fourth floor with its fluted pilasters sat below a neo-Classical inspired cornice.

Laviada was well known.  He was not only a successful commission merchant, but held the position of Mexican Vice-Consul.  His apparent wealth may have caused surprise to readers of the Record & Guide when they saw that he took out a mortgage for the full amount of the house.

It could be that Laviada was already anticipating trouble.  He and his wife had been drawn into a shocking court case two months later.  "Liverpool Jack" went on trial for hoodwinking Mexican workers.  As witnesses told their stories, it became evident that the Laviadas were heavily involved.

On September 27 William Quintano, who identified himself as "a employee in the office of A. Laviada," remembered that earlier that year while Laviada was in Europe Mrs Laviada received letters from Progreso, Mexico "saying that men were wanted there to work on the railways and docks."   Such requests were passed to Liverpool Jack who supplied the naive laborers.  Lured with glowing promises, they were given no contracts and there was no evidence that they were fed or even compensated.

It was possibly the damaging press that ruined Laviada's business,  He repeated borrowed money until, on February 7, 1891, his business failed.  He was in debt a staggering $67,267 (more than $1.7 million in today's dollars) which The New York Times said was all "for borrowed money."   Before the bankruptcy was announced, Antonio Laviada skipped town.  The Times said "Mr. Laviada is at present in Merida, Yucatan, being unable to return to New-York by reason of serious illness."

No. 49 became home to Deborah Ann Honeywell, the well-to-do widow of William Honeywell, who had died in 1877 at the age of 61.   She had grown up amid wealth and luxury.  Her father, Thomas Marshall, had operated the Fifth Avenue stage coach line.  She  had married Honeywell in 1844 and had four children, now all grown: Georgia, Josephine, William and Eliza.

The elderly woman contracted pneumonia early in 1906 and died in the house on January 13,  Her funeral was held in the parlor four days later.

No. 49 was inherited by Georgia (by now married to William Albert Merrill), and Mrs. Adrian Iselin Roberts, apparently Georgia's sister, Eliza.  The two couples not only lived together in the house, but often summered together.


The Roberts maintained a summer place in Hempstead, Long Island, but they often spent time at fashionable Richmond Springs, New York with the Merrills.  On July 14, 1907, for instance, when reporting that Admiral George Dewey and his wife were there, The New York Times added "Mr. and Mrs. Adrian Iselin Roberts and Mr, and Mrs. William Albert Merrill, of New York, are spending the season here."

The two women moved together among society nearly as a unit--a circumstance more expected with spinster sisters than affluent married socialites.  For instance, on February 28, 1909 The Times announced "On Thursday Mrs. Adrian Iselin Roberts and Mrs. William Albert Merrill will be at home at 49 West Eighth-fourth street,"

On October 10, 1919 the house was sold to Clarence F. Cavanaugh and his wife.   The sale did not break up the close relationship between the two couples.    Two days later The Sun reported that "Mr. and Mrs. Adrian Iselin Roberts and Mr. and Mrs. William Albert Merrill, who have sold their house at 49 West Eighty-fourth street, will be at the Touraine, 9 East Thirty-ninth street for the winter."

Cavanaugh had served as a private in World War I and his wife was highly active in the Roman Catholic interests.  But the couple remained in the house for just two years.  They sold the 20-foot house for $35,000 for the house, in the neighborhood of more than $475,000 today. 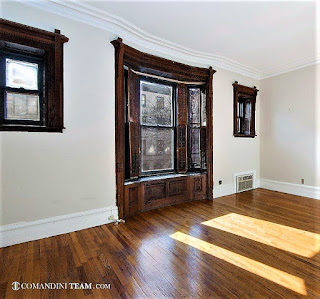 The buyer resold it in June 1923 for just $1,000 more.  Hattie M. Melhuish was a real estate operator who leased private houses like this one.  Even during the Great Depression years she managed to find single families for No. 49 rather than operating it as rented rooms.  In 1934, for instance, she signed a five-year lease with "T. Bagin." 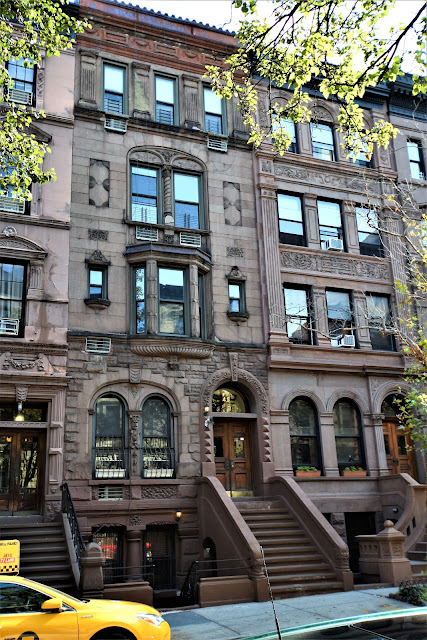 Amazingly, the Victorian rowhouse survived as a private home until 1970 when it was converted to apartments, just one per floor.  Although some of the apartments have undergone brutal remodeling, others retain historic detailing.  And, except for expected replacement windows and the barbarous disfiguring of the facade to accommodate air conditioners, Thom & Wilson's striking medley of styles survives wonderfully intact.