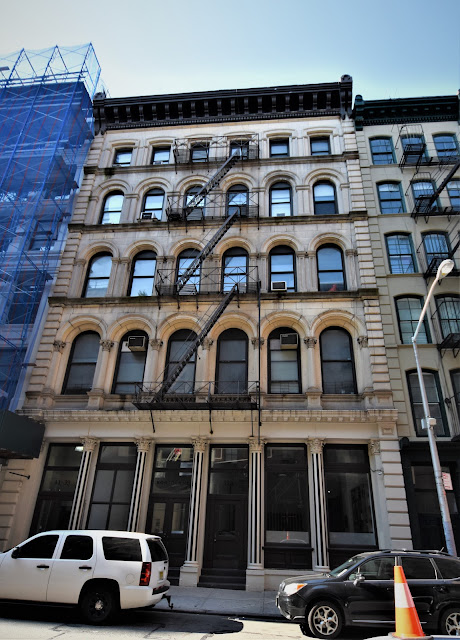 By the time the Civil War drew to a close John R. Ford had already had a varied career.  Until 1845 he had been a successful dry goods merchant in New Brunswick, New Jersey.  But that year he switched gears to enter into partnership with Christopher Meyer to form the Meyer Rubber Company in Milltown, New Jersey, makers of rubber boots and shoes.

Now in 1867, with a tremendous building boom taking place in the Tribeca district of Manhattan, he added real estate developer to his resume as well.   He demolished the two old wooden buildings at Nos. 39 and 41 Walker Street, between Broadway and Church Streets, and began construction on a modern loft building.

The name of the architect who created the handsome Italianate-style building, completed in 1868, has been lost; but the design was worthy of the best of the architects working in the district at the time.  A cast iron storefront with fluted Corinthian columns upheld four stories of marble.  Engaged columns separating the arched openings of the second floor sat on stately paneled pedestals.  As the windows grew shorter on each successive level, visually grounding the structure, their treatment became less orate--paneled pilasters at the third floor, blank pilasters at the fourth, and molded architrave frames at the fifth.  A handsome cast cornice completed the design.

The new building became home to E. B. Strange & Brother.  Born in England, brothers Edwin Brunton and Albert B. Strange had established the firm in 1838, originally importing millinery, feathers and French ribbons.  They took a bold step in 1863 by building a Brooklyn factory to manufacture its own silk ribbon and supply orders for specific colors not available from France.

By now E. B. Strange & Brother was the largest silk ribbon manufacturer in the country.  The same year they moved into the Walker Street building, they moved their factory to Paterson, New Jersey.  They also had a branch office in Paris.  Edwin oversaw the business end and Albert ran the manufacturing.

E. B. Strange & Brother dealt in other silk merchandise as well, such as scarves.  After $100 worth of scarves were stolen in 1870, detectives tracked down a portion of the merchandise to a Brooklyn store.  The scarves were traced back to John Jackson, who swept up and did other jobs at E. B. Strange & Brother.   At his hearing on April 22, Jackson's attorney supplied witnesses to support his preposterous alibi that he had simply found the scarves, worth about $2,000 in today's money.  One, a Custom House official, said "that he knew of one instance where a Government official found a lace shawl, worth $200, among the sweepings in a public store," as reported in to The New York Times.   The case was adjourned until the following week.

By 1880 E. B. Strange & Brother had moved to Nos. 42 and 44 Greene Street, replaced by Neuburger Braid Co.  Like their predecessors, the Neuburger brothers' mill was in Paterson, New Jersey.  The Silk Goods of America described the firm's dealings that year as "silk braids, fancy goods, bindings, and raw silk throwing on commission."

Neuburger Braid Co. remained in the building for over a decade.  In 1890 yet another pair of brothers, Colvert and Robert Wirths moved their "art goods" business in.   The two, both engravers, had emigrated from Hanover, Germany in the decade before the Civil War and formed Wirths Brothers.  The firm produced calendars, small illustrated books, and, perhaps most importantly, Christmas cards.

The idea of a Christmas card had originated in England in 1843.  The idea quickly spread to America and by the time Wirths Brothers were in the Walker Street building were highly popular.  Wirths Brothers cards went a step beyond the norm.  They designed and produced the cards and added fringe or lace, glitter, and painted satin.


The quality of Wirths Brothers goods was such that they exhibited in the World's Columbian Exposition in Chicago in 1893.  Of its staff of 34 workers in 1895 10 were men, one was a boy under 18-years-old, 13 were women and 10 were girls under 21-years old.  They worked 53 hours a week in the factory.

Following the sinking of the USS Maine in Havana on February 15, 1898, American patriotism soared.  Wirths Brothers responded by turning its attention to printing nationalistic-themed publications (some would say propaganda).  Five months after the incident Fame magazine announced "Wirths Brothers, 39-41 Walker street, New York city, have a half-page ad. of their 'war souvenirs,' 'In Memoriam,' 'Our Maine,' and 'Our Dewey.'"  And on June 16 The Fourth Estate, a weekly newspaper for the publishing industry, announced "Wirths Brothers, 39 Walker street, New York, will pay tribute to the chief topic of the time by advertising war pictures."

As the century drew to a close Wirths Brothers shared the building with a new type of tenant.  A. Kaplan, makers of shirts and waists (the popular tailored women's blouse) was here by 1899, employing 4 men and 11 women.

After being in business for more than half a century, Wirths Brothers closed in 1902.

Leousi, Clonney & Co. was in the building by 1906.  The firm imported and sold chemically bleached sponges and would remain here into the World War I years.

Women garment workers were beginning to organize by now, and in 1909 Abraham Sitomer thought he had successfully dealt with a labor problem.  Sitomer 's 200 female workers were members of the Waistmakers' Union.   When his staff walked off the job, he had signed the union agreement on November 28 and everything seemed to be settled.  But then when the union discovered he was selling his goods "to employers against whom the strike was still in progress," it ordered the strike resumed.

In retaliation Sitomer obtained a restraining order in January, prohibiting the union from interfering with his operation and "from intimidating any one who desires to work for him."  His affidavit charged that despite the fact that the workers were all female, the union had "threatened the strike breakers with injury and death" and had committed "many actual assaults."

Sitomer was also highly displeased with moneyed socialites, in particular Anne Morgan and Alva Belmont, for providing financial support to the strikers.  Both women were fervent early feminists. Sitomer was decidedly not.

The New York Times, on January 11, 1910 said his affidavits claimed that the strikers "have 'no respect for the law and no fear of the police, because of their female sex,' and because 'they have won the sympathy of wealthy women who pay their fines and obtain their release when they are arrested for breaches of the peace.'"

Later that year, in June, Sitomer sued a number of women whom The Times called "prominent figures in the 'votes for women' movement" to recover $50,000 damages he suffered because of the strike.  Among them was Alva Belmont.  The action, naturally, drew wide attention in the press.

That same month on Friday June 17, an elderly jewelry vendor, Moses Sachs, was robbed of $3,000 in jewelry and several hundred dollars in cash, strangled and stuffed alive into a trunk.  His body was found the following morning in a hallway.  A description of the trunk was sent out by the police and it drew the attention of Jacob J Eichner.  He recognized it as coming from his store.

Eichner gave authorities all the information he could.  On June 21 The Times said that he "sells the trunks wholesale...to about 200 Jewish and Italian dealers throughout the city.  Owing to its gaudy appearance this style of trunk, known to the trade as 'Style 23,' is popular with foreigners, particularly Italians."  His information led detectives to the Lower East Side where street peddlers were plentiful and where the body of the murdered jeweler was found.

The following year The Insurance Press reported that a small fire had caused about $15,000 in damages to the National Novelty Clothing Company on January 27.  Nathan Epstein was ordered by the Fire Department to make repairs to a faulty stove which had caused the fire.

Less than two weeks later, on February 8 another fire broke out in the shop, this one causing about $30,000 in losses to stock and equipment.  This time Assistant Fire Marshall Samuel E. Willis looked closer into the matter.  On May 1, 1911 The Times reported that Epstein "was arrested at his home...yesterday, charged with arson, and locked up in the Tombs."  The article noted that "Mr. Willis learned that Epstein collected a large amount of insurance.

After tinkering with an idea for nearly seven years and making over 300 models, George H. Rives obtained three separate patents for his Rives Holdfast Finger Cot.  He moved his new operation, which made and sold only the one item, into Nos. 39-41 Walker Street in 1913.  A forerunner of today's "rubber finger" used in offices everywhere, the rubber gadget enabled speedy flipping through paperwork and envelopes.

Rives said in an advertisement that the idea "came to me about two years ago while mounting a horse.  I noted the saddle did not turn, and also that the circulation in the animal was not affected, otherwise he would not have lasted very long."  He promised that using a Finger Cot eliminated the need to "spit on your fingers" thereby avoiding tuberculosis and "other dangerous diseases."


The New York Suit Case Co. remained in the building well into the 1920's.  By then the Ford estate had sold the property to the colorful Ray Wilner Sundelson.  Born in Russia in 1874, she became the first woman general agent of the Equitable Life Assurance Society and a member of its Board of Managers.  She earned the sobriquet "The First Lady of Life Insurance."

By the mid-1930's Astrup Co. took up much of the building.  Based in Chicago, it dealt in "flame-proofed and unflame-proofed canvas and muslin" and catered mostly to the theater trade.  Its sturdy fabrics were used for stage sets.  In 1939 the firm purchased the building and would stay until about 1961.

The building was the scene of a frightening event on February 18, 1975.  Harry W. Whatley was serving two concurrent one-year sentences for attempted bribery and perjury.  He had only a few months left to serve when he was taken to the Criminal Courts Building on Centre Street early that morning.  Suddenly he bolted, racing through traffic with the officer in pursuit.  Then he disappeared.

For almost two hours an army of 50 police officers carrying automatic rifles searched the area for the 29-year old.  He was tracked to No. 39-41 Walker Street by Captain McPherson, who had been with Whatley when he ran.  Rather than call in the troops, he said that he "vainly tried to coax him into surrendering."  He explained "I knew the inmate and I figured I could talk to him.  But he said he wasn't going back."

Coaxing did not work and Whatley managed to escape from another exit.  Around 10:20 a.m. Captain George McClancy ended the search.  "It's over," he reportedly said, "He's gone and we're satisfied that he is not in any of these buildings."

At the time of the daring escape galleries, boutiques and restaurants were taking over the factory spaces of Tribeca.  In 1976 Miriam Berns opened her dance space Studio 505 on the second floor.  Then in 1990 the upper floors were converted to "class A apartments with home occupation."

photograph by the author
Posted by Tom Miller at 2:39 AM