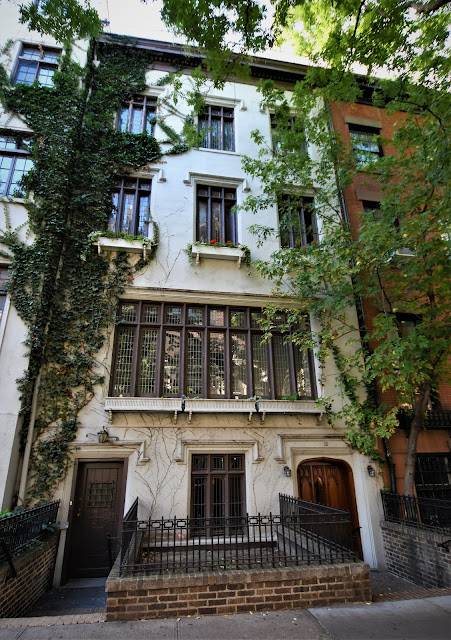 As the blocks between Fifth and Sixth Avenues just above Washington Square developed in the 1840s, the Jackson Marine Insurance Company embarked on a speculative investment project.  In 1845 the firm erected three matching, upscale homes at Nos. 32 through 36 West 9th Street in the fashionable Greek Revival style.

Three stories tall above high English basements, the brick-faced homes were trimmed in brownstone.   The year that the homes were completed First Lieutenant Robert Anderson was fighting the Mexican-American War.  Already a seasoned veteran, the 40-year old had served in the Black Hawk War of 1832 and the 1835 Second Seminole War under General Winfield Scott.

In 1855, because of wounds he received in battle (and his connections to Scott) Anderson was assigned to light duty inspecting iron beams manufactured in Trenton, New Jersey for Government use.  On October 5, 1857 he was promoted to major of the 1st Regiment of Artillery.  It was about this time that he moved into No. 32 West 9th Street, near his former commanding officer.  General Scott was by now living at No. 24 West 12th Street),

Anderson's relatively quiet life would be short-lived.  Following South Carolina's secession in December 1860, he was appointed commanding officer of the US Army forces in Charleston.  Although he was born to a wealthy slave-owning family in Kentucky and was vocally pro-slavery, he never wavered in his loyalty to the Union.

Major Anderson moved his garrison into Fort Sumter.  It was the first target of the new Confederate President, Jefferson Davis, who ordered the fort to be captured.  Ironically, the Confederate attack on April 12, 1861 was commanded by Brigadier General P. G. T. Beauregard, who had been a student of Anderson at West Point.


The events at Fort Sumter made Robert Anderson a national hero and a symbol of Union resistance.   The week after the battle he arrived in New York to great fanfare.  A New York City policeman had already traveled to South Carolina to escort Mrs. Anderson back home.  Anderson was center-stage in the massive pro-Union rally in Union Square on April 21.  He carried the flag that had flown over Fort Sumter.

The following month, on May 15, he was promoted to brigadier general.   Beleaguered after decades of battle he retired from military service on October 27, 1863.  His discharge explained "for Disability resulting from Long and Faithful Service, and Wounds and Disease contracted in the Line of Duty."

In April 1865 Anderson was at home at No. 32 West 9th Street when a telegram arrived from the Secretary of War Edward Stanton asking him to raise the old garrison flag over Fort Sumter in a ceremony scheduled for the fourth anniversary of Anderson's departure.   The impressive ceremony took place on the afternoon of April 14.   The celebration was tarnished when President Abraham Lincoln was assassinated only a few hours later.

The New York Herald mentioned the aging officer later that year, on November 12.  "Robert Anderson, now retired, may be seen occasionally in Fulton market with his basket on his arm, still strong and hale, though gray and a little bent, or on Broadway with a step that has not lost it martial tread."

But Anderson's health was failing.  He and his wife soon moved to Nice, France, in hopes of restoring his health.  He died there on October 26, 1871.

The Anderson's 9th Street house became home to Madame Grenier's dressmaking establishment.  High-end shops like hers were often quietly nestled within upscale neighborhoods with little or no outward signage to intrude on the residential surroundings.  An advertisement in The New York Herald on October 27, 1872 read "Mme. Grenier does Dressmaking in all its branches in the latest Paris style.  Charges are far less than other first class, reliable dressmakers.  No sign."

In the midst of the winter season of 1873, The New York Herald commented that the women of high society were busy shopping for "evening dresses, dinner dresses, ball dresses, fancy dresses, walking dresses and riding dresses."  The writer said "We have never seen the rooms of the modistes more crowded than they were yesterday or a greater variety of beautiful fabrics on hand."  The article specifically pointed out Mme. Genier's as an example.

Madame Grenier seems to have leased upstairs rooms.  In June 1873 an advertisement appeared in The New York Herald that read "A French Teacher wishes to find an engagement to teach during the Summer; perfect reference;" and on Christmas Day that year another ad read "A lady who is a first class musician, desires a resident engagement; teaches Piano, Singing, English, French, German, Italian, Drawing and a thorough education."

Madame Grenier stayed on at No 32 for years.  In the spring of 1874 she advertised "elegant Walking, Evening and Reception Dresses, trimmed in the latest Parisian style."  And the following year, in October, she was looking for "A French lady as saleswoman--one who understands thoroughly about dresses and laces; no objection to leave the city."

Her insistence that the potential employee be able to travel suggests that Madame Grenier followed her patronage to fashionable resorts like Newport or Bar Harbor in the summer months.  Without that flexibility, society dressmakers would have no clients while the wealthiest citizens escaped the city's oppressive heat.

The dressmaking shop was gone by 1885 when No. 32 was once again a private residence, home to F. G. King.   Within the decade William Greenough moved in.  Born in Boston in 1843, Greenough was a graduate of Harvard College, and ran a dry goods business in Boston until 1879 when he came to New York City.

He was by now a partner in Patterson & Greenough, a trustee of the Teachers' College, the New-York Free Circulating Library, and of the Charity Organization Society.  His involvement in those educational facilities caught the eye of the mayor and in November 1896 he was nominated as a school commissioner.

Greenough and his wife, Alice Mary, had five children, Alice, Marianne, William, Edith and Carroll.  Alice Mary died at the age of 48 in 1897.   Three of the children were at least 20 years old at the time; but Edith was 16 and her brother, Carroll, was 14.  While a staff of servants would help in the rearing of the teens, Greenough would have the uncomfortable duty of hosting the debutante entertainments of his daughter.

Introducing a young woman to society was the eagerly-anticipated responsibility of mothers.  Teas, receptions or dances required a thorough knowledge of protocols normally the bailiwick of the female sex.   Nevertheless, Greenough bravely forged into uncharted territory.  On December 8, 1900 the New York Tribune reported that he would give a tea that afternoon for Edith.

By 1912 J. Clawson Mills was doing a thriving interior decoration business based in Brooklyn.  In 1912 The J. Clawson Mills Co. advertised "Whether you have in mind the idealization of a single corner in one room, of the creation of an entire establishment, you should write today."

In 1917 he purchased No. 32 West 9th Street and laid plans for a thorough transformation of the out-of-date Victorian.  In April his architect, Hugo E. Magruson, filed plans for $9,000 in renovations, including "studio, sun & sleeping porch, doors, windows, partitions, stucco front."

The completed make-over left little hint of the home's Greek Revival origin.  Magruson placed square headed neo-Gothic moldings above Tudor-style openings.  A handsome window at the second floor extended nearly the entire width of the structure.  The Gothic door of the main entrance contrasted with the more severe door to the service entrance with its heavy strap hinges. 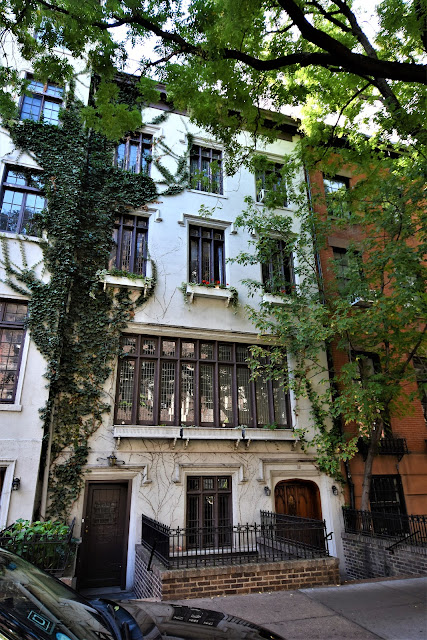 On April 15 1940 the 80-year old decorator died in the 9th Street house.  His will gave a large amount of his fortune to the Metropolitan Museum of Art and the Architectural League.  That money was "to be used in providing scholarships to be known as the J. Clawson Mills Scholarships in music, architecture, painting, sculpture or other branches of the fine arts," according to The New York Times on May 9, 1940.  The J. Clawson Mills Fellowship continues to be awarded by the Metropolitan Museum today.

Albert M. Shannon received a life income from $2,500 (about $428,000 today) "and specific art objects;" and Percy F. Emory received $4,000.  Surprisingly, the valuable art collection did not go to the Metropolitan Museum of Art, as some might have suspected, but to an executor, John McLaren Strong. 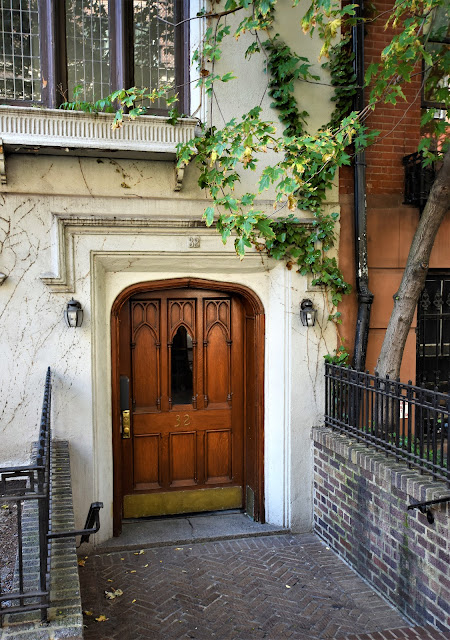 The house was included in Mills's estate and was sold to an investor later that year "for altering into apartments," according to an announcement.   A renovation, completed in February 1942, joined No. 32 internally with No. 30 next door and resulted in four apartments on the lower floors, with three on the top floor.

Among the first tenants was Joseph P. Lash who was 32 years old in 1942.  As an advisor to the Young Division of the Office of Civilian Defense he had become what The New York Times deemed a "protege of Mrs. Franklin D. Roosevelt."  But his other affiliations raised eyebrows just months after the attack on Pearl Harbor.

On January 24, 1942 The Times reported "Mr. Lash has appeared several times before the Dies Committee on Un-American Activities.  His last appearance was on Thursday night."   His claim of 1-H status (being over 28 years old) made him illegible for the military service.  It did not, however, gain him much sympathy in the eyes of the patriotic public.

He was instructed to appear before Local Board 19 for possible reclassification.  On April 2, 1942 The Times reported that Lash was "ordered to report for induction into the Army as a private on April 13."

Other than the remarkable 1917 facade of No, 32, the combined houses drew little attention to themselves for the rest of the century.  They received updates in 1962 and 1976; neither of which fussed with Magruson's fairy-tale design.  As it did when J. Clawson Mills moved in, No 32 still causes passersby to pause and enjoy.