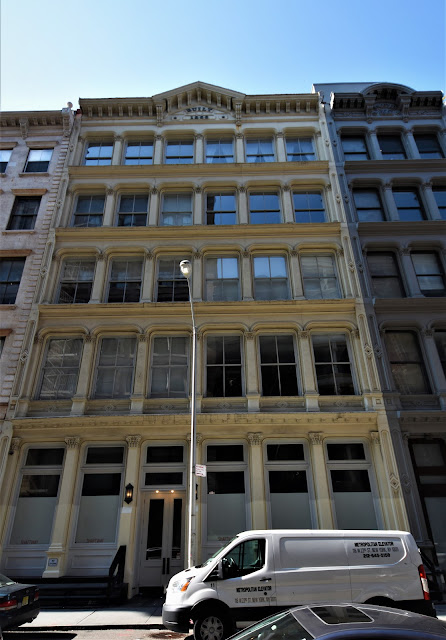 In 1846 Daniel D. Badger moved to New York City with his innovative concept of prefabricated cast iron facades.  The idea caught on--especially in the districts that would be later called Soho and Tribeca where commercial buildings were rapidly taking the place of three-story brick houses.  Among the architects who embraced cast iron was Isaac F. Duckworth.

Duckworth was prolific in the downtown area, sometimes acting as both architect and developer.   He was commissioned in 1866 by Pierre Keff Francis (who by now had Anglicized his name in directories as Peter) to design a five-story loft building on the site of the two three-story structures at Nos. 46 and 48 Lispenard Street.  Francis listed his profession as "tailor."  His home address on 32nd Street, just off Fifth Avenue, and this ambitious building project suggest his was an exclusive custom tailoring business catering to the carriage trade.

Daniel Badger's Architectural Iron Works manufactured the facade for the French Second Empire style structure.   Unlike some of the elaborate examples pictured in the firm's 1865 catalogue, Duckworth had designed a comparatively no-nonsense series of flat-arched openings separated by Corinthian pilasters.  Handsome paneled end piers added visual interest.  It was the robust bracketed cornice that stood out.  Here cast lettering announced the construction date within the pediment.

On a side note, when Duckworth was hired later that same year to design a building for Daniel C. Kingsland around the corner at Nos. 315-317 Church Street, he may have pitched a cost-savings idea.  By re-using the foundry molds, Kingsland would save considerable money.  Whether or not that was the motivation, that building, completed in 1869, is a duplicate of the Lispenard Street structure.


Among the first tenants of Nos. 46-48 Lispenard Street was Bradley, Keefer, Welty & Co., dealers in dry goods.   The firm had barely moved in when it was the target of a con man.  On June 8, 1869 fast-talking Isaac Marks walked into the store, saying he represented Marks & Cohen, a company at No. 124 Chambers Street.  He boasted that the firm had cash of $23,000, a "very few debts," and he added that he had a personal bank account with a $2,000 balance.

Marks convinced Edson Bradley that he was preparing to opening a branch retail store in Paterson, New Jersey for which he needed stock.  He walked out having purchased $1,144 worth of dry goods and cloth (nearly $21,000 today) promising to pay within 60 days.   Shortly after the goods were delivered, Bradley, Keefer, Welty & Co. discovered Marks sold everything at auction far below their value.   Edson Bradley had Marks arrested on June 25.  The New York Times noted "The prisoner failed to make any proper explanation of his conduct."

Not long after the incident Edson Bradley, along with his son and son-in-law, took over the partnership, renaming it Edson Bradley & Co.  He was looking to add to his sales staff in 1871, especially hoping to hire those with an existing customer base.  His ad on December 17 read "Wanted--Several experienced salesmen to sell woollens, flannels and blankets; to those controlling a trade liberal terms will be offered."

In 1873 Edson Bradley & Co. moved to No. 495 Broadway.  That year nation was thrown into the most severe financial depression it would endure until the 1929 Stock Market crash.  The thriving firm was ruined and the Bradley men all ended up in jail following a sensational attempt to escape with company funds.

In the meantime, Adolphus Lecour had moved his linens business into the Lispenard Street building by 1871.  The prosperous merchant lived in a fine home on Waverley Place, just off Washington Square.  He was understandably upset when he lost his valuable watch that year  He offered a $25 reward (over $500 today) for the return of his "gold watch (hunting case), with name Adolphe Lecour engraved on the inside."

By 1874 Lucas Thompson & Co., linen dealers, was in the building.   Bad luck seems to have plagued both Thompson and his firm.   In February that year an employee (or possibly Thompson himself) stepped off a Lexington Avenue streetcar leaving a package "containing law papers" on the seat.

Thompson's troubles continued the following February when his wife, Charlotte, sued for "separation from bed and board."  She claimed "cruel and inhuman treatment."  Thompson denied that, admitting only to "occasional exhibitions of temper."

Charlotte was exacting in providing examples.  Once, she claimed, her husband objected to her playing the piano.  When she did not stop "the unwelcome music," he slammed the piano cover on her fingers.  She brought up the time when she asked him to bring her bird cage in from the porch.  The New York Times reported "he refused to be disturbed for that purpose while taking his ease on two chairs before the window outside of which the bird-cage was hanging."   And, she added, "he had shocked her nerves by ringing the door-ball late at night."

The judge, however, was not sympathetic to Charlotte's complaints.  He felt that partners in marriage undertook "to bear the infirmities of humanity" and it was not for the court to "weigh with nicety how far each is to blame in the matter."

Three months later troubles continued when, on the morning of May 19, 1875 expensive "black silk guipure Laces" were stolen from Lucas Thompson & Co.  The firm offered a massive $500 reward for their return.

Lucas Thompson & Co. remained here at least through 1877.  By then S. Brill & Co. had been in the building for at least a year, as had Ehrlich & Steinfeld, "fancy dry goods."

Simon Brill had started out with a small retail dry goods store at No. 327 Canal Street.  By now his firm was a major player in the dry goods business, manufacturing women's apparel as well.  In 1877 the company advertised for experienced sewing machine operators for "ladies' underwear, &c."

Other firms renting space in the building that year were the Independent Comb Co., and and the dry goods operation of brothers Solomon and Moses Hyman.

Serious trouble came to Ehrlich & Steinfeld when its partners, Ferdinand Ehrlich and Salomon Steinfeld were arrested in August 1876.  Their capture came just in time, according to their accuser, William Zimmermann who swore before a judge on August 11 that the men were "about to abscond and depart out of the State for the purpose of avoiding the service of a summons and defrauding their creditors."

Zimmerman was an officer in Dieckerhoff, Raffloer & Co., importers of dress trimmings and dry goods.  The firm had made five deliveries to Ehrlich & Steinfeld that July amounting to $1,311.25, only to find their Lispenard Street offices vacant soon afterward.  Investigations showed that it was a mere fraction of the massive fraud operation which totaled "in the neighborhood of $50,000" according to a newspaper--more than $1 million today.

The New York Times showed no sympathy to the swindlers, saying on August 15 "The firm of Ehrlich & Steinfeld, dealers in fancy dry goods, No. 46 Lispenard street, has come to grief within a few days, an occurrence which it is claimed has happened none too soon for the welfare of the dry goods dealers of New-York."

Interestingly, as the century drew to an end, the dry goods and apparel firms in the building were joined by at least two leather manufacturers.  Adolph Loewenhein was here by 1889 as was Townshend, Baker & Co., harness makers.

Frank Lewis and his sons Joseph and Henry ran Frank Lewis & Sons were here in the 1890s.  Makers of men's apparel like shirts and underwear, the substantial operation employed 92 workers in 1896--6 men, 56 women, and 24 girls and 6 boys.  The staff worked 53 hours during the week and 8 hours on Saturdays.

By now the "notion house" of Berg Bros., run by David and Isaac Berg, had moved in.  The firm imported and dealt in "fancy notions and small wares," a catch-all term that included buttons, snaps, "toilet and hair pins," and millinery supplies.


Among the firm's employees in 1903 was 52-year old Samuel Goodman.  Tragedy struck on December 14 that year when he suffered a heart attack while helping a customer.  The Sun ran the indelicate headline FELL DEAD IN STORE and explained "He had made a sale and was wrapping up the goods when he fell and died."

In 1912 Berg Bros. was cited for employing children under 16 years of age "without Board of Health certificate," apparently what today would be termed a Work Permit.  The firm was apparently little phased and was cited again the following year.

Berg Bros. moved to No. 478 Broadway in 1913.  The building continued to house apparel and dry goods firms until 1922 when the newly-formed Hardware Dealers Building, Inc. purchased it.   Headed by W. H. Sterling, the firm announced its intention "to provide quarters for firms affiliated with the hardware trade.  Extensive alterations will be made."

Then, the firm's president, Samuel Sackett, dropped into Wolfram's shop and happened to notice towels bearing his label there.   He notified police who obtained a search warrant for Wolfram's furnished room at No. 135 East 104th Street.   Not only did they check Wolfram's room, but all 95 of the rooms in that building.  After a five-hour search, they determined that "virtually all of the furnishings in the house" had been stolen from the Grand Union Equipment Company."

On October 30 Wolfram and the manager of the building, Merwin Marshall, were arrested.   In court, the 38-year old Wolfram provided a doubtful resume.  He described himself as "a steel engraver and a captain in the army intelligence service in the World War" as well as a State game warden.  The jury was unimpressed.  It took 10 minutes to arrive at a guilty verdict.  The Times explained how he managed to steal the goods.  "He was accused of having used a rear fire escape to invade the company's plant at night and carry loot away in his automobile."

The year that Wolfram was sentenced to between one and four years in prison the Maplewood Paper Mills was doing business from the Lispenard Street building.  Among the goods it produced were "nurses' Pocket Packages"--portable toilet paper.

At mid-century firms like the Crown Leather Co. were in the building, but by the 1990s Tribeca's renaissance was making its mark.  The building was home now to mostly fashion companies.

Like so many of Tribeca factory and loft buildings Nos. 46-48 Lispenard Street soon became upscale housing.  In 2014 a renovation was completed that resulted in two sprawling apartments per floor,  A duplex addition on the roof is invisible from street level.  The sympathetic re-make preserved the building's appearance of 150 years ago.