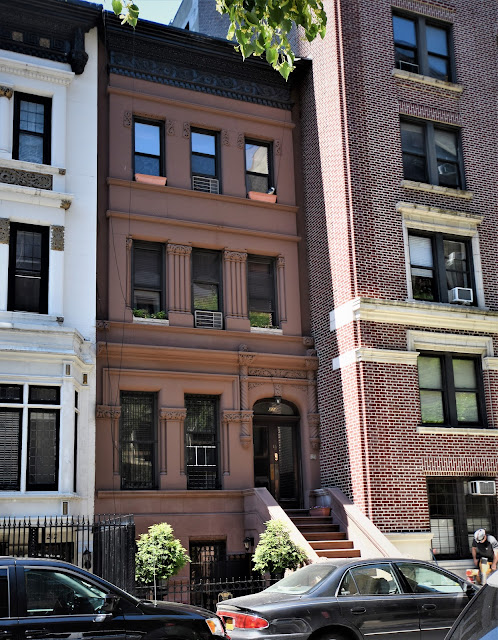 The business run by John H. Edelmeyer and Charles W. Morgan started out as a builders' supply firm.  Having taken over the Mechanics' and Builders' Hoisting Machine Co. around 1882, Edelmeyer & Morgan leased "endless ladders, steam hod elevators and hoisting engines."   Within a decade, however, the firm branched into real estate development.

In the spring of 1891 Edelmeyer & Morgan hired architect George Fred Pelham to design a row of speculative row houses on the south side of West 71st Street, between Amsterdam and West End Avenues.  His plans, filed in April, called for seven "three-story and basement stone dwellings" to cost $12,000 each (about $322,000 today).


Construction on the houses, ranging from No. 212 to 224, was completed in 1892.   Pelham had designed the restrained Romanesque Revival homes with subtle differences arranged in an A-B-C-D-C-B-A pattern.

No. 214 and its counterpart at No. 222 exhibited the medieval elements expected Romanesque Revival.  But Pelham reined them in to create a sophisticated, sedate facade in contrast to the chunky, heavy presence the style so often produced.

The entrance above a high brownstone stoop was especially handsome.  Twisted, engaged columns extended only half-way down from the parlor floor cornice; ending in foliate-carved corbels.  The leafy carvings were like a lacy filigree--a masterful handling of the style which normally was both masculine and beefy.


The pencil-like clustered columns that separated the openings of the second floor shared a single capital.  They were mimicked by single examples in the flanking corners.  The otherwise stark treatment of the top floor windows was relieved by eye-catching foliate ears.  A pressed metal cornice and frieze completed the design.

Henry E. Woodward purchased No. 214 on March 25, 1892 "for about $24,000."  Woodward, who was a partner with Charles H. Knox in Knox & Woodward and owned several other houses in the neighborhood and one on the same block, apparently bought the property as an investment.

Woodward sold the house to Margaret and Thomas J. Drummond in 1898.  Drummond was an architect and builder.  By the time the 44-year old moved his family into the 71st Street house he was the sole partner in the contracting firm of R. Drummond & Son, his father having either died or retired.  He was an active member of The General Society of Mechanics and Tradesmen, serving on its Literary Committee.  Soon after purchasing No. 214 the Drummonds welcomed a son, Thomas Kenneth.

Margaret was the daughter of another builder, John L. Hamilton who, with her brothers, operated as John L. Hamilton & Sons.  (One of them, Thomas, eventually left the firm to enter politics and would become well known as a police commissioner.)

In 1901 New Yorkers were scandalized when they read that Police Captain Gannon had been discovered "in a disorderly resort which he had been vainly petitioned by the residents of his district to suppress."  The polite wordage was readily understood by the public--Gannon had been caught in the back room of a brothel that enjoyed his protection.

Perhaps more shocking, after Gannon was charged with neglect of duty, the Grand Jury refused to indict him.

In October that year Thomas J. Drummond was called to serve on a Grand Jury.  Gannon's release was fresh on the mind of Justice P. J. Jerome and he unloaded insults on the assembled men.  Calling the Grand Jury system "debauched," he berated the process saying in part:

A Justice walks in, hat on head, cigar in mouth, and says to an attendant that a Grand Jury will now be drawn.  A clerk puts a lot of slips with names on them into a box and spins it around.  Then the slips are drawn and a conversation like this takes place:

"John Harsen Rhoades, banker," and the slip is put back again.  "Patrick McDougal, liquor dealer."  "Ah! He's our man," and the liquor dealer goes on the jury.

Drummond and his co-jurors were insulted and incensed.  The New York Times reported on October 18 "The Grand Jurors occupied the larger part of their morning session in discussing what action they might take in regard to Mr. Jerome's remarks."  The headline above the article read "May Sue Mr. Jerome for Criminal Libel."


On October 17, 1911 Drummond died suddenly in the 71st Street house at the age of 58.  Margaret leased space in the house, most likely the basement, the following year to a Dr. Walstall, and by 1913 to Dr. Joseph Eastman Sheehan.

In 1915, while still renting from Margaret, Sheehan invented his "Self-Retaining Retractor for the Submucous Resection of the Nasal Septum."  The apparatus looked as complex as its name sounded.  Sheehan designed it for use during nasal operations "when an assistant is not to be had."


Thomas Kenneth Drummond grew up in the West 71st Street house.  He entered Princeton University in 1918 where he was highly involved in class politics.  He was elected to Class Secretary in 1921, and chosen Chairman of the Undergraduate Schools Committee.

Drummond's Ivy League grooming did not prepare him for the melee that arose when he and five classmates attempted to vote in November 1920.   When they presented their voter registration cards to officials at the polling site, the cards were pronounced "no good because they had not been signed by the Secretary of State."  According to Ralph Gilmore Williamson later, when a policeman overheard him and Drummond say they were going to find a telephone and "call up Prosecutor Garvin," they were told "to stay where they were if they knew what was good for them."

Disregarding the warning, the six young men entered a nearby saloon to use the pay phone.  They were followed by a group intent on preventing that telephone call.  According to the New-York Tribune, "Williamson said he was knocked unconscious by a blow from the fist of a hoodlum in a corner saloon while [Charles] Fraser was trying to get a telephone connection.  The next instant, he said, the air was full of missiles."

Testifying before the Mackay Joint Investigating Committee in Hoboken later, Williamson said "knives, glasses, plates and cuspidors were thrown at them by the gang."  Drummond and his friends "fought their way back to their automobile, tossing cobblestones at their pursuers in retreat."  The boys never managed to cast their votes.

In 1922, the year that Thomas graduated, his mother leased the house to Joseph F. and Mary E. Goble.  Like her previous tenants, Mary was a doctor.  Or claimed to be.

On April 14, 1926 The New York Times reported on 15 chiropractors, "five of them women," who were arrested for practicing without a license.  Among them was Mary E. Goble.  The intimation of the arresting officers was that something more insidious than mere massages was taking place.

Mary was arrested again on April 4, 1928, along with a masseuse, Mrs. Louise Sunkenberg.  This time Mary appeared in court armed with character witnesses.  She brought Rev. Father Cullum, of the Church of the Sacred Heart; Policeman John C. Uminger and, for good measure, his wife; and John F. Kelley, a Post Office superintendent.

Mary was found guilty and given a year's probation.  But she fought back to clear her name.  In March 1931 her lawyer protested to the judge, "You've heard the testimony of Mrs. Gobel here today.  Didn't she impress you as being a perfectly respectable and reputable woman?"  The judge agreed.

"Did it ever occur to you in that court that a good many cases had been framed by the police?" the attorney pressed.  Judge Renaud replied "It certainly did not."

The Times reported that Judge Renaud later asserted "he would give the same verdict again even in the case of a grandmother, Mrs. Mary E. Goble...despite the appeals of a half dozen character witnesses, including a Catholic priest, a nun, a policeman and the policeman's wife." 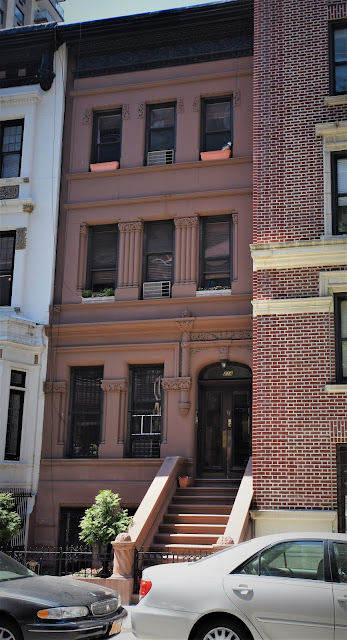 Following the expiration of the Gobels' lease, the house was operated as rented rooms.  Its colorful history simmered down for the rest of the century.  It was converted to apartments in 1976, and survives as the last intact house of George Fred Pelham's 1892 row.