In 1889 wealthy builder and developer Dore Lyon began construction on five upscale rowhouses on West End Avenue, Nos. 340 through 348.  Designed by prolific architect Edward L. Angell, the showpiece of the group was the corner house, No. 340.

Four stories high above a deep basement, the Romanesque Revival style residence was faced in brownstone and brick.  Swirling foliate carvings, chunky colonnettes, and muscular crockets atop the rooftop finials added to the medieval style.  The two-story bowed front on the avenue provided visual movement.   No brooding mansion with shadowy interiors, its abundance of windows on three sides flooded the rooms with natural light.  To the rear of the house was the service entrance, protected by a high wall and entered through an especially handsome wrought iron gate.

Dore Lyon and his wife, the former Anna E. Parker, moved into No. 340, upon its completion in 1890.  Anna was a colorful figure in New York society.  She not only styled herself as a pundit on etiquette; but involved herself in so many clubs, associations and committees that she was dubbed by the press "The Queen of Clubs."

In 1892 the Lyons commissioned architect Charles Israels to add an eye-catching bowed oriel on the second floor directly above the entrance.  Its carved decorations masterfully blended with the originals.  It may have been at this time that the glass and iron enclosed marquee was installed over the stoop, which hugged the 76th Street wall.


The couple had one child, Grace.  In 1893 they erected what one newspaper deemed "a magnificent mansion" as their summer estate in Saratoga, New York.  The following year, in February, they sold No. 340 to Lucius Horatio Biglow.

The apparently busy Biglow was a partner in the highly successful music publishing firm of Biglow & Main; the president of L. H. Biglow & Co., printers and stationery suppliers; president of the Metropolitan Realty Company; and, according to The New York Times later, "Director in a dozen other concerns."  The capacious West End Avenue house made sense for his family.  He and his wife, the former Anna Graham, had seven children, William, Elsie, Ray, Herbert, Elizabeth, May, and Lucius, Jr.

The Biglow family summered in Ridgefield, Connecticut, described by The New York Times in 1893 as "a favorite Summer resort for numbers of New York City people."  Biglow had purchased an 18th century fieldstone house, once the home of Revolutionary War leader Colonel Philip Burr Bradley, and had it Victorianized to a modern "cottage."  Melding his surname with Anna's maiden name, he named the estate with its park-like grounds Graeloe.


Julius Biglow became involved in the issues of the Upper West Side and on April 7, 1899 was accepted as a member of The West End Association.  Among the issues addressed that evening were the "driving regulations on Broadway (Boulevard), now being constantly violated by truck drivers," and illegal dumping of sand and dirt near by the 79th Street dock.


The issue of driving regulations being violated became personal six years later.  Ray, who was 17 years old and already attending Yale University, was home that spring.  He was arrested with two others motorists, charged "with racing their cars," according to The New York Times on April 6, 1905.

The teen was sketchy in the details he gave police, using only his middle name Graham and saying he attended Harvard.  He had shocking confederates in his joy ride.  Twenty-nine year old George Mitchell was the chauffeur to wealthy real estate operator Joseph M. Ohmeis.  He had taken Ohmeis's automobile and riding along were prize fighters James J. Jeffries and "Joe" Kennedy.   Even more surprising was the driver of the third vehicle--James A. Roche, the Chief Inspector for the Bureau of Highways.   Raymond's father apparently put up his $500 bail (more than $14,000 today) and one can imagine the discussion that took place on their way back to No. 340 West End Avenue.

Two weeks earlier the Biglow family had suffered a tremendous shock.  The term "butler" today brings to mind refined, white-gloved men with English accents who announced visitors by delivering calling cards on silver trays.   And, indeed, the duties of butlers in the Fifth Avenue palaces of families like the Astors and Vanderbilts were restricted to such activities.  But in the mansions of the families like the Biglows, the responsibilities were much wider.

James Fahey was the Biglows' butler in 1905.  On March 20 he was cleaning windows on the fourth floor.  Somehow he lost his balance and fell to the rear areaway.   The New-York Tribune reported "Fahey's skull was crushed at the base of the brain."  He died in Roosevelt Hospital that afternoon.


Also attending Yale at the time was Lucius, Jr.  A big man on campus, he was captain of the football team and a member of the rowing team.   Following his graduation he became Yale's head football coach.

On February 4, 1909, the year after his own graduation,  Ray was married to Harriet Chamberlain Moseley in New Haven, Connecticut.  There were two hundred guests at the "old fashioned breakfast."  When it was time for the cake-cutting, the room was surprised when the bride's uncle, Rear Admiral Frank A. Cook, handed her his sword to cut the cake.

The Sun reported "This sword was presented to Rear Admiral Cook by his father when as a boy he first entered the navy.  It was carried by him all through the War of the Rebellion and the Spanish war."  Admiral Cook was captain of the Brooklyn during the Spanish-American War and was wearing that sword at his side when Admiral Pascual Cervera y Topete surrendered to him.

Later that year he had a two story addition constructed on the rear roof.


Spotts was vice-president of H. B. Kirk & Co., liquor distributors, and a partner in the Cantono Electric Tractor Co.  But his fame came from his expert marksmanship.  On November 21, 1910, the same year he bought No. 340 West End Avenue, The New York Times reported on the shooting matches of the Larchmont Yacht Club.

"Ralph L. Spotts carried off the honors of the day, for he not only won the fist prize of the season as high gun with a score of 119, but he also won the ten and five bird scratch events, and the leg for the Sauer gun.  He also won the 200 target match."

A member of the New York Athletic Club, he was on the 1912 American Olympic trapshooting team.   For years his name appeared in sporting magazines like Field & Stream as he continued to add silver cups and trophies to his collection.

In 1916 Spotts branched out, forming the R. L. S. Realty Company.  On April 15 The New York Times reported he had purchased in a single deal five apartment houses valued at about $1 million.

He was still listed at No. 340 West End Avenue in 1920; but his residency here and the status of the house as a private dwelling would soon come to an end.


At the time Thomas F. Clark ran his private school, The Clark School for Concentration, in four buildings at the corner of West End Avenue and 72nd Street.  An advertisement in The Century in April 1920 read: "For Boys and Girls.  Boarding and day pupils; prepares for any college.  An intensive system of individual instruction.  Separate boys' and girl' buildings in fine residential section of New York."   It produced graduates like stage and film actress Ann Dvorak, and actress and off-Broadway producer Lucille Lortel.

On November 20, 1922 the school sold its properties for a hospital project and moved into the five-story mansion at No. 78 Riverside Drive on the corner of 80th Street.  By 1925 the school added the former Spotts residence as a women's dorm.  An advertisement in the Columbia Spectator that year noted "The Dormitory of the Clark School on 340 West End Avenue, can accommodate 22 women for the summer session."

The dormitory appears to have remained at No. 340 until 1940 when the property was sold to be converted to apartments, just three per floor.  The stoop with its unique enclosure was stripped off and the main entrance moved to sidewalk level.  It was most likely at this time that the colorful but out-of-date stained glass transoms were removed. 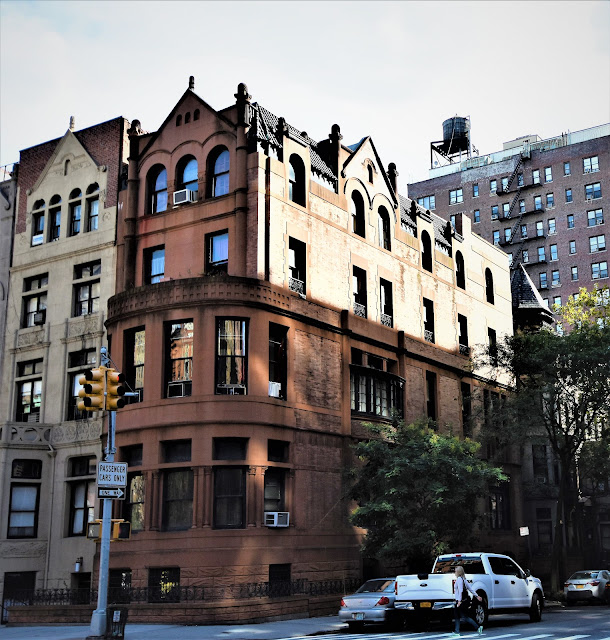 Despite the alterations, the former mansion retains its imperious presence.  Somewhat surprisingly, the stone wall around the basement light moat survives with its wonderful 1890 ironwork.  With little effort the one can imagine a time when wealthy families lived here, catered to by a staff of servants.