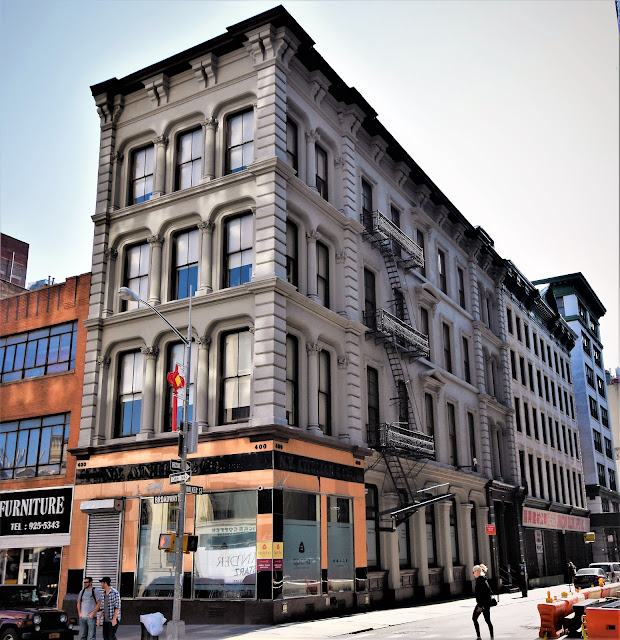 After the outbreak of civil war in April 1861, there was little business-as-usual in New York City.  On the whole, construction projects ground to a halt as blue collar workers left to fight in the South.  A notable exception was the elegant commercial building Augustus (sometimes written as August) Hemenway began in 1862 at the northeast corner of Broadway and Walker Street.

The war was, nevertheless, most likely responsible for the slow progress of construction.  The handsome stone-clad structure took three years to fully complete.   Four stories tall, it was an early example of the French Second Empire style in New York City.  The cast iron storefront mimicked the stone arches and piers above.   Cornices separated each floor and stacks of prominent quoins ran up the corners and also separated the Walker Street elevation into three sections.

The cornice was upheld by paired, stone brackets.  Decidedly understated, given the handsome facade below it, the cornice may have originally been intended to support a stylish mansard roof, appropriate to the architectural style.  If so, however, that element never came to pass.

Hemenway leased portions of the building even while construction continued.  Late in 1862 the National Freedmen's Relief Association had a space here.  On December 14 The New York Times reported "The beautiful set of colors presented by Plymouth Church, Brooklyn, on Thanksgiving day, Nov. 27, to Rev. Mansfield French, on behalf of the First South Carolina Volunteers, will be for a few days on exhibition at the rooms of the National Freedmen's Relief Association, No. 400 Broadway."

Already Northerners realized that the freeing of slaves presented a new list of problems: education, jobs, clothing and other necessities of life.  The object of the group as set down in its constitution sounded simple: "to furnish supplies and funds for the relief and instruction of the freemen."  It was far more than that.

The end of the war only increased the work of the National Freedmen's Relief Association.   Black children were, of course, not admitted to Southern schools so independent schoolhouses had to be built.  And in the devastated South where even whites struggled to find work, former slaves had no jobs.   A notice in The New York Herald on October 19, 1865 pleaded "Unless relieved much suffering must ensue, the means at the disposal of the bureau being entirely inadequate...Industry has been interrupted, and over large districts entirely suspended and thousands of people are utterly destitute."  The article asked for all types of wearing apparel, and said that 35,000 blankets were needed in South Carolina alone.

No. 400 Broadway was erected on part of the site of the old Florence Hotel.  Joseph Dent had operated the saloon in the hotel.  As the ground floor of the new building was finished, he re-established his Dent's Ale Vaults here.


On January 4, 1863 he placed an advertisement in The New York Herald.  "Wanted--A good oyster man.  Apply at Dent's Ale Vaults, late Florence Hotel 400 Broadway, at 10 o'clock on Monday."  But the venture was short-lived.  Four months later, on April 2, he advertised "A lot of beautiful saloon fixtures for sale.  To those about fitting up a saloon this is a chance seldom met with.  Inquire at the Florence Saloon, 400 Broadway."

Joseph Dent did not give up the saloon business.  He moved his operation to Brooklyn, at the corner of Lafayette and Fulton Avenues.

Among Augustus Hemenway's earliest tenants was Charles Richlos.  After leaving work on the evening of June 11, 1865, the wealthy businessman allowed his carnal passions to get the better of his common sense.   He ran into two women on the street who lured him into a saloon.  Their intentions were not romantic.

The New York Times reported on July 4, "It appears that [Francisca] Alreary and one Margaret Early induced Mr. Richlos to enter a Grand-street den...and drugged him there with pothouse wine."  When Richlos regained his senses, he found that his "gold watch, chain, seal, breastpin and hat" were missing.   Francisca Alreary was found and arrested.  At the time of the article Margaret Early was still at large.

By the mid-1870s No. 400 Broadway had filled with firms related to the garment and textile industries.   The second floor was occupied by James Thornton & Co., importers of shirt buttons.  The high-end nature of the company's product was evidenced when burglars "effected an entrance by means of false keys" early on Friday morning, January 29, 1875.   The New York Times reported "The thieves secured 140 boxes of pearl buttons, valued at $1,600, with which they escaped, without leaving any clue to their identity."  The buttons would be worth more than $36,000 today.

The ground floor was home to the George A. Clark & Brother cotton thread store.  The firm's massive thread factory was in Newark, New Jersey.  George A. Clark and his brother, William, came from a long line of thread makers in Paisley, Scotland.  They came to America in 1855, setting up their new operation.  George died on February 13, 1873 at the age of 49.   William now headed the firm, whose Clark's "O.N.T." thread was nationally-recognized.

Victorian businesses were constantly on guard against clever swindlers and con artists; yet they were frequently outwitted.   Such was the case on May 2, 1879 when a well-dressed young man entered the George A. Clark & Brother store and asked permission to write a letter.  He was offered a desk and after 15 minutes he thanked the clerk and left.

Later that afternoon the same man appeared at H. B. Claflin & Co.'s massive wholesale house at No. 157 Broadway.   He presented an order, written on Clark & Brother stationery, for several hundred dollars worth of goods "to be delivered to the bearer."

When he was told that Claflin's policy forbade the delivery of goods to anyone unknown to the firm and that they would be sent to George A. Clark & Brother, he simply agreed and left.  Then he moved on to E. S. Jaffray & Co. where he repeated the ploy.  And once again he was told the same thing.

The following day boxes of goods began appearing at the door of George A. Clark & Brother's store, "much to the astonishment of that firm," according to The Times.   The newspaper noted "Capt. Kealy has several of his detectives looking for the enterprising young man."

William Henning managed the store by the late 1880s.  Like his employer, he lived in New Jersey and was described by newspapers as "a prominent and wealthy citizen of Hoboken."  The year 1888 is remembered for the massive blizzard that crippled the city; but it was also the year of a dangerous heat wave.

On June 23 that year The Evening World ran a front page headline "A SCORCHER" with a sub-headline "Prostrations and Deaths on the Street--The Ambulances Busy All Day--Street Car Horses Suffer-Terrible Effects of the Weather in the Tenement House Districts--The Death Rate Mounting Higher Especially Among the Little Ones."  The article began "Sweltering Gothamites...got out of their beds this morning in a parboiled condition to find the mercury in the thermometer hovering around in dangerous proximity to 80 degrees."  Temperatures that day were predicted to hit 100 degrees in the shade, with overpowering humidity.

Four days after that article the 47-year old William Henning would become another victim of the heat wave.  He had suffered sunstroke on June 16.  Then The Times reported that on June 27 Henning's wife heard a pistol shot and "found her husband lying on the floor of the sitting room with a revolver in one of his hands and a bullet hole in his temple."  The newspaper explained "It is supposed that he had become mentally afflicted from the effects of the sunstoke."

One of George A. Clark & Brother's retail customers was in the same building.  George F. Damon operated his thread and notions store in No. 400 at the time and he stocked his store with, of course, O.N.T. thread.  Damon lived in Port Chester, New York where he invested in real estate as well.  He had built what a newspaper called "five pretty cottages" in Port Chester, one of which became home to him and his wife.  Around 1880 he donated a bandstand in the village square to the community.

Apparently Damon's debts, many of which were due to bad land and stock investments, outweighed even the handsome salary he was promised.   Around 10:00 on the morning of January 20 he walked into Robert Faber's gun store at No. 493 Eighth Avenue and asked to see revolvers.  Damon looked them over for some time, finally choosing a pistol and paying $5 for it.  He asked Faber to load it, then put it in his pocket.

Oddly, rather than leaving he walked to the back of the store, sat down, and began reading various letters and papers from his pockets.  Eight hours later, when it was time for Faber to close his store, he instructed Damon he would have to leave.  According to Faber, Damon responded "I'll go," then put the muzzle of the pistol in his mouth and fired it, killing himself instantly.  Police told reporters "It is supposed that unfortunate business ventures had driven him to suicide."

In the meantime, William Clark was prominent both in Manhattan and in Newark where he lived.  In 1892, for instance, he was the chairman of the committee in charge of the cornerstone laying ceremonies for Grant's Tomb.  By the late 1890s, however, he spent little time in America.  As the head of all the Clark concerns, he went to Scotland when a large thread conglomerate was being formed.  He remained on his estate there outside of Glasgow, spending only about two months each fall in the States.  He died in Scotland on his yacht, the Cherokee, on July 7, 1902 at the age of 61.

At the time of Clark's death, his company's thread store had left No. 400 Broadway.  The entire building was taken over in 1900 by the recently-reorganized Herring-Hall-Marvin Safe company.   The firm resulted from a merger of the Marvin Safe Company, Herring Sage and Lock Company, and the Hall Safe and Lock Company.  For decades its large commercial safes would be displayed in the ground floor store space.

After owning the property for 56 years the Hemenway estate sold No. 400 in November 1918 to the Midcity Realty Company.   That company already owned Nos. 402 through 406 Broadway, giving it control of 107 feet along Broadway and 100 feet down Walker Street.  But if other real estate operators surmised that the old buildings would be demolished for a modern structure, the simultaneous renewal of Herring-Hall-Marvin Safe Company's lease "for a long term" put those thoughts to rest.

Following the safe company's eventual departure, No. 400 once again became home to notions and dry goods firms, like S. Woolman, Inc. "cotton goods," which leased space in 1935.  In 1939 the row of buildings owned by Midcity Realty Company was purchased by Charles F. Noyes.  The combined properties were assessed at $280,000 (nearly $4.85 million today), and Noyes may have surprised Depression era real estate operators when he paid "all cash."

Recognizing the investment potential during the depressed economic conditions, he simultaneously, purchased 14 other properties.  "There is more money in real estate than anything else," he explained.   Regarding the Broadway row, he announced his intentions to "erect new buildings at 402-4-6 Broadway for individual occupancy" and said "The corner, a fine building, will be remodeled."


In the mid-1940s the store was home to Cohen Furniture House.  Textile firms continued to lease space in the building through the rest of the 20th Century.  In 2008 an ambulatory diagnostic and treatment health facility moved into the building. 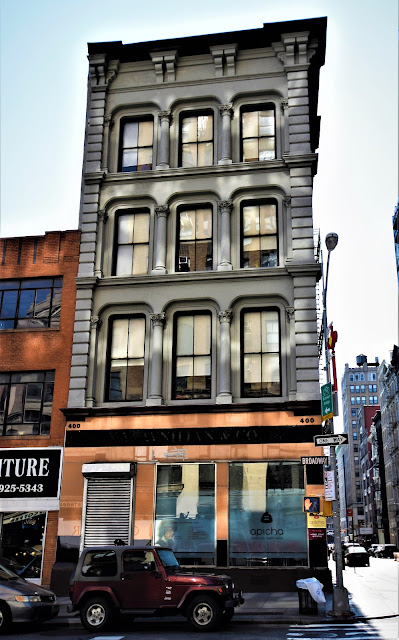 Other than the truly unfortunate storefront on Broadway, the Civil War period structure retains its striking presence.