When the loose network of volunteer fire companies was disbanded in 1865 as the professional Metropolitan District fire department was formed, it was a melancholy day for many of the veteran "laddies."   Among the 41 members of the Lexington Engine Company, No. 7 were a barber, two butchers, a ship-joiner, a horse shoer, and a carriage maker.   On September 18, 1865 the fire department announced that their old fire house at No. 223 East 25th Street would become home to the newly-formed Metropolitan Steam Fire Engine Company No. 16.

When Engine Company 16 took over the building the Kips Bay area was still relatively undeveloped.  But the flurry of construction in the first years following the Civil War brought tenements, stores and small factory buildings.   In the early 1880s the fire department was scrambling to build new firehouses and update or replace the old ones to keep up with the expanding city.

In 1879 Napoleon Le Brun had become the official architect for the fire department.  The following year his son, Pierre, joined him to create N. Le Brun & Son.  The firm filed plans on August 1, 1882 for a replacement fire house for Engine Company 16.  The three-story structure was projected to cost $18,000, or in the neighborhood of $436,000 today.

The completed structure followed the typical fire house pattern.  The cast iron base was dominated by the central truck bay.  The two upper floors were clad in red brick.  As was often the case with their less opulent fire houses, N. Le Brun & Son relied on terra cotta and creative brickwork for decorative effect.  A knobby quilt of terra cotta tiles filled the spandrels above the second and third floors, and the dog-tooth pattern brick filled the arches of the top floor openings.   Above a frieze of floral terra cotta tiles was an unusually deep bracketed cast metal cornice.

As with all fire companies, No. 16 responded to an array of calls.   The fire on the night of July 10, 1899 was especially memorable.  It broke out in the Infants' Pavilion of Bellevue Hospital, described by The New York Times as "ramshackle."

Around 11:00 Miss Abbe, the head of the four nurses in the ward, entered the darkened room to check on a sick baby.  The hospital's location near the East River and the summer heat necessitated the cribs being covered in mosquito netting.  While Miss Abbe tended to the baby, her candle fell over setting fire to the netting.

The Times reported "With a puff the whole netting burst into flames.  The blaze jumped to either side, ran along from crib to crib, and caught the bed linen.  Miss Abbe stood her ground heroically and pulled at the blazing material until her hands were seriously burned."

By the time Engine Company 16 could respond the fire had spread to the adult wards.   Here, too, the mosquito netting quickly caught fire and a civilian, Albert Stone who was a former fireman, rushed in to help, tearing down the netting as Engine Company 16 attacked the flames.  Unfortunately some of the patients were burned.  The Times reported "The injury to the patients may be serious."

The work of fire fighters, by nature, put their lives at risk.  On May 3, 1903 Engine Company 16 responded to a fire in the four-story boarding house at First Avenue and 15th Street.   When the truck arrived 50-year old Henry Williams was trapped on the upper floor and flames could be seen in his room from the street.

Twenty-four year old William McNally scaled a ladder to the window.  The New-York Tribune reported "As McNally got to the top a sheet of flame burst out of the window."  The fire fighter paused, then jumped inside.  A few moments later he appeared with McWilliams in his arms.  The crowd watching from the sidewalk broke into cheers.

Their jubilation was soon crushed.  Just as McNally started to climb out of the window, he was overcome and both he and McWilliams fell back into the burning room as "another sheet of flame leaped from the window."

Firefighter James C. McEvoy clambered up the ladder.  He reappeared in the window with McNally, half conscious, whom he managed to get to the ground.  Now Engine Company 16's foreman, McGarrity, and firefighter Lang headed up for the other victim.   They found McWilliams unconscious and dragged him to another window where there was a fire escape.  On the way down, McGarrity's foot got wedged in a triangular space of the fire escape.  Lang continued down with McWilliams while McGarrity struggled to escape as the flames closed in.

By the time firefighters freed his foot by using crowbars and hammers it was too late.  McWilliams died on the way to Bellevue Hospital.  Both McNally and McEvoy suffered severe burns.

On February 7, 1904 fire broke out in the western part of downtown Baltimore.  It quickly outstripped the abilities of the Baltimore Fire Department and calls for help were sent out to other cities.   New York's Acting Fire Chief Kruger received a telephone call saying "that Baltimore's men were worn out and needed all the help they could get," according to the New-York Tribune.

Before dawn the following morning nine engines and a hook and ladder truck along with 105 firemen, including the men of Engine Company 16 headed south.  The Tribune noted "It was the first time within the memory of old firemen when the department had been called on to send the fire fighters so far outside the city."

Ballation Chief Howe telegraphed Chief Kruger at 5:30 a.m. on February 9 saying "We are now combating the fire on the water front.  All our firemen are in good condition and working hard."

Among those men was Engineer Mark Kelly, of Engine Company 16.  The frigid February winds off the Baltimore harbor made the work even more grueling.  The Evening World later pointed out "He had been on constant duty for twenty-two hours without being relieved at the Baltimore fire."

The inferno was finally extinguished; but not before 1,500 buildings and some 140 acres of Baltimore were destroyed.  The men of Engine Company 16 returned home on the night of February 9.  When they arrived Kelly was so ill he had to be helped home.  He had contracted pneumonia due to exposure.

Kelly was already a hero who had distinguished himself in more than two dozen fires and was credited for saving several lives.  His condition did not improve and on February 26, 1904 The Evening World ran the headline: NOTED FIRE HERO MARTYR TO DUTY.

Kelly received an impressive department funeral.  But then his comrades turned their attention to his pension.  Widows of firefighters who died of natural causes were eligible to $25 a month, as opposed to the one-half salary for line of duty deaths.  Kelly earned $1,600 a year so the difference to his widow and three children would be significant.

The Times reported "Kelly's fellow-firemen believe that the widow will be allowed half his salary as a pension, since the disease he contracted was a direct result o his exposure while performing his duty."   The nation responded as well, The Insurance Times noting "Few public funds created more sympathy or support than did that raised for the widow of the brave New York fireman, Mark Kelly, who lost his life through his hard work in connection with the Baltimore fire."

In July 1906 the department's architect Alexander Stevens filed plans to renovations to the 25th Street station house, including "new reinforced concrete floors and installing iron staircases."  The $15,000 improvements were intended "to increase the floor stability."

The heavy engine of Company 16 was pulled by three strong horses.   The firefighters riding on the front of the vehicle were expected to use what today would be called seat belts.  The importance of the safety feature became tragically obvious on the afternoon of March 28, 1910.

Fireman Joseph White was the driver that afternoon when the company responded to a grocery store fire on First Avenue.   In his haste, White failed to strap himself in.  The engine headed east, but "when the wheels struck a deep rut at First avenue and 23d street White was pitched forward to the pavement between two of the three galloping horses and then crushed under the wheels of the engine."  The horses galloped on until a group of civilians were able to bring them to a halt.

White never regained consciousness and died within ten minutes.  Ironically, the fire, described by the New-York Tribune as "a trifling affair," caused a mere $25 in damages.

The rules of the Fire Department expressly prohibited drinking alcohol while on duty.  Fireman Walter J. Hicks cleverly devised a way around the rules--for a while, anyway.  His undoing cam when Captain Martin Morrison was talking to Assistant Foreman Slowey outside the fire house on August 10, 1911.  They noticed a small boy with a can "such as is generally used to carry beer from saloons," as explained by The Times, go into the house next door to the station.

The newspaper reported that Morrison's suspicions were raised and he sneaked up to the top floor of the fire house with Slowey as a witness, "but stopped on the stairs when his head was on a level with the floor."  Peeking through the banisters, he saw Hicks staring at the skylight.  Suddenly the skylight opened and the can of beer was lowered down on a cord.  "Hicks grasped it and drank its contents with signs of great satisfaction."

Morrison and Slowey quietly went downstairs, but returned later for the evidence.  They confronted the imbibing firefighter who said he "knew nothing about the can."  Nevertheless, The Times explained "the evidence was so strong against him that he was required to give up five day's pay."


Engine Company 16's horses had been replaced by a motorized truck by 1924, when the city was plagued by an arsonist.   When they arrived at a blaze at 23rd Street and Second Avenue at 4:40 on the morning of August 20, it was the latest in more than 100 fires had been purposely set.  The man leaning against the fire alarm box post at that hour of the morning raised the suspicions of Fire Captain Amanuel Goldsmith.  He detained him, then turned him over to Patrolman Murphy.

The young man would not answer the question as to whether he had set the fire.  Instead he rambled on about himself, saying his name was Kenneth Karick and was a horse trainer and former jockey.   While he claimed he had just arrived from Saratoga "with a large sum of money," he had no cash on him "and was unable to tell them what had become of it," according to newspaper accounts.

After much questioning, he finally confessed.  His name was actually George C. Custow, and he told a judge he had "an uncontrollable impulse to set fires" and that he "got a wonderful thrill" watching the firemen and fire apparatus. The 26-year old's father blamed his "aberrations" on "an attack of infantile paralysis which left him a cripple in 1916."

By the 1960s the old fire house was inadequate for modern equipment.  In 1968 Engine Company 16 moved into the newly-built fire house at No. 234 East 29th Street with Hook and Ladder Company 7.

Five years later the city announced the 25th Street fire house would be sold at auction, with an opening bid of $24,000.  The 500 bidders quickly drove the price up, until the Ninth Church of Christ, Scientist won it with a bid of $217,000.   Even the city's Department of Real Estate was surprised, a spokesman saying "we never thought it would go as high as it did." 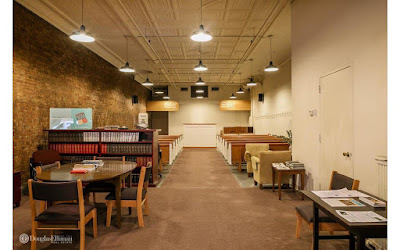 The church made expected renovations to the building, removing the truck bay doors and remodeling the interiors.  The group remained in the building until 2017 when it offered the property for $7.3 million.