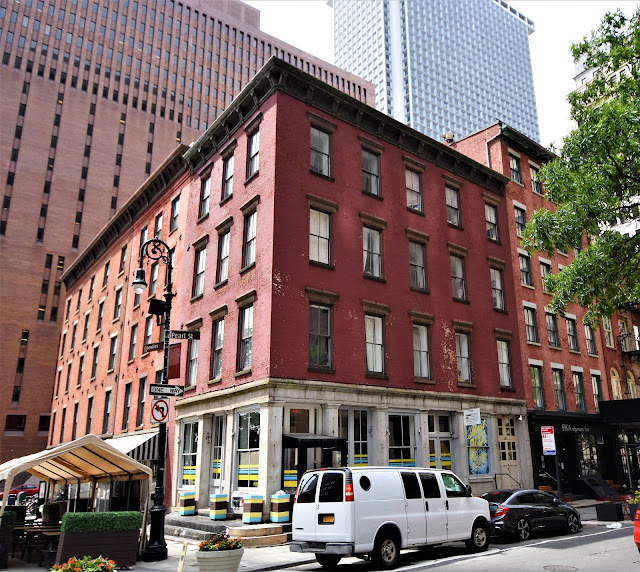 Historic preservation was the last thing on anyone's minds when the Frederick Philipse house was torn down in 1827.   Built in 1689 and located at the corner of Pearl Street and Coentis Slip, the property was ripe for development in the seaport neighborhood.

Surprisingly, a new building was not constructed on the site until 1831.  The upper face of the Greek Revival building was clad in red brick and trimmed in brownstone.  The storefront was composed of heavy granite piers with Tuscan capitals supporting a substantial stone architrave.

James B. Clark and his brother, William, moved their dry goods business into the new building.   Things seem to have initially gone well until six years later the devastating Financial Panic of 1837 swept the nation.

James B. Clark described the dire situation at a meeting of bankers and businessmen on October 24, 1839.  The Morning Herald reported "The large room at the City Hotel was crowded last night with well dressed listeners."   Clark, who was one of several speakers, said "I am no prophet, but if the banks don't relieve us, seven out of every ten merchants will break in the next twenty days; we must have relief in ten, aye in five days, or all burst up; if not, I am content they should write me down as an ass."

Clark's predictions were accurate, apparently saving his reputation but not his business.  When he died on December 21, 1844 at the age of 46, the first floor of the Pearl Street building was home to the hardware store of Isaac C. and C. J. Van Wyck.

In 1842 they had been the victims there of what would seem to today be a petty theft.  It was nevertheless treated seriously.  The New York Herald reported on March 4 "Two black fellows named William Soles and Charles Rankin, were arrested on Wednesday morning by Mr. John Helms, for stealing a quantity of iron hinges, valued at $6, from the store of Isaac C. Van Wyck, No. 1 Coenties slip, and both committed."  The goods would be worth about $180 today.

In the days before illuminating gas, houses were lit by chandeliers and lamps fueled with whale oil.  Having received a new shipment in February 1843, the Van Wycks announced "Important to Families--Pure Winter sperm oil, of the very best quality, of New-Bedford and Nantucket manufacture, can be had at C. J. Van Wyck's Store, No. 1 Coenties Slip, corner of Pearl-street, at five and six shillings per gallon."

By 1853 the former Van Wyck store was home to Chamberlin, Lee & Co., tobacco merchants.   When shipments of tobacco entered the harbor, they were held for inspection.   The recipients were furnished with certificates to claim their goods afterward.  An employee of Chamberlin, Lee & Co. lost five certificates covering five barrels of tobacco in February 1853.  A notice in The New York Herald offered "a suitable reward" for the certificates and warned "All persons are cautioned against negotiating them, as their delivery has been stopped at the Inspection Warehouse."

Among the several tenants in the upper floors in the 1870s was Drake & Colby, produce commission merchants, composed of James Haines Drake and Joseph L. Colby.  Both men were members of the New York State Chamber of Commerce.

Also in the building was W. R. Preston & Co., flour and grain merchants.  Following the brutal murder of William Foster, whose business was across the street at No. 71 Pearl Street, there was concern that bribes were being offered to officials to exonerate his accused murderer.  Preston joined 14 other businessmen in the area who urged Governor John A. Dix to "wholly ignore all signatures, petitions and letters...and decide only on points of law and evidence, such as the corrupting influence of money has not touched."


William R. Preston & Co. lived at No. 27 West 48th Street, the exclusive Fifth Avenue neighborhood of some of the city's wealthiest citizens.   But his highly lucrative business and luxurious lifestyle came to an end in February 1882 when he was forced to declare bankruptcy.

The building that had been home to produce commission merchants for decades saw a new type of tenant in the 1880s: ship chandlers.   Larson, Phillipsen & Co. was here by 1879, joined soon by H. Osmundson & Co., W. W. Thomas, and J. F. H. King.  All were members of the Maritime Association of the Port of New York.

By the time John Dowd, "bags and bagging" merchant, took space in No. 66 Pearl Street around 1913, the historic Fraunces Tavern, at the opposite end of the block, had been restored and dedicated as a museum.  Much discussion had been bandied about concerning plans to demolish the entire block as green space, to be known as Liberty Park.

Instead, the Sons of the Revolution began buying up property around the Tavern with plans to prevent modern development and maintain the early 19th century tone of the block.  In 1966 the City budget included a plan to preserve the block; but no funds were appropriated.  Among the few buildings the Sons of the Revolution had not been able to acquire was No. 66 Pearl Street.


The Uris Buildings Corporation owned both No. 66 and 64.  Preservationists became concerned in May 1974 when scaffolding was erected on the structures.  The New York Times reported "it was understood from sources in the trade that the company intended to raze the buildings to create a parking lot." 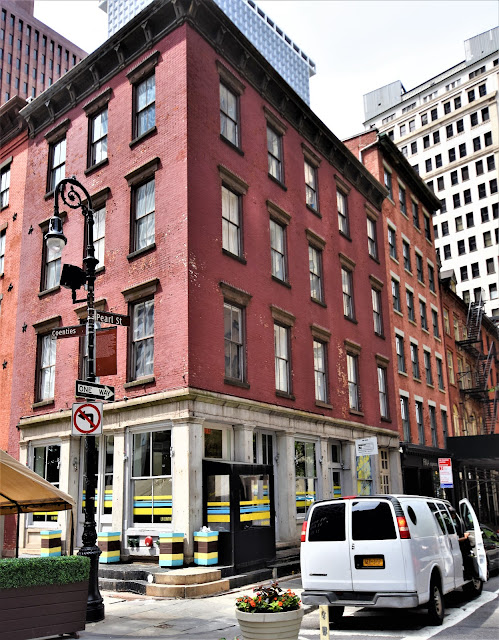 A last minute agreement was reached and the buildings were sold to the Landmarks Conservancy.  Joined internally with No. 64 and Nos. 3 and 5 Coenties Slip in 1982, there are now 42 apartment in the upper floors.  Outwardly, the 1831 appearance of the handsome and historic structure is now assured.