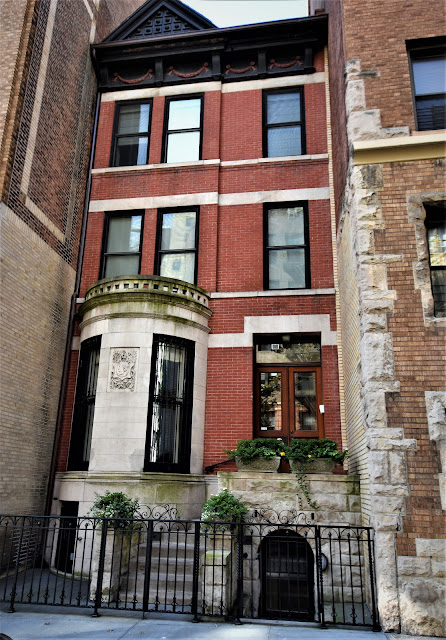 By the 1880s the Upper West Side was feverishly developing.      Mass transit, sewers and paved streets made the area ripe for new home construction and builders like William J. Merritt & Co. scrambled to take full advantage.  In 1888 alone Merritt & Co. advertised 38 new houses:  four on West End Avenue between 73rd and 74th Streets, seven harmonious dwellings on the corner of 75th Street and West End Avenue, and the entire block—27 houses in all—on both sides of 73rd Street between West End Avenue and Broadway (then called the Boulevard).

Merritt had been working on such projects on the Upper West Side for years.  In 1884 he filed plans for another block of homes on both sides of West 75th Street between West End Avenue and Broadway.  Acting as both architect and builder, the bullish Merritt offered the houses to buyers with a money-back guarantee.

No. 244 West 75th Street was one of a group of five completed on the block in 1885.   What Victorian critics might have called "a happy marriage of styles," it was three stories tall above a deep English basement.  The entrance to the basement level, next to the dog-legged stoop, was clad in chunky, undressed stone.  Its Romanesque Revival styling contrasted with the bowed bay of the parlor level, dressed in planar stone and adorned with a bas relief plaque.  The carving depicted a contemporary woman with 1880s hair style surrounded by deftly-carved ferns, oak leaves, roses and calla lilies.

Merritt's blend of styles continued with neo-Grec stone band courses, a neo-Classical pressed frieze below the bracketed cornice, and a Queen Anne pediment for good measure.

Spencer was the principal in Edward E. Spencer & Co., "dealers in findings and shoe manufacturers' goods."  An expert on machinery, he had left his job as a locomotive engineer to join the firm of Crosby, Butterfield & Haven in 1863 as superintendent of its machinery department.  He was also responsible for "fitting up factories" for clients who purchased the firm's machinery.

In 1867 Spencer was made a partner.  That same year the company turned to manufacturing shoe making equipment and shoe components--like insoles, overgaiters, "leggins" and baby shoes.  When he bought out William Butterfield, the last remaining partner, in 1882 Spencer ran the company alone for another five years.

By the time the Spencer family moved into the West 75th Street house, he had taken two partners.  The Boot and Shoe Recorder noted in December 1894 it was doing business not only in the States, but in South America, Switzerland, Japan and other countries.  The magazine said the firm specialized in "fitting out shoe stores with everything except shoes."

Christmas Eve 1891 was especially memorable for the family.  Florence Luella was married in the house that day to Samel Holdens Parsons.  The Spencer house must have been a bit crowded, for The New York Times reported "After the ceremony a reception followed by dancing was given to 200 guests."

The Spencers regularly summered at Lakewood, New Jersey.  But the fashionable resort hotels there were equally popular in the winter season when moneyed families flocked to enjoy sleighing.  A society columnist for The New York Times reported from Lakewood on February 1895 saying "Everything in the form of a sleigh finds favor these Winter days.  Russian sleighs, with silver bells, hobnob with brilliant-colored high-backed sledges that show the early date of their manufacture chiefly in their substantial lines and build."  The article noted several sleigh parties hosted by "prominent people."

Among those arriving at the Laurel House hotel that week were the Spencers.  Just as in the warm months, guests followed a strict routine and social protocols while enjoying themselves.  The article listed dinners, lunches and other entertainments hosted by New York and Philadelphia socialites, and mentioned "The 5 o'clock teas at the Laurel-in-the-Pines must be regarded as filling a very welcome space of time between the daily walk and dinner."

By now Spencer Jr. was working in his father's firm.  He was a member of the jury in the highly-publicized case of Michael F. Considine, on trial for the murder of John J. Malone, in April 1896. According to the New-York Tribune, "Considine shot Malone in front of the St. James Hotel in Broadway on the evening of January 28, 1895, when the two men quarreled about a sum of money which Considine declared Malone owed to him."

Considine pleaded self defense, saying that Malone "threatened to strike him with a cane."  Setting aside the expectation of unbiased reporting, the New-York Tribune added "but he did not pretend that he called out for the protection which could have been afforded by other men in front of the hotel before he drew his revolver and shot his adversary down."

Spencer and his co-jurors acquitted Considine on April 15.  The editors of the New-York Tribune were outraged.  "A number of well-informed men declared that they could not understand how any jury could have acquitted Considine," it wrote and concluded "the just punishment of murderers in this city is becoming too tardy and too uncertain."

Mary Jane Spencer rarely entertained on a large scale, but she was visibly involved in one social club, the Daughters of Ohio.  The women met once a month during the winter season, most often in the drawing rooms of a member or in a large venue, as was the case on May 16, 1903.  That afternoon Mary Jane joined her fellow members at the Waldorf-Astoria.  "After the business session a musical entertainment and reception were given," noted the New-York Tribune the following day.

She did, nevertheless, entertain on a small scale in the 75th Street house.  On March 12, 1905 The New York Times noted "Monday afternoon Mrs. Edward Everett Spencer received informally in her home," and added "She will be at home to her friends to-morrow."  The announcing of when women would be "at home" was highly important for socialites in order to arrange their tangled schedules.

In the spring of 1906 a new club was incorporated, the National Society of Ohio.  Mary Jane Spencer was among its original members and hosted its first event on March 16 that year.  The New-York Tribune noted "An interesting programme has been arranged."

1918 was a traumatic year for Edward Everett Spencer.   On April 4 Mary Jane died.  Her funeral was held in the house three days later.   Then, on June 20, fire broke out in a building downtown that housed one of the Spencer firm's manufacturing plants, now headed by Edward Jr.  The damage amounted to $25,000, around $398,000 in today's dollars.

In 1932 George Lawton, writing in his The Drama of Life After Death, said "A rapidly growing association in New York City is the Independent Associated Spiritualists Supreme Council which at the present writing consists of six churches."  Among those listed was the Temple of Brotherhood, Inc.

Spiritualism had first appeared in New York State in the 1840s, partly an outgrowth of the founding of Mormonism there.  Spiritualists believed that direct communication with God. spirits or angels was possible.

In May 1934 Edward Spencer Jr. and his wife sold the family home to Isaac M. Levy.  He resold it one year later to the Temple of Brotherhood.  The house was assessed at the time at $25,000, just under $450,000 today and a substantial amount during the Great Depression.

The Temple of Brotherhood made alterations which resulted in a "chapel and reading room" on the parlor floor, one apartment on the second, and three furnished rooms and two kitchens on the third.

One of the original upstairs tenants was Grant Williams, a retired police lieutenant with an astounding story.  Williams had retired because of ill health in 1928, but not before changing the course of forensic science.

He entered the NYPD in May 1897, making the rank of sergeant in 1905.  When he was transferred to the detective division in 1911 he was made a lieutenant.  In 1913 he was assigned to the Bureau of the Unidentified Dead, and the following year organized the Bureau of Missing Persons.  He headed that department until his retirement.

Williams's innovative techniques led to his solving "many police mysteries," according to a newspaper.  But the one that stood out was the 1922 case of a skeleton found near Haverstraw, New York.  The New York Times reported "Lieutenant Williams reconstructed a face from the skull, and established the identify of the skeleton as that of Lillian White, a Letchworth Village inmate."

On June 2, 1937 Williams's body was found in his furnished room.  The 65-year old had been dead for at least two days.  Medical examiners blamed his death on "a hemorrhage."

In 1954 the Temple of Brotherhood sold No. 244 to Murray M. Walters, who continued to rent rooms in the building.   It was home to respectable tenants like Edward J. Alpin, who moved in in the early 1960s.

Born in England in 1883, he was ordained a Methodist minister there.  But when he came to the United States at the turn of the century, he founded Alpin, Inc. a painting company.  Then in the 1930s he turned again to religion, devoting all his time to the ministry.  He was pastor of St. Andrew's Methodist Episcopal Church during the Depression, never taking a salary.  From 1950 until his retirement in 1950 he was pastor of the Elton Avenue Methodist Church in the Bronx.  He was still living in a room in the 75th Street house when he died at the age of 82 in February 1965. 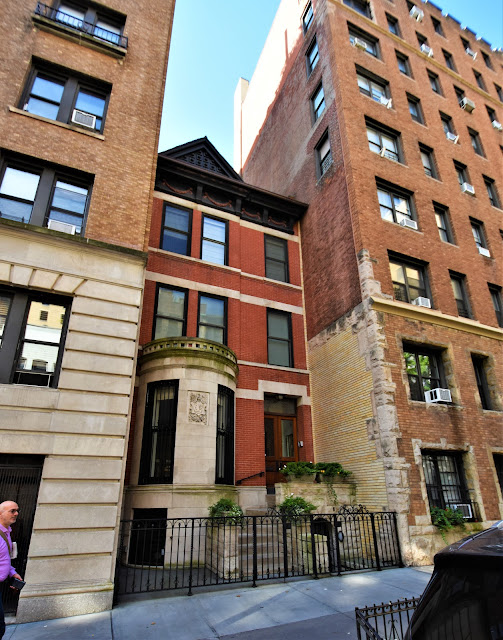 By now the once-quiet block lined with William J. Merritt's fanciful rowhouses had seen the erection of soaring 20th century apartment buildings.  But No. 244 had steadfastly refused to go.  Squashed in between two large structures, it received a renovation in 2006 that brought it back to a single family home.