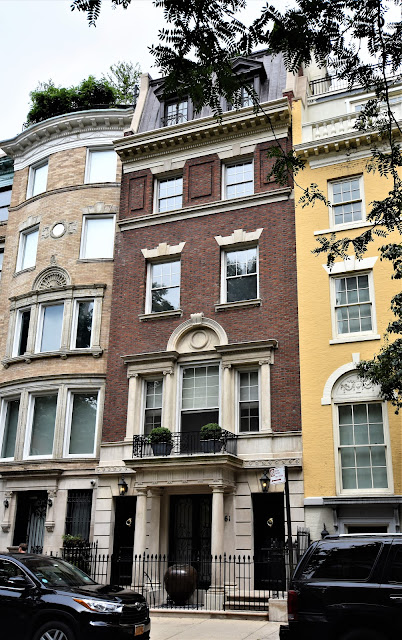 On December 11, 1901 The New York Times reported that Jeremiah C. Lyons had purchased No. 61 East 82nd Street and mentioned "he will reconstruct the dwelling on the American basement plan."  Until recently the high-stoop brownstone, built in the 1870s, had been home to Isidor Mehrbach, a Commissioner of Deeds.

Lyons was well-known in real estate circles.  The prolific developer and contractor was the head of the J.C. Lyons Building and Operating Company.  While he normally produced rows of speculative homes or downtown business buildings, this project would entail updating the single rowhouse.

It could be that Lyons had already negotiated with the Frank family regarding the property.   Only ten days later the Real Estate Record & Builders' Guide reported that Lyons had transferred title to Adolph R. Frank.

Adolph was one of six brothers who intended the remodeled home for their widowed mother, Celia.  Their father, Elias L. Frank, had died in 1891.  The head of the banking and brokerage firm of E. L. Frank & Co., he was also a founder of the Montana Coal and Iron Company with, among others, the millionaire Berwind brothers.

The remodeled house was completed in 1902 and bore no resemblance to its former self.   The stoop had been removed and the brownstone facade stripped away.  In its place was a colonial-inspired modern residence.  The entrance was centered in the rusticated limestone base.  The staid stone portico provided a balcony to the Palladian opening of the second floor.

The Flemish bond brickwork included burned headers which gave the impression of age.  Splayed Georgian-style lintels at the third and fourth floors carried on the colonial motif; and a copper-clad mansard sat above the projecting modillioned cornice.

The 53-year old Celia was not alone in her her new home.  Four of her six sons--Leo, Richard, Walter, and Robert--moved in with her (all except Adolph and Edgar).    Robert was still studying at Harvard University at the time, the alma mater of each of his brothers.

Leo E. Frank was a partner with Adolph in Frank Brothers, a notions business at No. 66 Broad Street.  But his passion seems to have been in painting.   He regularly exhibited in the New York Water Color Club.


Robert Tilden Frank graduated from Harvard in 1905 and then received his medical degree from Columbia University.  He entered Mount Sinai Hospital in 1906 as an adjunct gynecologist where he rose quickly.   In 1912 he became an associate, and pioneered work in women's medicine.  He was the author of several books on female diseases.

It was possibly Adolph's death that sent Celia into a deep depression.   On April 6, 1916 The New York Times said she "for several months suffered from melancholia."  The previous day her nurse had discovered her dead on the floor of the pantry.  Dr. Eli Moskovitz said she had been dead "for some time" before being found, but offered no cause of death.  The Times noted "Mrs. Frank was a member of many Hebrew charitable organizations."

The following year Robert's research would be put on hold when the United States entered World War I.  Robert went to France as a captain with the Medical Corps of the American Expeditionary Forces in France.   Following the war, in 1919, he, Edgar and Leo transferred their interests in the house to Walter.

Walter P. Frank was a lawyer whose offices had been at No. 46 Cedar Street since around 1910.   Never married, he was a loner who enjoyed fishing and hunting trips by himself.  He occasionally wrote articles about those trips for magazines like Field and Stream and Outing Magazine.

Interestingly, immediately after receiving the full title to the 82nd Street house, he moved into an apartment at No. 37 East 60th Street.  Here, according to a neighbor three years later, he "lived a solitary and secluded existence...and had never been known to have a visitor."

On the morning of September 1, 1922 Walter put a gun to his head inside his apartment and fired.  The bullet passed completely through his skull and dropped to the floor.  He died an hour after being taken to Flower Hospital.

By the time Robert Tilden Frank died on October 15, 1949, only Edgar was still alive.  Robert was remembered for founding the endocrine research laboratory at Mount Sinai in 1925, and according to one associate, performing "pioneer work in endocrine research."

In the meantime No. 61 had been home to the Adrian Hoffman Larkin family since 1922.  A lawyer, Larkin was also the chairman of the board of the Virginia Railway Company, the trustee of the estate of Standard Oil magnate Henry Huttleston Rogers, and a director in several corporations.  His wife, Katherine, whom he married in 1891, was the daughter of Dr. Thomas E. Satterthwaite, a well-known physician and author of medical books and papers.

The couple had three children, James, Lawrence and Sarah, and maintained a summer estate in Southampton.   While Adrian was a member of the exclusive Knickerbocker, University, Sportsmen's Meadow and Southampton Clubs, as well as the Downtown Association and the St. Nicholas Society; Katherine was a member of the fashionable Colony Club and was involved in charitable causes like the Post Graduate Hospital.

The last of the children to marry was James Satterthwaite Larkin.  On April 11, 1926 The Times noted "Guests from New York will go to Birmingham, Ala." for his marriage to Lillian Sibley.  In a touching gesture, James asked his father to be his best man.

Katherine and Adrian remained in the residence together for nearly two decades.   Adrian died in the house on February 23, 1942 at the age of 76.  Katherine sold it that December but the new owner, Margaret Foster, never moved in.  Instead, she sold it on March 24, 1943 to "an advertising executive who will occupy it," according to The Times.

The buyer was Murray Breese, head of the marketing firm Murray Breese Associates.  His family's occupancy lasted only until March 1945 when he sold No. 61 to John L. B. Brooke who bought the property "for investment."

Brooke immediately converted the mansion to apartments--one on the first floor, two each on the second through fourth, and one apartment and three furnished rooms on the fifth floor.   Brooke moved into one of the apartments and maintained a second home in Birdsboro, Pennsylvania.

A graduate of Yale, he had served in the American Field Service in World War II in the Near East, North Africa and Italy.  At the same time the former debutante Louisa Geary Ludlow was a director of the American Red Cross canteen at Hickham Field in Hawaii.

Now with the war ended, the two crossed paths romantically.  On October 23, 1946 they were married in Lenox, Massachusetts.  Newspapers reported that "Upon their return from a wedding trip Mr. and Mrs. Brooke will reside at 61 East Eighty-second Street."

It is doubtful that Celia Frank would had approved of the Garden of Graces taking space in her former home around 1973.  An advertisement in New York Magazine on March 19 that year read:

You can Belly Dance if "Zhara" teaches you at Garden of Graces.  The studio for gals who prefer the Eastside.  Weight control and spot reducing with professionals since 1958. 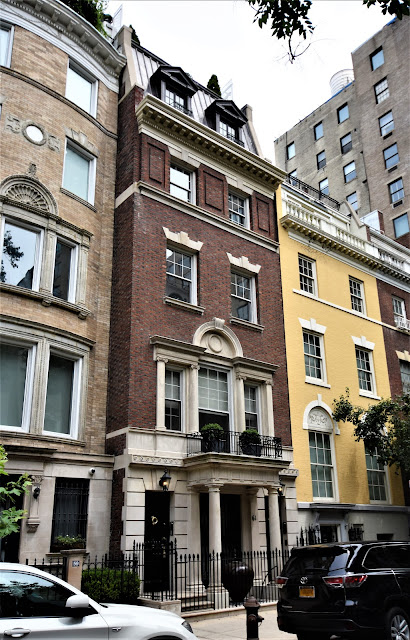 In 2008 the Frank house was renovated once again, resulting in three duplexes (including a new penthouse unseen from the street).