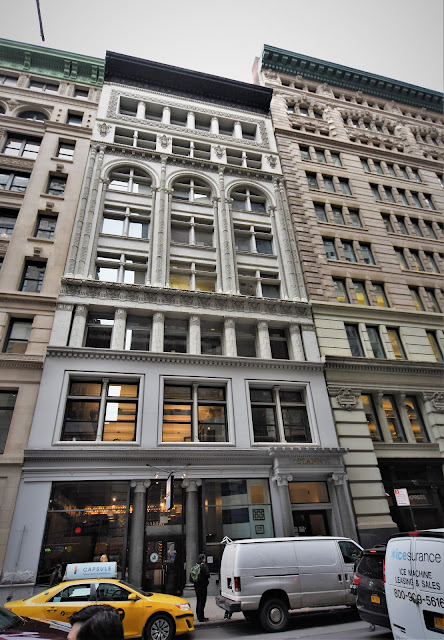 On January 8, 1895 The New York Times reported on a rash of real estate buying and proposed commercial development within a single square-block.  "Real estate men and others have for more than two months past been trying to fathom the mystery of a series of purchases on Sixth Avenue and Eighteenth and Nineteenth Streets, between Fifth and Sixth Avenues."  The newspaper called the series of transactions "the largest ever had in the city" and placed the total at nearly $7 million, not including the value of the structures still to be built.

Most of the properties being gobbled up were old brownstone-fronted houses.   But one deal stood out.  "The St. Ann's Protestant Episcopal Church and rectory were bought by Mr. W. K. Everdell for $192,000," noted the article.  The church was no doubt persuaded to relocate by the windfall it received in the sale--nearly $5.7 million in today's dollars.

Everdell quickly resold the property to real estate developer Jacob Hirsh who commissioned the architectural firm of Cleverdon & Putzel to design a loft and store building.  Hirsch gave a nod to the site's history by naming the new structure, completed in 1896, the St. Ann Building.

By the end of the year construction on the eight-story building was far enough along that the architects had chosen the supplier for its opulent terra cotta decoration.  In reporting on December 14, 1895 that the Excelsior Terra Cotta Co. had received the contract, the Record & Guide noted that their "facilities are of the best."  The firm would have a substantial job in front of them.

Cleverdon & Putzel lavished what might have been a rather routine neo-Renaissance business building with sumptuous terra cotta detailing that drew inspiration from Art Nouveau and Moorish Revival styles.

The ground floor retail space and entrance rejected the customary as well.  At a time when the columns of most storefronts were still being cast in iron, the architects used polished granite and added stylized Ionic capitals that resembled spools of thread.  The entablature of the portico above the entrance to the upper floors was inscribed St. Ann, its projecting cornice embellished with snarling lions' heads. 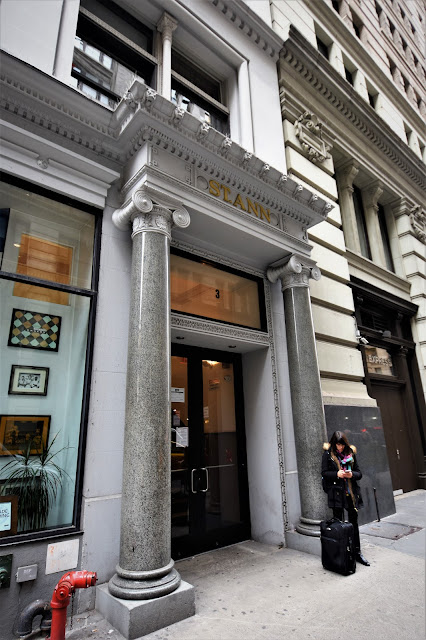 A row of beefy, free-standing fluted columns fronted the windows of the third floor.  They supported an Art Nouveau-inspired freize of garlands and cornucopias.  The fourth through sixth floors featured three-story engaged columns with swirling lines and two-story columns with an intricate basket-weave design which flanked the arches.


The windows of the two top floors were deeply recessed, giving the impression of loggias.  The eighth floor openings and columns were surrounded in a picture frame of intricate terrra cotta.  Above it all was an ornate pressed metal cornice.

Among the first tenants was the firm of William Beverley Harison, which moved in on February 1, 1897.  Publishers of educational books and magazines like The Great Round World--A History of Our Own Times for Boys and Girls, the firm operated its retail shop here.

The store sold not only textbooks, but other school supplies, like "Reading Charts, miscellaneous Reference Charts, Maps, Globes, Blackboards, and School Supplies."  Its opening announcement invited teachers and students "to call and refer to the shelves when in search of information; every convenience and assistance will be rendered them."  It also pointed out that all the books moved from the old store "more or less damaged by removal" would be on sale.

William Beverley Harison remained in the building for years.  Its children's books did not present bunny rabbits and nursery rhymes.  An advertisement in The Kindergarten-Primary Magazine in January 1900, for instance, read:

This is to remind YOU that if you want to obtain the Reminiscences of Baroness von Bulow at the special price made to kindergartners, you much write the publisher at once for application blanks.

Sharing the building was another school book dealer, The Baker & Taylor Company.  Unlike William Beverley Harison, the company was "book jobbers," or distributors of "miscellaneous educational" books.  Its advertisements pointedly noted "We deal in nothing but books."


The two-story store space was leased to the Mason & Hamlin piano and organ company as its showroom.   The firm would sell instruments until late in 1902.

Another tenant in the upper floors involved in publishing was the National Temperance Society and Publishing House.  The group had moved in at least by 1899, printing pamphlets and holding its annual meetings and special lectures and events here.

On January 30, 1900, for instance, a reception for Bipin Chandra Pal was hosted by the National Temperance Society.  Pal was a journalist in India.  Born into a respectable family, his religious "opinions" conflicted with those of his parents and he was "obliged to leave college" in his teens and find work on his own.

He succeeded in editing several newspapers, and was currently working on "lecturing, preaching and writing an elaborate biography of the Empress of India," according to the New-York Tribune.  He was invited to speak at the society because he "understands the Indian temperance question in all its bearings and is outspoken against the local authorities for their administration o the liquor system in India."

In its November 1901 issue The National Advocate noted that the society had issued a "New Canteen Booklet."   Temperance supporters were currently fighting against the availability of liquor in military canteens.  The magazine urged "Every one who may have occasion to discus the canteen question needs this excellent booklet.  It contains enough information to convince any honest man of the iniquity of the canteen and of the advocacy of it both in the army and out of it."

The group was indefatigable in its efforts to stamp out drinking.  It was ignited into action in December 1901 when Albany announced the possibility of new legislature to allow the opening of saloons on Sunday.   An emergency meeting for delegates of about 75 of the "religious, social and temperance organizations" of greater New York was held here on December 2.

Just before midnight on December 31, 1907, just when revelers on Fifth Avenue poised to celebrate the New Year, an automatic fire alarm went off in the P. K. Wilson & Sons store.  Hearing the loud gongs they crowded onto West 18th Street.  The New York Times reported "Hundreds of persons watched the firemen smash in a large plate-glass window when they found the front door inaccessible because of the heavy iron gates across it."

The fire had started in the cellar and although once inside the firefighters made relatively short work of it, the damage was extensive.  "Chief Binns estimated that the loss would reach $25,000, although he admitted that it might be much higher, as the cellar was filled with imported lace."  The damage would equal at least $660,000 today.

Another industry was represented in the building starting in 1916 when The Madison Carpet Company leased the third and fifth floors.  They were joined by P. J. McMorrow carpets in 1922.

For years the Eugene Neumaiser & Co. lace curtain makers had operated from the building next door at Nos 7-9.  In 1923 the firm doubled its factory space by leasing space in the St. Ann Building.  In the mid 1920s until 1934 it was also home to the Kohn & Madden printing ink company.

Perhaps the first real sign that the trendy Chelsea neighborhood was overtaking the St. Ann Building came in 1976 when the Studio Workshop opened its pottery and jewelry making classes here.  But change became obvious when Caffe Roma opened in the spring of 1986.  On April 8 The New York Times called it "the most recent restaurant to tickle the tinsel tastes of the fashion crowd."

The former piano showroom changed personalities quickly in the last decades of the 20th century.  In 1989 it was home to One Club.  Ironically, considering that The National Temperance Society had called the building home, by 1993 the two story showroom became the microbrewery Zip City Brewery.   In March 1994 The Times food critique noted "This brew pub, which makes it own beer, also serves food, including a good hamburger."  The article recommended arriving at "an off hour" when the gleaming copper brewing kettles and "malty aroma"could be appreciated.  In the evening, it warned, the young crowd "turns Zip City into a high-decibel fraternity party."

In November 1997 the brewery became the Tap Room, serving beer "made the Austrian way."  It was the latest in the brew pubs of Salm Brau, a family owned Austrian company with similar pubs in Japan, Brazil, Indonesia and other locations.

The National Temperance Society would have been pleased in the summer of 2001 when City Bakery moved into the former brewery space.  More than just a bakery, the cafe, which is still there, was deemed by New York Magazine "a true original." 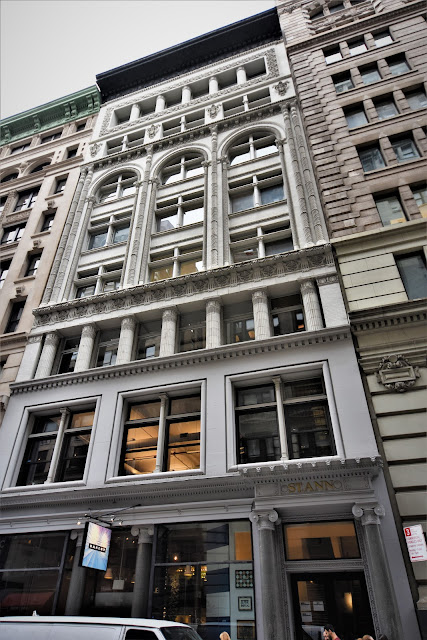 Through it all Cleverdon & Putzel's striking 1896 structure remained wonderfully intact and deserves a pause across the street and a long upward look.