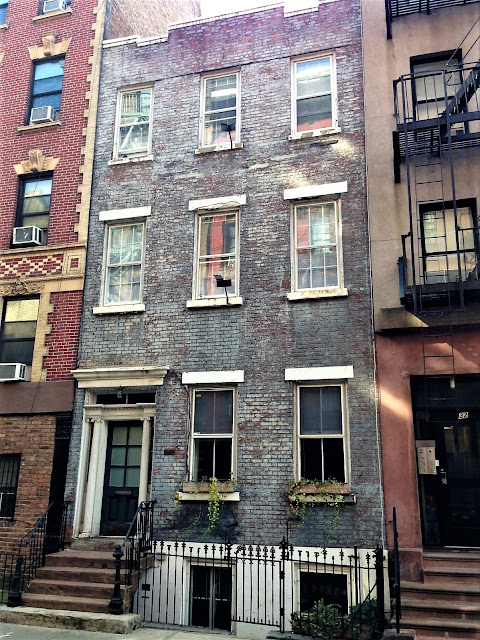 In the 18th century the importing firm of Jacob Le Roy & Son was highly successful and "well-known,"  The head of the firm was described in court papers later as a "wealthy New York city merchant."  He was honored by the naming of the dusty rural road in Greenwich Village in his honor by 1807.

The population of Greenwich Village surged as New Yorkers fled the devastating cholera epidemic that broke out in New York City in 1825.   Unlike many the businessmen who responded by erecting speculative houses; lumber merchant Joseph Hammond built his brick home at No. 30 Leroy Street for his own occupancy.

Constructed by builder John G. Hadden and carpenter Silvanus Gedney, the handsome residence was completed in 1830.  Faced in Flemish bond brick, it was designed in the newly-emerging Greek Revival style.  The squat attic floor replaced the peaked roof and dormers of the Federal style.  The elegant entrance  included fluted Ionic columns, lacy foliate molding and leaded sidelights.  The transom above the doorway was, no doubt, originally leaded as well.


Hammond was involved in Greenwich Village interests and was an active member of the Odd Fellows lodge at the corner of Grove and Hudson Streets.  He moved almost directly across the street, to No. 25 Leroy Street in 1839, selling No. 30 to John and Bartholomew Van Valkenburgh.  Whether the new owners ever lived in the house is unclear; but it was apparently lost in foreclosure in 1845 when title was transferred to the Canal Bank.

Soon after estate attorney Platt Adams purchased No. 30 in 1852 he rented about half of the house.  An advertisement in The New York Herald on March 9, 1853 offered "To Let--To a small family, the upper part of house, No. 30 Leroy street, consisting of the front and back room, and a large bedroom over the tearoom, on the second floor, one room in the attic, and front basement.  Rent $275."

Tearooms, like the one mentioned in the ad, were most often located in the rear of the first floor, surrounded by windows overlooking the garden.  The $275 rent would be equal to about $735 per month today.

The tenants had left two years later, in February, when the portion of the house was again offered for rent.  His first experience at sharing his home may have been a bit nerve-wracking.  This time Adams added a new restriction, seeking a "small family, without children."

Adams sold No. 30 in 1861 to Gabriel Lilienthal who, interestingly, leased it to George Hammond--apparently the son of the original owner.   Hammond's 44-year old wife, the former Mary Dunn, died in the house on Friday, August 25, 1865.  Her funeral was held in the parlor the following Monday.

The next owner was Henry T. Gratacap, a luggage manufacturer, who purchased the house in 1873.   Gratacap had been a volunteer firefighter in the 1830s and is credited with having designed the leather fire helmet in 1836.  His firm manufactured the helmets until 1868 when he sold that business.


Like the previous owners, Gratacap leased the house.  His tenant, Allen R. Jollie, had also been a volunteer firefighter.  He joined Engine Company No. 12 in 1826, and then Engine Company No. 29 in 1828 when he moved to Greenwich Village.  George William Sheldon in his 1882 The Story of the Volunteer Fire Department of the City of New York remembered "Quick and strong, he frequently rolled the machine from the old Watch-house, at Hudson and Christopher Streets, taking it alone on the sidewalk to the first crossing, and waiting for help to get it over the curb-stone."

"Al" Jollie had left the fire department in 1842, but his son Edward continued the tradition as an active member of Hose Company No. 41.

Allen R. Jollie was a well known publisher of music and a manufacturer of musical instruments.  He and his wife, Janet, had nine grown children.


One of them, Isaac, had served as a first lieutenant with the 38th Infantry during the Civil War.  Following his death at the age of 42 on July 19, 1873, his funeral was held in the Leroy Street house.

The family leasing the house from Gratacap in 1887 was named Wheeler.  They receive a scare on the Fourth of July that year when Mr. Wheeler fell ill after eating ice cream.   He was just one of about 80 people sickened, leading to the New-York Tribune's headline: MANY FAMILIES POISONED.

At the time of the article the cause was still under investigation.  One theory was that the dairy product had been allowed to sit too long before being frozen; but another suggested that someone had tampered with the ice cream.  The newspaper reported "But Dr. McIntyre, judging from his own symptoms, had a theory that the trouble was mineral poisoning, and that the poison was arsenic."

By the 1890s Greenwich Village was filling with Italian immigrants, some of whom brought along unwanted criminal traditions.  Detective Sergeant John Antonio Perrazzo "had charge of all the Italian work, and had made several important captures," according to The New York Times.  He and his wife moved into No. 30 Leroy Street.

Perrazzo had joined the force on July 23, 1880.   The 41-year old detective caught a cold on November 17, 1895.  It quickly progressed into pneumonia.  Police Surgeon Cook attended to the officer in the Leroy Street house, but his condition only worsened.  He died five days after becoming ill.

Real estate operators Ennis & Sinnott purchased the house from the estate of Henry T. Gratacap in January 1911.  In reporting the sale the New-York Tribune noted "This is the first sale of the property in thirty-eight years."  The subsequent transfers would be exceedingly more frequent--the title was transferred two more times before the end of the year.

Mary Giannone purchased the house in February 1922 and five years later hired architect Vincent M. Cajano to make major renovations.  He converted the house to a two-family residence and raised the attic to a full floor.   While Cajano made few changes to the lower portion of the facade--even preserving most of the 1830 doorway--the parapet above the new third floor made no apologies for its modernity.

The Giannone family lived in the building for three decades.  In 1939 Matilda Giannone listed it as her address.  She also owned a seven-story tenement and store at No. 190 Bleecker Street a few blocks away.  The Giannones sold it in 1951.

Today No. 30 remains a two-family dwelling.  Although the brownstone basement level has been painted white and gray paint flakes from the brick facade; it takes little imagination to envision the house as it appeared when Joseph Hammond's family moved in nearly 190 years ago.