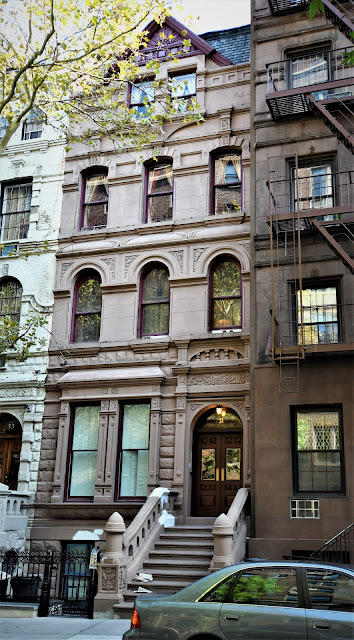 Charles and Anna McDonald were a successful husband-and-wife development team in the latter part of the 19th century, focusing much of their attention on the Upper West Side.  While title to their projects was most often in Charles's name, Anna sometimes took the lead.

Such was the case in 1886 when the pair began construction on a row of five townhouses on West 84th Street between Eighth and Ninth Avenues (soon to be renamed Central Park West and Columbus Avenue).  But although Anna was officially heading the project, The Record & Guide, in commenting on the dizzying pace of construction in the area on August 14, 1886 ignored her.  "Charles McDonald is preparing the foundations for five four-story brown stone dwellings on the north side of Eighty-fourth street."

The McDonalds commissioned architect Henry L. Harris to design the row.  Relatively forgotten today, Harris was busy at the time creating rows of speculative houses.  And like the McDonalds, he worked primarily on the Upper West Side.

The recently-popular Queen Anne style was a favorite of the architect and he used it again for the 84th Street row.  Designed in a balanced A-B-C-B-A configuration, they were completed in 1887 at a cost of $18,000 each, or about $470,000 today.

The the easternmost house, No. 31, matched No. 39 at the opposite end of the row (now demolished).  In its August 1886 article, The Real Estate Record & Guide had noted "one of the characteristics of the building movement on the west side is the large use of rock-faced stone instead of the dressed stone which has been used almost exclusively in the older parts of the city."  Harris took advantage of both for No. 31 West 84th Street.

The basement and parlor levels were clad in rough-cut stone.   The the up-to-the-minute style made itself immediately known at the sidewalk level where beefy bullet-shaped newels sat on pedestals with floral-carved panels.  The first floor facade was a near visual overload.  The arched double doors sat within a paneled enframement, over which was an entablature carved with a rich Renaissance Revival design; and above that was a delightful arched blind balustrade--placed there only for fanciful appeal.  The paneled pilasters of the two-window bay matched the doorway.  The base of the oriel was foliate carved, and a stone hood unified the design.

The upper floors were faced in planar stone.  The arched openings of the second floor were connected by a running cornice, above which were foliate-carved spandrels and false hoods.   While the fourth floor was full-height under a slate-shingled mansard, it gave the impression of an attic with its triangular dormer.


The first owners of No. 31 fell behind on their payments and on February 20, 1894 the McDonalds won the property back in foreclosure at $27,300 (around $786,000 today).   They leased it to a family named Clark.   Their 17-year old son, Walter, let his boredom overtake his common sense on September 14 that year.  That morning he and a friend went to Central Park armed with slingshots.   They shot innocent birds for a time, but after a while, as described by The Evening World, "they longed for larger game."  They found it in Park Policeman Fitzpatrick.

When the officer recovered from the shock of being struck in the ear with a flying pebble, he turned to see the boys running down the entrance path.  Unfortunately for Walter, he was not as fleet of foot as either his cohort or Fitzpatrick.

Walter was nabbed and a search provided all the evidence necessary.  "The boy had his pockets filled with pebbles and a few rubbers," said The Evening World.  He was hauled in to Yorkville Court where he admitted to Justice McMahon that he had been shooting robins, but declined to confess to assaulting the officer.  He also refused to name his accomplice.  The lucky lad was dismissed with a stern reprimand from the judge.

The house soon became home to Mary Judson Lamson, the daughter of the wealthy importer John Sawyer Lamson (who is responsible for the Peabody Museum's collection of pre-Columbian Chiriqui pottery).  Mary, who graduated from Radcliffe in 1892, came from old New England stock.  The Lamson family was descended from William Lamson who arrived in Ipswich, Massachusetts in 1634.

At some point the well-to-do young woman learned nursing, possibly as a hospital volunteer.  The altruistic activity led to romance and ultimately the attention of the press in the winter of 1900. 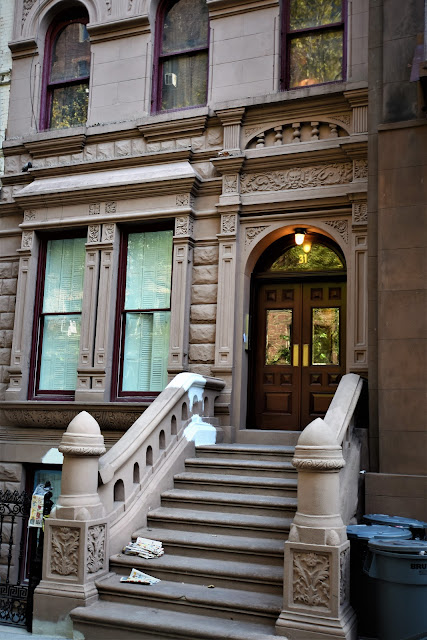 On January 15 The New York Times ran the skeptical headline "Says He Was Gatacre's Scout."  The article explained "Among the second cabin passengers of the American Liner St. Paul, which arrived yesterday was George Clarke, who said that he had been invalided home from South Africa, where he had served as a scout under Gen. Gatacre.  During the engagement at Stormberg in December, Clarke says his horse fell on him, and owing to injuries thus received he received an indefinite furlough."

The newspaper seems to half-heartedly believed the man's story.  "Clarke, who wore enamel boots, a khaki suit, and white 'fedora' hat, said he was a Second Lieutenant, in Gen. Gatacre's mountain scout contingent.  He added that he was going to see a friend, Miss Lamson, at 31 West Eighty-fourth Street."  The reporter followed up and knocked on the Mary Lamson's door.  "It was learned that Clarke was there."

In truth, "Clarke" was English-born war hero Captain George Clarke Musgrave.  He may have used his middle name to deflect publicity.  For one thing, he was already famous, and for another, an unmarried man staying in the home of an unmarried, unchaperoned woman was a shocking proposition, the news of which could be devastating to Mary's reputation.

Musgrave already had a remarkable career.  He had, indeed, been injured in South Africa in 1896, but remained as a war correspondent and explorer.  His articles were sent home to appear in periodicals like the London Chronicle.

During the Spanish-American War he was wounded twice, and captured and deported to Spain.  The New-York Tribune wrote later "Escaping from Spain Musgrave went back to Cuba to fight under the American flag.  Wounded in a fight with a Spanish officer, he was brought to this city, and here Miss Lamson nursed him."

Musgrave and his young nurse fell in love.  The Tribune said "They were about to be married when the war in the Transvaal broke out.  Instead of becoming a bridegroom Musgrave again went into the field as one of the volunteer scouts under the Union Jack."

He simultaneously worked as a U.S. Secret Service agent and a war correspondent for American newspapers.  He was awarded a special medal of valor for in 1899.  By the time he reached West 84th Street, according to The New York Times in June 1900, he had also been "a prominent speaker with Col. Roosevelt during his political campaign, and his book, 'Under Three Flags in Cuba,' was well received."

In the same article the newspaper announced "He has recently returned from the front in South Africa to claim his bride and to publish his book, 'In South Africa with Buller."

The couple was married in the drawing room of Mary's grandmother, Mrs. J. D. Hunter, at No. 62 West 93rd Street.  Their honeymoon was extensive and stalward newlyweds even considered adding a side tour to war-torn South Africa.  "The bridal couple sail for Europe after a short trip here, and may extend their tour to Pretoria should communications soon be open," said the article.  While they did not return to the West 84th Street house, the couple did remain in the neighborhood at No. 5 West 83rd Street.

No. 31 became home to Homer W. Hedge, his wife and their daughter Elizabeth.  He had come to New York City from New England as a young man and entered the advertising field.   By the time the family moved into the 84th Street house he was president of the Homer W. Hedge Company.  But it was his other interests for which he was most known.


As early as 1896 he was the commanding officer of the 1st Signal Corps, described by the New-York Tribune as "one of the most important arms of the State military service."  The roll of the corps was to establish and maintain communications during times of conflict.  The Tribune noted "its members must be expert in sending messages by flag, heliograph and telegraph."

In the fall of 1905 Hedge and seven other automobile and aeronautic enthusiasts formed the Aero Club of America.  He was elected its president.  According to Automobile Industries magazine, he was also one of the founders of the Automobile Club of America.

Hedge was just 48 years old when he suffered a sudden attack of typhoid fever in 1909.  He died in the house on September 10.

Charles and Anna McDonald sold No. 31 just five weeks later, on November 16, to Isaac Friend for $21,400 (a little over $580,000 in today's dollars).   Like the McDonalds, he used the house as rental income.  In 1911 he leased it to Mary E. Touhv, and in 1914 Nicholas Bisulka signed a five-year lease.  Bisulka apparently earned income on the property as well.   The September 1915 issue of the Medical Times included an advertisement that read:

Friend retained possession of the property until March 1920 when he sold it to Alexander and Adele Lucas.  The couple immediately hired architect George F. Pelham to convert the house to apartments.

Among the more celebrated and colorful of the tenants over the years would be Paul Frederick Theo Miersch.  The cellist and composer was born in Dresden, Germany and studied at the Royal Academy in Munich.  He came to America in 1892 and became the solo cellist for Walter Damrosch's New York Symphony Orchestra.  In 1898 he was hired as the solo cellist for the Metropolitan Opera orchestra.

In the spring of 1906 Miersch was in San Francisco with the Metropolitan Opera orchestra.  On April 18 the city was struck by the devastating earthquake, followed by the catastrophic fire.  Luckily Miersch and his co-musicians escaped unscathed.

By the time he moved into his apartment in No 31 he had composed several songs and concertos for cello and violin, including his Indian Rhapsody.    He was still living here when he died at the age of 88 on March 3, 1956. 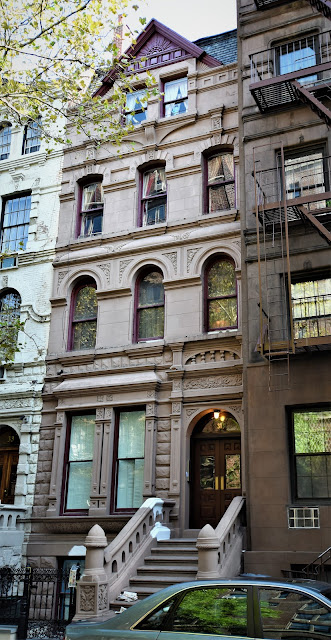 A 2005 renovation resulted in one apartment each on the basement and first floor, and a duplex above.   The roomy duplex was described by a realtor as having three bedrooms "plus maid's room," and den, and two and a half baths.

No. 31 has survived nearly intact, its delightful Queen Anne details forcing us to wonder why Henry L. Harris is so greatly overlooked today.