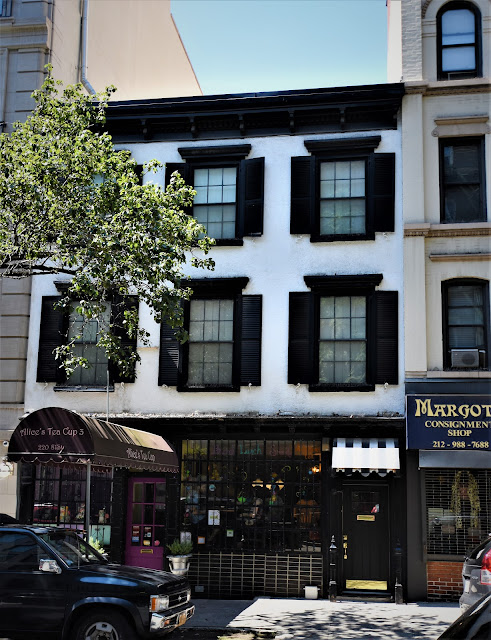 The Yorkville district developed well before many other Upper East Side neighborhoods.  The Boston Post Road cut through the area and in 1837 the New York and Harlem Railroad was extended along what would become Fourth Avenue, and then later Park Avenue.  Early on the hamlet known as Yorkville sprouted.

By 1844 the streets and avenues were laid out according to the 1811 grid plan; replacing the Boston Post Road with Third Avenue.   The decidedly blue collar residents of the growing neighborhood were mostly German and Irish, workers on the Croton Aqueduct and in the cigar factories and breweries being established here.

In the meantime, H. C. Becker & Co. was producing flavoring extracts by the 1860s.  The highly successful business made its owners financially comfortable by the last decades of the century.

About two decades before H. C. Becker & Co. was established, a 25-foot wide house and store was erected at No. 220 East 81st Street, between Second and Third Avenues.  The modest structure was clad in brick and featured Italianate elements like the molded lintels and the projecting cornice with its simple wooden brackets.

Within one or two years Francis C. G. Becker had moved his family into the house and his flavoring extract business into the store.   His son, Frank, Jr., worked in the family business.  The neighborhood, once home only to working class families, was now attracting more moneyed residents.  Becker routinely bought and sold real estate on the side.  The Beckers' uneventful lifestyle was overturned on the evening of October 16, 1890.

The day started out peacefully, with Becker and his son fishing in the Hell Gate section of the East River.  They arrived home around 6:00, had dinner, then the father and son went for a stroll.  And then trouble started.

They turned up Third Avenue and between 85th and 86th Streets, according to Becker, his son "was struck a violent blow on the face from behind."   Frank Becker reacted.  "My son struck back, and I received a blow in return from a man in citizen's clothes whom I found out was Capt. O'Connor."

O'Connor was Captain Richard O'Connor of the Fourth Precinct.  Francis Becker testified later "Officer Keating then seized me by the collar and we were both marched off to the station house.  On the way I saw that my son was suffering, and I said to Officer Keating: 'For God's sake protect my son from that man.  He is my only son.  What have we done to be arrested?'

The Beckers were jailed on charges of disorderly conduct and later fined.  But Francis Becker fought back.   He filed a complaint against Captain O'Connor.  An investigation by Chief Inspector Byrnes found "no grounds for complaint."  But Becker was undaunted.  On March 1, 1891 The New York Times reported "Formal charges were made yesterday by order of the Police Commissioners against Capt. Richard O'Connor" and said "Becker has been so persistent in following up the Captain that the Police Commissioners have determined to put him on trial."

What the Beckers may or may not have known on the night they took their walk was that a labor strike had been taking place against Edelstein's Bakery at No. 1519 Third Avenue.   They had walked into the midst of the turmoil.

According to O'Connor, he was passing the bakery when an employee called him over and said that the boycotters were causing a "great annoyance" to the staff and the customers.  Henriette Riess pointed out Becker and his son as two of the trouble makers.  O'Connor told the court he approached the men to speak to them when "young Becker struck him in the face and knocked his hat off."  He said that when he struck out in self-defense, "both father and son made a combined attack upon him, the elder Becker striking him with his umbrella."  That is when Officer Keating rushed across the avenue to help.

O'Connor's testimony dripped with self-restraint and compassion.  He said that Keating came "with upraised club," but he forbade the officer to strike, "but to arrest."  He positively denied striking Becker or using "any bad language."

Frank Jr. countered on the witness stand saying that he never heard O'Connor restrain Keating; and that on the way to the station house, O'Connor "shoved him violently" saying "You will boycott, will you, you Dutch------!  If it wasn't for the crowd I'd blow your head off.  But wait till I get you inside."

The Beckers brought in eye witnesses, one of whom, Jeremiah Hallahan, said he took "particular notice that the elder Becker's face was swollen and bruised."   But, of course, the defense had its own witnesses.  Sergeant Hoey who was on the desk at the station house corroborated O'Connor's testimony, as did three citizens who lived next door to Edelstein's Bakery.

Most compelling however was a piece of startlingly early forensic evidence.  Becker had the foresight after his release to have his face photographed.   The Evening World noted on March 12, 1891 "A photograph was put in evidence, showing the witness with his face swollen and his shirt and collar torn from his neck."

The 1890s was a time of unbridled graft and corruption among the police.  And so New Yorkers were no doubt not surprised when the charges against Richard O'Connor were dropped and he resumed his duties.

The Becker family moved far from Yorkville, to No. 916 East 156th Street, in 1903.   Benjamin Harrison lived at No. 220 in 1917 when, despite his presidential name, he was committed a very unpatriotic crime.

Harrison was an election official whose responsibility was to count votes.  The election that year was important for New Yorkers, because it would decide who would be the city's mayor.  Harrison favored the incumbent, John Purroy Mitchel, known popularly as the "Boy Mayor of New York."  (He was 34 years old when elected.)

Benjamin Harrison was certainly not alone in his support for the mayor.  Staunchly anti-Tammany, Mitchel was a widely-popular reformer.  The editor of The Nation called him "the ablest and best Mayor New York ever had" and former President Theodore Roosevelt endorsed him, saying he had provided a nearly ideal administration.

But Harrison took his support one step too far.  He changed ballots so that votes cast for William M. Bennett went to Michel.   On April 19, 1918 he was sentenced to five months in prison.  Justice John W. Goff was not only disgusted at Harrison's breach of public trust, but was concerned about the procedure of counting ballots.  He called it "lax" and said "This is a matter of grave public concern and should be immediately attended to."

As the upscale tone of the Upper East Side spread eastward in the second half of the century, the upper floors were renovated to a single apartment in 1964.  The former plumbing store became Rogers and Mongio antiques shop by 1972.  John Rogers and Joy Mongio operated a second store in Southampton.

With the AIDS epidemic sweeping America and devastating New York City in 1992, Out of the Closet opened in the store space.  The proceeds from the nonprofit "thrift shop" benefited AIDS-service organizations.  As Times reporter Cara Greenberg, noted on August 30 that year, "the clutter is top drawer."

In 2004 Craig Wroe in his Living Smart--New York City made note of the dichotomy of donated items.  "The very cramped Out of the Closet Thrift Shop feels like it is really two stores--a thrift shop and an antique emporium."   He noted that in addition to "stuff you'd see in your grandmother's home" were "silver, crystal, china, framed artwork" with prices "on par with local antique dealers." 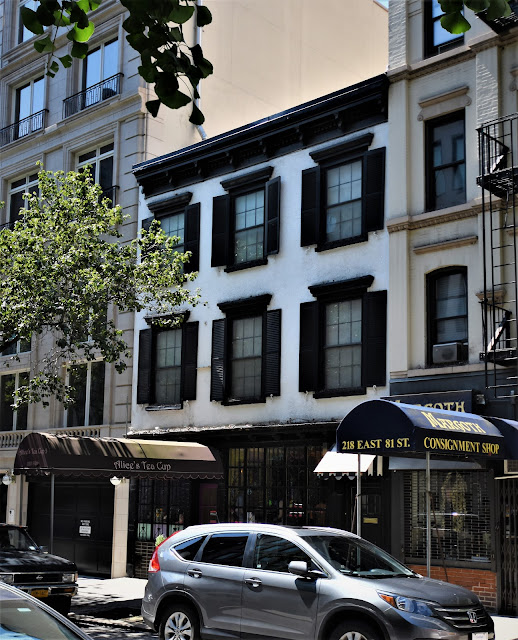 The store remained until 2007 when Alice's Tea Cup opened in the space.  Its founders, sisters Haley and Lauren Fox, tag it "New York City's most whimsical tea house."

A coat of white paint and black shutters give the 1840s structure a particular charm on the block lined with a potpourri of 19th and 20th century buildings.