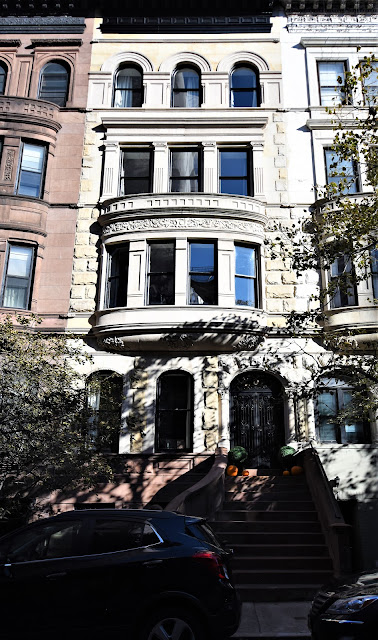 In 1891 construction began on six upscale residences on East 93rd Street, steps away from Central Park.  Designed by A. B. Ogden & Sons in the Renaissance Revival style, they were splashed with Romanesque Revival elements.   The builders were taking a gamble in placing the homes so far north.  At the time the only residence in the neighborhood was the Jacob Ruppert mansion across the street, which had stood in lonely isolation for nearly a decade.

The row was completed in 1892.  Each house was slightly different, yet designed to create a harmonious flow.  No. 5 greeted visitors with a broad brownstone stoop with sturdy wingwalls.  The steps widened as the western wall undulated away towards the sidewalk.


Romanesque Revival made its appearance in the stubby columns flanking the entrance, and in the foliate carvings below the bowed bay above.  Both the parlor and second floors were faced in rough-cut stone.  Renaissance Revival took over in the pilasters and the carved frieze of the bay, before slightly conceding to Romanesque again in the arched upper floor windows.


The house was sold to Isaac Hamburger and his wife, the former Fanny Levy.  Hamburger had come to New York in 1848 and established the tobacco firm of I. Hamburger & Co. in 1855.  Three years later the couple were married.  They had five children, three sons and two daughters.

By now Solomon and Benjamin had become partners in their father's firm.  And they were doing very well.  In 1890, "by the rise in Sumatra tobacco," according to the New-York Tribune, the company made $150,000--more than $4 million in profits by today's standards.

Both Isaac and Fanny were active in Jewish interests.  He was at one time the Supreme Grand Master in the District Grand Lodge No. 1 of the Independent Order Free Sons of Israel.  And Fanny, according to the United States Tobacco Journal years later, "was widely beloved for a lifetime of ardent devotion to her family and charitable work which was closely linked with her husband's extensive Masonic activity."

Wholesale tobacco was a family affair,.  Fanny's brother, David Levy, was head of the tobacco firm D. Levy & Son.  Trouble came in 1894 when that firm declared bankruptcy.  The failure was too much for David Levy, and he died shortly afterward.

Those troubles now spread to the Hamburger family.  Isaac had tried to help his brother-in-law financially and the unpaid loans lead in part to his own bankruptcy.  On March 1, 1895 the New-York Tribune reported that I. Hamburger & Co. "failed yesterday."  Although the Tribune reported that the "general depression in business" was thought to have been the principal cause; it added "The failure of D. Levy & Son, wholesale tobacco dealers a year ago is said to have been one of the causes of the assignment yesterday."

The Hamburgers managed to remain in the 93rd Street house for a while.  In 1896 a lien was filed against Isaac; and finally on May 12, 1898 it was sold in foreclosure to the mortgage holder, Louis Dannhauser for $43,615--nearly $1.3 million today.


Sixteen days later he sold the 21-foot wide house to Benjamin Lowenstein.  Like Hamburger, Lowenstein was a leader in Jewish causes.  He was also a trustee of the Metropolitan Museum of Art.   The Lowensteins had three daughters, Loretta, Emma and Carrie, and a son, Leo.

Benjamin had founded the Nassau Smelting & Refining Works with his brother, Moses.  Located on West 16th Street, it collected and reclaimed scrap metals--essentially an early recycling center.  But their business practices were sometimes shady.  The week before he purchased No. 5 East 93rd Street the Mongolia Metal Co. took out a full-page advertisement in Hardware magazine informing the trade that Benjamin and Moses had been found guilty of trade-mark infringement by stamping "Mongolia" on their bars of metal.  "BEWARE OF FRAUDULENT IMITATIONS" warned the ad.

Seven years later, on December 19, 1905, The New York Times ran the shocking story that Benjamin had been arraigned in the Tombs Court the day before "charged with grand larceny."  Lowenstein had conspired with a storekeeper's clerk for the Erie Railroad to falsify records concerning brass fittings in September 1904.

The Erie Railroad began closely inspecting the books in the first months of 1905, leading to Harry J. Ort's confession.  The fake numbers resulted in Lowenstein's pocketing an extra $1,270 in the deal.  Both men were held on $2,000 bail.  Unfortunately for Ort, his clerk's salary left him in less comfortable circumstances than his wealthy cohort.  The Times ended the article saying "Lowenstein sent his check for $2,000 to the City Chamberlain's Office and went back to his office, while Ort was locked up."

Loretta was the first of the sisters to marry.  Her wedding to Arthur Wallace in the Louis XVI Room of the St. Regis Hotel on November 25, 1909 was a glittering affair.  The Times reported "The wedding ceremony was held under a canopy of chrysanthemums, lilies, and palms, and at dinner after the reception in the marble banquet room the bride sat at a heart-shaped table strewn with white roses."

The family was back at the St. Regis for Carrie's marriage to Harry Groedel on February 21, 1918.   Emma, however, would never be married.  She died on January 2, 1923 while on a New Year's visit to Carrie's home in Newark, New Jersey.

The following year the Lowensteins moved to an apartment on West 110th Street.  No. 5 East 93rd Street became home to the Ryder Henry family.

A Baltimore native, Henry was relatively unknown in New York society at the time of his wedding in 1907.  The same could not be said of his bride, Louise Frelinghuysen Jackson, daughter of the wealthy William Henry Jackson and the former Mathilde Bruce Reynolds Jackson.  Her mother had been presented to Queen Victoria as a debutante.

The marriage took place in the Jackson mansion at No. 556 Madison Avenue, just off the corner of 56th Street.   The guest list that afternoon included names like Shepard, Livingston, and Van Rensselaer.

Henry's pedigree, nevertheless, could compete with his bride's.  He was a direct descendant of the 18th century governor or Maryland, John Henry.  His brother, Clement, married Louise's sister, Adelaide,  When the couple named a son Ryder Henry, it sowed the seeds of confusion in society columns years later.  Ryder's nephew was always referred to as Ryder Henry 2d as he earned social recognition.

Ryder and Louise would have two children.  Louise Frelinghuysen Henry was, obviously, named after her mother; while John Campbell Henry shared his name with his grandfather and great-great grandfather.

Louise's debutante luncheon on November 29, 1927 was far too large for the 93rd Street house to accommodate.  It was held in the Louis XVI ballroom and the Tapestry Room of the Park Lane Hotel.  Her mother scored a social coup when The Times led its listing of guests with nobility: the Countess Alexandrine von Beroldingen.  (Although born in New York City, she carried her ancestral German title, highly impressive to Manhattan socialites.)

The mother and daughter were soon hosting together.  The New York Times announced on November 13, 1928 "Mrs. Ryder Henry and Miss Louise Frelinghuysen Henry of 5 East Ninety-third Street will give a luncheon at the Park Lane on Nov,. 27 for Miss Alexandra Diodati Gardiner, debutante daughter of Mrs. Robert Alexander Gardiner."

The Henry family summered, most often, in Easthampton, and routinely appeared in the society pages rubbing shoulders with the elite.  Louise enjoyed a privileged upbringing, attending the exclusive Miss Nightingale's School, and then St. Timothy's School in Catonsville, Maryland.  As would be expected, she was now a member of the Junior League.

The heiress was, however, apparently in no great hurry to marry.  While other young women in her class often wed a year or two after their debuts, Louise's engagement to F. Douglass Clark was not announced until September 25, 1934.

The wedding on November 28 that year drew headlines.  "Miss Louise Henry Wed in St. Jame's" announced The Times, with a sub-headline "Church is Massed in Blooms."  After a detailed description of the event, the guests, and the outfits, the article reported "The ceremony was followed by a reception at the home of the bride's parents, 5 East Ninety-third Street, which like the church was decorated with palms and chrysanthemums."

Four years later, after suffering an extended illness, Ryder Henry died on October 2, 1938.  He was buried in Cambridge, Maryland.

Louise and her son, who had attended the Berkshire School in Massachusetts, lived on in the house.  When World War II erupted, John Campbell Henry served with an Army anti-aircraft unit in Europe with the rank of lieutenant.  His impressive family background earned him memberships in the Colonial Lords of Manors, the Huguenot and St. Nicholas Societies.

His marriage to Margaret Riker Post on June 11, 1949 in the Church of the Incarnation was a significant social event.

The aging Louise was alone in the 93rd Street house and invited her spinster sister, Margaret Augusta Jackson, to live with her.  Margaret was proud of their lineal descent from French and Dutch settlers.  She had been a member of the Huguenot Society since 1893; serving as its secretary for three decades.  She also served as director general of the Daughters of the Holland Dames, and was a life member of the Colonial Dames of America.

Despite her advanced age, she seemed indefatigable.  She maintained her role as an officer in the Home Garden Society and a registrar of the Colonial Lords of the Manor.  For 35 years she served as secretary for the Society for the Relief of Poor Widows and Small Children. 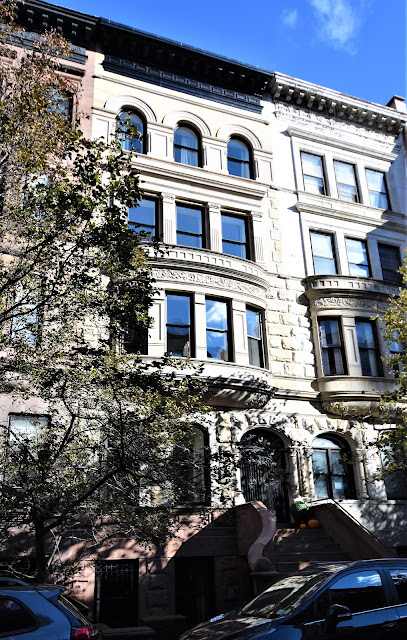 The house became the "upper school" of the Columbia Grammar School.  The school was founded in 1764 in a one-room house by the Battery.  The lower school was housed a block away at Nos. 22-28 West 94th Street.

The mansion was returned to a single family home in 1998.  It was purchased in 2002 for $4.25 million by floral designer Lynn Jawitz who, according to Curbed New York, "set about sprucing it up with marble columns, a royal palace's worth of ornamental molding, and many different patterns of floor." 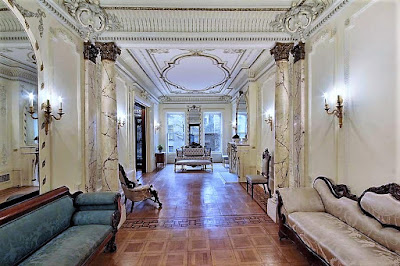 Jawitz put redecorated mansion back on the market in 2011 for $24.5 million.   Perhaps her decorating scheme (resulting in what Curbed New York called a "medieval fairy tale townhouse") was a bit aggressive for buyers, and in 2014 the price was reduced to $20 million.

The Henry mansion is the last of the row to retain its original stoop (the stoop at No. 11 was recreated in 2011).  Outwardly it is little changed, thanks in a great part to the Henry family's four decade ownership.

non-credited photographs by the author
Posted by Tom Miller at 3:31 AM

Email ThisBlogThis!Share to TwitterShare to FacebookShare to Pinterest
Labels: a. b. ogden and sons, carnegie hill, east 93rd street