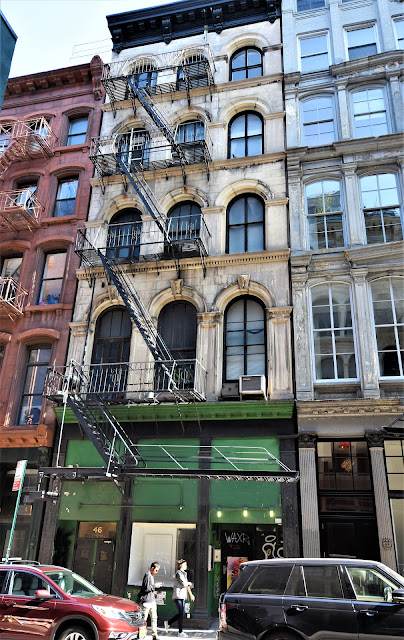 John LeConte was well known within New York City's political and business circles.   On February 22, 1845, for instance, between four and five thousand persons crammed into City Hall Park to express support for the annexation of Texas.  A committee to pressure the Government was suggested and the throng voted Preserved Fish as its president and John LeConte as a vice-president.

LeConte lived in a 25-foot wide home at No. 46 Walker Street at the time.  The following year he was appointed a trustee of the Common Schools of the Fifth Ward.   But within the decade the upscale residential neighborhood would see the gradual invasion of commerce.

Surrendering to the inevitable, in 1857 LeConte demolished his long-time residence and began construction of a modern commercial building on the site.  Completed within the year, the elegant Italianate-style structure was faced in white marble above the cast iron storefront.  The tall openings of the second floor were separated by paneled pilasters and adorned with foliate keystones.  The arched windows on each of the upper floors were connected by continuous sills, creating the illusion of pilasters.  A bracketed cornice completed the design.

The name of the architect has been lost; but his design was not overlooked by Charles Sandford.  The year No. 46 was completed Sandford started construction of a larger structure at Nos. 52-54 Walker just steps away, using the exact design.

LeConte's first tenant was the publishing firm of  W. A. Townsend & Co.   The company walked a thin line in September 1859 when it introduced Out of the Depths: The Story of a Woman's Life.  The subject matter--a prostitute who struggled to regain respectability--was so controversial that the author remained anonymous.

The reviews were carefully worded.   The New York Courier said in part "The story is well told, and though the reader is taken through scenes which may sometimes startle, still there is nothing told that is offensive.  The object of the writer is most commendable."   The New-York Express was positive that the author could only have been a man "for a lady could hardly be so conversant with the phases of life described."   And The Boston Atlas wavered as to whether the book would dissuade young women from becoming "degraded," or tempt them "to try by such exposure."  The critic concluded "We...believe that its perusal ought to do good rather than mischief."

In October 1859 W. A. Townsend & Co. introduced J. B. Lossing's Mount Vernon and its Associates.  Publishers depended largely on door-to-door salesmen and on October 31 that year a W. A. Townsend & Co. want ad promised potential salesmen "$5 to $10 a day can be easily made, by selling Lossing's 'Mount Vernon and its Associates.'"  The advertisement called it "The most elegant book of the year; contains nearly 150 fine engravings and is bound in new and attractive styles."

But the firm's greatest coup to date was the exclusive contract with James Fenimore Cooper.  For years it would published the popular author's works.   In January 1859 it brought out the Pioneers.  The New York Times commented "Cooper's novels will always be considered necessary to the completion of a library, and especially in this country; but this new edition shows that there is still as great a demand for them  for general reading than ever."

W. A. Townsend & Co. cranked out book after book; some heavy illustrated tomes, others light reading.  Among the titles offered in the summer of 1860 were The White Elephant; or, The Hunters of Ava and the King of the Golden Foot; Famous Boys, and how they became Great Men; and William Cullen Bryant's A Forest Hymn.  Three additional James Fenimore Cooper books came out that year:  The Red-Skins; or, Indian and Ingin; being the Conclusion of the 'Littlepage Manuscripts;" Home as Found, Sequel to "Homeward Bound;" and Jack Tier; or, The Florida Reef.

In 1863 W. A. Townsend & Co. was reorganized as James G. Gregory.  The firm continued to publish both light reading and substantial volumes.  On July 20, 1863 The New York Times commented on a new work, Nanette and Her Lovers, saying "The heroine is a Norman maiden, whose steadfast truthfulness to a lover who is unworthy of her, is very prettily told."

Later that year James G. Gregory would unintentionally change the face of American Christmases forever.  On December 19 The Times listed a few of the poems included in the company's Christmas Poems & Pictures.   The article barely noted "Dr. Moore's Santa Claus."

James G. Gregory had hired Thomas Nast to illustrate Clement Clarke Moore's "A Visit from St. Nicholas."   The depictions of Santa Clause until now were based on traditional legends of various countries--sometimes gaunt, sometimes elfin, sometimes monk-like.  But Nast drew his inspiration directly from Moore's poem.


Decades later, in May 1908, Albert Bigelow Paine, in a letter to the editor of The New York Times explained "Moore's Santa Claus was undoubtedly the German Pelze-nicol (fur Nicholas), 'dressed all in fur from his head to his foot,' with 'a broad face and little round belly,' and with 'the stump of a pipe held tight in his teeth'; and it was to illustrate these lines in a book of 'Christmas Poems,' published by James G. Gregory, 46 Walker Street, forty years ago, that the first Nast Santa Claus was drawn."  Paine noted "Mr. Nast himself never doubted his having been the first to present in picture the merry, fat, fur-clad, pipe-smoking Pelze-nicol of his childhood."

James G. Gregory died in October 1865 at the age of 55, ending the tradition of publishers in the Walker Street building.

The firm had for several years shared the address.  By 1862 P. H. & W. Williams was in the building.  The company manufactured the lavish extras so important in mid-Victorian interiors.  Calling itself a "General Trimming Establishment," it made "fringes, gimps, tassels, cords, &c., for Upholsterers and Cabinet makers' use, for Steamboats, Railroad-cars, &c."

Watrous & Burke was already in No. 46 Walker Street in November 1864 when it advertised "For Sale--Five sewing machines of popular makers."

By the following year William Neustaedter was leasing space in the building.  A "dealer in tram, organzine, and spun silk," he and his brother Joseph, would maintain a showroom here at least through 1876.

In the summer of 1865 a William Neustaedter employee walked to the post office on Broadway to retrieve the mail.  After presenting the firm's Post Office Card, he was handed a single envelope.  But when he arrived back at Walker Street, he was empty-handed.

On June 13 an advertisement appeared in The New York Herald.  "Lost--in Broadway, returning from the Post office, a Letter and a Post Office Card, No. 4,185."  Neustaedter offered a $5 reward, about $75 today.  Most likely the firm was more interested in getting its Post Office card back than the letter.

A strikingly different tenant was the Anakesis Company which moved in around 1873.  The firm manufactured just one item and its single-line advertisements were no-nonsense.  On December 8 1873 an ad promised "Anakesis Is a Sure Cure for Piles," and another the following week read "A Thorough Scientific Cure for Piles is Anakesis."   Around 1881 the company moved to Mercer Street.

Jacob Webster ran the J. Webster & Co. cloak, underwear and skirt manufacturing firm here in the 1880s.   In January 1891 business troubles were no doubt weighing heavily on Webster's mind when he got into an altercation with Arthur M. Mundt, who with his brothers manufactured "skirts and gaiters" nearby.  In the course of the argument Webster struck Mundt on the head "with some blunt instrument," according to newspaper reports, almost assuredly the head of his cane.  The incident would cause problems for both men later.

On February 23, 1891 Webster was forced into bankruptcy with liabilities of about $50,000--nearly $1.4 million today.  The following week a sheriff's sale liquidated all his stock and equipment, grossing a paltry $6,000.

His troubles continued when three months later he was arraigned "upon a charge of assault upon Arthur M. Mundt and held in $1,000 bail," according to The New York Times on May 15.  In addition Mundt filed a civil suit for damages.

The newspaper later explained that when Webster struck him, "concussion of the brain resulted and he has been subject to fits ever since."   When Mundt's brother and business partner, Martin, was found dead of morphine poisoning the following year, doctors were concerned about Arthur's continued unstable condition.  "It is feared that the shock he received will prove fatal," reported The Times on June 27, 1892.

Interestingly enough, Webster & Co. reorganized and was still in the building in 1894 when it employed 84 workers.  Of those only four were men.  Twenty were girls under 21 years old and 4 were under 16.  They worked 53 hours every week and 8 hours on Saturdays.

Also in No. 46 at that year were The Newport Shirt Co., with a staff of just three, all men; and the F. Simon Art Embroider company.

The building continued to house garment firms.  In 1901 shirt makers Morris Tolchinsky and L. Rosenowsky operated here, as did B. Jaffe, "waists."  The ground floor store was home to B. Judelowitz that year, selling "jewelry and novelties."

After a renovation in 1956 there were no more factories.  Offices and showrooms took up the lower three floors, while Department of Buildings documents noted "upper two [floors] to remain permanently vacant."

The Tribeca renaissance reached No. 46 in March 1974 when the Walker Street Gallery opened with an exhibition of "small landscapes" by Paul Narkiewicz and "drawings of people and landscapes" by Phyllis Yampolsky.

It soon became home to the Soho Repertory Theatre (known popularly as the Soho Rep), which installed a 73-seat auditorium.   The Off-Broadway theater was a destination for New Yorkers for decades until Playbill reported on September 28, 2016 that it had "closed suddenly."  The cast and crew of Gideon' Irving's show "My Name is Gideon" found out about the abrupt closing the day before the play was to open.

The problem, as latter explained, was that there were no permits to use the building as a theater space; and that maximum occupancy was limited to 70 people--three fewer than the number of seats.

With the help of the Mayor's Office of Media and Entertainment (its commissioner, Julie Menin called Soho Rep "a downtown beacon") Soho Rep completed a $500,000 renovation to meet code.  It reopened in the refurbished Walkerspace in August 2017.

And in the meantime, Theatergoers and residents in the apartments upstairs have no inkling that the marble-fronted building once changed children's vision of Santa Clause forever.

photograph by the author
Posted by Tom Miller at 1:31 AM