Philip McDowell, known popularly in newspapers as "Phil," listed his profession as "cigar and liquor merchant."  To be more specific, he was the proprietor of the Foghorn Tavern at No. 214 Ninth Avenue, one of the oldest in the city.

Born in New York City of immigrant parents in 1840, he was educated in the public schools.  As a teenager he entered the Union Army, serving on the staff of General George McClellan.   At just 24 years old he opened the Foghorn Tavern in 1864.  The New York Times later said it "quickly became the headquarters for politicians of every grade."

As his success grew, McDowell lavished money on his saloon's interiors.  He purchased valuable paintings and statuary for the tavern, which The Evening World later said "became the fashionable resort of the west side, and was popular with Chester A. Arthur, Cornelius Van Cott, Fred Gibbs, the Beglins, and the other Republican politicians."

Like so many of his regular patrons, he involved himself in politics; first becoming a member of Tammany Hall, then an independent Democrat and finally a Republican.

In 1889, having amassed a substantial personal fortune, McDowell tried his hand at speculative real estate.  He purchased the old brick house at No. 43 South Fifth Avenue, built around 1810, and hired architect Mortimer C. Merritt to design a modest commercial structure to replace it.

As the building was rising, the colorful Philip McDowell set off for his annual pilgrimage to Ireland where he owned a home.  On June 13 1889 The Sun announced, in somewhat tongue-in-cheek reporting, "Col. McDowell has the records to prove the fact that he is a descendant of one of the Irish Kings and that he has a right to a seat on the throne...Col. McDowell is a Tammanyite of high feather in the Thirteenth District Committee, and the members of the committee will be treated handsomely if he becomes Kind of Ireland.

McDowell's building was completed in 1890.  His choice of architects had made sense, since Merritt specialized in business buildings.  For this project he blended two popular styles, Queen Anne and neo-Grec.  The three-story building was completed in 1890 and, despite its relatively small scale, it held its own among the loft buildings around it with its striking design.

The two floors of brick above the cast iron store front overflowed with creative detail.  Spandrel panes of dog-tooth brick separated the second and third floors.  Single incised lines within the piers, coupled with rough-cut stones that smacked of capitals, implied pilasters.  An elaborate pressed metal cornice and parapet crowned the the building.  But it was the keystones of the third floor that took center stage.  Their totally unexpected designs took the shape of a fox or wolf, a dog, and a lion.


Perhaps the first tenant in the building was the Pickerton Detective Agency, which made its headquarters here at least by July 1892.

Within a year of his office building being completed McDowell showed signs of mental unbalance.   Friends first noticed it early in 1893 when the 52-year old life-long bachelor claimed he had purchased the Brooklyn Tabernacle (he had not).   His brother, James, had him taken to the Bloomingdale Asylum on May 8 after he was diagnosed with paresis--a form of dementia often caused by advanced syphilis.

As with all alleged cases of insanity, especially those involving the wealthy, an "inquisition" was ordered.  The procedure was to intended to prevent family members from fraudulently committing sane relatives to get control of their money.   McDowell's case was presented to a jury on May 15.  The Sun reported "Many friends of his were in court."  What ensued was a violent and dramatic scene.

Jurors listened to testimonies while McDowell was guarded by two "keepers" from the asylum.  "Suddenly McDowell, who had been as quiet as a lamb, jumped up and ran like a deer for the street," reported The New York Times.   "He was captured near the front door by the keepers."

He screamed "Let me go! Let me go!  I'm not crazy.  This is a conspiracy to kill me," and insisted his confinement was "a put up job."

Judge McAdam, who had known McDowell personally for 40 years, directed that he be returned to the Bloomingdale Asylum.  But, said The Sun, "the two attendants from that asylum had a heavy job put upon them.  McDowell, who is short, is strongly built.  He fought all the way to the Supreme Court floor, and the court attendants had to assist in his removal."

Declared insane by the courts, McDowell was committed and his brother took over the management of his estate, including the Foghorn Tavern and the South Fifth Avenue building.

Philip McDowell's stay in the insane asylum would not be especially long.  He died on October 4, 1894.  His funeral was held in the Foghorn Tavern four days later.

The many friends and politicians present during the funeral were no doubt shocked five months later when Agnes N. McDowell sued to have James McDowell removed as administrator of his brother's estate.  She claimed to be the wife of Philip McDowell.

She told the court on March 27, 1895 "that James McDowell has known for years that she was the wife of his brother."  The enterprising woman managed only to hold up the process and in the end James inherited his brother's entire estate.

In 1897 South Fifth Avenue was renamed West Broadway.  James McDowell continued to manage what was now No. 141 West Broadway along with the Foghorn Tavern.   One Midwestern newspaper commented that from the tavern alone he "made more money than he could spend."

His long-time girlfriend, Clara de Brave, was a fixture in the Foghorn Tavern.  The Evening World described her as "a beautiful young woman" and their relationship as "a deep friendship."  As had been the case with his brother, his friends and business associates would get a major shock following his death in June 1903.

The Evening World reported "a woman claiming to be his widow appeared at his funeral, and that was the first his host of friends ever knew of his marriage."  But unlike Agnes N. McDowell's attempted scam; Elizabeth McDowell's story was true.

His will was read on June 18 and it contained some surprising bequests.  Robert "Bob" Forbes and Charles "Charlie" Brady, both of whom had been barkeepers for 10 years, received the Foghorn Tavern.  The New-York Tribune said it " contained paintings and statuary valued at $30,000"--in the neighborhood of $845,000 today.  Everything else went to Clara de Brave, except for $1,000 for Elizabeth.

Newspapers later explained that James had wanted to cut Elizabeth out of his estate totally, but was "compelled" by the order of a police justice to leave her "a small allowance."  So he added a clause that coldly described Elizabeth as "who for thirty years has been no wife to me."

The Evening World called her "the little white-haired woman" and said her inheritance was "a paltry sum."  Elizabeth explained that they were married in St. Stephen's Church in 1862 when she was just 17 years old.   Things started off badly almost from the beginning.  A daughter was born who died soon afterward and then, in 1864 Elizabeth contracted typhoid fever, which worsened into paralysis.

"When me husband learned that my right side was paralyzed and that I was helpless, he proposed that I go to live with my mother.  That was the beginning of the end.  We were Catholics and he could not get a divorce.  I have loved him all these years in spite of the fact that I knew he did not care to live with me."

The Evening World tugged at its reader's emotions when it described "The white-haired woman, whose long thirty years silence on her interrupted romance was broken when she crept beside the coffin of her husband at his funeral."  The article noted "Until that day none of McDowell's friends had ever seen his wife but the pitiful figure of the little gray-haired woman moved all to sympathy for her."

Like Agnes McDowell, Elizabeth contested the will.  She told a reporter "All I can say is that I think it was unkind of my husband to leave his fortune to another woman, and besides that he left his business to his employees."

And, again like Agnes, Elizabeth's suit was unsuccessful.  Clara de Brave received nearly $150,000 (nearly $4.25 million today) and the West Broadway building, which was bringing in about $2,500 a year in rents.

It would seem to most that the battle over James McDowell's estate was over now.   But in May 1906 Clara found herself back in court when Bob Forbes and Charlie Brady claimed ownership of their former boss's jewelry.   They asserted that McDowell's diamond ring and cuff links were part of the "personal property in the saloon and its premises" which they had inherited.

Patrons to the Foghorn Tavern well remembered James's flashy jewelry.  The New York Times said that during the "frequent and popular entertainments" McDowell gave for Republican politicians "the ring, with its big single stone, and the equally radiant cuff links, were the most conspicuous objects in the place."

The court decided on May 22, 1906 that the jewelry was not included in the Foghorn Tavern property and that neither was Elizabeth McDowell entitled to it.  Instead the ring and "sleeve buttons" went to Clara.

When Clara de Brave sold No. 141 West Broadway to Albert Gans on February 6, 1908, the colorful chapters in the history of the little building drew to an end.  Its unremarkable tenants included a bakery, run by Max Serota; the Triangle Shoe Store; and the Metropolitan Barber Shop.  In the 1940s the upper floors were home to importer Charles Frederick Schneider.


One out-of-the-ordinary occupant was Henry Herbert Frederick Trefflich, an "animal dealer," who leased the ground floor space in the 1970s.  He received a daunting assignment in July 1974 when the Central Park Zoo decided to replace its two adult hippopotamuses, Falstaff and Rosey, and their year old daughter, Daisy, with two pygmy hippos.   John W. Fitzgerald, the zoo's director, explained "The pygmy hippos will be more of a novelty, and they, of course, will need less space."

Now Trefflich had to figure out how to get the unwieldy cargo to its new home in a Toronto zoo.  The shock of being transported could be injurious to the animals so Trefflich spent days introducing them to their shipping crates.


On Tuesday, July 30 he told a New York Times reporter it would take at least another week.  "I hope that maybe I can get them used to the crates and into them by Tuesday or Wednesday." 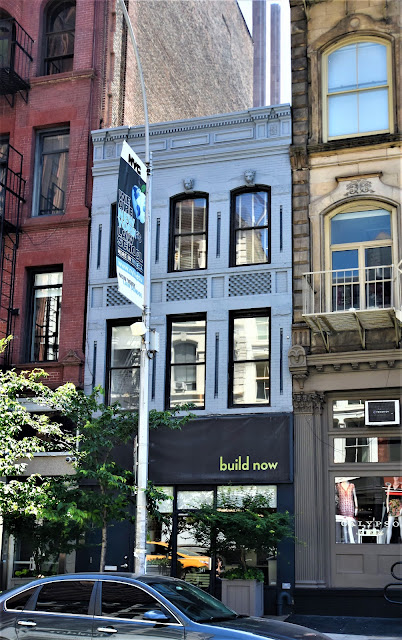 Today the facade of No. 141 West Broadway is painted gray, disguising the contrast of stone and brick.  The upper floors have been converted to apartments and a modern storefront replaces most of the cast iron base.  But Mortimer Merritt's quirky keystone menagerie, mostly unnoticed by rushing New Yorkers, continues to stare down at passersby after more than 125 years.