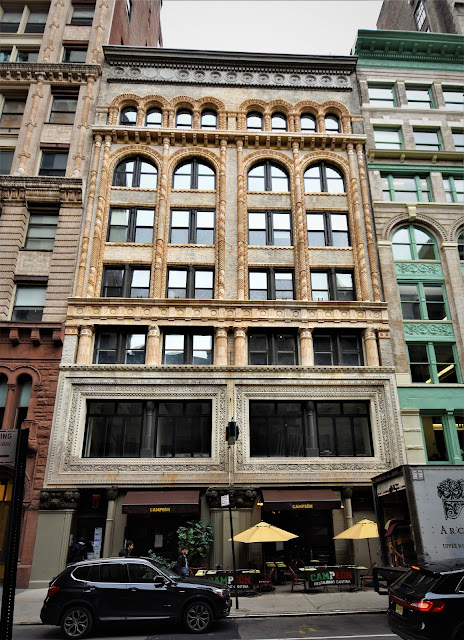 Architect George W. Maher told the Chicago Architectural Club in March 1906, “If the architecture of this country is to be kept from going to the bow-wows, in which direction it is headed just now, Chicago must do it.… New York and other cities which architecturally speaking, [have] bound the United States on the east, are powerless to take the initiative.  They are to be rescued.”

Chicago architect Louis Sullivan was way ahead of Maher.   He had been changing the face of American architecture for years with his innovative forms and decoration.   And his new direction was not overlooked by New York architect Louis Korn.

A decade before Maher's comments the conversion of the East 16th Street block between Fifth Avenue and Broadway from a residential to commercial neighborhood was in full swing.    Early in 1895 developers Gutwillig Bros. and Jacob Hirsch purchased the four-story house at No. 11 East 16th Street, then quickly resold it to builder Martin Johnson.  Johnson commissioned Louis Korn to design the 25-foot wide building.  On March 2 the Record & Guide said the plans for the $50,000 building "call for all [the] latest improvements."

Within the month Gutwillig Bros. and Hirsch bought the house next door, at No. 9 and announced their intentions to "erect a companion building" to Johnson's.   But, instead, Johnson acquired that property as well and before long his project had doubled in size.

Completed in 1896, Louis Korn's remarkable loft and store building clearly showed the influence of Louis Sullivan--particularly in the carved stone and terra cotta ornamentation.   The muscular stone piers of the ground floor were capped with ornately-carved Romanesque capitals.  The second story openings sat within the architectural equivalent of Victorian picture frames that must have kept stone carvers busy for months.  The fourth through sixth floors. clad in brick and terra cotta, offered a visual bounty.   The swirling decoration of the three-story engaged columns alternated from spiraling lines to clinging vines.  The arcaded seventh floor was topped with a pressed metal cornice with a deep frieze of roundels. 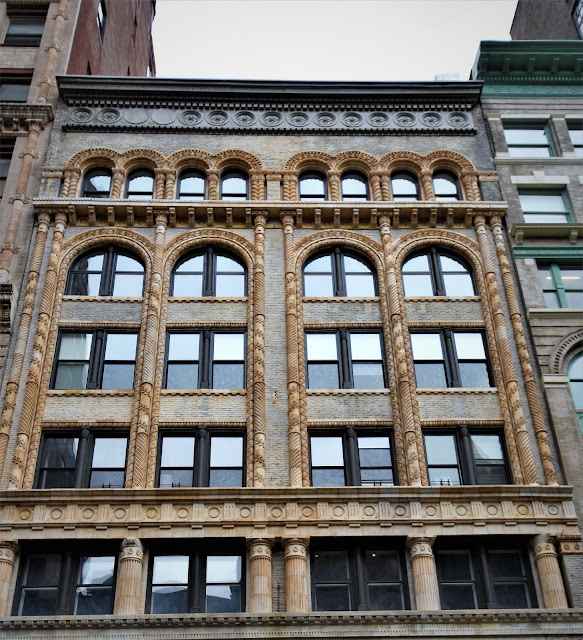 On April 30, 1896 The American Stationer reported "The new building at 9-11 East Sixteenth street, New York, is fast filling up with tenants, so far exclusively with those connected with the stationery and book trades."

And indeed, all the tenants that spring were either publishers or involved in the office or school supplies trade.   Among them was the Milton Bradley Company which had moved from Astor Place the month before.   The company not only manufactured the board games for which it is so famous today, but children's art supplies.  Leach, Shewell & Sanborn published school and college text books.

Also in the building by the time of the article were publishers Merrill & Baker and Perkins & Hovendon; and office supplier Edward Todd & Co. which manufactured items like gold pens.  The H. P. Smith Publishing Company was here, too.  It published the Educational System of Penmanship and dealt in school and business pens, and school compasses.  And H. M. Caldell Co., another publishing firm, had moved in by now.  In April 1986 Publishers' Weekly  noted that the firm was preparing "numerous series" of books.

In May that year publishers Gustav E. Stechert offered the Libraries of Greater New York.  The guidebook included 350 libraries, including branches, and provided "location, history, and regulations of each library."   Most likely assuming the guide would be carried around, the publishers offered it only with soft covers.  The cost was 75 cents for cloth cover and 50 cents for paper.


Also in the building in 1902 was the publishing firm of Grosset & Dunlap, founded in 1898.   In 1903 it would publish the first of its series of the Sherlock Holmes mysteries that would be one of the company's mainstays for decades.

The days when employees enjoyed two-day weekends were still far off in 1902 when Samuel A. Jenkins went to work at Grosset & Dunlap on August 2.  But unlike factories and garment shops, publishers enjoyed half-days on Saturdays.  But that day, engrossed in taking stock, Jenkins lost track of time.

Suddenly realizing that he was alone, Jenkins attempted to leave the fifth floor office at around 3:00.  Unnoticed by the other staff, he had been locked in.  With no telephone, he realized he faced the possibility of being trapped until the first workers arrived on Monday morning.

Around two hours later he noticed a small boy playing in the rear yard.  Jenkins got his attention and begged him to find a policeman.  The boy notified Policeman Speeden who came to the rescue.  The New York TImes reported that he "forced an entrance through the basement, got to the freight elevator, ascended to the fifth floor, and after considerable trouble rescued the imprisoned man and brought him down."

By 1904 C. T. Brainard & Co. was operating from the building.   That year it the publisher offered The Theodore Thomas Library of Music in "ten solid volumes," containing "the very best, but not the most difficult music," and an Encyclopedia of Music.  The series was produced in "six large volumes containing a history of music, the biographies of the greatest composers and musicians and a wealth of interesting and instructive facts relating to musical matters."

Merrill, Baker & Co. was still in the building at the time.  Like all publishers of series, or "subscription," books, it heavily relied on door-to-door salesmen, not all of whom were reliable.  In 1903 a salesman was hired to sell subscriptions to a 20-volume work of French memoirs.  The total cost was $240--a substantial $6,750 today.

He sold two sets to Frederick W. Jobelman who had recently opened an office at 80 Wall Street.  Merrill, Baker & Co. sent the books after the first payment was received.  Immediately both the salesman and Jobelman disappeared.  A detective was put on the case.   In mid-September, 1904 an advertisement appeared offering the books at $90 in Wilson & Co's bookstore.  Police arrived and arrested Jobelman on the spot.


That year the first hint of a change in the tenant list appeared in Cloaks & Furs.  "Chas. Heineman is receiving his friends at his cloak and suit emporium, 9-11 East Sixteenth street, where he is reiterating his unalterable faith in 'Instep lengths,' the phrase which he himself has made famous in the cloak and suit work."

The store space became home to the floor covering dealers Walker & Heisler on January 1, 1910.  The opening announcement touted its "Cut-Order Departments" which offered "every grade of Carpets and Rugs from the Hartford and Roxbury Mills."  The new, larger showroom space allowed the firm to introduce  the "cutting of Greenwich Inlaid Linoleum."

Five years later Walker & Heisler expanded, leasing the entire building "for many years."  But the firm may very well have over-estimated its success.  Within the year they were gone.

In 1916 Lenz & Nauluan, Inc. took the store and basement.  The firm, which imported and sold scientific apparatus, changed its name that year to the American Apparatus Corporation.

The building continued to house an eclectic mix of tenants.    In 1918 A. F. Fondeville & Co., importers of "china, earthenware and glassware, leased a full floor; and by 1921 Hitz, Jacobs & Kassler's showroom and warehouse was here.  It stocked a massive array of toys including dolls, doll carriages, child's furniture, mechanical toys, velocipedes, sleds, and, as an advertisement put it, "Etc., etc., etc."

Not all of the old occupants were gone, however.  In 1929 R. F. Fenno & Co. remained, publishing The Rubaiyat of Omar Khayyam that year.

And the publishing tradition managed to continued.  In 1931 Shulman Printing Company took a floor, and by 1934 The Amerikai Magyar Nepsvana (American Hungarian People's Voice) was being published here.  As a matter of fact, the Press Building Co., Inc. owned 9-11 East 16th Street in 1935 when it made extensive renovations which resulted in printing facilities, composing rooms, and manufacturing space.  But the changes would not last long.

In 1937 the building was converted to classrooms, locker rooms and offices by architect Hugo Taussig for The Delehanty Institute.   Founded by Michael J. Delehanty, the school trained candidates for civil service jobs.  At one point it was estimated that 90 percent of New York's firemen and policemen were educated in The Delehanty Institute.


With America's entry into World War II, the institute slightly changed course.  On June 14, 1942 The New York Times reported "Three new courses in machine shop maintenance, general machine shop and shop time study and production, to prepare students to take their places in the war effort, have been added by the Delehanty [sic] Institute."

The Army's Quartermaster Purchasing Office shared the building by 1946.  It was here on August 16 that Major General Thomas B. Larkin, Quartermaster General of the Army, examined the newly developed trench coat.  The military's use of the building continued well into the 1950s, with the Army Corps of Engineers occupying space ad well as the Air Force Procurement Office. 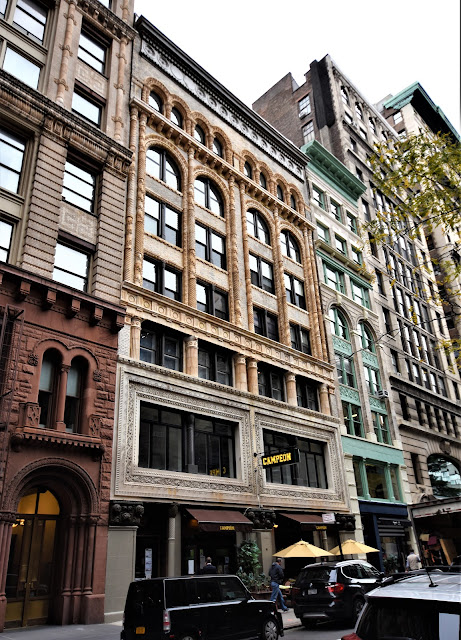 It all came to an end in 1992 when the upper floors were converted to apartments by the respected preservation architects Joseph Pell Lombardi.  A rare example of Sullivanesque-style architecture in Manhattan, Louis Korn's striking structure survives wonderfully intact.