By the mid-1880s Frederick Becker and his family lived in the brick-faced house at No. 249 East 82nd Street.  The Yorkville district by now was filling with German immigrant families, most of them working class.  Becker was slightly different.  A successful real estate operator, his home reflected his comfortable lifestyle.

But despite its stylish French Second Empire mansard, the house provided hints that the area was far removed from the fashionable neighborhood on the western side of Park Avenue.   The stone treatments of the parlor level openings, as well as the doorway, were somewhat clumsy, for instance.  But most surprising was the location of the family's stable--directly next door.

The very fact that the Beckers could afford their own stable (and in turn at least one horse and vehicle) spoke of their affluence.  But most wealthy families built their carriage houses a block or more away from their homes--eliminating the noise and odors that were necessarily associated with them.

Frederick Becker sold the house, apparently in the 1890s, to another real estate operator, Zachariah Zacharias.  He owned and managed several investment properties in the immediate neighborhood and slightly altered the stable building as a store by the turn of the century.   In 1907 it was described in the Real Estate Record & Builders' Guide as a "two-story brick store."

There was living space on the second story of the little former stable in the spring of 1910 when Gustav G. Gaertner and his wife, Flora, purchased the it and the house.  The combined properties were assessed at the time at $14,500--about $378,000 today.

The Gaertners wasted no time in making changes to the stable building.  They hired architect Fred Ebling to do $5,000 in renovations, including new stairs and walls, a new front, and "cornices."  The New-York Tribune reported on May 28 that Ebling's plans "for making over the two story stable" would result in "offices, shops for light manufacturing."

While shops operated from the little brick building, the Gaertner's leased rooms in the house to working-class Germans, like Gustave Wolff.   He had worked for the City in the Department of Public Charities, but was fired.  So when he applied for a job as an Inspector of Milk in 1914, his application came under extra scrutiny.  A report by Leonard Felix Fuld on February 21 instructed that Wolff be marked "Not Qualified" pending review of "a copy of the charges upon which the said Wolff was dismissed."  It is unclear (but doubtful) if Wolff got his new job.

The residents of the house had a shock during the double-punch storm that hit on the night of Valentine's Day, 1922.  Following the blizzard that ended early the following morning, a northeast gale from the coast of Maine battered the city.  At some point 60-year old George Remig had collapsed in the snowstorm in front of No. 251.  The Evening World reported "He was dead when Dr. Kaye of Flower Hospital arrived." 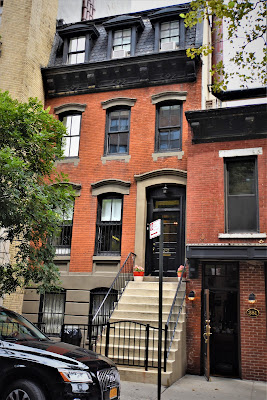 The following year, on June 3, tenant Patrick Fox was riding in a taxicab along with a friend, Bernard J. Sherry, who lived about a block away on 81st Street.  As the cab turned from Fifth Avenue onto 86th Street, it was involved in a horrific three-car crash.  Both Fox and Sherry "were buried in the wreckage," according to The New York Times.   Patrolman Charles O'Connor called on pedestrians to help extricate the men.  Luckily, other than a broken collarbone, Fox's injuries were not serious and Sherry suffered cuts and bruises.   Their cabbie, John Kelly, was arrested on charges of felonious assault and held on $3,000 bail (a significant $43,000 in today's dollars).

Flora Gaertner sold the two buildings on May 28, 1929 for $50,000.  Her decision to liquidate was timely, with the Stock Market Crash only a few months on the horizon.

During the Depression years tenants like Mary Hechtl lived in the main house.  She was a hair dresser in Boris Silbert's "Orchid Beauty Salon" at No. 167 East 86th Street starting in September 1933.  Mary made $8 a week when hired.  She got a substantial raise in May 1935 which nearly doubled her pay to $15, or nearly $265 a week today.   Mary's welcomed windfall resulted in her having to do some explaining on the witness stand later that year when Boris's wife made it a point of contention in an ugly divorce suit.

Sharing the Yorkville neighborhood was Manhattan's Hungarian population.  In 1970 Sandor Puski arrived in New York from Budapest where he had been a publisher and book dealer.  With his son, Istvan, he established Puski-Corvin Magyar Konyveshaz in the little stable building.  The first floor included a bookstore in the front, and offices and a typesetting machine in the back.  From the back his Puski Publishing produced Hungarian language books; while the bookstore stocked some 12,000 titles.

The second floor was a small art gallery where signed lithographs by Hungarian artists could be purchased.  It also served as the home Pulski and his wife, Ilona, and where visiting Hungarian artists held regular meetings, lectures and poetry readings.


In 1987 a patron told a reporter from New York Magazine "There's no bookstore like this for Hungarians outside Budapest."  And, as a matter of fact, there was not one like it there, either.  Western books were outlawed in Hungary at the time.  "The books here are books of ideological openness and also books by classical Hungarian writers, and there's a small collection of rare books as well," the customer explained.

Eva Feitelson worked as a salesperson at the time.  She said Puski-Corvin was "really about staying Hungarian" and that the upstairs meetings "help us all stay in touch with our culture, and let others learn what it means to be Hungarian."

In the meantime, the main house had a small store and an apartment in the basement level, "furnished apartments" on the parlor floor, and 11 furnished rooms in the upper two floors.


But times were changing, as they always do in Manhattan.  On July 23, 1989 The New York Times remarked on the "rejuvenation" of the Yorkville neighborhood and of "what little is left of the German and Autro-Hungarian empire."  The article pointed out the few surviving businesses catering to the dwindling Hungarian population, including Puski-Corvin. 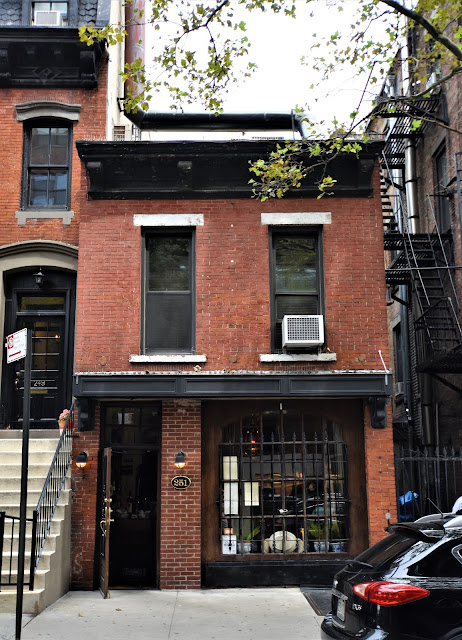 The changed eventually came to 249 and 251 East 82nd Street, as well.   Today there are just four apartments in the main house and the bookstore was converted to King's Carriage House, a restaurant, in 1996, which remains.  The two remarkably-surviving structures form a charming vignette--a sort of time capsule glimpse into the Yorkville that was in the 1880s.