The residents and developers of the Upper West Side, more than anywhere else in the city, were quick to embrace the concept of apartment living.  In the last years of the 19th century mansions along the district's avenues, built only a decade or two earlier, were demolished for modern apartment buildings.

In 1904 developer Abraham M. Morgenroth was part of the trend.  That year he commissioned Schneider & Herter to design an upscale apartment building engulfing the buildings lots at Nos. 302 through 306 West 79th Street, between West End Avenue and Riverside Drive.

Architects Ernest B. W. Schneider and Henry Herter produced an eight story structure of red brick and limestone.   The tripartite design included a two-story stone base that supported five stories of red brick, followed by a rather spartan stone-and-brick upper floor.  The architects splashed the facade with exuberant Beaux Arts touches, like the French-inspired cartouche above the entrance and the swag-draped brackets of the second floor cornice.

Highly unusual were the five-story bowed and hooded bays.  They not only added dimension, but caught breezes on warm summer evenings.  Schneider & Herter saved their employer money by using stone-colored brick rather than stone to create the quoins and rusticated piers.  The bowed bays were crowned by carved angels holding shields.

The Orienta was completed in 1905 and had just four apartments per floor, ranging from suites of five to seven rooms.  The largest apartments included "extra servants' toilets," so the families did not have to share the bathrooms with the staff.  Morgenroth's advertising boasted "The trim throughout is of select hardwood, rubbed to a high polish."


The well-heeled families who leased apartments in The Orienta would enjoy the latest in conveniences.  Because electrical service was still unreliable, there were both electric and gas lighting fixtures in the suites.  A 1905 advertisement noted "there are long distance telephones in all apartments.  The plumbing throughout is modern and sanitary and the kitchens are fitted with porcelain lined washtubs and sinks and glass lined refrigerators."  The parlors of each apartment included a gas-log fireplace.


The lobby was meant to impress with marble wainscoting and "a commodious waiting room."  A description of the new building in The World's New York Apartment House Album made special note of the location.  "It is high, has perfect drainage, and because of its proximity to the Hudson, Riverside Drive and Central Park, enjoys the purest air."

For all these amenities residents would pay between $660 and $924 a year; more than $2,000 a month in today's dollars for the largest apartments.


Apparently all the players in planning and designing The Orienta were well-pleased with the outcome.  Abraham M. Morgenroth took an apartment and Schneider & Herter listed its address here in 1905.

One of the first to move in was Eugene E. Christian, a fervent proponent of "the Pure Food cause."   The founder and principal in Christian's Natural Food Co., he would be called a food naturalist today.  His letter to the Seville Packing Company on November 10, 1905 was written from his apartment-office here.

The firm had sent him samples of its Nicelle Olive Oil for endorsement.  Christian told the company he had "tested your Nicelle brand of olive oil by both natural and chemical methods, and I find that it contains nothing but a pure ripe olive fat."  His findings no doubt pleased the firm's marketers.  He signed the letter "Eugene E. Christian, Naturalist and Food Expert."

Most residents, however, appeared in the press for purely social reasons, like Everett Jackson and his wife.  On April 1, 1906 The New York Times society page reported "Mrs. Everett Jackson gave her final at home for the season on Tuesday;" and two years later, on April 5, 1908, noted "Mr. and Mrs. Everett Jackson...will leave town this week for a ten days' trip to Atlantic City."

In 1908 Dr. George P. Long moved his practice from Long Island to The Orienta.  The ground floor doctor's office included an apartment with a separate entrance.  Dr. Long paid an annual rent of $840 for the space, or about $1,925 a month today.

Other moneyed residents at the time included manufacturer G. Irving Abendroth; Arthur Edmunds Jenks and his wife, the former Catherine Bonner; and E. M. Cravath and his wife.  Jenks was a partner in the Hanson-Jenks Co., perfumers.  The Cravaths summered on Long Island and were prominent in the horse set.  The New York Times included them among "the most exclusive element on Long Island" at the North Shore Horse Show at Piping Rock in 1909.


While Cravath and his wife busied themselves with the horse shows, another resident was more interested in dogs.  J. Willoughby Mitchell was involved in the annual Monmouth County Kennel Club shows, participating as a Ring Steward in 1908.   His wife focused on more political issues, however.

An ardent feminist, on May 27, 1915 she hosted a "canvassing tea" for the Suffragist cause in the Hotel Belleclaire.  She was also an officer in the national organization of "Women of 1915."  Among the group's efforts that year was preparing for the Patriotic Ball to be held on January 24, 1916 in the Biltmore Hotel.  The goal was to raise funds to purchase "an aeroplane to present to the coast defense of New York."

A rather flamboyant resident styled himself as Comte Rene de Nannez.  He left The Orienta on the evening of July 15, 1914 dressed in evening clothes and wearing a monocle.  His cabbie, Archibald Rogers, took him to a French restaurant on 26th Street and when they arrived the Frenchman insisted that he join him for dinner.  When they arrived back at The Orienta, the count refused to pay the $9.10 fare, saying the dinner was more than enough to cover it.

Rogers had him arrested.  The New York Times reported that the prisoner "talked only French" but "the complainant had no trouble making himself understood."  Finally a French-speaking officer, Captain Bonnoil, arrived and was able to communicate with the prisoner.  The Times said "He said he had no occupation and lived on the income of his estates in France.  When searched enough money was found to more than pay Rogers."   The count was locked up, charged with intoxication and for refusing to pay his cab fare.

George Neubauer was also in a police station house that year; but he was on the more favorable side of the law.  Wanting to sub-let his apartment furnished, he showed it to George Krag on March 7.  As they walked through each room, Neubauer was puzzled when Krag "put down his hat and picked it up again more than seemed necessary," as reported by The Sun.

The mystery solved itself when at one point Neubauer's gold watch and chain, which had been on a bureau, fell out of the hat.  The 24-year old clerk had worked his scheme at least twice before; but this time he picked the wrong victim.  Neubauer "seized Krag" and dragged him out of the building and into police custody.

Among the more high-profile residences by 1921 was Leslie S. Petrie.  A director of the Chesapeake Western Railway he was more importantly the right-hand man to millionaire W. E. D. Stokes who lived nearby at the Ansonia Apartments where Petrie had his office.

In 1921 Helen Stokes left her husband, whom she said had an income of more than $500,000 a year--about $6.7 million today.  Petrie's name appeared in the papers as the messy court case dragged on as Helen sought to obtain "her dower rights" (the right to remain in her residence owned by Stokes).   But the case turned even more scurrilous when the divorce case became entangled with the nationally-publicized murder investigation of sportsman and gambler Joseph Bowne Elwell.

Elwell was found with a bullet wound in the head on June 11, 1920.  The absence of a weapon ruled out the possibility of suicide.   Keys found in Helen Stokes's bureau a year later were suspected to fit the locks of Elwell's home.  Suddenly Petrie, who had been testifying on his employer's behalf, found himself defending Helen.  On April 8, 1921 he testified that the keys fitted the door of the apartment of Edgar T. Wallace, not the Elwell home.

The murder case was never solved.

Another mystery revolved around 36-year old Albert Frazer, who spent the summer of 1929 in Europe.  He boarded the steamer Belgenland in Germany headed home in September.  When the ship docked on September 15, Frazer did not disembark.  A search of his cabin found him dead.

Morris Breitman lived in The Orienta in 1939.  The 43-year old had been the private chauffeur for a wealthy family for 17 years.  His fascination with automobiles took a dark turn that year.   Around 5:30 on the morning of November 7 a car was seen burning in front of No. 250 West 80th Street.  "Hardly had the firemen extinguished the blaze when they saw another car afire in the same block," reported The Times.

According to police, in his possession were two books of safety matches, the covers of which matched one found in one of the burned automobiles.  The chauffeur admitted he "had had a few drinks."  Although he denied setting the fires, he was arrested and charged with arson.  There were no more car fires.

In 1959 The Orienta was renovated, resulting in five and six apartments per floor.  Still respectable, the tenant list was nevertheless now slightly more down-to-earth.  Among the residents was Julliard student Gerard Schwartz who paid $167 a month for a two-bedroom apartment.  Among his later accomplishments would be becoming the music director of the Seattle Symphony Orchestra, and the music director of Lincoln Center's Mostly Mozart festivals between 1982 and 2001. 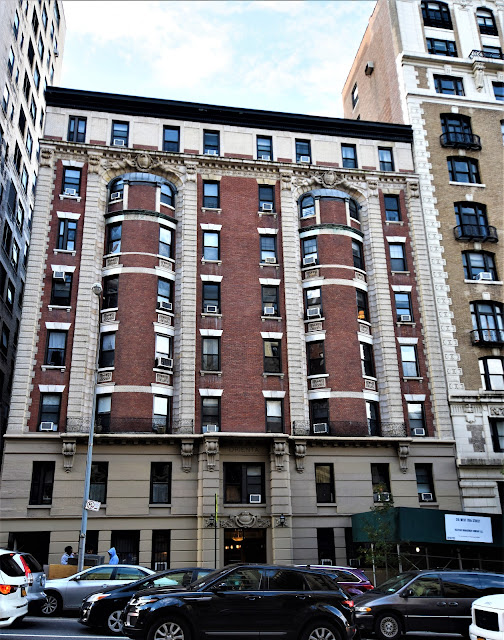 The Orienta was converted to co-operative apartments in 1988.  Schneider & Herter's dignified exterior with its unusual rounded bays remains nearly unchanged.