Sarah Mills erected her brick-faced home at No. 927 Broadway around 1852.  That year a servant girl, who worked just two days a week,  was looking for a more permanent position.  She placed an advertisement in the New-York Daily Tribune seeking work “As Nurse and plain Sewer, or as Chambermaid and plain Sewer, by a respectable Protestant Girl.  Can be seen for two days at 927 Broadway.”  But Sarah's neighborhood was quickly changing as commerce crept up Broadway.

Only three years later another servant placed a similar ad, with a noticeable difference.  She ended it saying "Can be seen for two days, Monday and Tuesday.  Call at No. 927 Broadway, between 21st and 22nd-st., 2nd floor.”   The designation of "2nd floor" suggests that already the street level had been converted to a shop.

By 1858 the ground floor was home to piano manufacturer Patrick Lynch's showroom.  He would be one of several piano merchants to establish themselves along Broadway in the middle of the century.  Lynch’s showroom exhibited pianos at a period when no respectable middle or upper-class parlor would be without one.

In 1866 Lynch partnered with another piano dealer named Gomien and they continued business as Lynch & Gomien in the building through 1873.

Interestingly, another piano seller was simultaneously doing business in the building.  Robert Harper had been a piano tuner in 1849 and 1850; but in 1861 he placed an advertisement that read “Robert Harper, Pianoforte Maker.  For the past 20 years in the employ of the first establishments in the city, in the Manufacture, and also Tuning…Orders left at 927 Broadway.”

Above the piano showrooms were the headquarters of the Union Democratic Association.  On October 27, 1862 James T. Brady addressed a large group of men here, ais the election neared, ridiculing the Republican candidate.  The New York Times reported on his speech, tellng his audience "that the only choice left for them was that which the man gave his wife on the occasion of a severe domestic feud, when he said to her, after a great deal of altercation: ‘My darling, you can stay in this house or not, exactly as you please, but I am determined you shan’t stay.’”

As the 1870s drew to a close one of the upstairs rooms was leased by a tailor and men’s clothing maker.  On October 2, 1879 he advertised for “A good coatmaker and tailoress wanted.”  Business was either very good or the employees not so much; for a year later—nearly to the day—another advertisement appeared in The Sun.  “Wanted, good coat maker in store; also tailoress; Singer machine.  927 Broadway up stairs.”

By 1882 the E. A. Clark Custom Corsets firm occupied an upper floor, and J. B. Shepherd sold "fancy work and decorative work" from the former piano showroom.  On November 29, 1884 the Record & Guide noted Shepherd was selling the newly-popular "bamboo cloth" which it deemed "very pretty and serviceable" and "embroidered with Algerian silk in Kensington and finished with lace."  The article promised that "many attractive and novel designs in Renaissance embroidery, kid and plush applique work is offered."

In 1887 millionaire dry goods merchant James McCreery purchased the building for $120,000.  An investment property, it was given a significant makeover.  The squat building was enlarged to five floors and any traces of its residential origins were gone.  While other builders for cast iron or stone for their commercial facades, McCreery's architect was content with brick above the cast iron storefront.  Using only touches of stone trim, the architect manifested his Romanesque Revival design almost entirely in brick.  Even the brackets of the pressed metal cornice were brick.

The renovated building attracted tenants of the millinery and clothing trade that were quickly engulfing the area.  In 1887 the retail space at ground level was home to the Cleanfast Hosiery Co.  The company would stay on into the 1890s.

Upstairs was Professor Livingston’s dress cutting school, touted by the Professor himself as “The largest dress cutting school in the world, and the only place in New York where ladies can learn the entire art of French dress cutting, making, finishing, tacking, draping, designing.”   Women already adept in sewing could buy imported dress patterns here.  An advertisement in The Sun on April 20, 1890 called the selection “The largest and finest assortment of imported patterns ever brought to this country.”

The Professor lured out-of-town shoppers to send for a pamphlet by promising “Elegant fashion plate will be given to any lady for circular.”

A year later Professor Livingston remarked on his success in The Sun; noting the high demand for seamstresses who had finished his classes.  “We cannot supply the demand for dressmakers using my new French combination of squares, the only system that is not a chart.”  Professor Livingston stressed his one-on-one technique.  “We do not teach in lessons or in classes, but each lady separate until thoroughly learned.”

James McCreery sold the building in 1891 for $165,000.  His improvements and frugality in design would seem to have paid off.  The difference from his original purchase price four years earlier would translate to approximately $1 million today.

While Professor Livingston taught young ladies the art of French dressmaking, the Jenness Miller Co. was publishing the Jenness Miller Illustrated Monthly magazine from the building.  Good Health magazine was impressed with the Illustrated Monthly’s April 1893 issue, calling it “a fine feast of good reading.  There are some good stories poems, fashion news and gossip, finely illustrated, and also the story of a wonderful Hindu woman.”

The millinery and apparel tenants would be ousted in favor of confections when Ignazio Allegretti signed a $12,000 per year lease on the entire building on January 16, 1897.  The Chicago-based businessman ran the Allegretti Chocolate Cream Company.  Now the company looked to open a New York Branch.  The New York Times reported that it would use the building “as its New York manufactory and salesrooms.”

Allegretti Chocolate Cream Company's ambitious plans did not last especially long.  By 1902 Miss K. McCrane ran her jewelry store from street level.  And it was a particularly bad year for her.

Early in August she discovered that thieves had broken in and made off with about $600 in jewelry.  The New York Times was surprised at the burglary, considering that “the store is at a point where there are people passing at all times and where the light is bright throughout the night.  Besides, there is a light in the rear of the store, which is kept burning all night.”

Miss McCrane notified police; but was less-than-satisfied with their effectiveness.  She was even more upset with law enforcement when she arrived at the store on August 30, less than a month later, to discover a broken window and more jewelry missing.  The Sun reported that “When Miss K. McCrane, the proprietor of the store, arrived and discovered her loss she sent at once to the police station and told the police she wanted them to get out and hustle for the thief.”

After waiting all morning for police to arrive, she took matters in her own hands and sent for newspaper reporters.  By the time they arrived, Police Captain Sheehan had been there; managing only to enrage the businesswoman more.

“Capt. Sheehan came around about 11 o’clock,” she told reporters, “and said, after looking over the place: ‘Well, you must expect such things if you leave valuables in the window.’  Now, if I can’t get police protection I’ll find out why.  The idea of a store in this neighborhood being broken into and the robbers escaping!”

The feisty store keeper offered a vague threat.  “Now, I’m just going to give them time to do something, and if they don’t catch the man I’ll take up the case myself and see whether the police are going to do their duty or not.”

Captain Sheehan responded with a surprising solution.  He arrested his beat cop for not catching the thief.  “When Capt. Sheehan heard of Miss McCrane’s talk to the reporters he said that Policeman Schoemaker was the person who was responsible for the robbery.  To emphasize this, he preferred charges against Shoemaker ‘for failing to catch a burglar on his post,’” reported The Sun on August 31.

Meanwhile, upstairs the Alaska Fur Co., was doing business refurbishing used furs.  “We buy, trade, repair, remodel and sell Furs at wholesale prices,” it promised in an advertisement later that year.  “We take old Furs in exchange for new.”

In 1912 the city widened Broadway and buildings along the thoroughfare were required to comply.  Architect Alfred Freeman was commissioned to remove the protruding store window where Miss McCrane’s jewelry had been displayed—and stolen—and install a new display window flush with the property line.

As World War I took young men away from the work force, the United States Employment Service opened special offices in the building to fill Government jobs.   The office was sparked to action following a the devastating explosion in a munitions packing plant in South Amboy, New Jersey on October 4, 1918.

The initial blast was felt in Manhattan and a series of fires and explosions continued for three days, killing some 70 people.  The loss of the factory was potentially disastrous for the military.   In order to continue supplying munitions, the focus of work was switched to another plant in May’s Landing, New Jersey.  Nine hundred soldiers were temporarily sent to the factory to supplement the work force; but civilian workers were desperately needed to replace them.

In 1920 the fourth floor of the building was leased to Drummer Press; but within weeks the parent firm of Drummer & Cohen purchased the entire structure.  The company manufactured stationery and The New York Times announced that it would “alter the store and basement for occupancy.”

Throughout the rest of the century the brick-faced building housed a variety of small manufacturers and offices.  In 1946 Alex S. Gordon Son, “jobbers of elastics and rubber goods” occupied part of the building after it purchased the property that year.  In 1970 the store front was altered again; and today the first two floors wear an unhappy attempt at a modern façade. 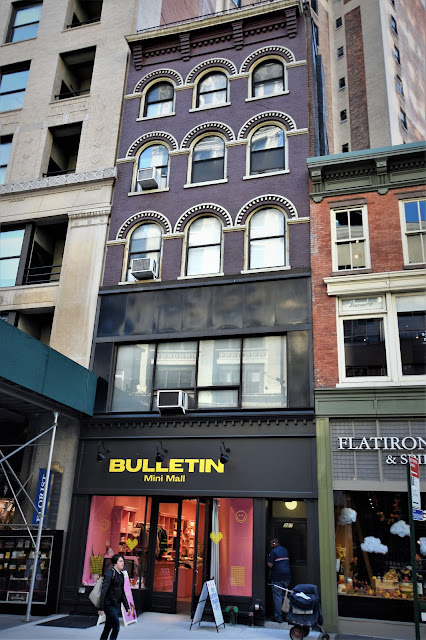 Above, other than replacement windows and a questionable paint job; the 1880s façade is intact—an ingenious (and cost-saving) example of architectural brickwork.