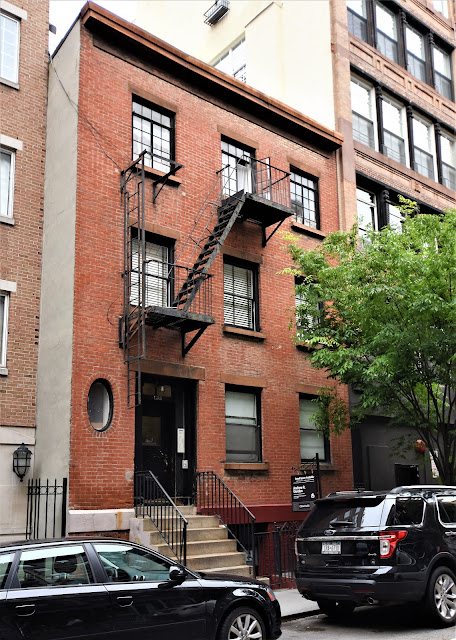 Something happened to the house at No. 138 Sullivan Street around 1840.   Brick-faced residences had first begun appearing along the block between Prince and Houston Streets only around 14 years earlier; so it may have been fire that necessitated Charles Stewart to build a replacement.

The former house would have been Federal in style, with dormers piercing the peaked roof.  Stewart's, however, took on the newly emerging Greek Revival style.  The slightly pitched roof sat above a full-height third floor.  The openings were trimmed in understated brownstone lintels and sills.  The entrance, however, was transitional.  More in line with its Federal-style neighbors, there was no stone enframement around the entrance.  On the other hand, the simple, squared pilasters flanking the door reflected the more somber Greek Revival.


Most houses of the period had small buildings in the rear lot--either a stable for those who could afford a horse, or a small house or shop.  These were accessed by a horse walk--a narrow pathway between houses.  The oval window to the left of the entrance suggests a horse walk may have originally tunneled to the rear, beside the stoop.

No. 138 became home to Henry E. Price family by the 1850s.  It appears that one bedroom was leased.  In 1855 William P. Howe listed the house as his address.  A saddler by trade, he also volunteered with the Niagara Engine Company No. 4.  That fire house was a few blocks away on Mercer Street.

The young Price may have been a member of the Municipal police at the time.  In 1857 Republican reformers abolished the force, creating instead the Metropolitan Police force that covered Manhattan, Brooklyn, Staten Island and Westchester County.  A sharp rift developed between the immigrant officers and those of Anglo-Dutch roots; the former refusing to give up their positions while the latter adapted to the transition.

The dispute led to two police forces which came together in violent riots.  Chaos resulted and while the police fought one another in at least two high profile skirmishes, criminals ran rampant.  The situation was finally put to rest on July 3, 1857 when the courts enforced the Metropolitan Police jurisdiction.  On November 24 Henry E. Price was "reported on favorably" by the Committee on Applications and Removals, which was charged with staffing the new department.

By the summer of 1859 J. Whitelaw was boarding with the Prices.  Out of a job, he placed an advertisement in The New York Herald on July 13.  "Wanted--by a young man, who has a thorough knowledge of the wholesale drug business, a situation in a wholesale house; is willing to make himself generally useful, and can give satisfactory reference as to capability and character."

Christmas Day that year was anything but jolly.  Price's mother-in-law, Mary Ann Short, had died on Friday, December 23 at just 43 years old.  Her funeral was held in the Sullivan Street house at 1:30 on Christmas afternoon.

Exactly two months later, on February 23, Price's father, Ellis, died.  His funeral, too, was held in the house the following Sunday afternoon.

The Prices left Sullivan Street in the early 1860s.  Their moving may have been the reason for the advertisement that appeared in The New York Herald on July 14, 1863.  "Wanted--By a respectable girl, a situation in a private family, as waitress or chambermaid and fine washer."

On January 29, 1876 the Taylors' seven-year old son died.  His funeral was held the following Sunday.   It would not be the last tragedy that year.   Apparently renting from the Taylors was the Prendt family.  On June 20 The New York Times reported "An inquest was held yesterday by Coroner Croker in the case of Henry S. Prendt, a boy, of No. 138 Sullivan street, who, while playing on a float at the foot of Charlton street, fell overboard and was drowned."  The jury ruled the death an accidental drowning.

Their son's devastating death may have prompted the Taylors to leave the Sullivan Street house.  By 1878 it was owned by Daniel Coffey, another police officer.   The Coffey family would retain possession of No. 138 Sullivan Street for decades.

Coffey was also well-known in political circles and in 1871 served as president of the Seventh Ward Hickory Club.  In 1878 son Charles E. Coffey was enrolled in the "Mechanical Course" at New York City College.  As their predecessors had done, the Coffey family rented a furnished rooms.   In 1878 a boarder named Blohm was looking for a job as a grocery clerk.

In 1881 a German furrier named Willegas boarded with the Coffeys.  Before he left Heidelberg, he had promised an co-worker, Henrich Zapke, he would help find him work once he was established.  The 35-year old Zapke had understandable reasons to leave Germany.

He had owned his own fur business and things had initially gone well.  Then, six months after he was married his bride died.  According to Mrs. Coffey later, "After her death he was unfortunate in business, and came to this country almost penniless to work at his trade."

In October 1881 he arrived in New York and, he too, rented a furnished room in the Coffey house.  Just as he promised Willegas landed Zapke a position with the fur store of Duncan, Ashe & Jaekel on Broadway.  But business slowed in the middle of December and Zapke lost his job.

His streak of bad luck, possibly coupled with the holidays, was apparently too much to bear.  On Christmas Day Zapke visited Willegas in his room and appeared "to be in his usual health and spirits," according to a newspaper.  But the following day he did not come out of his room.

Willegas peered through the window into his room and saw him hanging from a clothes rack.  A policeman was summoned, who found that the door was locked on the inside and a towel had been placed over the doorknob so no one could peer inside.

The New York Times reported "The door was broken in and Zapke was found quite dead."  With unnecessary detail the article said "His body was stiff, and decomposition had already begun, indicating that he had committed suicide during the previous night."

The dejected man's suicide had was not entirely due to finances.  His life's savings of $90 in cash was in his room (more than $2,100 today) along with a silver watch and chain.

Daniel Coffey retired from the Police Department on March 4, 1886, receiving a pension of $600 a year.  He augmented that income, about $15,600 today, with real estate investments in the neighborhood.  By the time of his retirement he had moved his family down the street to one of his properties, No. 84 Sullivan Street.   He retained possession of No. 138, operating it as a rooming house.  And it was about this time that he converted the basement to a store.

The changing times were reflected in one tenant's want ad in April 1892.  William Brosher wrote "Experienced young man wishes a situation as elevator runner."  And at the time of Brosher's ad, the Sullivan Street neighborhood was seeing a different type of change as it filled more and more with Italian immigrants.

The little house in the rear yard was rented to fruit seller Gaestono Ricchi and his wife, Maria, in 1893.  Maria's brother, Giuseppi Lendini and his wife lived a block away at No. 117 South Fifth Avenue (later renamed West Broadway).   What started out as a Sunday family dinner on July 2 ended in bloodshed.

According to The Sun the following day, "After dinner the men got drunk.  Ricci [sic] slapped his wife's face.  Lendini, as her brother, objected, and was told to mind his own business."  With Italian honor at stake, the confrontation escalated.

Lendini asserted "that he would allow no one to abuse his sister, whereupon Ricci [sic] knocked her down.  Then he turned to her brother and said: 'What are you going to do about it?'"

Lendini knocked his brother-in-law to the floor.  But when Ricchi got to his feet, he had a stiletto in his hand, which he stabbed into Lendini's left hand and head.  The wounded man responded by pulling out a revolver.

Ricchi ran into the yard as Lendini followed, firing the gun.  "Lendini, dripping with blood from his wounds, kept firing at Ricci [sic] and succeeded in hitting him three times," reported The Sun.  Lendini's wife, in the meantime, had run to the Prince Street police station for help.  By the time Patrolmen Kelly and Baker arrived, according to the newspaper, 400 to 500 neighbors were milling around in front of the house.

The New York Times report on the incident was brazenly stereotypical.  "Calabrians recreated yesterday afternoon in Camorra fashion in the basement of the rear house at 138 Sullivan Street, and two men were wounded.  As usual they kept their own counsel.  A vendetta murder may be the outcome."

The Sun reported that Ricchi's wounds were comparatively slight.  But, it said, "Lendina was taken to St. Vincent's Hospital with a hole in his lung, and is likely to die."  The Times was more casual, callously reporting "Honors were about even."

Daniel Coffey owned No. 138 Sullivan Street as late as 1912 when he took out a $10,000 mortgage on the property.  The names of his tenants in the pre-World War I years reflected the neighborhood now known as Little Italy:  Capazeli, Dalto, Motta and Longobardi among them.

Throughout the remainder of the 20th century renters came and went with little attention.  When the house was sold at auction in January 1920 it was described as a "three-story brick tenement and store."

But as the century drew to a close, the Sullivan Street neighborhood saw change once again.  Bordering the trendy Soho district to the south, it was home to the Autism Women's Network in 2012.  Today Arthouse NYC, self-described as "NYC's favorite pop-up concierge for art galleries...and just about anything imaginable," calls No. 138 home; while the basement level until recently housed GLLAM (Gallery La La Artisan Market).

Through it all the house that Charles Stewart erected around 1841 retains its early residential appearance on a much-changed block of Sullivan Street.