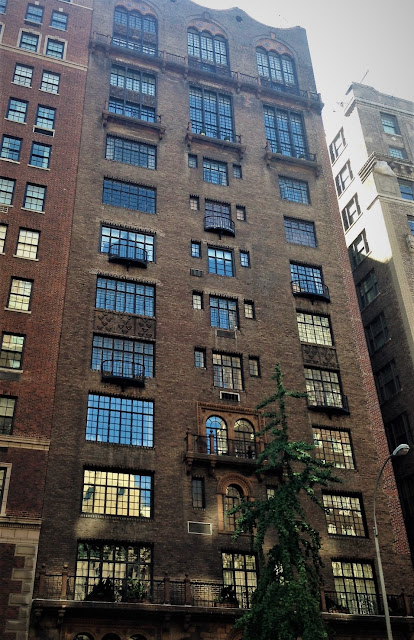 When George Jay Gould died on May 16, 1923 his son, Kingdon, was living with his family in a handsome home at No. 160 East 72nd Street.    The extended Gould family had inherited substantial personal fortunes from the estate of Kingdon's grandfather, multimillionaire Jay Gould.

Kingdon got his somewhat unusual first name from his mother, Edith M. Kingdon.  He had married Annunziata Camilla Maria Lucci on July 2, 1917 in St. Patrick's Cathedral and by now had two children, Silvia Annunziata and Edith Kingdon Gould.  A third child, Kingdon, Jr. was born in 1925.  The family also maintained a sprawling country estate at Lakewood, New Jersey.

The Goulds' lifestyle was about to change.  In 1927, the same year he sold his interests in family-owned mines in the West, he demolished the East 72nd Street mansion.  Gould's intention was not to relocate; but to modernize his family's living conditions.  Lavish apartment buildings designed with moneyed residents in mind had risen throughout the upper sections of the city since the late 19th century.  By now members of society's uppermost echelons lived in modern, spacious apartments the size of private homes.

Gould hired architects Taylor & Levi to design his building.  Completed in 1928 it rose 14 stories plus a penthouse.  The architects married a jazz age take on Renaissance architecture with elements of a Mediterranean villa.   Faced in ruddy-colored brick, it was highlighted by orange-toned stone and colorful terra cotta.  Leaded windows, balconettes and arched openings at the top floor worthy of a Medici provided a sense of age.  The design culminated in an unusual scalloped roofline topped with massive urns.


The building offered immense cooperative apartments.  There were just two each on the first four floors.  Each of the upper floors, through the 10th, contained just one 11-room apartment; and the 11th and 12th floors comprised a 17-room apartment that included a double-height music room.   The initial prices ranged from $14,000 to $51,000--the most expensive equaling about $715,000 today.


But the most impressive apartment was reserved for the Gould family.  Engulfing the top two floors plus the penthouse, it contained 20 rooms and 8 bathrooms.  The top floor included a screened terrace to the rear, another terrace at the front, and a squash-tennis court in between.   Kingdon's widowed mother was an artist and a penthouse level studio was included for her.

As intended, the building attracted well-to-do buyers.  Before construction was completed The New York Times noted that "Miss Carol N. Rhoades, daughter of Mr. and Mrs. Lyman Rhoades of 130 East Sixty-seventh Street" had purchased an apartment; and shortly afterwards Robert Le Roy traded his brownstone at No. 182 East 75th Street for an eighth floor co-op.

Le Roy was a partner in the legal firm of Cadwalader, Wickersham & Taft and the secretary of the Museum of the City of New York.  Both he and his wife, the former Grace A. Moore, had at one time been well-known tennis players who had won many trophies.  They had married in 1911.

At around 1:00 on the afternoon of January 16, 1932, while Robert was at work and Grace was out, the Le Roys' doorbell rang.   Mary Dolan, one of the three servants at home, opened the door to a man who blurted "Got a package for Mrs. Le Roy" and pushed past her.

Before the maid could speak, two other thugs barged in.  One brandished a pistol and forced Mary back to the servants' area.  She was soon joined by the cook, Amanda Kornder, and another maid, Anna Fagan.   While the terrified women were held at gunpoint, they could hear the other two men ransacking the apartment.

The Great Depression had little effect on most of the residents of No. 160 and Mary Le Roy had left the apartment decked out in expensive jewelry.  Nevertheless, the thieves were about to find about $10,300 worth of jewelry in her bedroom (more than $175,000 in today's dollars).   Police noted that they "overlooked, however, a considerable quantity of jewelry."  Before they left with their loot, they warned the three servants to keep quiet.

They had managed to get inside the building by sheer force.  According to the 60-year old service elevator operator, Frederick Spielberger, later, four men had entered the service entrance and ordered "Take us up to the eighth floor."  One of them pulled out a knife and forced Spielberger to the rear of the car while another bound his hands behind his back with picture wire.

While the criminal with the knife stood watch over Spielberger, the others went to the Le Roy apartment.  When they returned the elevator man noticed "they had two leather jewelry boxes and a small silver one, which they tucked inside their coats."  They took the elevator to the basement where one man removed the fuses so it could not be operated.  They warned Spielberger not to move for 15 minutes then rushed up the stairs to a waiting automobile.

The heist was just the first committed by the gang in rapid-fire succession.   When they robbed the home of Harry Glemby on January 21, it was the fourth within six days.  Among the other victims was William A. Rockefeller.

In the meantime, the Gould family entertained lavishly in their massive apartment. A dinner to celebrate the engagement of Priscilla St. George to Angier Biddle Duke, was given on December 26, 1936, for instance.  There were more than two dozen guests.  For more opulent affairs tents would be erected on the terraces. 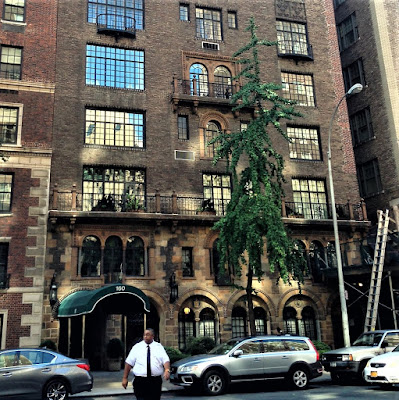 The wedding of Silvia Annunziata Gould to Charles Dabney Thomson, took place in the apartment on January 14, 1938.   The ceremony was set in the library, which had been outfitted with an altar draped in old Venetian lace.  An organ had been installed solely for the occasion.  Later that year the apartment was the scene of the debutante entertainments for Edith Kingdon Gould, including a dance on November 26.

That same year the Le Roys had a house guest, Mrs. Elsa Houtermans.  She became frantic when her son, a German citizen, was arrested in Russia.   She pleaded with Albert Einstein for his help.  He wrote to Mrs. Houtermans at the East 72nd Street address, enclosing a letter to the Russian ambassador in Washington he had written on her behalf.  "You can add some explanatory information about the career of your son and send both letters in the same envelope to the ambassador," he instructed.

1938 was also the year that Kingdon Gould suffered a stroke from which he never totally recovered.  In the fall of 1945 he became critically ill and died in the apartment on November 7 at the age of 58.

The Le Roys, whose country estate was in Glen Head, Long Island, were still in the building at the time.  Robert Le Roy was 61 years old when he died on September 8, 1946.

The following month the Gould apartment would be the scene of another wedding.  On October 12 Edith was married to Guy Martin in the two-story music room which, according to The Times, "had been arranged as a small chapel for the wedding."  Members of the wedding party came from as far away as London, Chicago, California and Washington DC.

At the time of Edith's wedding the building was populated by the families of financiers, lawyers and businessmen.  But by the 1960s at least one tenant from a far different profession--show business--had arrived.

Actress Joan Fontaine divided her time between her fifth floor apartment and her Eaton Square residence in London.   In the spring of 1966 she was in Britain, so she offered the apartment at No. 160 to Vivien Leigh and Jack Merivale who were appearing in the Broadway production of Anton Chekhov's Ivanov, directed by John Gielgud.    (Leigh and Merivale had been involved in an undisguised romantic relationship since 1958, even before her 1960 divorce from Lawrence Olivier.)   The two remained in the apartment throughout rehearsals and then for the five and a half weeks the play ran.

Artist Don Bachardy described visiting Fontaine's apartment in 1976 in his 2000 book Stars in My Eyes.   He eyed a red-varnished wooden armchair as a possible seat for the actress to pose.

I learned from her later that the tiger's head of the seat had been designed by Salvador Dali especially for her, and that she herself had executed the needlepoint work.  I asked if it would be a comfortable chair for her.  'Yes, perfectly.'  Her tone implied: Why else would it be in my sitting room?

While upscale apartment buildings of the 1920s in other parts of the city had suffered decline by now, such was not the case along East 72nd Street.  In the 1980s No. 160 was home to Princess Lee Radziwill, sister of Jacqueline Kennedy Onassis; Count Demetrio Guerrini-Maraldi (described by The New York Times as "an accomplished sportsman...a student of history, a linguist and raconteur, a man of discipline and high standards known for his wit and humor); and James Niven, son of screen actor David Niven.  Apartments at the time were priced at about $3 million.


The floorplan of Kingdon Gould's 1928 project remains unchanged.  Residents still enjoy the sprawling spaces and in many cases the handsome original interiors.   And casual passersby could not suspect that one of America's wealthiest families lived in 20 rooms here during the Depression years.