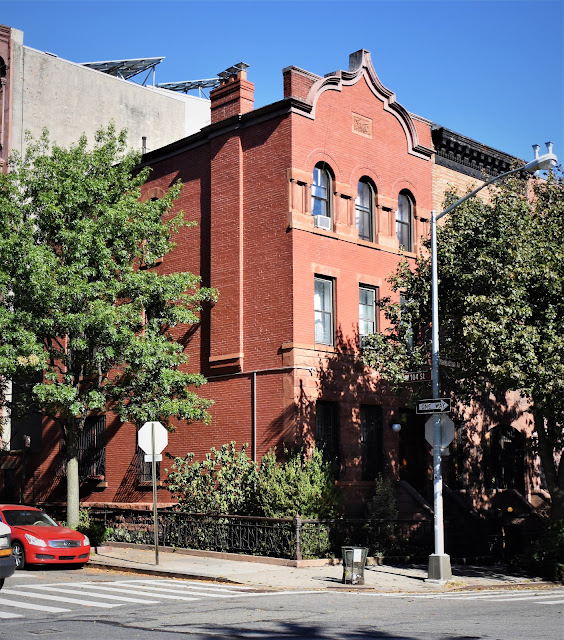 At the same time, in 1886, Edward L. Angell opened his architectural office.  His career would largely be spent designing structures on the Upper West Side.   The fledgling architect received a significant commission in 1889 when developer Joseph Turner hired him to design the 11 townhouses that would engulf the entire Manhattan Avenue blockfront from 104th to 105th Street.

Construction began in August 1889 and was completed just nine months later.  Angell married the popular Queen Anne and Romanesque Revival styles to create the picturesque row.  Acting as bookends of sorts, the end houses at Nos. 101 and 121 were mirror images.

The fronts of the houses were clad in rough-cut brownstone at the English basement and parlor levels.  Angell focused the restrained decoration of the warm brick upper facades to the top floor, where engaged brownstone columns separating the three arched openings implied an arcade.  He gave a nod to Manhattan's Dutch roots by added a brick and terra cotta scalloped Flemish Renaissance parapet.

Each house was slightly more than 19 feet wide--noticeably narrower than the average rowhouse--suggesting Turner intended them for middle-class families.  But the cost of construction, $10,000 each (more than a quarter of a million today) meant the end price was out of reach for those buyers.

The disparity seems to have taken a toll.  Six months after the houses were completed, on November 12, 1890, the entire row was sold at foreclosure auction.  Six of the houses--Nos. 101 through 111--were purchased by Otto Ernst and his wife, Marie, who leased them.

No. 101 became home to doctors, first to Dr. W. Muler and then Dr. Charles W. Gardiner.  Following the deaths of the Ernsts, the house was sold one more time, to Otto Gravenhorst in 1898, before Dr. Joseph Moorhead purchased it in February 1900.

Born in Ireland, both his father and grandfather had been physicians,  The Manhattan Avenue location was, perhaps, surprising considering that the 58-year old doctor was dedicated to serving the tenement district.   He had come to New York at the age of 23 and set up his practice on the Lower East Side.  Committed to his indigent patients, he maintained his Second Avenue medical office, making his commute from the Upper West Side long and difficult.

Moorhead and his wife, Mary Jane, had three daughters, Helen, Jane, and Mary, and a son John Joseph (an infant had died earlier).   John was 26 years old when his father purchased No. 101.  He, too, was a doctor and already had an impressive background.  He was valedictorian in his June 1890 class at the exclusive Trinity Chapel School, received his undergraduate degree from New York University, and won the Valentine Mott Gold Medal upon graduation from the University Medical College.  He was now an Attending Surgeon to the New York University and Bellevue Hospital Medical College clinic.

The bachelor doctor may have held an impressive position, but he could still be a puckish young man.  When he was asked to be an usher at the wedding of his friend, Perry Carter Pentz, to Ella M. Sanger, he and several other ushers plotted a prank.  The Sun explained on November 26, 1902 that the "jokers" intended "to follow the bride and bridegroom in three carriages, which were filled with boxes of rice, noodle hearts, old shoes, confetti and such things, and to advertise the marriage by a continuous shower of these articles."

Pentz was two steps ahead of his ushers, though.  First, he ensured he had "a very fast pair of horses to draw him and his bride."  Then he hired "six husky men" to wait in a carriage at West End Avenue and 102nd Street.  After the newlyweds' carriage passed, they pulled out to block the ushers' vehicles, then jumped out and held the reins of the pursuing carriage horses.

The Sun reported "The pursuers jumped out and gave battle but the six men held their own until the police came up.  The bluecoats were at first inclined to arrest the six brigands, but when the story came out they only laughed"

Moorhead and his cohorts had lost the trail of the newlyweds.  When they were unable to find them at any of the hotels, they "acknowledged themselves beaten and opened bottles at their own expense in a Twenty-sixth street restaurant."


That John's father approved of the publicity is questionable.  Deeply religious, for decades Joseph Moorhead was an elder of the Fifth Avenue Presbyterian Church.

Joseph Moorhead was beloved by the residents of the Lower East Side community where he would eventually be credited with bringing about 2,000 babies into the world.  He refused to charge his neediest families.

A heartbreaking example of the patients he treated was 7-year old Emma Hein.  Her family lived in a tenement at No. 407 East 19th Street in 1903.  On Monday afternoon June 16 her frantic parents called for Dr. Moorhead.   But the little girl was already dead.  The hot night before they had spent a penny on ice cream from a cart vendor as a treat for Emma.  Moorhead diagnosed the cause of her death as ptomaine poisoning, caused by "a small amount of green [i.e. tainted] ice cream eaten on Sunday night."

Moorhead may have intended to move his practice to the Manhattan Avenue address.  If so, he gave up the idea and by May 18, 1906 when daughter Mary was married to Thomas Henry Alison, he and Mary Jane had moved back to the Second Avenue house.  The wedding took place in their parlor.

In the meantime, John continued to live in the Manhattan Avenue house.  On October 31, 1907 he was married to Helen Armstrong Howell in the Rutgers Presbyterian Church on Broadway at 73rd Street.  Not surprisingly, Rev. Dr. J. Ross Stevenson of the Fifth Avenue Presbyterian Church officiated.

The 25-year old bride was well educated, having attended the private Brearley School in Manhattan, then Bryn Mawr College and the University of Grenoble in France.  The Woman's Who's Who of America noted the "favors woman suffrage" and "out-door sports."

By now John regularly published articles, like his "Injury by Electricity" that appeared in the April 2, 1910 issue of The Journal of the American Medical Association.  The increased industrial use of electricity had given rise to severe injuries and trauma to workers; the treatment of which doctors desperately needed to understand.

Later that year, in September, the Moorheads leased No. 101 to John H. Fisher and his wife.  The New York Blue Book still listed the couple here in 1911.

With the outbreak of war in Europe both John and Helen became involved well before the United States entered the conflict.  In 1914 he was in England, helping the British Army Medical Corps.  He told reporters on September 13 that he "was disappointed at not being able to go to the front."   The New York Times wrote "He offered his services, but they were declined on the ground that he was too old."  (He was 40 at the time.)  Helen was the Chairman of the Ladies' Auxiliary of the American Relief Committee.

In the meantime, Joseph continued to treat his patients from his Second Avenue office until finally retiring around 1923 at the age of 81.  It appears that he and Mary Jane moved in with John and Helen, and their daughter, Anne.  Mary Jane died in the Manhattan Avenue house on February 17, 1923.


In 1937 Cole Porter suffered a disastrous accident on Long Island when the horse he was riding fell on his legs, crushing them.  Reportedly actress Elsa Maxwell remarked to him in the hospital "It just goes to show fifty million Frenchmen can't be wrong.  They eat horses instead of ride them."


The composer's condition, however, was no laughing matter.  A team of doctors were convinced that his legs would have to be amputated.  Dr. John J. Moorhead was consulted.  He talked with Porter's wife who stressed that the loss of his legs would cause him devastating depression.

Moorhead promised to delay major treatment and, if fever did not set in, he would attempt to reconstruct the legs.  Porter later credited Moorhead with saving his life.  "He made me go back to work when I was still under drugs," he told friends.  And even though Porter was still wheelchair-bound, Moorhead pushed him to travel.

By now John's and Helen's marriage had failed.  When he married Alice Foote Fleischmann on August 22, 1938 The New York Times mentioned that he was "professor of Surgery at the New York Post Graduate and Reconstruction Hospitals, is the author of surgical textbooks and an autobiography."  The couple would not stay in the Manhattan Avenue house, however.  "After Sept. 15 they will make their home at 115 East Sixty-fourth Street."

It may have been John's planned travel to Honolulu to lecture physicians that prompted the sale of No. 101 in May 1941.  His first lecture was on Thursday, December 4 and was attended by some 300 doctors, about half of them from the Army and Navy.   His experiences in the First World War made his talks more relevant.

The 67-year old was scheduled to speak at 9:00 on Sunday morning, December 7, on the topic of "Burns."  With 50 doctors in the audience, bombs began raining on Pearl Harbor.   American journalist Blake Clark later recalled "Dr. Moorhead had recently demonstrated a new survival instrument that locates metal in the body.  The instrument proved its worth that morning, saving precious hours that would have been spent waiting for X rays to be developed." 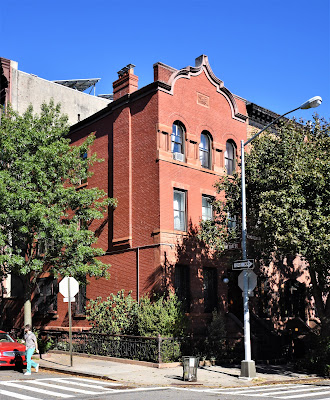 Perhaps because of its narrow proportions, No. 101 was never converted to apartments.  With some minor alterations, it is not significantly changed outwardly since it was home to the doctor with the incredible personal history.