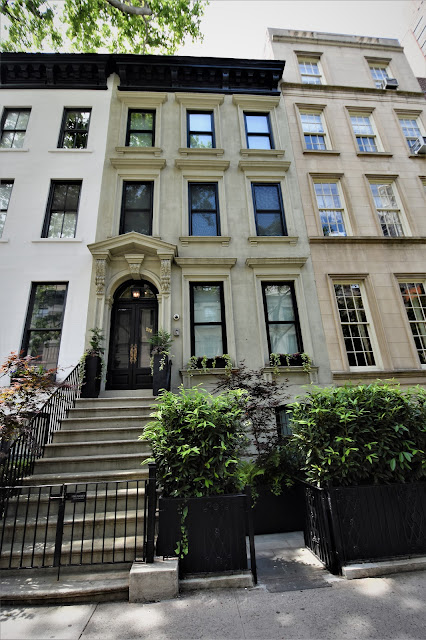 When Adam Tredwell (sometimes spelled Treadwell) died in 1852 his estate was valued at more than $400,000--about $12.8 million today.  Among his real estate holdings were about 24 acres of former farmland on the still undeveloped Upper East Side.  His heirs wasted no time in dividing the land into building plots and by 1854 were selling off the lots.

Construction and development ground to a near halt in New York City during the Civil War; but almost immediately afterward developers bought up tracts within the "Treadwell Farm."   In order to protect the value of their projected properties, 20 real estate operators came together and agreed on protective covenants.   They included standards for construction quality, height and width requirements, and the prohibition of undesirable businesses like saloons or factories.

Among the developers were brothers John and George Ruddell.  Between 1868 and 1870 they constructed 19 rowhouses on the south side of 62nd Street, between Second and Third Avenue.  Rather surprisingly, they used two architects--F. S. Barns designing nine of them, and James W. Pirrson responsible for two groups of five.

One of the Pirrson groups included Nos. 222 through 230.   The stone-faced Italianate houses were three stories high above an English basement.  The handsome arched entrances were capped with pediments supported by foliate brackets.  The architrave moldings of the windows were distinguished with prominent lintels, and cast modillioned cornices completed their dignified appearance.  At a cost to construct of $16,000 each--nearly $280,000 today--they were intended for upper middle class owners.

No. 222 was purchased by real estate broker Frederick Zittel.  With his partner, Walter B. Waldron, he did business from No. 1026 Third Avenue.   Zittel was married to the former Hattie J. Bodge.  Her widowed mother, Mary, moved in with the couple.

But the family had barely settled in before misfortune occurred.  Mary Bodge died on October 23, 1869 at the age of 77.  Her funeral was held in the house two days later.

On October 19, 1872 Zittel and Waldron dissolved their partnership.  A notice in The New York Herald assured clients "The real estate business heretofore existing under the name of Waldron & Zittel will be continued by Frederick Zittel, at the old stand."

The East 62nd Street house was the victim of a mysterious sneak thief in November 1874.   Zittel placed a notice in The New York Herald that offered "$20 reward and no questions asked--For return of Overcoat and Memorandum Book taken from 222 East Sixty-second street.  By returning the above to the house or to 1,026 Third avenue the above reward will be paid."

Andrew Yetter's businesses were diverse.  He was the president of the Atlas Storage Co., of the Globe Storage & Carpet Cleaning Co., and ran one of the several companies that did the city's street sprinkling.

Exactly why 14-year old Charles was out past midnight on May 21, 1882 is unclear.  But he was headed home on the Second Avenue streetcar with two friends that night.  Around 12:30 his friends said good night and disembarked at 59th Street.  Charles fell asleep, waking up suddenly just as the car passed 63rd Street.

When he realized he had just missed his stop, the teen jumped up and sprang from the moving streetcar.  The New York Times reported "He struck head foremost against one of the pillars of the elevated railroad and was thrown to the ground under the car, the wheels of which passed over his legs, severing them from his body."  The boy died in the Presbyterian Hospital later that morning.

The extent of Yetter's businesses was reflected in his constructing a six-story factory on East 61st Street in 1884, and a six-story storage warehouse in 1888.

After Nellie married James L. Hiller the newlyweds moved into the house with her parents.  And Andrew Yetter got a new business partner.  Hiller became an officer in the Globe Storage & Carpet Cleaning Co.

In what The New York Times deemed "its first change of ownership in sixty years," the Hillers sold the house in 1944.  The new owner was Major General Anson Conger Goodyear.  Despite his many accomplishments--he was a manufacturer, author, entrepreneur and philanthropist--he was best known as a founder and the first president of the Museum of Modern Art, and for his impressive collection of 20th century American and European art.

Its comparatively stuffy Victorian style made the house a surprising choice for Goodyear.  It stood in stark contrast to his sleek, modern summer estate in Old Westbury, Long Island--emblematic of his taste in art and architecture.  In 1938 Goodyear had commissioned Edward Durell Stone to design the International Style residence.   The completed structure, designed in part to exhibit Goodyear's art, was later described by The New Yorker architecture critic, Paul Goldberger, as "one of the most important houses built in the United States between the two world wars."


It was in the Old Westbury home that Goodyear was married to Zaidee C. Bliss in November 1950.  Goodyear was divorced from his first wife, Mary Martha Forman, and Zaidee's husband Cornelius N. Bliss, had died in 1949.  In reporting on the marriage, The New York Times announced "They are making their home here and at 222 East Sixty-second Street."

But the elderly couple (the groom was 73 years old) would spend little time in the city house.  Within the year No. 222 was home to Austrian-born artist Rudolf Anton Bernatschke and his wife, Wynne.   Best known for his portraits of politicians, celebrities and statesmen, including General Douglas MacArthur, and Senators Robert Taft and Joseph McCarty.  His diverse sitters ranged from Gypsy Rose Lee to Cardinal Spellman and Gary Cooper.

Bernatschke died on August 22, 2010.  No. 222 East 62nd Street was almost immediately offered for sale.  By now it was the last of Pirrson's 1868 row that had not been substantially altered; other than new iron railings and and a coat of gray-white paint. 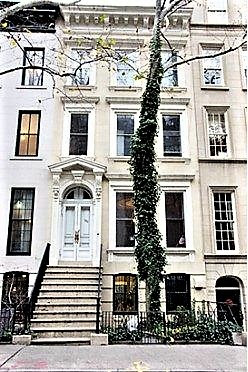 It was purchased by the Republic of France as the home of Francois Delattre, the French Ambassador to the United Nations.   In reporting on the $13.9 million sale, The Observer mentioned the house "has five bedrooms and seven and a half bathrooms plus staff quarters" and "an elevator from the basement to the penthouse." 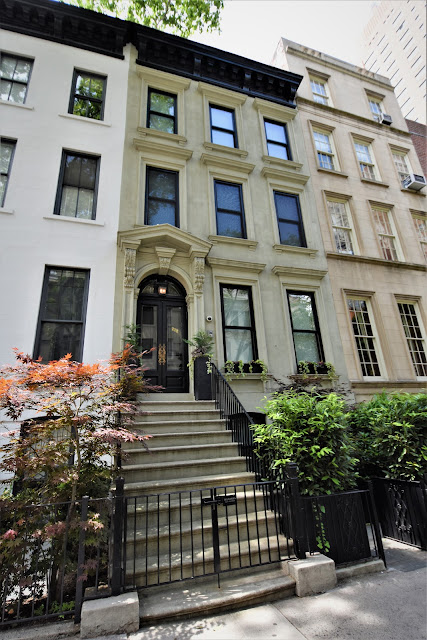 The handful of owners of No. 222 resulted in its escaping modernization; giving us a clear image of what the block looked like in the first years after the Civil War.