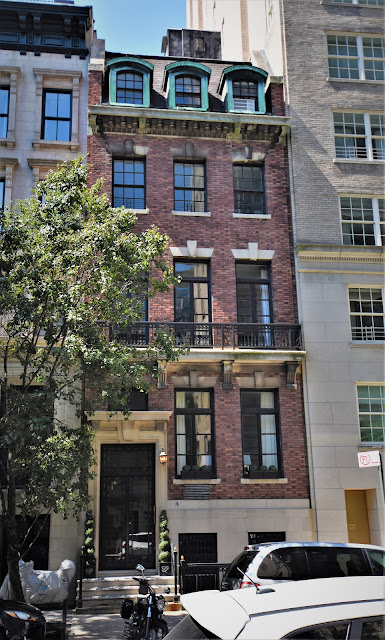 Brothers William B. and Ambrose M. Parsons hired architects Thom & Wilson to design a row of 11 brownstone residences on East 81st Street between Fifth and Madison Avenues in 1883.  The high-stooped, neo-Grec homes were completed the following year.

The homes within the ambitious row were intended for financially-comfortable families.   The 20-foot wide, brownstone clad houses were four stories high above an English basement.  Their neo-Grec architecture featured windows with architrave surrounds sitting on diminutive brackets, and handsome sheet metal cornices with four paired brackets.

Rather amazingly, every one of the 11 houses sold within a one week period in April 1884.  Isaac Rosenstein paid $40,850 for No. 4--just over $1 million today.   Rosenstein was the principal in the clothing "ready-made clothing" manufacturer Isaac Rosenstein & Co. at No. 23 White Street.  The firm made boys' and men's shirts for working class customers, such as "cotton shirts, flannel shirts," and "jean shirts."

Like other well-to-do Jewish families, the Rosensteins were limited mainly to Jewish social circles.  They were among the patrons of the lavish ball of the Young Ladies and Gentlemen's League of the Montefiore Home in Carnegie Hall in January 1895.  The New York Times said "The ball promises to be the most brilliant event in Jewish society this season."  Providing the music that evening was Victor Herbert.

The Rosensteins remained in the 81st Street house for 15 years, moving to No. 16 East 96th Street in 1901.  They sold the house in April to the wealthy widow, Mary Herschfield, who lived here quietly until 1905.  That year she sold it to Cornelius Fellowes and his wife, the former Caroline Suydam Whitney.  The couple had two children, 26-year old Cornelius, Jr. and Carolyn Whitney Fellowes, who was 23.

Fellowes was born in 1840 in Louisville, Kentucky, and was educated at Columbia University.  He amassed his fortune in the stock and cotton brokerage firm of Fellowes, Davis & Co.  He had retired in 1890 and was now best known for his affiliation with the fashionable National Horse Show.  He was also secretary of the Coney Island Jockey Club and rubbed shoulders with other prominent horse owners like August Belmont, William C. Whitney, Pierre Lorillard and Alfred Vanderbilt, just a few of the millionaires The New York Times deemed Fellowes's "intimate friends."

When the Fellowes purchased No. 4 it was decidedly out of fashion, architecturally speaking.  The architectural firm of Foster, Gade & Graham was called in to remedy that problem.  In April 1906 plans were filed.  The Real Estate Record & Builders' Guide reported on the alterations.  "The rear and front will be enlarged with a 3 and 4-story extension, light shafts, stairs and other interior changes."

At the time the frothy French Beaux Arts style was falling out of favor among wealthy New Yorkers.  Millionaires like Andrew Carnegie and Paul Tuckerman were living in neo-Georgian mansions that hearkened back to Colonial days.  Foster, Gade & Graham's redo of the Fellowes house, completed within the year, would follow the trend.

The stoop was removed and the facade pulled forward to the property line.  The entrance was now located above a shallow stoop, slightly higher than the sidewalk level.   The red brick was laid in Flemish bond, to mimic age, and splayed limestone lintels carried on the early 19th century motif.  Three copper-clad dormers perched on the stone cornice.

The renovations were completed just in time for Carolyn's important society wedding.  On June 9, 1908 she was married in Grace Church.  The reception was held later in the East 81st Street residence.  Society pages were, perhaps, less interested in the bride than the groom.   Richard Lewis Morris was the son of Dr. Stuyvesant Fish Morris.  The separate components of his name alone constituted a significant representation old New York society.

Cornelius Fellowes was suffering from arterio-sclerosis at the time of the wedding.  That winter his health forced him to step down as president of the National Horse Show and as officer in The Jockey Club.  In February 1909 he took a severe turn for the worse, and fell into unconsciousness on April 27.  He died three days later without regaining consciousness.

Caroline did not remain in the house she had planned and shared with her husband.  Beginning in October 1910 she leased it to a succession of well-heeled tenants.  In June 1912 Franklin Delano Williams signed a lease "for a term of years."

Williams was a cotton goods merchant with a highly-interesting background.  He was born in Hong Kong in 1855.  His father, Franklin D. Williams, Sr., was a founder of the China export trading firm Wetmore, Williams & Co.  The family moved to Boston in 1861 where Franklin was educated.  He married Ruth Morse and the couple had one child, Mary Nelson Williams.  She was married in Boston in 1882 to lawyer Henry Ware Putnam.

Williams became a member of the cotton manufacturing firm Wellington, Sears & Co.  The family spent their summers in their Newport estate known as Wyn Wyc Cottage.  When they moved into the 81st Street house they had been living in New York only about three years.

Caroline Fellowes continued to lease the house.  In 1915 it was rented by J. F. A. Clark, a member of the brokerage firm Clark, Childs & Co.   Like the Williams family, the Clarks summered in Newport.

Caroline Suydam Whitney Fellowes died in her stylish apartment at No. 1049 Park Avenue at the age of 70 on September 22, 1922.   She had sold No. 4 the year before to esteemed architect John Russell Pope.

Even if Pope had not been an acclaimed architect, his and his wife's names would have been well known, socially.  Both Southerners by birth, they were considered by The New York Herald to be "a prominent part in the summer life of Newport."  John's father, also named John, was a successful portrait artist whose subjects included Henry Ward Beecher, actor Edwin Booth, and Secretary of War Edward McMasters.  Sarah Pope was the daughter of millionaire Pembroke Jones and Sarah Wharton Green.

Somewhat interestingly, Pope had also purchased the 50-foot wide lot on the corner of Fifth Avenue and 96th Street around the same time where, according to the New-York Tribune, he "intended to erect a home on the site for his own occupancy."

The Popes' change in plans may have had to do with the devastating tragedy which occurred shortly after they took possession of No. 4.   Around the first of March, 1922 little 7-year old Sarah Pope complained of stomach pains.  Within the week, on March 6, she had died of peritonitis.

Rather surprisingly, only five weeks later the house was the scene of the wedding of Sarah Pope's mother.  Pembroke Jones had died in January 1919.  On April 11 Sarah Green Jones married an old family friend, Henry Walters, described by The New York Herald the following day as "railroad executive, yachtsman and noted art connoisseur."

Two years later another family wedding would take place here.  John's sister, Minga, married Robert Halsey Patchin on April 4, 1924.  Both the bride and groom were widowed and the ceremony in the 81st Street house was subdued.  The Times noted that "relatives and a few intimate friends will be present."

On October 6, 1925 Pope received a notable commission when it was reported he had "won the competition for a design for the Roosevelt Memorial to be erected in Washington."  It was the first of several important D.C. structures he would design, including the Jefferson Memorial, the National Archives, and the West Building of the National Gallery of Art.

The Popes' two daughters, Jane and Mary, were in their teens now and were being readied for society.  On April 24, 1930 the New York Evening Post mentioned that the family "are sailing for Europe tomorrow on the Majestic.  They will return the middle of the summer to go to Newport."  The family may have made their trip somewhat short because Mary's 19th birthday was in August and her debut would soon follow.


Sarah Walters gave her granddaughter a lavish birthday present in Newport--a new coupe automobile.  One week later, at around 6:00 on the evening of August 18, Mary was driving her new car with Adelaide F. Whitehouse along for the ride.  At the corner of Eustis Avenue and Old Beach Road, she collided with the car driven by James W. Sullivan, Jr.  According to Sullivan's report, after Mary's car struck his, it "swerved and turned over two or three times."  Adelaide was thrown from the car, but Mary was trapped inside.

She suffered a skull fracture and was taken to the Newport Hospital where she died.

Five years later, in August 1935, Jean Landon Pope's debut was celebrated with a ball in August 1935 at the Popes' Newport estate, The Waves.  (John had designed the lavish Newport in 1927.)

On August 27, 1937, John Russell Pope died at the age of 63.  His reputation as an architect was deemed by The Times as "international."  King George VI of Britain referred to his Tate Gallery in London as "the world's finest sculpture gallery."

Sarah inherited the entire estate, valued at $812,974 (around $13.6 million today).  Pope had explained in his will that Jean Landon Pope, his only surviving daughter, "is otherwise provided for" and said "I am confident that my wife will act for her best interests."

A reception was held in the 81st Street house following Jean's wedding to Navy war hero Anthony B. Akers in St. Thomas Episcopal Church on November 28, 1942.  Now alone, Sarah lived on here until 1949 when she sold it to Benjamin Gladwin.  He announced his intentions "for converting [it] into eleven modern apartments."

The renovations were completed in 1950, with two apartments each in the basement through fourth floors, and a single apartment on the fifth. 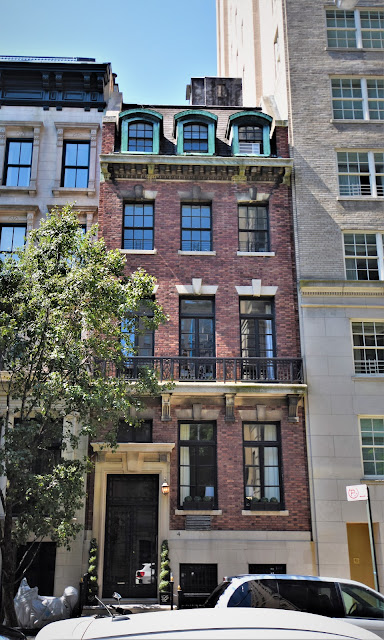 Outwardly little has changed to the house since Cornelius Fellowes made his dramatic changes in 1906.