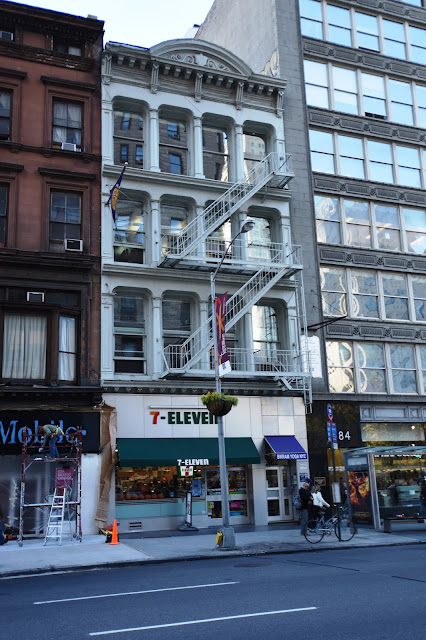 Marshall Pepoon had amassed a sizable personal fortune in the years just before the outbreak of Civil War.  Married to the former Charlotte A. Mildeberger, he was a partner with John P. Nazro in the brokerage firm of Pepoon & Nazro at No. 12 Wall Street, and held directorships in the Grocers’ Fire Insurance Company and the North River Bank.

By now the exclusive mansion district of lower Fifth Avenue was creeping northward towards 23rd Street.  In 1857 the Pepoons began construction of a stylish 28-foot wide brownstone mansion at No. 182 Fifth Avenue.

The title of the new mansion, completed in 1858, was put in the name of Charlotte, whom Marshall fondly called both Lottie and Dottie.  As was the case with moneyed New Yorkers, the couple collected artwork to display in their home.  But unlike many, who relied on dealers and buyers, the Pepoons traveled extensively throughout Europe personally choosing their paintings and sculptures.

Marshall Pepoon’s diary mentions little sightseeing.  Instead time was spent in museums and shops, driving through the Bois de Boulogne in Paris, and having custom clothing made.  Pepoon was especially taken with the Egyptian galleries of the Louvre and had jewelry created for himself and Charlotte that incorporated scarabs, intaglios and cameos.

It was most likely one such trip that accounted for Robert J. Livingston’s living at No. 182 Fifth Avenue during the winter season of 1861.  Grand homes were often leased in the owners’ absence, not so much for the needed income, but for the security of having the residences inhabited.  While here Livingston continued his passionate involvement with the Children’s Aid Society, while also turning his attention to war relief.  That year he donated $100 to The Woman’s Central Association of Relief for the Army.

On July 20, 1866 Charlotte wrote her will, leaving “that certain house and lot in the City of New York, where I now reside, known as No. 182 Fifth Avenue,” to “my beloved husband Marshall Pepoon, for his life.”   The couple was childless, prompting Charlotte to add “and after his decease to my beloved niece, Margaret A. Tooker.”

The walls of the Pepoon mansion were hung with an impressive collection ranging from Old Masters to contemporary paintings.  Included were works by Holbein, Corregio, Cignani Carlo, Peter Breughel, Nicolas Poussin and George Inness.

By 1870 a major change was being seen along this stretch of Fifth Avenue.  Already commercial interests were pushing Manhattan’s millionaires further up the avenue.  In 1871 the Pepoons, too, abandoned their fine home, packing their artwork and furnishings and moving on.

That year they leased the house to Hugh B. Jackson for a term of 20 years.  Jackson had run his high-end grocery business from the nearby Fifth Avenue Hotel building for many years.  He commissioned architect Thomas R. Jackson to renovate No. 182 Fifth Avenue for business purposes.

Born in England, Thomas R. Jackson had come to America as a child with his parents.  He had held the position of head draftsman in the office of esteemed architect Richard Upjohn and worked with him on the design of Trinity Church.  He now had his own practice and was responsible for a wide-range of buildings.

The architect reconfigured the interiors and removed the brownstone front and stoop.  A modern cast iron façade, similar to those being erected rapid-fire further downtown, was attached.  In December 1871 Hugh B. Jackson announced in The National Quarterly Review that he had moved his “well-known establishment” to the new location.

He referred to the converted structure as “a handsome spacious iron front building [designed] especially to meet the requirements of the large increase in his business.  The new establishment will be provided with vaults, and all other appliances which science and experience have proved to be necessary for such a business.”

His announcement added “Mr. Jackson trusts it is needless for him to speak of the qualities of his Teas, Coffees, Wines, Fruits, Sauces, Condiment, &c., further than to assure his customers that he will continue to exert himself more and more to secure for them the best the European and American markets afford.” 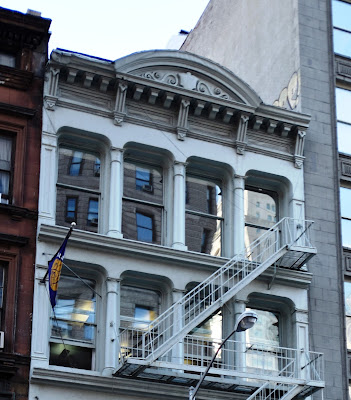 Although she no longer lived here, Charlotte Pepoon used the address when she signed a petition to have Fifth Avenue resurfaced in 1875.  The petition sought to have it “repaved with such materials, and in such manner, as to produce neither mud nor dust, and also, to be smooth, comparatively noiseless, and easily kept clean.”

Despite his 20-year lease, Hugh Jackson was gone by 1880.  In the sidewalk level was W. Iauch’s “ladies’ restaurant and confectionery."  Upstairs were the tailor-merchant W. R. Bowne, who would stay on well into the 1890s; and several publishing firms.

Among the latter was the manufacturing department of G. P. Putnam’s Sons.  Here the firm did outside work for “every description of printing and book manufacturing.”  In 1880 an advertisement promised “Doing this work upon their Fifth Avenue premises, and under their personal supervision, they are enabled to fill all orders entrusted to them in the best manner and at moderate prices.”

By 1890 the firm had become Frederick A. Stokes & Brother.  That year it published Charles Driaste’s novel Gondola and Palace; the book of humor titled The Good Things of Life; and patriotic-themed My Country ‘Tis of Thee by Samuel F. Smith; Babes of the Nations; and The Star Spangled Banner, “with music.”

By 1891 the publishers were joined in the building by one of New York’s oldest booksellers, A. D. F. Randolph & Co.   The New York Times noted that the store “carried a large stock.”  Anson D. F. Randolph, the senior member of the firm, had been in the bookselling business since 1850.   The bookstore remained here until February 1, 1896 when, owing to the 72-year old Randolph’s failing health, the retail business was sold to the American Baptist Publication Society.

In addition to the bookstore the American Baptist Publication Society took space for meetings.  On March 3, 1896 The New York Times reported that the “regular weekly meeting of the Baptist ministers of New-York and vicinity was held in the new hall at 182 Fifth Avenue yesterday.”

The ministers’ meetings would continue here for years; while the bookstore offered both everyday and seasonal items to Fifth Avenue shoppers.  On December 17, 1898 an advertisement in The Sun prompted readers to “Buy your Calendars, Christmas Cards, and Holiday Books at the American Baptist Publication Society.”

As the new century progressed, things in the Flatiron neighborhood of Fifth Avenue declined.  The shops which once housed the dressmakers, bookstores and art galleries patronized by New York’s carriage trade were gone by the 1940s.

In 1940 the upper floors of No. 182 Fifth Avenue housed the apparel factory of the Empire-Bilt Clothing Co. and downstairs at street level was a poolroom.  A gutsy group of would-be bandits tried to hold up the poolroom on the afternoon of May 7, 1943; with unexpected results.

Two men strolled into the place around noon and started to play.  About 40 minutes later two others entered.  One of them, 27-year old Millan Kovarick, an ex-convict on parole, flashed “an old-style Army automatic pistol” and announced “This is a stick-up.”

The three robbers then started to herd the 15 customers to the rear room.  But they were unprepared for the street-tough pool players’ reactions.

“Michael Walsh, 52…balked, and his cue-stick came down on the leaders’ head.  The other victims took heart and in a short, swift battle knocked the pistol from the gangster’s hand and all of the gang fled.”

The patrons rushed out onto Fifth Avenue and yelled “Stick Up!”  Their cries were heard by two patrolmen, both 66 years old, half a block away.  Calling Officers Sydney E. Hutchins and John C. Matthews “slow of foot, but proudly wearing their medals for marksmanship,” The New York Times recounted how they chased Kovarick into the subway at 22nd Street.

“We knew we had him,” Hutchins told reporters, “It’s only a turnstile exit.  The entrance is a block away.”

The parolee earned himself another 11 years in the State penitentiary.

In 1956 a restaurant opened in the former poolroom while the upper floors were still designated as “factory” spaces.

In the mid 1960s No. 182 was home to the Off Broadway theater, the Anthony Mannino Repertory Club.  At the same time one of the upper lofts was taken by figurative artist Alex Katz.

The theater space became the ETC Theater Company around 1975.  Today the mixed-use structure houses a yoga studio, residential lofts and a convenience store behind a regrettable modern storefront.  But the upper floors remain relatively unchanged since Thomas R. Jackson bolted his cast iron front onto the Pepoon mansion in 1871.