By the first decade of the 20th century, actor Henry Miller was not only a leading man, but a successful theatrical manager.  Miller could not have overlooked the trend of stage stars like Maxine Elliot, John Wallack and Edward Harrigan erecting and operating their own theaters.

Backed by the wealthy socialite and philanthropist Elizabeth Milbank Anderson, Miller laid plans for a Times Square theater around 1913 when the old brownstone home of Sarah M. Moore at No. 124 West 43rd Street, between Broadway and Sixth Avenue, became available.  It was an unexpected move for Anderson—she was more well-known for her activism and financial support of public health, women’s education, and African-American education.

Felix Isman first purchased the Moore house, adding to his 43rd Street holdings that now stretched from No. 124 through 130.  His intention was to erect “a large theatrical enterprise, which later, however, failed to develop,” explained the Real Estate Record & Builders’ Guide in 1916.

Instead, in December that year Elizabeth Milbank Anderson purchased the plots, then leased the property to Henry Miller “for twenty one years with renewal privileges.”  The Record & Guide reported “a new theatre will be erected in West 43d street by Henry Miller for the presentation of his own plays.”   It added “The amount involved in the sale, lease and the erection of the new building will approximate $1,000,000.”

Miller assembled what was a team, of sorts, of architects.  On January 6, 1918 The Sun reported “The architects are Paul R. Allen, in association with Henry Creighton Ingalls and F. Burrall Hoffman, who, jointly or individually, were responsible for the Century, Winthrop Ames’s Little Theatre and the Globe Theatre.”  Almost equally important in the designing process was Miller, himself.  “Many of Mr. Miller’s ideas as to what a theatre ought to be, gained in his years of experience in his profession, are embodied in the theatre,” said The Sun.

The rapid-fire construction of theaters in the Times Square area had, by now, jaded reporters.  On January 6, 1918, as the building neared completion, the New-York Tribune wrote “New York is no longer surprised at the opening of a new theater, and none will interest the theatergoer more than Henry Miller’s Theatre in West Forty-third Street.”  The newspaper held out hope that this one would stand out.  “The actor manager’s prominence in his profession holds out the promise that his theatre, which has been constructed under his direction and embodies many of his ideas, will be something rather out of the ordinary.”

The Sun agreed.  That same day it opined “Many theatres have been opened in New York in the last few years and several are at present under construction.  The novelty has almost worn off, still there is something about Henry Miller’s Theatre that makes it different from many others.”

The interior followed suit; “Adam in design,” with a color scheme of “old ivory and antique gold.”  The auditorium was capable of seating 1,000 and the double balcony suggested a modern motion picture palace rather than a legitimate theater.   With a good-hearted jab at audience members who customarily strained to see what others were wearing or with whom they arrived, it was announced that all 200 patrons sitting in the balconies “will be able to see the stage even if they do not get a good view of the rest of the audience.”

The Henry Miller’s Theatre opened on the night of April 1, 1918 with Louis Evan Shipman’s The Fountain of Youth.  Critics applauded the new venue.  The Sun reported “There are ample taste and comfort, convenience and illusion of the various departments of the Henry Miller Theatre, so there is no deficiency to be noted there.”

Critic Heywood Broun agreed (although he would have chosen a different curtain).  “It is an excellent thing for New York that Henry Miller should have his own theatre, for he is a good actor and a conscientious one.  His theatre, the Henry Miller, is a delight, if you don’t mind the curtain too much.  The smoking room is certainly the finest in town.”

Broun panned the show, however.  “Louis Evan Shipman has endeavored to create an atmosphere of mellow gayety.  Instead, he gains the effect of a middle-aged Methodist minister making his first address to the young men of the Boys’ Club down in the church gymnasium.”

The New York Times agreed regarding the new auditorium; while being a bit kinder about the play itself.  “At the opening of Henry Miller’s Theatre last night good taste was lapped in luxury as seldom before.  Every detail of the new house is studied with intelligent regard to comfort of the body and repose of the eye.”  The critic said of The Fountain of Youth “the little comedy of the evening is slight indeed.” 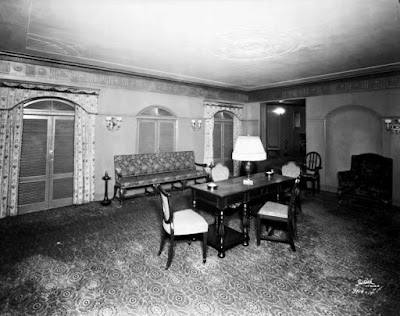 Almost immediately following the theater’s opening, a blind man began peddling his pencils on the sidewalk outside.  Henry Miller had compassion for Joseph Hahn and The New York Times, years later, mentioned that “Frequently overzealous patrolmen have attempted to chase the blind man from his post, but on every occasion Mr. Miller had gone to his aid and got back Han’s theatre stand for him.”

Elizabeth Milbank Anderson died in 1921 leaving an estate of about $7 million, most of which was left to charity.  The land under the Henry Miller’s Theatre was sold by the estate in March 1922 for about $570,000.  The change in property ownership was not noticed by theater-goers; for now it simply meant that Henry Miller’s rent checks were payable to a different landlord.

Miller starred in most of the plays produced here, and managed to book some of the most recognized names in the American theater.   The matinee performance of Romeo and Juliet on April 19, 1923 marked Jane Cowl’s 100th performance as Juliet.  The actress was presented with a reproduction of the 1623 edition of Shakespeare’s play in the possession of the Duke of Devonshire.  She donated all the proceeds of the following Monday’s performance to establish a memorial to Sarah Bernhardt.

Helen Hayes appeared the following year in Quarantine.  Norman-Bel Geddes designed the impressive sets.  As expected, her performance was stellar.  The New York Times reported on December 16, 1924 “Helen Hayes at Henry Miller’s Theatre last night appeared to hold most of her audience in her hand and to tie them into rosy and ingenious love knots whenever she liked.”

On Monday evening, April 5, 1926 Henry Miller prepared to open in a new play here, A Stranger in the House, He was still suffering from a cold he had contracted in Baltimore; but according to The New York Times later, “He did not regard it as serious enough to prevent him from appearing the opening night and went to the theatre about 6 o’clock.”

Shortly after arriving, the actor became ill and his doctor, Edward Cussler, was called.  Miller was taken to this apartment at No. 101 West 57th Street and opening night went on without him.  The following morning he was taken to New York Hospital, where he was diagnosed with pneumonia in the right lung.  At around 11:15 on the night of April 9 he died.

Miller’s funeral was originally schedule to take place in the Church of the Transfiguration, known as “The Little Church Around the Corner,” or “The Actor’s Church,” on Monday April 12.   The services were moved to Tuesday; a change that one mourner missed.

Joseph Hahn, the blind pencil vendor, sat for an hour in the church until someone realized the situation and informed him of the postponement of the funeral.  After nearly two decades, Hahn still operated his little stand in front of the theater.

Ironically, when the hundreds of prominent men and women from the theatrical profession filed into the church the following morning, a policeman barred Joseph Hahn.   The poor blind man's threadbare clothing stood out among the well-dressed crowd.  But, as Henry Miller had done so many times, a friend came to Hahn’s rescue and escorted him into the church.  Among the celebrity mourners were George M. Cohan, Channing Pollock, Amelia Bingham, Ina Claire, Otis Skinner, David Belasco, John Drew and A. L. Erlanger.

While many Broadway theaters suffered heavily during the Great Depression, Henry Miller’s Theatre kept on with respected plays and headlining actors.  Among those who played here were Leslie Howard, Lillian Gish, Douglas Fairbanks, and Ruth Chatterton.  Nevertheless, on June 20, 1931 management announced that “the best seats” had been reduced from $3.85 to $3.

In the early 1960s the theater was still presenting big names.  On May 13, 1964 Josephine Baker opened her 24-run show.  The day after that performance ended, Helen Hayes, now 64 years old, returned to the Henry Miller in The White House, co-starring James Daly.  Later that year Arnold Scaasi opened in P.S. I Love You; and in November it was announced that Auntie Mame would open on February 10, 1965.

Two days after the opening of Auntie Mame, 80-year old Gilbert Miller confirmed reports that the Henry Miller’s Theatre was for sale.    On April 20, 1966 The New York Times reported that it had been sold to H. William Fitelson, a lawyer, for $625,000.

Legitimate theater soon gave way to art movies.  But the deteriorating condition of West 43rd Street took its toll.   By the 1970s the former Henry Miller’s Theatre (it was renamed a few times, including the Park-Miller and the Avon-at-the-Hudson Theater), had become a seedy pornographic movie venue.

Howard Stein closed down the movie theater in 1977, gutted the auditorium in a $2 million conversion, and reopened it in June 1978 as Xenon, a disco that rivaled Studio 54.  When that club closed, it was resurrected as Shout in the late 1980s, and Club Expo in the ‘90s.

Conditions were encapsulated in a single sentence in The New York Times in 1996: “Neighbors complain that rowdy teen-agers frequent Club Expo, a nightclub at 124 West 43d Street, where a 23-year-old patron was stabbed to death with a broken bottle in April.”

It appeared that the beleaguered theater was breathing new life when a stage revival of Cabaret opened in 1998 following the closure of Club Expo.  A remodeling of the interior reflected the war-time Germany sets.  The theater was renamed the Kit Kat Klub, echoing the Cabaret theme.  The last play produced in Henry Miller’s 1918 auditorium was Urinetown, which opened in 2001.

The theater was closed and demolished 2004 for construction of the 55-story Bank of America Tower facing Bryant Park.  The façade was preserved as the face of a new 1,055 seat theater within the new building.  It was named the Stephen Sondheim Theater in 2010 on the composer-lyricist’s 80th birthday.

While facadism—the practice of preserving only the façade of a historic building while demolishing the rest—is routinely decried by preservation purists; at least the elegant neo-Georgian front survives despite the lamentable cost.
Posted by Tom Miller at 3:28 AM