A membership in one or more of the exclusive men’s clubs was a social necessity for wealthy gentlemen in the decades preceding the outbreak of Civil War.  As the century progressed, other clubs that were not purely social were founded—university clubs, professional clubs, and sporting clubs, for instance.

Among the latter was the Manhattan Athletic Club; an organization for sporty sons of millionaires who pursued a broad array of activities from robust sports like swimming, boxing, and track and field events, to the less physically-taxing billiards and pool.  The club was organized in November 1877 and for several years maintained an exclusive membership of just 33.  In 1880 the small group moved into its clubhouse at No. 524 Fifth Avenue.

The financial standing of the 33 members was evidenced in the rent--$9,000 a year—and the salaries paid to the staff of $7,000 a year.  That yearly overhead alone would amount to about $382,000 today.   Little by little, however, the original group opened its rosters to new members and by 1888 there were 1,500 members in total.

The staggering increase in membership meant, of course, that the old Fifth Avenue clubhouse was no longer adequate.    On August 3, 1888 The New York Times reported that the club had purchased the old Gospel Tabernacle Church on the southeast corner of Madison Avenue and 45th Street for $160,000.  The newspaper noted “The church will be torn down and a magnificent clubhouse built on the site.”

By the time the transfer of the property was announced, the confident club had already procured its architect and plans were in the works.  Peter J. Lauritzen was awarded the commission.  The young architect was currently working on another clubhouse—the lavish Union Club in Brooklyn—and the two buildings would reflect great similarities.

The New York Times offered its description of the proposed edifice.  “The new clubhouse will be a substantial five-story brick structure, with stone trimmings…The main entrance will be by broad white marble steps on Madison-avenue.  In the basement will be the plunge [swimming pool] and Turkish baths, a long-range shooting gallery, and say the club people, the finest bowling alley in the country.”

The one-ton cornerstone was laid on July 9, 1889 by Mayor Hugh J. Grant.  The Times wrote that given the size of the stone, the building committee “wisely gave his Honor the assistance of a derrick, the contractor, and a halfscore of brawny laborers to place it."

Lauritzen had promised “elegant parlors” modeled after the Union League Club which would take up half of the first floor; the other half given over to the pool and billiard room.  Half of the second and third floors was used for the two-story auditorium, “the lyceum;” and the remainder of those floors would contain private rooms for members.

Readers of the article got their first hint at the remarkably clever innovations to come.  “The auditorium will be so arranged that it can be quickly changed into a lawn tennis court.”  The fourth floor was nearly all members’ suites; and the fifth floor was occupied almost entirely by the gymnasium.

Nine days before the construction was completed The New York Times deemed the Manhattan Athletic Club’s new headquarters “the finest clubhouse of its kind in the world and [it] compares favorably with the houses of the leading social clubs of this city.”

Lauritzen had produced a hefty brick. “red stone” and brownstone Romanesque Revival pile of turrets, a top floor loggia, arches, a “mosque-like tower,” and terra cotta trim.  An immense lion’s head, situated over a handsome juliette balcony on the corner of the second floor, had been exhibited in the Academy of Fine Arts in Philadelphia.  The Real Estate Record and Builders’ Guide noted “The avenue front is surmounted by a Spanish tiled roof, supported on massive columns, elevated sufficiently to make a roof garden and tennis courts.”

Inside were all the requisite rooms for an upscale social club—parlors, reading, smoking, and card rooms among them.  But The Guide pointed out that the architect’s focus was necessarily on the sporting activities of the members.  The 100 by 110 foot gymnasium had “all the known appliances, with a running track six feet wide, placed about twelve feet above the floor.”  The gymnasium was lit by an immense skylight.  On the same floor were boxing and fencing rooms and 1,000 lockers “and other conveniences.”

By the time the clubhouse was dedicated, on November 29, 1890, the cost was set at about $650,000, including land, demolition and construction—nearly $17.5 million in 2015.   The Times commented on the remarkable novelties like the roof garden “to be used for ice skating in Winter, and tennis and garden proper in the warmer months”; the 100-foot long swimming “tank” that was kept at a constant 74 degrees; the 125-foot long rifle range and the 60-foot pistol range. 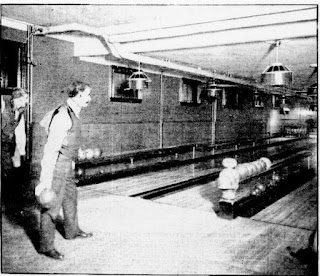 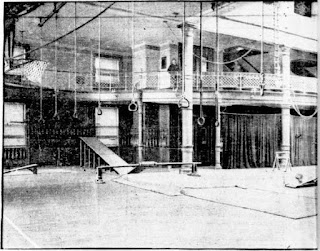 The newspaper commented on the “spacious parlor” which it found elegantly furnished and included a large oaken fireplace.  Here the ceiling was hand-painted to imitate a tapestry.  Around the sides, “in graceful attitudes are statues of men of muscle, representing the sprint-runner in the act of darting away at the crack of the pistol, the sturdy shot-thrower, the man of the weights, and the fencer—all suggesting the athletic prowess which has done much to spread the club’s fame over this country and England.”

The auditorium was capable of seating 1,500, the main dining room could accommodate 200.  The Times pointed out that some not-so-athletic men had joined the club “expressly to avail themselves of the privileges of the clubhouse, the cuisine having been by no means overlooked when the application to join the organization was made.”
The members enthusiastically used the new facilities; sending the kitchen staff to the brink of exhaustion.  On February 1, 1891 The New York Times reported “Members of the Manhattan Athletic Club enjoyed another love feast last night.  Ever since the club took possession of its new clubhouse…the members have been keeping up festivities in one way or another, scarcely a night passing without some entertaining being provided, and this last demonstration was the club’s annual dinner.  Covers were laid in the theatre for 450 persons.”

Even with the additional 1,462 members; the club had over-extended itself.  On June 17, 1893 the Real Estate Record and Guide announced that the clubhouse was “under foreclosure.”

The building was taken over by a similar club, the Knickerbocker Athletic Club.  The New-York Tribune reported on December 29, 1901 that the gymnasium was “often used by a hundred men each day, most of whom are businessmen, glad to escape from their offices to the relaxation and exercise afforded by the apparatus in the big and well lighted gymnasium of the club.”

The magnificent clubhouse would serve the Knickerbocker Athletic Club only a few years longer than it had been home to the Manhattan Athletic Club.  In 1902 the New-York Tribune announced that the club had “transferred its activities to Bayonne.”

Disposing of a massive clubhouse building like this one proved to be a monumental task.   It was sold in September to “Ballentine Brewery interests,” according to the Record and Guide; but the buyers apparently changed their minds and turned the property over in March 1903 for $500,000.  The buyer announced it would be altered “into a hotel.”  That plan, too, fell through when the big building was sold June 1903.

The gigantic building sat vacant for almost two years, when it was sold to John D. Crimmins and the Century Realty Company in January 1905.  They paid the same amount as the previous buyer.

Crimmins and the realty firm were acting as agents for the actual buyer—Tiffany Studios.  Louis C. Tiffany’s burgeoning business prompted his move to the large building from his studio on Fourth Avenue.  He personally designed and oversaw the renovations, which went beyond the interior layout.  In updating the Romanesque Revival he ordered the removal of the stone balcony that spanned the three centered openings of the second floor.  It ended in disaster.

At around 4:30 on the afternoon of August 28, 1905 workmen were busy at work on the project.  Suddenly the heavy balcony crashed, “burying under several steel beams and the debris of brick and mortar eight or ten workmen, six of whom were more or less injured,” reported The Times.

The newspaper’s description of “more or less injured” was somewhat understated.  Thomas Callahan’s back was broken and he died a two and a half hours later.  Anthony Winkler not only suffered two broken legs, but doctors advised “he may not recover.”

By the end of October Tiffany had completed renovations.   The New York Times said of the building, “For a series of years it lay vacant, a big brownstone elephant on the hands of its owners.”  The newspaper explained “Mr. Louis C. Tiffany, who is the founder and moving spirit of the Tiffany Studios, has turned the main floor of the club, where the restaurant was, into a big apartment given up to the old furniture, curios, and bric-a-brac which were added to the other departments when Schmitt Brothers joined the firm.”

The theater and dining room were now the stained glass department.  “Stained-glass windows may be seen about the mezzanine or gallery floor of the old theatre.  Objects in Favrile glass, in enamel, and in the deep-toned pottery of the sort original with Tiffany are shown on tables in the rooms off the main gallery.”  The gymnasium had been made over for the textile department—rugs, screens, hangings, for instance.

Louis C. Tiffany’s personal tastes trumped some of the now-dated designs of P. J. Lauritzen.  The newspaper reported “Apparently, the architectural details of the south door are not to Mr. Tiffany’s liking, for he is having the round marble pillars shut out by piers of polished granite.  The elevator has been condemned as in bad taste, and its elaborate decorations ruthlessly hidden with cloths.

Once it was established in the former clubhouse, Tiffany Studios continued creating some of the most beautiful and costly decorative articles in the world.  Bronze lamps, leaded glass shades, stained glass windows, desk accessories, rugs and other items were all designed and manufactured in the Madison Avenue building.

Cleverly, Tiffany used the building as a marketing and exhibition space as well.  When the seven windows for Robert Graves’ mausoleum were completed in 1910—a series of glass panels for the octagonal structure what presented a 360-degree landscape—they were put on exhibition here for ten days.  And the following year the extraordinary “glass curtain” for the National Theatre in Mexico City was displayed here was well.  That piece contained more than 2,500 square feet of glass mosaic and weighed 27 tons.  The curtain was designed to be raised and lowered by hydraulics. 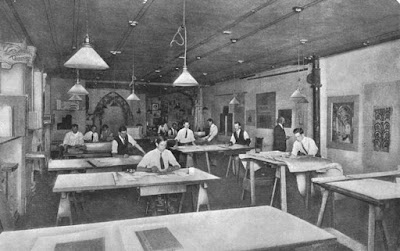 Perhaps Louis C. Tiffany had underestimated his future needs; but on September 20, 1911 it was announced that the building was being enlarged.  The Real Estate Record and Guide said “An eight story addition…will be tacked on and one or two stories added to the present building.”

Manhattan properties are very often the victims of the land value on which they sit.  On August 24, 1912 the Record and Guide pointed out that while Tiffany had paid half a million for the former clubhouse, the real estate was now valued at $1.25 million.  Whether it was the soaring land value, the need for more space by Tiffany Studios, or a combination of both; the chunky stone and brick building was sold in May 1916.  In reporting the sale the Record and Guide pointed out “The corner comprises one of the most valuable building sites in the Grand Central Terminal district.”

The building sat unused for another six years before being demolished, to be replaced by the massive Roosevelt Hotel, designed by George B. Post & Sons, which survives.