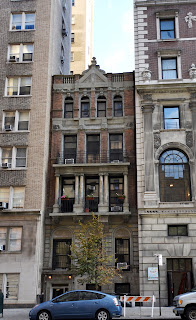 In the last decades of the 19th century T. E. D. Power set to work dividing former Livingston country estate, which he had inherited, into building lots.   By the end of the 1880s the frenetic development of the Upper West Side was well underway.  Partnering with architect John G. Prague, Power would change the face of at least one large section.

On December 20, 1890 the Real Estate Record and Builders’ Guide pointed out “It is no exaggeration to state that no two gentlemen have done more to add to the attractiveness of that part of the city, nor has any individual or combination of capitalists done more toward its improvement.  They have created a neighborhood, and in creating it have doubled and trebled the value of their own and their neighbors’ land.”

By the time of the article the pair had erected at least 232 residences in the neighborhood around 86th Street and Columbus Avenue, at an outlay of around $7 million.  John G. Prague acted as his own developer for some projects, as was the case with five rowhouses on West 86th Street between Columbus and Amsterdam Avenues completed in 1889, including No. 137.

Prague was able to crank out scores of designs in a very short time by simply changing the decorations on the same cake.  Working mostly in Renaissance Revival style splashed with other elements, he mixed and matched balconies, gables and ornamentation from his own stylebook; creating rows of harmonious homes which appeared individual.  However by walking a block away in any direction one could find a near match, if not a duplicate structure.

The four-story and basement house at No. 137 was a handsome blend of limestone and tan brick.  The rusticated stone parlor floor sat above a broad stoop.  Each succeeding floor was given a balcony, protected by decorative iron railings—the second floor being the most impressive with slender columns on substantial bases supporting the balcony above.  The grandeur of the second floor vied with the decorative froth of the uppermost level where the trendy Queen Anne style made its appearance.

Unfortunately for Prague, the house said vacant for two years after its completion.  In the meantime, the interest payments were accumulating on the $40,000 mortgage he had taken out on October 14, 1890.  A representative of the New York Life Insurance Company later told the court “Mr. Prague was building houses, and he wanted a loan. We would tell him if we made from time to time payments, we should charge six per cent until the completion of the buildings, and five per cent thereafter.”

On October 8, 1891 Prague finally sold No. 137 West 86th Street “subject to mortgage of $40,000.”  The wording landed Prague in court when John Campbell sued him for breach of contract.  Prague had failed to deliver the property “free and clear” other than the mortgage.  Having taken title, Campbell found out about the hefty interest that had accumulated.  The case would drag on into 1896.

In the meantime, Cord Meyer, Jr. was living in Maspeth, Long Island.  The son of millionaire sugar refiner and partner in Dick & Meyer, he was also prominent in Queens politics and the former Secretary of the Democratic State Committee.    At around the turn of the century Cord Meyer took possession of the 86th Street house; but he never really called it home.  Newspaper articles routinely listed his Maspeth mansion as his main residence; although his sons, Charles, George and J. Edward, seem to have preferred to use the Manhattan address.

Meyer, who had inherited approximately $7 million at the time of his father’s death, appeared in the social columns nearly as often as on the political pages.  On May 18, 1900 The New York Times reported on the maiden voyage of his new 45-foot yacht, the Altair, called by the newspaper “the first of the new class of yachts.”

1902 was an important year for Cord Meyer.  Not only was he a guest of President Theodore Roosevelt at a luncheon at Sagamore Hill on July 11; he purchased a new summer home, The Cove, in Great Neck, and his son Charles Garrison Meyer was married to Sarah Willetts Leavitt at the bride’s country residence on Long Island.

It was also the year that he was stopped on the Jericho Turnpike.  “It is alleged that his machine was making better time than the law allows,” said The Times on November 23, 1902. “Mr. Meyer denies that his automobile was exceeding the speed limit,” it added.

When his case came before the courts on December 20, Meyer’s chauffeur, Paul Verget, was found guilty of “having speeded his auto an eighth of a mile in sixteen seconds” and Meyer was fined $30.  Unaccustomed to being on the opposite side of the law, the politically-involved Meyer appealed.

On February 22, 1903 Verget was found guilty again and Meyer paid the increased fine of $50 “under protest.”  He refused to give up, however, and appealed again.  This time, on July 18, 1903, his guilty verdict was reversed on a technicality.  “The Judge based his decision on the ground that the prosecution should prove that the road where the alleged offense was committed was a public highway, which it failed to do,” explained The New York Times.

But Cord Meyer had not heard the last of speeding violations.  He replaced his chauffeur with 23-year old Morris Frielander who arrived in New York from England at the beginning of March 1904.  Three weeks after being employed by Meyer, Frielander was arrested for speeding on Third Avenue and 121st Street.   His defense was “that he had not been here long enough to understand the automobile speed laws.”

On September 19, 1910, when The Times announced the engagement of Helen Van Nostrand to George C. Meyer, it noted that “Cord Meyer, former Chairman of the State Democratic Committee…has been seriously ill at his country home, The Cove.”

At the time of Cord Meyer’s death a month later, on October 14, the 57-year old had not only made a tremendous mark on state politics, he was also responsible, with his sons, for the creation and development of the Queens, New York, communities of Elmhurst and Forest Hills.

Meyers’ sons, George and J. Edward, shared the 86th Street house for about a year, before leasing it to Sigmund Wechsler.  Living with him was his sister, Cornelia V Wechsler, whose engagement to Harry Greenburg was announced on May 17, 1914.

In April 1919 the Meyer brothers leased the house to Clara Frank “for five years.”   Clara rented rooms to upscale tenants.  One of these was Clarence Adler, who called himself a “Pianist, Pedagogue.”  Adler established his piano studio here in 1919 and remained in the house until 1922.

Another tenant was William S. Brady, “teacher of music,” who announced on January 9, 1920 that he had established his new studio in the house.  Among his successes he counted former pupils Carolina Lazzari, contralto with the Chicago Grand Opera Association; Dorothy Jardon, soprano with the same group; Grace Wagner, soprano of the Society of American Singers; and soprano Anne Roselle of the Scotti Grand Opera Company.

The well-respected voice instructor boarded the S. S. Majestic on July 29, 1922 with “a party of his pupils,” according to The Musical Courier magazine.   “The party will first stop at Paris, proceeding then to Munich where several of the members of Mr. Brady’s class are awaiting him.”

The magazine promised that when Brady returned at the end of September, “he will reopen his New York studio at 137 Wet Eighty-sixth Street;” this despite the fact that just a week before he sailed the Meyers brothers had sold the house to Jago Realty & Construction Corp.  The Real Estate Record noted “The new buyers will remodel the structure into small suites.”  Among the changes made that year by architects B. H. & C. N. Whinston was the removal of the stoop and the parlor floor balcony.

True to his word, Brady continued his voice studio under the new owners.  On August 16, 1927 his studio was the scene of the operatic wedding of Leone Kruse, soprano of the Chicago Civic Opera Company to Lawrence Wolfe, a tenor.  The newlyweds' honeymoon would be a short one.  The New York Times noted "Mr. and Mrs. Wolfe will live at the Belleclaire until the opening of the opera season, when Mrs. Wolfe will go to Chicago to make her American debut, and Mr. Wolfe will go to Germany to sing.

Brady was still teaching here, after two decades, when another tenant, Mrs. Sylvia Bellin, left her apartment on January 5, 1940.  The 40-year old went to the Mayflower Hotel at No. 15 Central Park West on the pretense of seeing an apartment.   When she was left alone, she jumped to her death to the courtyard at around 4:20 p.m.  A note was found in that apartment asking that her sister be notified. 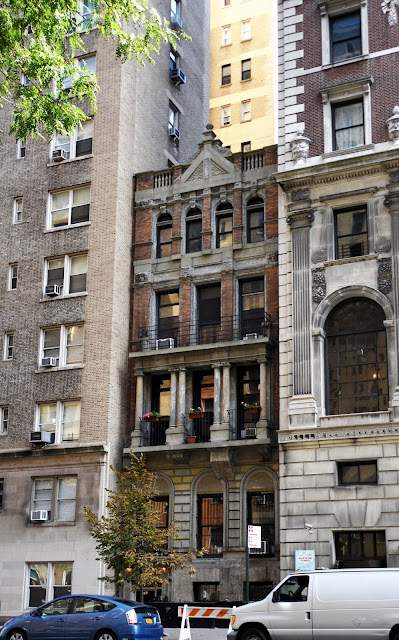 In 1948 the Meyer house was converted to three apartments per floor.   Now squashed in between two tall buildings, the once-gracious town home has been sadly maltreated.  And yet John G. Prague’s design manages to still shine through; a reminder of much different times on West 86th Street.