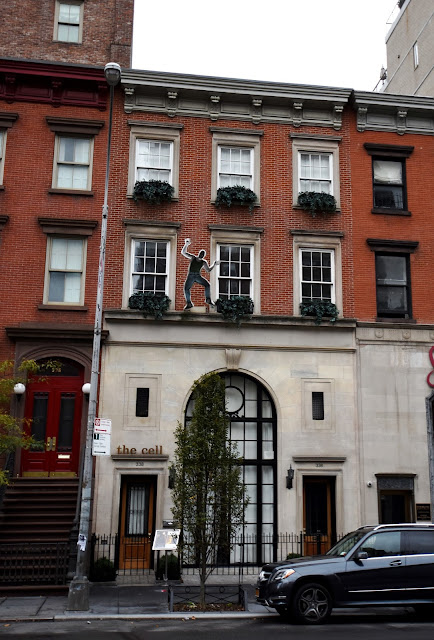 The brick-faced Italianate houses that lined the south side of West 23rd Street between Eighth and Ninth Avenues at the time of the Civil War were not mansions.  Yet the 25-foot wide homes were far from middle-class.  The speculative row was designed with the financially-secure professional class in mind.

The house at No. 338 was home to the John S. Boyd family.  Like its neighbors, it was three stories tall above a high basement.  A broad brownstone stoop rose to the parlor floor where, most likely, floor-to-ceiling windows opened onto a cast iron balcony, like its neighbor at No. 336.  Boyd’s house went one step further than its neighbors in the treatment of the upper floor openings.  Rather than the brownstone lintels and sills, No. 338 featured carved limestone enframements.

Boyd was a director in several insurance firms, including the Clinton Fire Insurance Company and the First National Eclectic Life Assurance Society of the United States.  But most importantly he was President of the Albany Brewing Company, which was founded by his grandfather in Albany decades earlier.

Boyd’s extensive brewery was in Albany; but not extremely far away from the 23rd Street house, on West Street and West Houston Street, was the firm’s New York office and “depot.”  From here shipments of beer were loaded onto train cars or boats on the North River (later renamed the Hudson River).

The scope of Boyd’s business was evidenced in 1878 when he filed an application to lay railroad tracks between Morton and Leroy Streets to the river.

The Boyds had moved on by the last decade of the 19th century.  The new owners decided by 1893 to rent rooms.  On May 29 that year an advertisement appeared in The Evening World:  “English family can accommodate one or two boarders: nice home; good board.”

The house would see the comings and goings of various tenants over the next few decades.  Civil engineer George Mitchell Estabrooke lived here at least from 1904 through 1908.  And by 1913 a “Miss Flynn” was here.   A caring aunt, her 7-year old nephew Donald Daly suffered from tuberculosis in the knee.

That same year Dr. Frederick Franz Friedmann arrived in town and set up an office at No. 339 Fifth Avenue.  The Berlin physician widely touted his cure for tuberculosis.  The Sun reported on March 1 that “He said with every evidence of sincerity that consumptives barely able to drag themselves to the office would come again inside of two weeks, walking erect and with signs that the cure has taken effect.”

The day after Freidmann’s office opened, at least 1,000 afflicted persons lined up along Fifth Avenue seeking treatment.   The publicity had attracted the notice of Miss Flynn.

Little Donald was admitted to Mount Sinai Hospital where Dr. Friedmann started treatments.  In the meantime, the doctor accepted $125,000 “part payment” from Moritz Eisner for the American rights to the remedy.  The U.S. Government’s doctors were more skeptical.

The National Association for the Study and Prevention of Tuberculosis commenced a study; and in May 1913 Washington DC Doctor Anderson published an official report that dismissed Friedmann’s “cure” as ineffective.

On May 10, 1913, the day after Dr. Friedmann was found in Canada, having mysteriously disappeared, The Sun reported that Miss Flynn had removed her nephew from the hospital.  She said she “believed that the child had made no progress and that it was useless for him to remain there further.”

Also in the house at the time was Susan Campbell.  On St. Patrick’s Day 1914 she married Harry C. Swift who managed the B. F. Keith’s Harlem Opera House.  The boarding house that Susan Campbell and Miss Flynn enjoyed would soon see significant change.

No. 338 was owned by James D. Powell.  He lived on Livingston Place (later renamed Nathan D. Perlman Place) with his wife and son.   His death on August 17, 1916 would change the course of the 23rd Street house.   On February 18, 1919 it was sold at public auction “to close the estate.”  It was purchased by the Lawyers Title & Trust Co., which quickly resold it to the New York Savings Bank that same year.

Originally incorporated as the Rose Hill Savings Bank in 1854, the institution was well-known in the Chelsea area; its main bank building being an imposing Greek temple-like structure on the northwest corner of 14th Street and Eighth Avenue.

In 1921 the bank began the process of renovating the old high-stoop house to a modern bank.  The basement and first floor were transformed into a single, soaring space accessed through bronze doors within a two-story arched opening.  At the right side a doorway provided access to the apartments upstairs.  It was echoed in the window on the opposite side and both mimicked the treatment of the upper floor openings.  While the residential character of the third and fourth floors—including the bracketed cornice—remained intact; the new stone front presented the clean, modern visage of a stable financial institution.

The upper floors were leased to residential tenants, including attorney Earl A. Smith of the law firm McElligott & Smith.  In 1922 he took the bench as a temporary magistrate, filling the place of Judge Matthew T. Breen who was ill.

When the bank was taken over by the Century Bank in 1928, it signaled a series of rapid-fire changes.  Later that year Century Bank merged with the Dewey State Bank, while retaining its old name.  By 1930 it was a branch of the Interstate Trust Company while, again, still maintaining the Century Bank name.

At around 9:00 on the night of April 18, 1930 a 12-year old boy, Harry Restel, was playing in front of the bank.   When he happened to brush by the door, it flew open.  The New York Times reported the following day, “Harry looked inside.  No one was there.  He saw a big safe.  The door of that was open too.  It was filled with silver.”

Reacting in a way that no doubt made his mother proud, Harry ran to Patrolman Michael Kent who was on duty nearby.  Kent notified bank officials who rushed to the scene.

Although the bulk of the bank’s assets were locked in the big vault, the safe contained a tempting $7,367.17 to Depression era thieves.  Nothing was missing.  The bankers said “The only way they could explain the bank door being open was that some employe working late in the bank had gone home and forgotten to lock it.”

One would surmise that someone had significant explaining to do the following morning.

In 1941 the former bank space was taken over by the Molloy Funeral Home; then by the Horne-Dannecker Funeral Home in 1957.  Eventually Horne-Dannecker moved north to the Bronx and the eclectic life of No. 338 continued as the PWG Gallery moved in by 1998.  It was followed by the John Stevenson Gallery which remained here until about 2006; replaced by the Cell Theater Company.  Still in the space today, The Cell is a not-for-profit collective, self-described as “creating works to mine the mind, pierce the heart, and awaken the soul.” 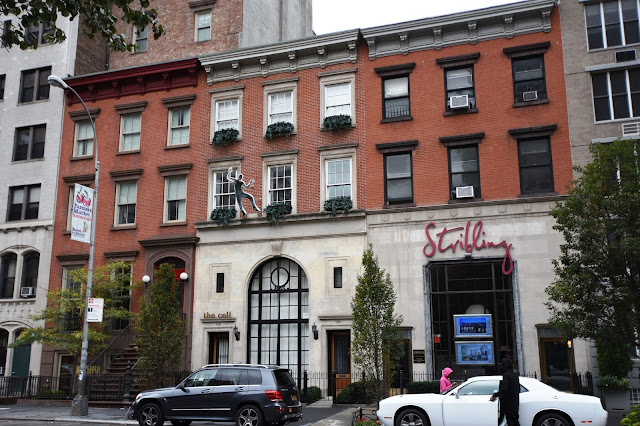 The house that was once home to a successful beer brewer is little changed since its 1921 transformation to a bank; at a time when this section of Chelsea was rapidly changing.