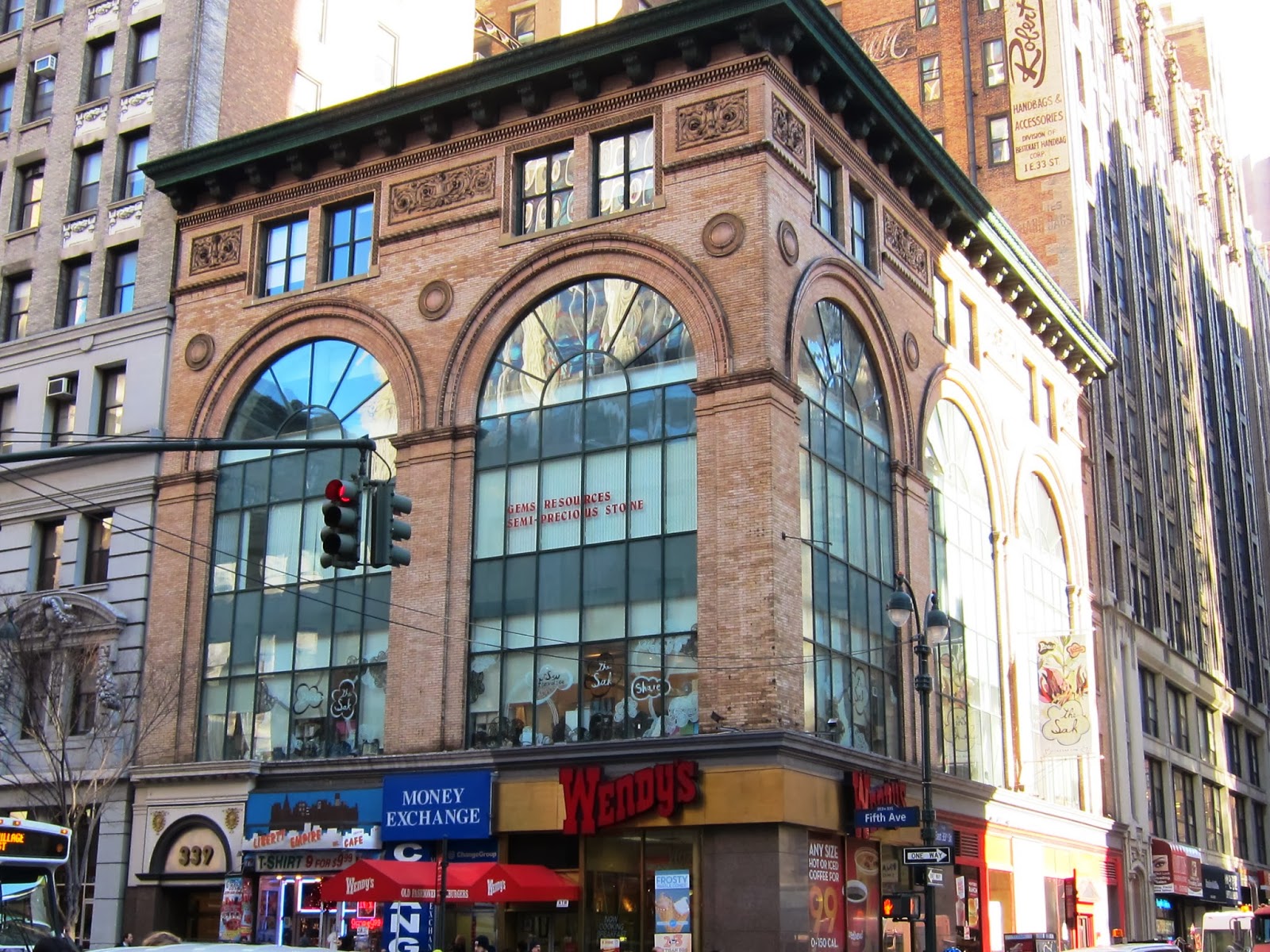 In 1894 the exclusive mansion neighborhood of Fifth Avenue and 33rd Street had been engulfed by commerce.  William Waldorf Astor’s brownstone mansion on that corner had already given way to the Waldorf Hotel and now his aunt Caroline was preparing to leave her residence next door.  In its place would rise the Astoria Hotel—the two feuding Astors would begrudgingly put income over family differences and join their two exclusive hotels with a hyphen.

Directly across the avenue the showrooms of the high-end carriage manufacturer A. T. Demarest & Co. replaced the three brownstones that had stood at Nos. 335 through 339.  The Demarest building had been completed four years earlier.  Designed by Renwick, Aspinwall & Russell, four stories of buff-colored iron-spot brick sat on a stone base.  Terra cotta medallions and panels accented the façade; but the grand three-story arched openings separated by shallow brick pilasters stole the show.  The architects flooded in the interior with light from the dramatic windows which managed not to overpower the dignified design.  Cast metal bays, two stories tall, nestled within the grand arches.

The Demarest Building could boast having the world’s first electric-operated elevator.  It was installed by the Otis Brothers firm as the structure neared completion in 1889.

As the turn of the century brought with it the motorcar, Aaron T. Demarest adapted.  In 1902, along with carriage building, his firm began making automobile bodies.  On July 13, 1908 Demarest died after having eaten tainted clams.  His partner, Gabriel C. Chevalier, recognized that the age of the carriage was quickly passing away and before the year was up decided to move the company to Automobile Row—the stretch of Broadway in the 50s that was quickly becoming home to firms related to the automobile industry.

The Demarest building on Fifth Avenue was converted to offices and loft space for small manufacturers.  In 1913 Dr. Frederick Franz Friedmann set up an office on the second floor to demonstrate his cure for tuberculosis.  The Sun reported on March 1 that “He said with every evidence of sincerity that consumptives barely able to drag themselves to the office would come again inside of two weeks, walking erect and with signs that the cure has taken effect.”

The leasing agent, however, stepped in and refused to allow the doctor to treat any one of the estimated 1,000 patients who lined up on Fifth Avenue.

Upstairs Teitelbaum & De Marinis operated for several years—at least from 1911 to 1914--producing what Millinery Trade Review called its “high-grade headwear.”  The company would be among the first of the apparel trade firms as the garment and millinery district inched northward from the Union Square area.

In 1917 the ground floor space was taken by the Harris Store; a high-end menswear retailer.  The store opened its doors on January 20 to “the discriminating men of New York.”  Its opening advertisement in The Evening World called the new space “handsomely appointed” and noted the prestigious location “opposite the Waldorf.”  A gentleman purchasing an overcoat that morning would expect to pay about $400 in today’s dollars.  The cost of a silk shirt would translate to about $145.

At the time the upper floors were filled with a variety of tenants; by now most of them related to the apparel and millinery fields.  In 1919 Flapper Coats, Inc. was here, along with Mrs. Sack’s Ready-to-Wear, E. V. Schoenfield, and P. Schira Co.; all of them apparel firms.  Allied Steel and Supply Company had its offices here at the same time.


By 1921 La Grecque Underwear Co. had moved in; as had Hirschberg & Company, another hat manufacturer.  But not all the tenants were apparel-related.  E. & J. Bass, Inc. established its showroom here at the same time.  The company made and sold housewares and in April 1921 The Pottery & Glass Salesman was especially taken with its “glass iced-tea or lemonade sets.”

“Although put out at quite a popular price, the items are decorated in an unusually rich fashion.  The tall tumblers are adorned with a cut treatment about a third of the distance down from the top.  Over this portion is applied a rich color band, while the tumblers are topped with silver-deposit work with attractive scroll design.”

What the publication found especially interesting were the accessories.  “Each tumbler is equipped with a ‘sucker spoon’ with a bowl to match the band in color.  These sucker spoons, as the name would indicate, are of hollow glass tubing, with a little aperture at the base where the handle connects with the bowl.”

At some point in the mid-to-late 20th century the ground floor was modernized—which is to say obliterated—and today a mish-mash of garish storefronts wrangle for attention.  Where “discriminating men” shopped for high-priced shirts and suits in 1917, tourists rifle through t-shirts or grab a franchise hamburger.

But the upper floors survive.  The metal bays were removed, replaced by flat panes; yet the architectural drama and integrity of Renwick, Aspinwall & Russell’s Renaissance Revival still command attention today.
Posted by Tom Miller at 2:40 AM