By the early 1920s the Murray Hill section of Madison Avenue had been taken over by commerce.  Where mansions stood, tall business buildings loomed.  Among the last holdouts was the four-story brick residence of Helen Hartley Jenkins, at No. 232 Madison Avenue, across the avenue from the still-standing J. P. Morgan and De Lamar mansions.

Helen was the only daughter of multi-millionaire Marcellus Hartley (who died in 1902 leaving an estate of approximately $11 million) and the widow of George Walker Jenkins. The Madison Avenue house was the scene of brilliant entertainments during the winter season.  Summers found Helen in either of her two sprawling estates in Norfolk, Connecticut or Morristown, New Jersey.

Eventually, however, Helen gave in.  On September 12, 1924 The New York Times reported "another of the old Murray Hill residences will make way for the advance on that section of business building construction.”  Real estate operator Arthur Greenbaum and Nathan Wilson, had leased the property stretching back through Nos. 15 and 17 East 37th Street from Helen Hartley Jenkins for $2 million.

The newspaper advised that “The lessees are to erect a fourteen-story store, office and showroom building to be completed by January, 1926.”

The Jenkins mansion was demolished and construction begun on a modern structure to house firms related to the silk industry which was rapidly centering itself in the neighborhood.  Greenbaum and Wilson had commissioned the architectural firm of Polhemus & Coffin to design their building.  Largely overlooked today, Henry M. Polhemus and Lewis Augustus Coffin, Jr. had been in partnership for five years.   They would not only design other impressive office buildings; but the summer estates of Mrs. Daniel Guggenheim and Lucy Drexel Dalgren.

Their design was a successful marriage of Gothic and Art Deco—two seemingly disparate architectural styles.   The two-story stone base featured vast show windows separated by faceted engaged columns with medieval capitals.  Each was connected to the other by robust stone voussoires which created the illusion of pointed Gothic arches.

Crouching figures groaned under the weight of the hefty Art Deco buttresses that broke through the second floor cornice.  Above, angled brick piers rose uninterrupted for eight floors, emphasizing the verticality of the skyscraper.   The cream colored brick was highlighted by darker brick in the spandrels; laid to further accentuate the upward design.  At the 15th floor setback the architects returned to the Gothic motif, adding quatrafoils that coexisted with beefy Art Deco angles. 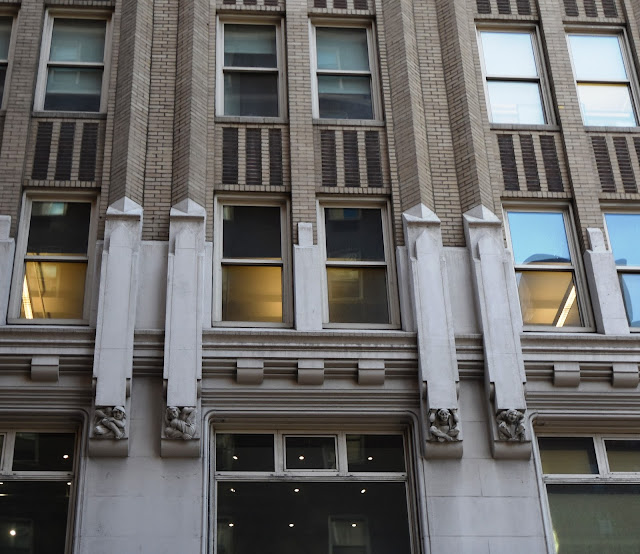 The building was not yet completed when silk firms lined up to lease space.  On August 1, 1925 Arthur Greebaum announced that Johnson-Cowdin-Emmerich, Inc., one of the country’s largest and oldest manufacturers of silk ribbons, had signed a lease for the four top floors.  The New York Times called it “added impetus to the uptown movement of silk manufacturers which has been in progress for many months past.”

The choice of the top floors turned a new page in the thinking of silk concerns.  The company’s president, General Disque, said “The move on the part of this company marks an epoch in the silk industry in having decided to lease space on the upper floors of a high building, inasmuch as the silk trade manufacturers and jobbers have always heretofore believed it necessary to be located in a ground floor store.”  Silk companies had come to the realization that the natural light available on high floors was “essential for the proper displaying of silks.”

The highly-visible ground floor space was taken by Hemmingway Silks; and among the other tenants in the upper floors were the Benrose Silk Manufacturing Co., the Tirrell Bros. Silk Corporation; and Weill & Callihan Silks.

Not all of the original tenants were in the silk industry, of course.  The National Democratic Club leased space for its “new clubhouse” before the building was completed.  Other diverse tenants included the Literary Commodies, Ltd., the offices of the French Opera Comique Company; and several architects including Arthur C. Holden and the structure’s designers, Polhemus & Coffin.  They would be joined here shortly by architects Pliny Rogers and G. G. Miller.

The ground floor location of the Hemmingway Silk Company was not only convenient for clients; but for shadier types as well.  In February 1926 a fireman walked into the office wearing his full uniform and a badge “No. 74” on his hat.   He asked Harry M. Archer if he would be willing to buy tickets to a benefit for firemen.   Archer, however, was not duped by the convincing costume and reported the impostor.

The incident prompted Fire Chief John Kenlon to issue a public warning.   He warned “To catch public sympathy, the fraudulent tickets contain a picture of the Fire Department’s ambulance.”

By the early years of the Great Depression the advertising and publishing industries were pushing the silk district out.  Edwin Alendelson Advertising was among the first to move into No. 232, leasing space in 1931.  It was followed by Farrar & Rinehart, publishers in 1933 which took the entire 14th floor.  United University Presses, Inc., which changed its name to University Books, Inc. in 1936, also took space about this time.

In 1937 the changing face of the neighborhood was evident in the list of tenants.  Gone were the silk firms; while apparel concerns like the Tyson Shirt Company and Ades Brothers, manufacturers of linens and lingerie moved in that year.  Other leasers that year were the Novelty Handkerchief Manufacturing Co., the Gage Publishing Co., and architect Magill Smith.  Meanwhile, the ground floor space had been renovated for Frank Rodriquez’s “luncheonette and store.”

Publishers and advertising agencies continued to be visible at No. 232; but it was a far different occupant that grabbed newspaper attention.  The war in Europe had created uneasy allies of the United States and the Soviet Union.  A common wartime goal was not enough to erase the underlying ideological differences between the two countries.   In response, the National Council of American-Soviet Friendship was formed as a successor to the National Council on Soviet Relations.  The organization took space in the Madison Avenue building for its headquarters.

The Council was perceptibly sympathetic to socialism and communism.  In June 1943 it opened the American-Soviet War Exhibit in Rockefeller Center.   The New York Times reported on June 25  “daily American food wastage of two-thirds of a pound of food a person contrasted with the Russian diet during the siege of Leningrad of four slices of black bread and one glass of water was demonstrated yesterday.”  Visitors to the exhibition were informed “In Russia, it is considered a crime to waste so much as a crumb.”

Two weeks later, the National Council of American-Soviet Friendship railed against criticism of the pro-Russian film Mission to Moscow.   Condemning any criticism as “a distinct disservice to the cause of American-Soviet unity during the war and afterward,” the group added “such criticism must have given great satisfaction to Hitler and his Axis colleagues.”

Intolerance of critics of the Soviet Union was again evident when, in 1945, the National Council issued a 32-page pamphlet “designed to refute criticisms of Russia” contained in W. L. White’s book Report on Russia. 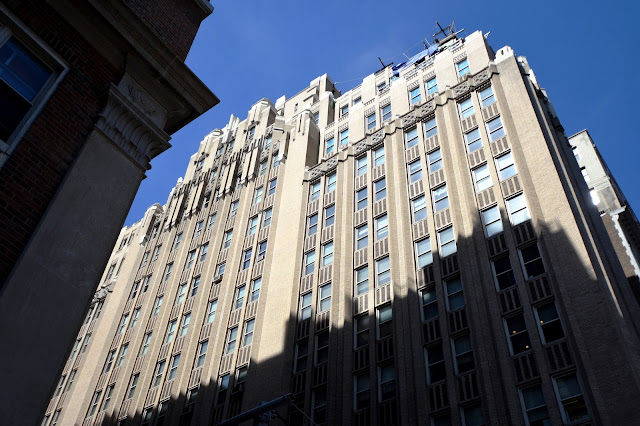 By now No. 232 was filled almost entirely by publishing and advertising offices.  In 1950 the ground floor, until recently a luncheonette, was leased by the First Church of Christ, Scientists “for a reading room.”

Among the publishers here in 1971 was Herder and Herder, described by Henry Raymont of The New York Times as “long noted for prestigious, high-quality books on Roman Catholic theology and philosophy.”  But in May that year the Catholic Church and the publisher would go head-to-head.

Executive vice president Werner N. Linz explained the changing tenor of the company’s philosophy on May 26.  “Our concept of publishing is to be a pioneering house in an area where radical change is overdue.”  And the firm’s first step in that direction was the publication of The Sex Book, described as “a highly controversial encyclopedia for young people with candid explanations and photographs of sexual behavior.”

Translated and edited from a West German sex-education book, it “has aroused the curiosity and concern of Federal and ecclesiastical authorities,” said The Times.  Nevertheless, although the manuscript and photographs were seized by Customs when they arrived in the U.S., Linz stressed “the Justice Department quickly ordered them released, apparently agreeing with us that the text and illustrations conform to the guidelines of the report of the Presidential Commission on Obscenity and Pornography.”

The Justice Department’s decision was not enough to satisfy either the Roman Catholic Church or the Federal Bureau of Investigation.  A few days before Linz’s announcement, an FBI agent visited the publisher’s office to buy an advance copy.  The same week Terence Cardinal Cooke arrived at No. 232 Madison Avenue for the same purpose.

The German-born publisher insisted that his firm would continue to produce religious texts such as the six-volume Sacramentum Mundia; “but it seems to us that the social sciences, with their concern for man and his relationship to the world, are the next logical area for religion to align itself.”  Cardinal Cooke was most likely not inclined to agree.

Despite interior modernization little has changed to the face of Polhemus & Coffin’s handsome Deco-Gothic blend.  Even the ground floor—normally the first element to be lost to remodeling—is intact.  It represents physical testimony to the transitional period of Madison Avenue from a high-end residential neighborhood to one of bustling commercial interests.