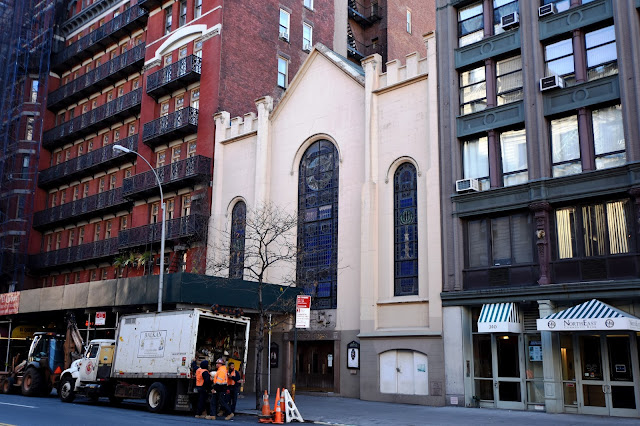 In 1833 the Chelsea neighborhood, only a few years earlier verdant farmland and grassland, was seeing rapid development.  Much of the area had been the summer estate of the Clement Clarke Moore family from which the neighborhood would take its name.  The Fitz-roy Road (soon to be renamed Eighth Avenue) was only partially graded and paved; and The New York Times would later remark “At that time that portion of Manhattan Island was nothing more than a suburb of the City.”

A mission church, the West Twenty-Third Street Presbyterian Church was completed on December 19, 1833 for the “needs of the hitherto neglected district,” as explained by The Times.  The congregation would replace the little wooden structure twice, the last being built in 1854 on 23rd Street near Seventh Avenue.

In 1859 Sloane and his trustees purchased land at No. 238 West 23rd St. and began construction of what The New York Times described as “a small but comfortable edifice of brown-stone.”  The new building was 25-feet wide, the width of an ample residential lot, and stretched 100 feet to the rear.

Ecclesiastical architecture had changed greatly from the 1830s when the first West Twenty-Third Street Presbyterian Church was built and churches mimicked Greek Temples with triangular pediments over columned porticos.  The new Third Reformed Presbyterian church, costing $30,000 reflected the most current style.  It was generally Romanesque; but was heavily influenced by the relatively recent Gothic Revival style in its crenelated roofline and stubby spires.

The church was dedicated on February 5, 1860 with three services throughout the day.  The morning service was conducted by pastor Rev. J. R. W. Sloane who rarely held back on his strong stands.  Among his most fervent issues at the time was, understandably, slavery and what seemed to be inevitable war.

In demanding the abolition of slavery he said “It is not, be it remembered, upon the abuses of slavery that we insist: there are no abuses of slavery, as there are none of murder, none of adultery” and “That slavery is a sin,--a sin of no ordinary character, but one of enormous magnitude--I cannot wait to prove.”

Unlike some other clerics who denounced war and its necessary violence and loss of life; Rev. Sloane saw the Civil War as God’s tool for man to stamp out slavery and oppression.  Five months after the firing on Fort Sumter he supported the war in his sermon of September 26, 1861.

“Let the notes of the brazen trumpet of war, which calls the armed hosts to the conflict of death, be mingled with those of the trumpet of jubilee, proclaiming deliverance throughout all the land to all the inhabitants…God in his providence had put it in our power to do this great act of justice.  Whatever doubts had existed as to the constitutional concessions of Slavery, none could doubt that it was now perfectly constitutional under the war power to abolish Slavery as the best, perhaps the only means, of preserving the nation.”

A few years later, on April 20, 1865, Sloane would take to the pulpit to speak to his flock regarding the horrifying assassination of President Abraham Lincoln.  He eulogized the murdered president saying in part, “In the discharge of his great office, he had borne himself prudently, with such a burden as no other President had ever borne; he walked without faltering and without hesitation, deciding questions the most difficult, giving gracious audience to the highest ad the lowest, holding firmly the helm of affairs amid the stormiest seas, and conducting all to a successful issue.”

Rev. Sloane’s anger with slavery and those who supported it was evident.  “Mr. Lincoln was the victim of slavery.  He has fallen as much by the hand of this iniquity as any soldier of the republic who sleeps his last sleep in his gory bed upon the field of battle.  Booth was the result of pro-slavery influence.  This was the madness that fired him to the atrocious deed, the frenzy that hounded him on to the perpetration of the terrible crime.  Slavery is barbarism.”

Sloane’s firm stances from the pulpit were, perhaps, a bit surprising to some Victorian worshipers.  In a sermon entitled “Theories of Evolution,” he said “We do not propose to place ourselves in antagonism to science…on the contrary, we rejoice in all that modern science has accomplished.”  He quoted Darwin in the sermon and insisted that evolution did not contradict “the interposition of Diety.”

It can hardly be deemed a coincidence that on the same night in February 1878 both Presbyterian churches on West 23rd Street were burned.  On February 17 The Times reported that the interior of the Third Reformed Presbyterian Church were gutted “but its walls are still standing.”  There was a discrepancy at the time as to whether the structure was insured.

The newspaper reported “it was stated by one of the members of its congregation that it was insured for $20,000.  Several of the insurance men said, however, that the building was not insured as Scotch Presbyterians dislike insuring.”

Two days later the church’s pastor, Rev. David Gregg, visited the ruins which were “sufficiently cool in spots to enable the workmen to dig for the safes.”  Somewhat surprisingly, he found a miraculously-surviving item.

The New York Times reported that as he sifted through the still-smoldering ashes, he “was rewarded by securing the church Bible.  Its covers were burned off, and the edges of the pages were charred, but the printed pages were intact.”   In the cellar, where the Sunday School rooms were, the pews were intact and a cupboard holding the dishes “used by the ladies at ‘strawberry festivals’” was undamaged.

Donations were received to rebuild the interior of the church.  Architect John Correja was commissioned to design the $12,000 of reconstruction.

While Rev. Gregg did not have the personality and oratory skills of Rev. Sloane, he did carry on the tradition of reform and outreach.  On May 24, 1880 he made the church available for the sixth anniversary meeting of the Christian Women’s Temperance Union.  During that meeting it was determined “to establish the Christian Refuge for Intemperate Women, and $6,000 was needed for that purpose,” according to the New-York Tribune the following day.  Temperance had become one of the foremost issues in churches, and it was a topic that would be repeatedly addressed from the pulpit here.

On January 18, 1887 Rev. Gregg tendered his resignation following his acceptance of another position.  By 1895 his place had been taken by the Rev. F. M. Foster—a man whose convictions and rhetoric could easily be compared with Rev. Sloane's.

On Sunday, October 27, 1895, for instance, his sermon demanded that “Christians must not vote.”  In it he said in part “The political situation in this city is so corrupt that there is absolutely no hope of purifying it by the ballot box.  Of the three parties worthy of notice not one of them has sufficient fear of God to stand for the fourth commandment.  This witnesses to moral stagnation and death.”

He went on to say that “If the Government will not own that it is under the law of God, and parties put up that law as the price of votes, it is time for the Christian to step aside lest the vengeance of an offended Judge engulf him also.”

Journalists would question Foster for years about his staunch stand against voting.  But the opinionated preacher had much more to talk about than politics.

In the last quarter of the 19th century West 23rd Street had been the center of Manhattan’s theater and entertainment district.  It was a simmering issue for Rev. Foster.   Two days before Christmas, 1900, he railed against theaters from the pulpit.

“In all the years, vice was never so bold, brazen, devilish!  It stalks the street in open day and at night the theatrical district—Broadway, Twenty-third Street, Eighth Avenue, and Forty-second Street—is fairly ablaze with abominations.”  He railed on “A city which hands out saloon licenses will be morally corrupt.  A city which licenses theatres will reap the vices which those institutions foster.”  He called the theater “the school of abominations.”

As a new form of entertainment came along—the motion picture—Foster was there to make sure they were closed down on Sundays.  He headed the Interdenominational Committee of the Clergy and applauded Mary McClellan who, he said on December 27, 1908 was “making heroic efforts to suppress the evils of the moving picture shows seven days in the week and to close them altogether on the Sabbath Day.”

The outspoken clergyman turned his attention to the sin of bachelorhood just a week later.  He told Ethel Lloyd Patterson of The Evening World on January 4, 1909 “Bachelors die young, and it’s a good thing they do.”

His stance was based on the fact that men, of course, were meant to marry and procreate.  So what good was a bachelor?  He told the writer “A bachelor crumbles to pieces like an unused building, of no use to anyone, and a disfigurement to the landscape.  It is an eminently selfish and worthless existence that promotes wrong living.  What has a man to live for if, at the age of fifty, he has not married and made a home for some woman and for himself?”

Rev. Foster’s contempt was egalitarian and in his sermon of January 20 1912 he turned his attention to the Catholic Church.  The title of his sermon was “The Church of Rome:  Idolatrous; Imperial in Display.”

The good pastor’s adherence to the Christian tenets of forgiveness did not extend to Donald McLean, the treasurer of the Board of Trustees, who made off with $14,000 of the church’s funds in 1913.   The New York Times described him as “a well-known lawyer.  His wife was formerly President General of the Daughters of the American Revolution.”

When it was discovered that the money was missing, McLean went into hiding.  On the evening of March 24, 1913 servants told reporters “that he was away, and it was not known at what time he would return.”

His whereabouts were finally discovered in April 1914 when The New York Times reported “Mr. McLean is now recuperating from a prolonged illness, according to his wife, in Mrs. McLean’s home in Maryland.”  The out-of-state summer home made it difficult for authorities to get their hands on him.

But Rev. Foster was resolute.  He kept up the pressure on officials until finally, in June 1916, the Frederick, Maryland District Attorney’s office agreed to McLean’s extradition.

In March 1920 the congregation sold its building to Congregation Emunath Israel for $75,000—about $885,000 in 2015.  The New York Times reported that the church would remain in the structure until May 1, after which it “is to be converted into a synagogue.”  The Real Estate Record and Builders’ Guide pointed out “This is the first transaction involving this property in sixty years.”
The congregation, which had been founded in 1865, made only minor changes; most notably the replacement stained glass windows executed by Isabel Hawxhurst Hall, one of the few female stained glass artists at the time; and later the robust carvings over the entrance doors and granite cladding of the base.

Nearly a century later an ill-advised coat of paint covers the brownstone and the little spires have disappeared from the parapet.   This, along with the altered entrance and the loss of some carved elements, disguise the age and architectural integrity of the structure.  Nevertheless, the building now known as “The Chelsea Shul” has a long and venerable history.

non-credited photographs by the author
Posted by Tom Miller at 3:25 AM