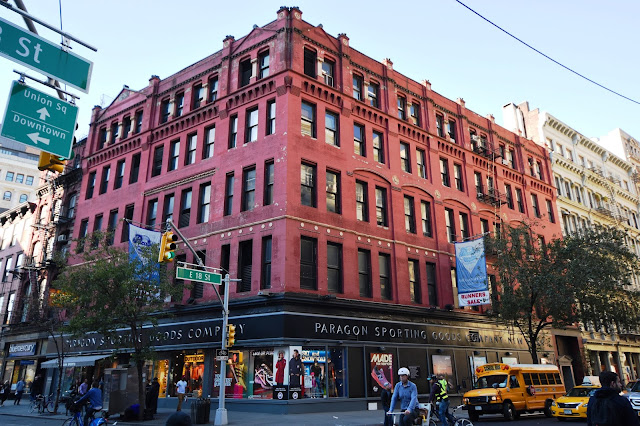 Oliver Ditson took a job in a Boston bookstore in 1826 and began learning the printing trade.  But his passion was music.  A church organist and composer, he published his first song in 1835.  A year later he went into partnership with bookseller Samuel H. Parker to create Parker & Ditson; a combination sheet music and piano store.

In 1845 Ditson bought out Parker’s share and by the end of the Civil War Oliver Ditson & Company had branch offices in Cincinnati, Philadelphia and New York.  Son Charles took over the New York concern, named Chas. H. Ditson & Co.

In 1881 the firm took a bold step.   Musical instrument sellers were still centered below Union Square along Broadway.  But on October 22, 1881 the Real Estate Record & Builders’ Guide reported that Charles H. Ditson and Oliver Ditson & Co. had leased the several properties forming the southwest corner of Broadway and 18th Street, north of the Square.

Six months later, on March 25 1882, The Guide reported on the progress.  The architect had been chosen, his designs approved, and, even before the old buildings were razed, leases were being signed.  “Messrs. Oliver Ditson & Co. of Boston, propose to erect a handsome five-story brick store building on the southwest corner of Broadway an Eighteenth Street…The architect is Mr. Pope, of Boston, who has drawn a very imposing design, with the main entrance in the centre of the building on Broadway, and with a side entrance on Eighteenth street.”

“Mr. Pope” was George Washington Pope.  The 60-year old was best known as a builder, having gone into the profession rather late in life, although his substantial commissions included highly visible structures like the Boston Museum.

The Guide expected work to begin immediately and that construction would be completed by October 1 that same year – a blistering schedule of just six months.  The project was estimated to cost about $150,000.

Apparently no one was happier to see the eyesores on Broadway demolished that the editors of The New York Times.  On April 15, 1882 the newspaper wrote “The old, low, and unsightly frame structures at the south-west corner of Broadway and Eighteenth-street, have been torn away, and workmen are digging a cellar.”  The Times welcomed the proposed building, saying “the plans show that it will be one of the handsomest structures in that part of the City.”

The six-month completion projected by the Record & Guide proved to be optimistic at best.  On May 27, 1882 Ditson & Co. signed a lease for half of the first floor retail space with Herter Brothers, one of New York’s most prestigious furniture makers and interior decorators.   But  in November, with the building still under construction, Herter Brothers cancelled their $17,000 a year lease and signed another for the northwest corner of Fifth Avenue and 20th Street.

Two years after Herter Brothers had agreed to the store space, the building was still not completed.  On May 9, 1884 George A. Castor & Co. rented the space with the stipulation “lease begins when building is completed.”

The five-story brick building was, of course, soon finished.  Pope had produced a Romanesque Revival structure trimmed in contrasting stone and highlighted by terra cotta elements.  The expected arched openings of a Romanesque Revival building were merely suggested at No. 867 Broadway by the brick arches that joined each of the two-story piers on the 18th Street side.  A hefty brick-corbelled cornice above the fourth floor provided a medieval touch; and interest was achieved through triangular gables along the roofline.

Along with Ditson’s and Castor & Co. on the ground floor, the upper stories were leased to a variety of tenants.  Cowlinshaw Nicol & Co., upholsterers, was here; and by 1893 G. L. Kelly & Co., “agents for the Contrexeville Manufacturing Company;” Arnold & Elias, milliners; and Keys and Lockwood, men’s neckwear makers, were in the building.

Also in one of the retail spaces in 1893 was silversmiths Whiting Manufacturing Company.  That year the firm had created a massive silver service to be presented to the cruiser New York by the citizens of New York City.  It was on exhibit in the store that summer.

A somewhat surprising tenant took up most of the top floor.  The Eighteenth Street Central Telephone Office contained the switchboards and equipment that provided telephone service to subscribers from 14th Street to 28th; and from the East River to the Hudson.   When the workers in the floors below left for home each day, the girls operating the switchboards stayed on; their overlapping shifts providing service for those up-to-date enough to have a telephone.

And so at around 6:40 on the evening of July 20, 1893, the building was deserted except for the six telephone operators on the top floor and Night Manager A. H. Crowther.  The following day The Sun reported that “one of the girls saw smoke curling upward past the open window at the back of the room.  She screamed, and the other girls dropped their receivers and screamed too.”

Crowther leaned out the window and saw that the smoke was coming from the Ditson & Co. store on the first floor.  “The girls grabbed their hats and ran down the Eighteenth street stairway,” said the newspaper.

The hysterical women negated the need for anyone to pull a fire alarm.  “The day watch of Engine 14, on Eighteenth street, a few doors away from the building, was aroused by the outcry the girls made in the street, and the men were out in a jiffy on a still alarm.”

By the time the fire fighters arrived, the fire had blazed up the stairway to the top floor.  Chief Bonner called in a second alarm and firefighters were dispatched to save Whiting’s commemorative silver service “and this was put away in safes.”

As the fire spread through the telephone offices, a heavy crowd gathered on the street below.  The onlookers were quickly sent back when “a wire with its insulation burning and sputtering came sailing into Eighteenth street.  Soon another wire came writhing through the air and the crowd backed still further.”  Another sputtering live wire would soon follow.

For some inexplicable reason, The Sun felt it necessary to comment on the Fire Commissioners outfit.  “Fire Commissioner John Scannell, in a new light suit and light hat, appeared at the third alarm, and donning a rubber coat, accompanied Chief Bonner to the telephone office.”  Telephone officials had begged the men to save the switchboard equipment.

The fire fighters were able to salvage the equipment; but obviously the sputtering, crackling lines that danced on the sidewalk below meant that service was at least temporarily down.  The Sun reported that 2,000 subscribers were “dependent on it for communication [and] used various languages in trying to rouse ‘Central,” but had to give it up.”

The fire was put out within an hour; but Ditson & Co. suffered heavy water damage to their first and second floor store.  The telephone office “was so badly wrecked that the manager decided to close it for the night.”  Total damages were estimated to be around $50,000.

A few months later Ditson & Co. posted an advertisement in The Sun for its “Fire Sale of Popular Music Books.”  The firm promised “These books are not perfect copies, having been very slightly damaged by the fire in our store last July, but we offer them at one-half usual prices.”  The books were offered at prices ranging from 15 cents to $1.00.

A number of musical instructors were in the Ditson Building in 1895.  Among them were accompanist instructors Louis R. Dressler and Francis J. Gilder; zither instructors F. W. Isenbarth and George Lechler; and voice coach H. P. Hanks.

A major tenant was Klauber Brothers & Co., which also had a Swiss office and factory.  The firm imported and manufactured embroideries, laces and neckwear novelties and was in the building by 1895.

Along with musical instruments, sheet music and music books, patrons could conveniently purchase concert tickets to any number of venues at Ditson’s.  And in 1905 the firm added another item to its offerings:  the Empress Music Box.   An advertisement on December 8 that year called the Empress “the most remarkable and expressive music box manufactured at the present time.

It would not be long before Ditson was selling its instruments and music elsewhere, however.  On September 15, 1906 the firm announced its plans to build a new headquarters on East 34th Street near the Waldorf-Astoria Hotel.

A month later, on October 13, The New York Times reported that John Forsythe had taken over the Ditson lease on the Broadway building.   John Forsythe was a large men’s haberdashery which offered a full line of menswear and accessories; as well as the manufacturer of women’s shirtwaists.  It had been in the building for several years by now.

Klauber Brothers & Co. was still here in 1912 when business was such that the firm expanded into the building next door at No. 865.  On October 4 it leased the four upper lofts, a substantial 20,000 square feet.

It was about this time that young Dorothy Barnholtz was being reared in an atmosphere of privilege.  Her father was a wealthy leather importer.   But Dorothy’s fortunes reversed when her father lost his entire fortune just prior to his death.  She was forced to go into the world and find employment.

She was hired by Klaubert Brothers and worked at No. 867 Broadway as an assistant cashier and bookkeeper.  Dorothy was very good at her job and it appears that she sorely missed her former lifestyle.  Things were going well between Dorothy Barnholtz and her employer until she left for vacation in July 1916.  With Dorothy out of the office, someone else took a look at the books.

The Sun reported on July 25 that she had been arrested a day earlier, charged “with the larceny of $5,000.  It is said this sum represented a number of small thefts, spreading over a considerable period, and that Miss Barnholtz was able to keep them up by juggling the books.”  Dorothy's pilfering would amount to more than $110,000 in 2015.

Klauber Brothers remained in the former Ditson Building until 1921.  On September 10 that year the New-York Tribune reported that the Haberdashers’ Novelty Company had taken over the store “formerly occupied by Klauber Brothers.”  The new occupants “consider dividing floors and stores,” said the newspaper.

Throughout the 20th century the ground floor would continue to house retail stores—Karl Gugenheim, Inc.’s toy store in 1931 and Barnes & Noble, Inc. bookstore in 1938, for instance—while the upper floors remained factory space.  In 1938 Raxy Bias Binding took space here and by 1943 the Pioneer Coat Front Company was doing business in the building.

Patriotic war-time New Yorkers were no doubt offended when Pioneer Coat Front Company was named in “conspiracy to defraud the Government” charges on October 1, 1943.  When bids went out for $18 million worth of clothing for Naval personnel, certain manufactures tried to get an upper hand on their competition.

“It was charged in the true bill handed up in Federal court that the Navy employes had received large sums of money and lavish entertainment from the others, and in return had given advance information on prospective need for Navy clothing.”
Small manufacturers and offices in mid-century included the Melrose Flower Company, manufacturer and importer of artificial flowers; and Joseph Struhl Company which introduced a motion picture titling set, The Magic Letter Set, in 1950. 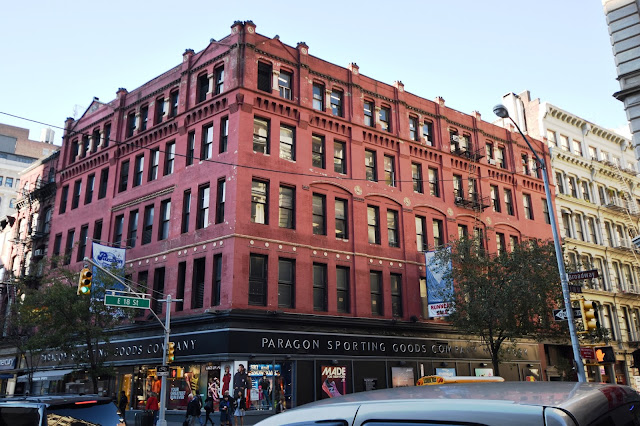 Today the massive Paragon Sporting Goods store has engulfed the entire first floor for around 45 years.  The rather neglected façade of Pope’s Romanesque Revival building has been sadly painted a dark red which disguises some of the contrast in colors of the various materials.