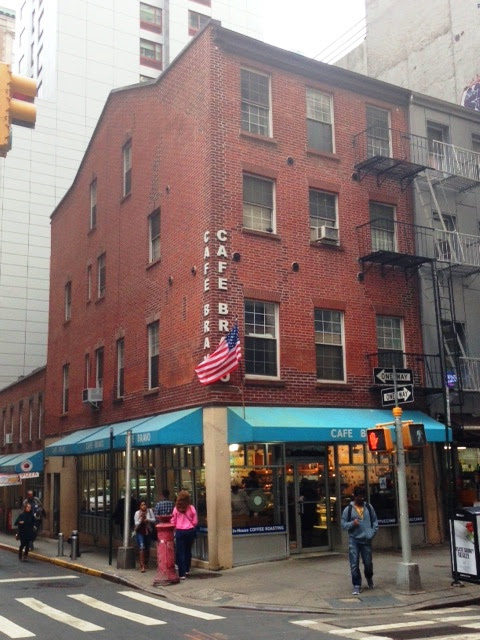 With the Revolutionary War over and the British occupation ended, the Common Council in 1787 ordered that the North River (later the Hudson River) shoreline be extended with landfill 65 feet into the river.  Seven years later the Council passed an ordinance to create Greenwich Street, stretching from the Battery to Rector Street.  The new street, completed by 1797, gently followed the shoreline and the views it offered along with the cooling river breezes in summer attracted wealthy homeowners.

The 24-year old Augustine Hicks Lawrence married Catherine, the daughter of Abraham Luqueer, in 1793.  The following year on December 1, 1794, their son, Augustine Nicholas Lawrence was born.  As Greenwich Street neared completion in 1799 Lawrence purchased the plot at the northwest corner of Greenwich and Rector Streets, stretching back the length of the Rector Street block.

The purchase was an annoyance, no doubt, to Arthur Darley who was “obliged to remove his Stone Works, as part of the ground..is to be built on immediately,” according to The Daily Advertiser on April 12, 1799.

Lawrence constructed what would later be numbered No. 94 Greenwich Street—a commodious three story and attic house with a handsome gambrel roof.  It reflected the high end status of the neighborhood with marble lintels and sills on the Rector Street side and Flemish bond brickwork.  The Lawrences’ neighbors were counted among the highest echelon of Manhattan society, with names like John R. Livingston, Robert Lenox, Abraham Schermerhorn, Gilbert Aspinwall, Nicholas Roosevelt, Gardner G. Howland, DeWitt Clinton and Robert Dickey.

The family’s stay at No. 94 Greenwich Street would not be long.  They moved to Robinson Street (later named Park Place) in 1801.  In May 1808 Jonathan Hampton Lawrence moved into the house; although it appears from letters as early as 1803 that he and partner Jonathan Dayton (for whom Dayton, Ohio is named) were operating their office from the location.  Established in 1796, Lawrence, Dayton & Co. would continue until 1807.

The glory days of No. 94 Greenwich Street were over by 1810 when it was combined internally with the house next door, which was renumbered No 94-1/2.  A commercial front was installed at No. 94 and high-end boarders moved in to the upper floors.

James Diven took over the operation in May 1820, when he advertised in the New-York Evening Post that he “will be happy to accommodate ladies and gentlemen, with boarding and lodging, by the year or otherwise.”

The combined houses continued to be operated as a boarding house for years.  But the upscale tone of the area was changing.  When Augustine Hicks Lawrence died in 1828 the houses were inherited by his daughters.   In 1837 Pretextas Delamotte opened his porterhouse at No. 94; and four years later directories listed the address as a hotel.

Delamotte’s porterhouse would change hands over the years.  Jacob Goll operated it from 1850, the same year the hotel became the Union Hotel run by Jean Baptiste Pelissier.  He lived here with his wife and daughter, along with a dozen other residents.

Madame Ove Sanbert took over the porterhouse in 1853; but by the time of the Civil War it was being termed a “saloon.”

It appears that around 1858 the gambrel roof was extended at the front and rear to provide a full fourth floor and, subsequently, additional lodging space.

By 1864 the saloon was being run by the nefarious Charles Wilson.  Underhanded and unscrupulous, Wilson’s name turned up time and again as he was arrested for scams.

On March 27, 1864 The New York Times reported he had brought before Commissioner Betts the day before “charged with passing a ten dollar counterfeit ‘Greenback.’”  The newspaper explained that a patron “went into Wilson’s saloon and offered him a good ten dollar United States note in payment for some refreshments.”

Wilson opened his cash drawer and pretended to look through his bills.  He then shut the drawer and told his patron he would have to go upstairs to get change.   Before long he returned, handed the man back his $10 bill and apologized, saying he could not provide change.  The customer took the bill, and gave Wilson a smaller one to pay for his drink.

Later he realized he had been duped.  “He afterwards discovered that the ten had been altered from a one, and that it was not the bill he had given to the accused.”

Charles Wilson and his wife, Anna, left Greenwich Street, but their wicked ways did not change.  They opened a brothel on Canal Street.  Patrick Lee was a varnisher by trade who had just returned from fighting with the Union Army.  On Friday night, July 28, 1865 he went to the Canal Street location with $225 in his pocket.

Court testimony revealed he found “three girls there; went up stairs with one of them; gave her $5.”  While he was with the girl, Anna Wilson entered, “offering to fix the bed.”  Then Charles came up and helped himself to $165 of Lee’s money and his watch.   Anna was found innocent, but once again Charles found himself headed to jail.

Despite the questionable goings-on in the saloon, the residents of the upper floors continued to be respectable.  The unmarried Bridget E. Neligan lived here at least from 1865 through 1868.  She was a teacher in the boys’ department of School No. 29 at Nos. 97-99 Greenwich Street.    And in 1860 the Cherry family moved in.  James Cherry took over the liquor business when Wilson left.  His brother Thomas Cherry, had been a policemen since June 8, 1857.

The 30-year old Thomas Cherry and his wife had eleven children.  One of them was drafted into the Union Army on March 16, 1865.  On March 14, 1871 The Sun reported that Cherry, who had been serving as Acting Police Captain, had been promoted to Captain.  Two weeks later the same newspaper reported on his aggressive action in preventing a burglary on Church and Reade Streets.  Pointing the finger at a less pro-active cop, The Sun’s headline on March 27, 1871 read “Capt. Cherry’s Example for Drowsy Old Capt. John Williamson.”  The article ended saying “There is no doubt that the vigilance of Capt. Cherry and his officers has averted an extensive burglary.”

Thomas Cherry’s salary of $2,000, equivalent to about $48,000 today, was barely enough to keep his large family housed and fed.  This is especially true when one considers that, according to his brother’s testimony in court years later, Thomas was paying $1,400 a year rent.  That left the family $600 a year—about $14,000 in 2015—to live on.  (James paid the same amount of rent, which included the saloon lease.)

The Cherry sons were therefore enrolled in the tuition-free New York City College.  In 1878 three of the boys were studying there:  Robert, who was in the “introductory classes,” Patrick, a junior, and Thomas Francis Cherry, a sophomore.

That same year, on September 23, The New York Times described Captain Cherry as “an Irishman, a Catholic, and a Democrat.”  Although the newspaper felt the need to mention that his brother “keeps a liquor shop;” it added that Cherry was “a good officer, and a popular man.”

Cherry’s wife died in 1880.  It was a devastating loss for the policeman.  When he died on March 8, 1885, his obituary noted “His health failed him five years ago, when his wife died, and he never ceased to grieve for her.”

The Sun reported the following day “He had not been out of this house for the past seven months, and never saw his new office in the renovated station.”  The newspaper said he had died of consumption in the Greenwich Street house.

At the time of Cherry’s death, seven of his children were still minors—six girls and a boy.  Because of their ages, they were entitled to his police pension.  The Times said there would be little inheritance “than the sum they will receive from the Police Benefit Association;” and The Sun bluntly added, “This is all they will have to live on, as Capt. Cherry died a poor man.”

Cherry’s destitute end was not reflected in the honors he received at his funeral.  It took place on March 12, 1885 in St. Peter’s Church on Barclay Street.  His pallbearers were of the highest ranks of the Police Department, including Superintendent Walling.  He was assisted by inspectors and captains.  The Times reported that following the ceremony, “The procession marched up Broadway, escorted by eight companies of policemen.”

About three months before Thomas Cherry’s death, James Cherry had given up the saloon business.  In December 1884 he conveyed the lease to the “store and back cellar” to Michael Shannon and Jane Sinnott.

In 1888 James Cherry moved out of No. 94 Greenwich Street.  A tragic side note to the Cherry family story involved Thomas Cherry, Jr.  After graduating from New York City College, he became an officer worker, or a “typewriter.”  The young man was plagued with insomnia and went to drastic lengths to fall asleep.

The Sun reported on December 22, 1891 that “He was in the habit of putting himself to sleep with chloroform, relying on the force of gravitation to remove the hand which held the handkerchief when he became unconscious.  He sometime used morphine to overcome the insomnia with which he was afflicted.”

But on the night of December 20, the “force of gravitation” did not work.  The young man’s hand with the chloroform soaked handkerchief remained over his nose.  He was found dead in his bed the following morning in his room at No. 18 Dominick Street.

The house remained in the possession of Augustine Lawrence’s heirs, the McCrea family, and continued to see a succession of roomers.  In November 1900 architect Edward W. F. Ufer was hired to “enlarge [the] show window” at a cost of $250.

The children of Joanna Lawrence McCrea, who had inherited the property from her father in 1828, put the house at auction on December 21, 1920.  The Times, describing it as a “four-story tenement with stores,” reported on the bidding—opening at $20,000, raised to $30,000 and “finally knocked down for $52,000 to Daniel W. McCrea, a party in interest.”  McCrea’s interest was his fifth-generation relationship to the original owner.

McCrea sold the building a year later, ending the more than 120 years of family ownership.  Throughout the rest of the century, until now, the venerable structure has undergone a myriad of uses and occupants.  The unlikely survivor just three blocks from the World Trade Center site still retains much of its 18th century flavor; despite the modern coffee shop at street level.