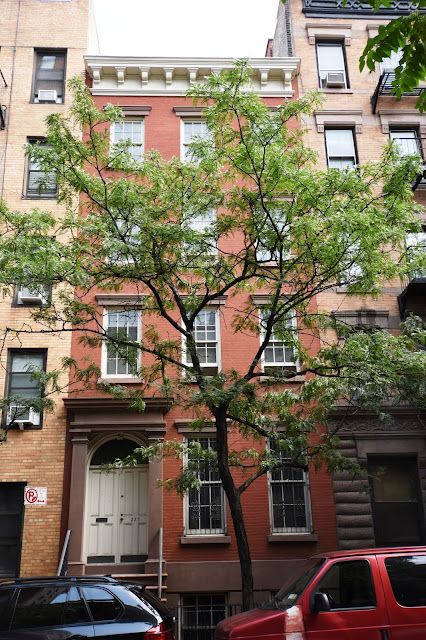 As the Chelsea neighborhood began to change from farmland to suburb in the 1820s, the first houses to rise along the blocks just above 14th Street were modest Federal-style brick homes.  But by the 1840s fine speculative rowhouses intended for financially-secure families lined the side streets.

Among them was No. 223 West 15th Street, a 20-foot wide Greek Revival home four stories tall above a brownstone English basement.  The double doors and arched entrance--sitting below a robust entablature and cornice--and the molded stone lintels, spoke of the homeowner’s merchant-class status. 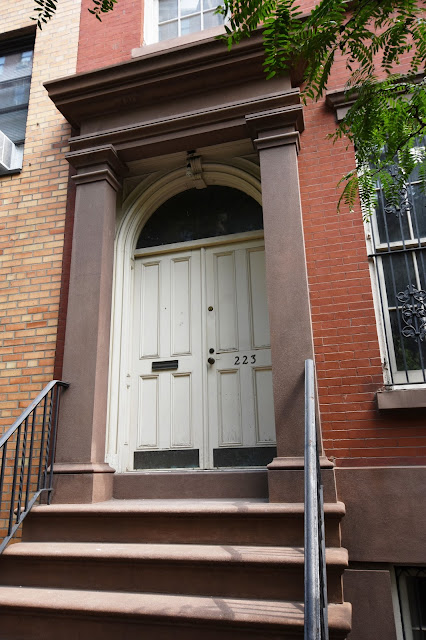 But the hey-day of private homes for the well-to-do in Chelsea would not last far beyond the end of the Civil War.  They were quickly converted as boarding houses in the 1870s and ‘80s; and as the turn of the century neared, many were being razed for modern flats.  No. 223 held out as the home of the Straban family through the 1870s.  In 1878 James Lewis Guy Straban was still attending classes at New York University.

But the Strabans were gone within the decade and “Mrs. Negrin” operated No. 223 as a boarding house.  The respectability of Mrs. Negrin’s operation was threatened when she accepted Edward Barstow as a boarder in October 1887.   Barstow’s was a thoroughly modern profession—he was a freelance “type-writer,” the Victorian term for an officer worker trained on the new machine.  He and his wife had been separated for some time when he moved into the 15th Street house.

For several years Edward Barstow had been extremely close friends with Albert and Julia Smith.  Their relationship was such that Barstow had several times lived in a room in their home.

Shortly after arriving at Mrs. Negrin’s, Barstow’s sister visited.  Because he practiced his typewriting at home when he was not engaged, she would normally visit around 3:00 or 4:00 in the afternoon.  But the special affection between the brother and sister began to raise Mrs. Negrin’s suspicions.

Later testimony would reveal that the woman “visited him frequently as his sister, at least two or three times a week…All this time they were very affectionate towards each other.”   When Barstow and his sister were caught walking arm in arm in January 1888, they “exhibited much confusion.”

Edward Barstow moved out of the boarding house in March 1888.  Mrs. Negrin’s suspicions were confirmed when she was called to testify in the adultery case of Julia Smith and Barstow in April 1891.

When Alice L. Carroll purchased No. 223 for $16,000 in May 1896 it was described as a “four-story single flat;” meaning that by now each floor was treated as an apartment.  Alice continued to operate the residence this way until 1909 when she leased it to the Roman Catholic Archdiocese.

On September 14 that year The Sun reported “There was also opened yesterday the newly established Catholic school for blind children at 223 West Fifteenth street.”  The Church’s admirable experiment was short-lived, however.  It was gone by 1911 when Alice leased the house to Francis Dignan.

While the houses along the 15th Street block were being altered or replaced; No. 223 remained essentially the same.  Alice L. Carroll retained possession of the house for a quarter of a century, selling it to Julius and Jennie Fingerut in 1921.  They, too, held the property for some time, selling it two decades later to Adelaide Bergue, who announced plans to improve it “as a rooming house.”

The long history of the old home as a boarding and rooming house came to an end in 1951 when Adelaide sold it to the trustees of Inwood House.   The organization had been formed in 1830 to aid unwed mothers and their children.   Their work was applaudable in Victorian New York when such women were most often seen as “fallen” and their children were openly referred to as bastards.

The work of Inwood House in the early 20th century was expressed by Mrs A. Barton Hepburn on March 31, 1918 when she appealed “Our babies at Inwood House need your help.  They deserve the chance which too often their mothers have not had.”

Now at midcentury, No. 223 was a sort of annex to the organization’s facility at No. 228 West 15th Street.   The pregnant, unwed teens in the 1950s and ‘60s were in many ways far different from those in the 1830s; but their needs were in many ways very much the same.

Inwood House would continue to operate from 15th Street until around 1964 when it moved northward to 82nd Street.    An ambitious renovation was begun on No. 223 West 15th Street that, when completed in 1967, resulted in its return to a single-family residence for the first time in 80 years.

Among the scant number of survivors on a block lined with 1890s apartment buildings, No. 223 is a lovely reminder of a time when the neighborhood was populated with well-to-do families.