The School of Applied Design for Women -- No. 160 Lexington Ave. 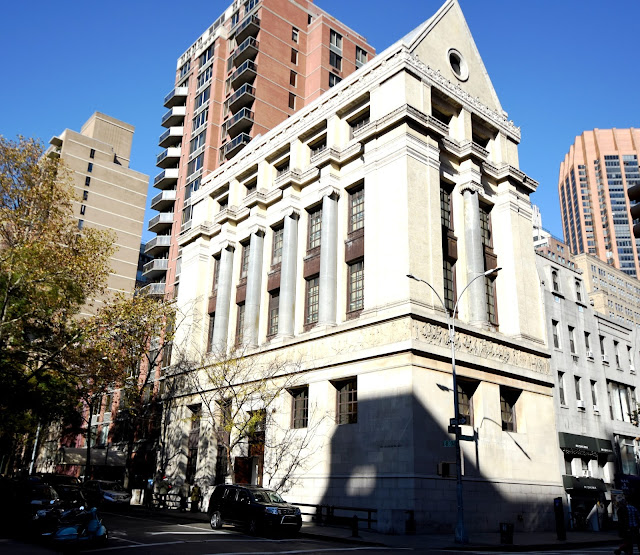 As the 19th century drew to a close, collectors had begun to take American art seriously.  Millionaires, who had for decades scoured Europe for paintings and sculptures to adorn their mansions, took a new pride in home-grown artists.  Another movement was taking hold as well.   The world of professional art had been one almost exclusively of men.  Now female artists sought equality.

On May 31, 1892 socialite, painter and philanthropist Mrs. Ellen Dunlap Hopkins founded the New York School of Applied Design for Women.  Ellen came from the old and respected Pond family of Massachusetts.  Initially the school was only a step removed from a trade school, its goals were “…affording to women instruction which may enable them to earn a livelihood by the employment of their taste and manual dexterity in the application of ornamental design to manufacture and the arts.”

The New York Times explained “Mrs. Hopkins’s theory in starting the school…was that with the increasing demand for original and artistic designs for carpets, oil cloths, wall papers, silks, book covers, &c., there was a field for the employment of women of natural art taste and ability, could they obtain practical training at a low cost.”

At the school’s opening, Ellen Dunlap Hopkins described her initial 45 students as “women who were determined to study in order to compete with men in the arts, and whose endeavor it was to make places for themselves in the branches of their choice, not by asking sympathy and not by taking less pay than men, but by the excellence of their work.”

Ellen Dunlap Hopkins rented several floors in a building at Seventh Avenue and 23rd Street in what had become an artistic center.   The Artist-Artisan Institute Building sat nearby at Nos. 136-140 West 23rd Street.  The building was shared with the School for Industrial Art and Technical Design for Women.  The Associated Artists was at No. 115 East 23rd Street; and an artists’ studio building had opened at No. 44 West 22nd Street.

Only three months after the school opened, it created waves across the nation.  The New-York Tribune reported that a collection of “designs of wallpaper, carpets, silks, rugs, book-covers, architectural plans and designs and water colors, all the work of the new students,” was exhibited in New York before being sent to the World’s Fair in Chicago.  “From there it was forwarded by request to the Midwinter Fair in San Francisco, and has already been spoken for by the Countess of Aberdeen, to be exhibited at the coming Canadian exhibition.”  The fledgling school earned four gold medals in Chicago and three in San Francisco.

Students paid a $50 tuition fee per year.   After passing through the elementary department “where the student is taught the first steps,” according to the Tribune on September 30, 1894, she moved to the “advanced” class where “she is left to work out her own artistic salvation.”

The concept and success of the school was quickly noticed overseas.  Just two years after its founding, Ellen Dunlap Hopkins was invited by the British royal family to establish a branch school in London.  That school was opened under the patronage of “Princess Christian, the Princess of Wales, and other members of the English royal family and the nobility,” reported The New York Times.

Meanwhile the student body of 45 had grown to nearly 400 by now.   On September 30, 1894 the New-York Tribune noted that the school “is self-supporting, and the work of its students is so constantly in demand that the supply is inadequate.”  The rented space on West 23rd Street could not accommodate the growing school for many more years.

On January 30, 1906 The New York Times reported that “The property at the northwest corner of Lexington Avenue and Thirtieth Street is to be made the site of a new six-story building, which will be occupied by an art school.”  The art school was, of course, the School for Applied Design for Women, and the two houses sat at Nos. 160 and 162 Lexington Avenue.

Plans for the new building were filed by the architectural firm of Pell & Corbett and construction did not begin until 1908.  It was partner Harvey Wiley Corbett who designed the building.  The choice of architects was doubtlessly influenced by Corbett’s position as an instructor at the school.

The costs were also offset by fund-raising events like the “large bridge tournament” at the Hotel Gotham ballroom on January 29, 1909.  Socialites played for prizes donated by some of the most recognized names in art and literature.  The New York Times listed “autograph sketches and books from artists and authors, including Ernest Thompson Seton, Arnest Peixotto, Alphonse Mucha, Brander Matthews, Richard Watson Gilder, and Mark Twain.”

Corbett had produced a seven story beauty of brick and stone with an impressive bas relief frieze above the second floor highly reminiscent of the Elgin Marbles.  Two-story polished gray engaged columns supported a cornice which somewhat playfully zig-zagged in and out following their contours.  Corbett included a good-humored single column on the Lexington Avenue elevation.

The increased floor space included an exhibition room and even before the formal dedication, a permanent exhibition of work done by the advanced students was opened.  “This is something that the management has long desired to have, but in the old, limited quarters, in West 23d street, it was impossible,” reported the New-York Tribune on March 2, 1909.

Although Ellen Dunlap Hopkins lived in style in a mansion at No 31 East 30th Street; the new building included apartments for her.  They would prove effective for holding receptions, luncheons and other entertainments for the benefit of the school.

Among guests received here were the Countess of Aberdeen and Mrs. Andrew Carnegie, who visited on January 17, 1913 and “spent several hours there,” according to The New York Times the following day.  The newspaper noted “The school, which is the only one of its kind in the country, has 560 students.”

As the student body increased, so did the curriculum.  The exhibit of student work, occupying four full floors of the building on May 16, 1922 reflected the expanded courses.  The New-York Tribune said it “included work in illustration, fashion design, commercial art, composition work, textile design, historic ornament, flower painting, architecture and interior decoration, antique drawing and sketching.”

The socially powerful with whom Mrs. Ellen Dunlap Hopkins rubbed shoulders was reflected in the guest list of a reception and musicale she held in her apartments here on January 15, 1928.   The guest of honor was around-the-world aviator Lt. Leigh Wade of the U.S. Navy.  In the room that night were Manhattan’s socially prominent, including Mrs. Stuyvesant Fish, Mr. and Mrs. George F. Baker, Jr., Mrs. Charles A. Van Rensselaer, Mrs. Andrew Carnegie, Mrs. Benjamin Harrison, Mrs. John Henry Hammond, Mrs. John W. Alexander, and Mr. and Mrs. Elihu Root among others.

The students enjoyed a social life as well.  On May 13, 1929 The Times noted that “The annual student dance of the New York School of Applied Design for Women…will be held on Friday evening in the library of the school.”

The indefatigable work of Ellen Dunlap Hopkins was recognized in December 1938 when she was conferred the decoration of Les Palmes d’Officier d’Academie by Minister of Education of the French Government.  The award had been established by Napoleon I in 1806.

Two months later, nearly half a century after she established the School of Applied Design for Women, Ellen Dunlap Hopkins died at the age of 81.   Her funeral was held on February 6, 1939 in the school.  Among the distinguished mourners was the architect of the building, Harvey Wiley Corbett, who was now President of the school.  He would hold the position until his death in 1954.

The School of Applied Design for Women continued to respond to the changing professional needs of its students and the community.  On July 14, 1940 the school announced a new department for teaching costume design.

But the school’s most radical change came about in 1944, when it merged with Lauros M. Phoenix’s art institute.  The merger meant that men were now included in the student body.  In the early 1970’s the New York-Phoenix School of Design added photography to the curriculum; an area that gained popularity and importance.

In 1974 the school merged again—this time with the Pratt Institute.  Renamed the Pratt-Phoenix School of Design it continued in the building still unaltered after seven decades.     The exterior of structure was given landmark status in 1977.

When Touro College took over the edifice it initiated an interior renovation, completed in 1990.  The $750,000 renovation converted the interior spaces to modern classrooms.   But Touro’s ownership would not be especially long.  On May 29, 2007 the building was put on the market; the announcement saying “The property is currently vacant awaiting the next user to enjoy its voluminous interior, high ceilings, abundant light and air and architectural grandeur.” Because of landmark designation the exterior of the astonishingly-unaltered School of Applied Design for Women building looks exactly today as it did in January 1909 when it opened.

thanks to Paul Stumpf for requesting this post.
photographs by the author
Posted by Tom Miller at 1:58 AM