Charles B. J. Snyder was appointed Superintendent of School Buildings—a title equivalent to official school building architect—in 1891.   Within three years the Compulsory Education Law of 1894 would be put into effect, mandating that all children were required to receive schooling until at least the age of 14.   But for low-income parents and the educators of their children, the law was problematic.

Formal education not only held little relevancy to children whose futures were destined to be spent in factory work or other menial labor.  And it meant that they were provented from taking jobs and assisting their families financially.

The problem had been addressed decades earlier by Industrial Schools where impoverished boys learned trades such as shoemaking and carpentry.  But it would not be until November 1902 that the first vocational school for girls was organized—the Manhattan Trade School for Girls.

The school was established at No. 233 West 14th Street, “which was equipped like a factory and could comfortably accommodate 100 pupils,” according to The Making of a Trade School in 1909.  The school opened with 20 students, but was soon “overcrowded.”  In June 1906 it was moved to larger quarters at No. 209-213 East 23rd Street.  That, too, would soon be insufficient.

Originally, the school trained girls in trades until they were 14 years old—both the compulsory education age and about the time a girl could get an industrial job.   Untrained girls, it was felt, “complicate the industrial problem by their poverty and inability, and thus tend to lower the wage.”

In the Trade School for Girls, the students could choose their focus from among the use of electric and “foot-power” sewing machines; use of paste and glue (necessary for millinery trimmers and costume jewelry work); or “use of brush and pencil.”

In addition, the girls received physical education.  The educators realized that when the girls left the school they would be required to work eight or more hours a day “in which they must strain every nerve and bend all of their energies.”  Therefore gym classes sought to ready them.

As the girls neared the completion of their courses, they were trained in interviewing skills and given placement help.

Mrs. Morgenthau warned that the insufficient facility was resulting in girls wandering the streets.  “At the beginning of February, when thousands of children pour out of the public schools, hundreds of them had to be refused admission to this school.  This brought about a dangerous condition.  There was little work to be had, and walking the streets, hopelessly looking for a job, tends to moral deterioration.”

In response to the situation C. B. J. Snyder set to work on designs for a spacious and up-to-date school building at No. 127 East 22nd Street, at the northwest corner of Lexington Avenue.  By now Snyder had made a name for himself through his innovative design concepts that enhanced light, ventilation and fire safety.   As he often did, he turned to Collegiate Gothic for this school building.   But the Manhattan Trade School for Girls would be substantially different.

Construction of the massive structure would take years.  In the meantime, young girls were entering the workplace with skills like dressmaking.  Employers called at the school in search of trained and talented workers.   Unskilled girls entering garment factories could expect to make about $3 a week.  On February 18, 1916 Jessie Adams, an instructor in the dressmaking department, explained to a reporter from The Evening World that a girl leaving the school as a draper could earn from $9 to $11 a week; a dressmaker from $12 to $15 a week; and “if a girl has ability and intelligence enough to become a designer, there is practically no limit to her earning capacity.”

The new $700,000 school building was finally completed in the summer of 1918.   Students, excited to see the new facility, were stopped short when the United States Government announced it wanted to take it over as a war hospital.   Discussions ended on September 7, 1918 when the War Department decided that the school was more important to “war work.”   An official announcement declared “It is not the policy of this department to interfere with educational procedure.”

In fact, the graduates of the school were quickly being swooped up by factories making army uniforms and other garments.   The war had depleted the work force and women were needed in many capacities.  Prior to the war, for instance, the majority of gloves were imported from Germany.  “Now,” wrote the New-York Tribune on September 8, “American manufacturers are making experiments with these materials and gloves will hereafter be made here.”

The Sun, on September 5 that year, noted “The Manhattan Trade School for Girls has especially varied courses, running all the way from waist draping to military drill.  War work is given first place, and girls going there can learn canteen work, cooking and food conservation or how to be a nurses’ aid.”

The new building was able to accommodate 1,200 girls during the day and 2,000 in the two sets of night classes.  There was a roof garden, “spacious gymnasium and shower baths for the recreations and health of the girls,” according to the New-York Tribune.  And the additional space made possible an enlarged curriculum.

Training in cooking and restaurant work were made possible by the 9th floor school lunch room, which the students managed, and a ground floor cafeteria and tea room open to the public.  “These two lunch rooms will make possible the training of girls for cafeteria and canteen workers who are now in great demand, as well as the teaching of cooks and cooks’ assistants, who are soon going to be wanted in the army, since it has been decided to use women for these positions,” said the Tribune.

There was also a retail shop at street level for the sale of clothing and other articles made by the girls.  Here the students gained retail experience and put their non-trade learning—such as math and English—to good use. 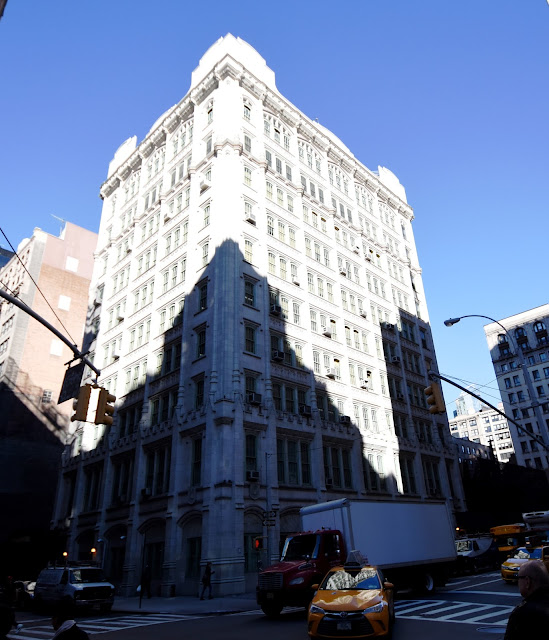 The expanded curriculum was outlined by the New-York Tribune on November 25, 1918.  “Manicuring and shampooing have been added to its list of major courses offered, and the subjects studied now include, in addition to these, dressmaking, millinery, flower and feather making, lampshade making, novelty making, sample mounting, garment machine operating, straw hats, kid gloves, embroidery, laundry and cafeteria work.”

Some of the operating expenses of the school were offset by the sale of the girls’ work.  In 1917 more than $20,000 had been taken in.  The money was returned to the school from the City, and used for the purchase of consumable materials—such as thread, fabrics, glues, and food for the lunchrooms.

The system went smoothly until June 1920 when Controller Craig decided that the $25,000 earned by the pupils within the past 18 months belonged to the City and not the school.  On June 23 The New York Times decried the move with a rather dramatic headline:  TRADE SCHOOL MAY CLOSE.

The article began “The Manhattan Trade School for Girls may have to curtail or even stop its activities because the $25,000 earned by the pupils…is being withheld for some reason by Controller Craig.”   The Times’ outcry along with public ire changed the Controller’s mind.

One wealthy socialite made a point, beginning in the winter season of 1921, to send 40 or more tickets to the theater, opera or symphony concerts to the school.    The school’s director, Florence Marshall, had the unhappy task of selecting the few girls among the 1,000 to receive the gifts.   It occurred to her as the winter season of 1923 approached, that perhaps other generous New Yorkers may like to give as well.

On October 11 she wrote a letter to the editor of The Times, explaining that her girls certainly could not afford tickets themselves and “have little or no opportunity to hear and see the best musical and dramatic productions.”   She described the girls, from 14 to 18 years old, as “in the main, splendidly ambitious girls, who, we are sure, will do much in the future to make industry a better place for women to work in and homes better places to live in.”  She asked that if anyone had tickets for the “opera, drama or music” that they could not use, to please send them to her at the Trade School.

Florence Marshall was overjoyed when her plea was answered by a flood of generous donations of theater tickets that season.

The Christmas season provided an additional reason for New York women to visit the school’s sales room.  The vast array of items was evidenced in a notice of a special sale on December 12, 1924 of articles “suitable for Christmas gifts.”  Included were “silks and cotton patchwork quilts” and “blouses, dresses, hats, children’s clothing, hand and machine-made underwear, and novelties.”

By 1929 the Board of Education had changed the school’s name to the Manhattan Industrial High School for Girls.  Little changed within its walls, however.  When a “spring sale” was held in the shop the first week of May 1932, The New York Times wrote “Children’s clothes, towels, hats and dresses for adults, neckwear, lampshades, novelties, cakes, cookies and pies are among the articles on sale.”

Another name change came around 1948 when the school became the Mabel Dean Bacon Vocational High School.   Little by little the curriculum would change to reflect the times.  In 1957 students were still learning lampshade making and hairdressing.  But by 1982 the focus was more on business education, nursing, dental assistance and cosmetology.

Nearly three-quarters of a century of weather and wear took its toll on Snyder’s terra cotta façade.  In 1985 a restoration by the California-based Gladding, McBean & Company was initiated.  The oldest terra cotta manufacturer in the country, it reproduced elements that were either lost or irreparable.  The ambitious project stopped short of reproducing the magnificent openwork panels of the parapet which had been removed.

By 1998 the school was made the School of the Future.  Although part of the New York City Department of Education, it was founded in 1990 with significant funding by Apple Inc.   The school, with classes ranging from grades 6 to 12, could not be any more different than the Manhattan Trade School for Girls.

Boys and girls from all boroughs pass through an interview process.  The School of the Future prides itself on the diversification of its student body—“ethnically, economically, academically, and geographically” different children.  The school focuses on small class sizes and “student-centered learning.”

C. B. J. Snyder’s handsome terra cotta building survives mostly intact; a reminder of a time when underprivileged girls facing a terrifying future were given hope.

photographs by the author
Posted by Tom Miller at 1:10 AM