In 1898 Prominent Families of New York commented on New York’s “many famous merchants in the closing years of the last and the first half of the present century.”  The tome opined “…it is not too much to say that foremost among the most energetic and enterprising of them were those who were of the intelligent and thrifty Scottish race.”

One of those Scottish-born businessmen was Adam Norrie who arrived in New York in 1820.  Norrie joined the already-successful firm of Boorman & Johnston and amassed a substantial fortune.  He was known not only for his brilliance in business; but for his generous philanthropies.

In 1853 Norrie’s only son, Gordon, constructed a stately brownstone mansion at No. 377 Fifth Avenue.  The exclusive tone of the block was evidenced by his next-door neighbor at No. 379—Commodore Cornelius Vanderbilt.  Gordon and his wife, the former “Miss Lanfear of New Orleans,” had three daughters and two sons.   In the 1880s sons A. Lanfear Norrie and Adam Gordon Norrie were both attending Columbia College.   One by one the children would marry—each wedding a socially prominent event—leaving their parents alone in the Fifth Avenue mansion with their servants.

The first decade of the 20th century saw the Norrie’s neighborhood drastically changed.  Two blocks to the south the Astor mansions had been replaced with the Waldorf-Astoria Hotel.  Just steps away from the Norrie mansion the massive B. Altman & Co. department store stood at the corner of Fifth Avenue and 35th Street.

But unlike most of his neighbors, Gordon Norrie stayed in his vintage brownstone.   Then, on the afternoon of November 8, 1909, he died at the family’s summer home in New London, Connecticut.  Ten days later it was announced that he had left “the jewelry, paintings, statuary, books and other contents of his town house at 337 Fifth avenue to his wife, as well as the country home and its contents at New London.”

Before long Norrie’s widow left the house and it was gently converted for business purposes.  When the shop of Crocker, “Mourning Specialty House,” next door at No. 375 was damaged by fire in 1917, the firm moved into No. 377.  The specialized store sold mourning apparel and related accessories—so important in the Edwardian era.

Throughout the next two years the “basement store” and the upper floors would be leased to various small businesses, including the Duryea War Relief office in 1919.  That year on August 19 Nina Larrey Duryea wrote to the Editor of the New York Times pleading that thousands of children in Lille, France, “are in a grave physical condition.”  Calling them, “maimed and depleted,” she explained that the Duryea group sought to send them to the country, “where they could live in tents set up in the big open fields and receive medicinal treatment.”  The letter urged readers to send cash to the 377 Fifth Avenue office so “these innocent little ones, who suffered for four years in a way that no American child has ever suffered, may be saved for the future of France.”

Before long the Duryea War Relief office would have to find other accommodations.   Two months earlier, on June 25, 1919, gossip circulated that Emily L. Norrie had sold the former family home.  “According to one rumor a large retail concern has bought the building and intends to alter the structure for its exclusive occupancy,” reported The Sun.

Finally the hearsay was put to rest when on October 19, 1919 The New York Times reported that “The old Norrie residence at 377 Fifth Avenue, one of the landmarks of the section, was sold yesterday.”  The Childs Restaurant Company had paid $450,000 for the property as a site of another restaurant in its extensive chain.  On the same day The Sun reported “The Childs company will erect a modern business building for its exclusive use on the plot.  The building is expected to be six of seven stories high.”

Rather than erect a new building, the firm commissioned the architectural firm of Severance & Van Alen to convert the brownstone mansion into a modern commercial building.  Completed within 10 months, the limestone-faced restaurant and office building revealed no hint of its former life.

The Childs Restaurant chain was as well known for its architecture as for its food.  William Van Alen (best remembered for his designing of the Chrysler Building) designed at least two structures for Childs.  The completed No. 377 was so restrained in its ornamentation that it appeared nearly unfinished.  There was no cornice and the tall base was severely planar.  A sixth floor opening was ornamented with a broken pediment and urn (echoing the two classic urns perched on the spartan parapet) and a French-styled Juliet balcony.  Only the spandrels of the second floor, with delicate festoons, were ornamented.

The first tenant of the upper floors was Fruhauf Brothers & Co., a clothing manufacturer, which took the fifth floor.  Henry Fruhauf was highly involved in local politics and interested in police work.  Later, in July 1925, he would be appointed “Special Deputy Commissioner” by Police Commissioner Enright.

The New York Times explained on July 19 that “He has been connected with the Police Department for the last three years as Honorary Captain and Honorary Inspector.  The position of Special Deputy Commissioner bestows most of the privileges of a Commissioner, but carries no salary.”

Fruhauf’s name would be in the newspapers for another reason that year when he organized the “Five Cent Fare Club.”   When Mayor John F. Hyland opposed a proposed hike in public transportation fares, the clothing merchant jumped into action.   His “club” was actually a petition.  He started with the names of his own employees, and by August 1925 had accumulated over 12,600 signatures.

He explained his motivation to reporters saying that “with the continuance of a five-cent fare, enabling his employes to get out of the congested sections of the city to where they could live comfortably, he would have no difficulty in getting labor.”

Childs remained in the first floor space for decades.  The country’s entrance into World War II created changes in the lifestyles of Americans.  Commodities like sugar, silk and gasoline were no longer as easily available.    In 1942 the Government put a freeze on tin and, as a result, alloys became scarce in the private sector.

On April 1, 1942 The New York Times reported that “Silver is taking the place of white metal in costume jewelry, it became evident yesterday." The alloy consisted of 90 per cent tin.  The restriction caused the closing of tenant Leo Glass & Co. 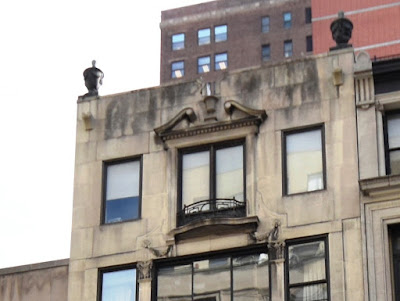 The jewelry firm announced that it was shutting down for the duration of the war.  “We are retiring because we cannot get any of the types of metals which we are accustomed to sell, including brass and white meal, which form the foundation of our business,” said Leo Glass, president.  He added “it was patriotic not even to attempt to manufacture novelties and costume jewelry of raw materials which are essential to the manufacture of defense products.”

The Childs Company sold the building in 1945, moving its restaurant out after a quarter of a century.  Throughout the remainder of the century the building saw a wide variety of tenants, many from the novelty and accessory industries.  In the 1940s the Newark Glove Company, the showrooms of the Amber and Filflex Foundations, and the Valjean Pearl Corp showrooms were in the building.

The 1950s saw No. 377 home to Handbag Fashions, and to Majestic Specialties, Inc., manufacturers of “handbag frames, compacts and parts.”  And in 1966 Sportsmen’s Affiliates, Inc., offered life insurance for professional athletes in their 4th floor offices.

Severance & Van Alen’s elegant street level façade has been replaced with an uninteresting modern storefront.  Where Fifth Avenue shoppers and businessmen stopped for lunch in the 1920s, tourists now pick through cheap t-shirts and souvenirs.  The upper floors, however, remain essentially intact since the brownstone façade of Gordon Norrie’s home was stripped off and replaced with limestone.