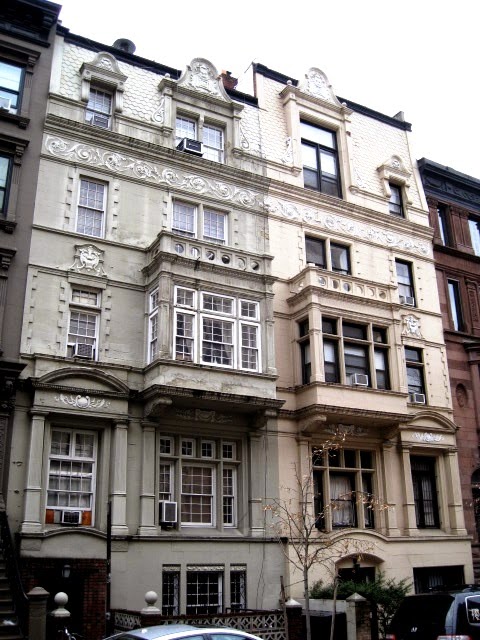 In 1886 construction was started on two adjoining houses for developer Charles H. Bliss.  The plots at Nos. 44 and 46 West 85th Street were located in a quickly developing area where upscale residences were filling the blocks.  Bliss had commissioned Edward L. Angell to design the homes.  The architect was busy at the time creating Upper West Side homes with his personal take on historical styles.

But for Bliss’s two speculative mansions he turned to the recently popular Queen Anne style—for the most part.  One can almost imagine Angell sitting down at his drafting table and saying to himself, “let’s have fun.”  Never one to be reined in by architectural purity of style; he splashed the facades with touches of neo-Tudor.  The resulting, mirror-image homes, completed a year later were fanciful, delightful and impressive.

The brownstone-clad facades were trimmed with contrasting stone quoins.  Whimsical decorative carvings and imaginary heraldic ornaments vied for attention with the aggressive second floor bays (which provided a balconies at the third floor), and the tiled mansard roofs with their scalloped dormers.  Stained glass transoms enhanced many of the openings, and graceful dogleg stoops turned to face one another at sidewalk level.

It was perhaps the steep price of the 25-foot wide homes that resulted in sluggish sales.  Bliss listed them at $67,500 (about $1.75 million in today’s dollars) and neither sold until 1889.  Bliss sold No. 46 in December to James Kearney.  In reporting on the sale, the Real Estate Record & Builders’ Guide called it an “elegant four-story Ohio stone front dwelling.”

In the meantime, the Spaulding family was living next door at No. 44.  Young Morrel Boughton Spaulding was attending the School of Mines in 1892.  But the lifespan of No. 44 as a private home would be very short lived.

On May 14, 1905 The New York Times reported that “Leading Japanese residents of New York yesterday organized the Nippon Club, which will occupy a handsome house at 44 West Eighty-fifth Street, now a private residence.”  The newspaper noted that the Nippon Club would be the only large organization of its kind outside Japan.  “The membership will include Japanese bankers and merchants, those represented in the professions and the Government service.”

The members had decided not to go overboard in remaking the house in Japanese style.  “In point of furnishings the Nippon clubhouse will be finely equipped.  While the American style will prevail a Japanese atmosphere will be maintained by handsome bronzes, teakwood tables, and exquisite Japanese silks, hangings and bric-a-brac.”  One room on the second floor was designated as “the Japanese room.”  Edward Angell’s mantelpieces were removed, replaced by Japanese tokomoma with silk panels.  Japanese artists were commissioned to produce the sliding doors and windows, decorated “in the Fusuma style.”  All of the furnishings in this room were covered in Japanese silks and embroideries.

A Japanese chef, “experienced in the mysteries of Japanese delicacies,” was brought from Japan and arrangements were made for the importation of Japanese foods—dried mushrooms, bamboo shoots, chicory, Japanese fish, rice, Giokuro coffee, sake-rui, Japanese cocktails and chrysanthemum masamune.”  The members told the press that the menu would be “such as is served only in the houses of Japan’s aristocracy.”

The renovations included “billiard rooms, smoking room, parlors, library, and a banquet and ball room,” said The New York Times.  When the clubhouse was opened in June 1905, the Nippon Club had a membership of 75.

As the club was being organized, Japan was at war with Russia.  Two months after moving into No. 44, the defeat of the Russians seemed inevitable.  On July 31, 1905 300 proud Japanese businessmen assembled in the clubhouse “to listen to addresses by some of the heroes of the fleet that smashed the Russian navy about Port Arthur and in the Sea of Japan,” reported The Times.  Traditional Japanese deportment did not allow for boisterous celebration and self-applause.

Western journalists had a difficult time reporting on the club’s activities without exposing a hint of Edwardian racism.  In 1906 the American Druggist and Pharmaceutical Record began its report on a dinner held at the club with the line “A typical Japanese dinner, in which chop sticks played an important part, was tendered Wednesday evening, March 21, to Oscar W. Smith.”

Nevertheless, there was much to report over the years.  Every important Japanese political or military figure who visited New York was entertained here.  On June 11, 1909 Vice-Admiral Sotokicci Uriu of the Imperial Japanese Navy and his wife were guests at a glittering reception.  “The entire clubhouse was festooned with green branches and the national flower of Japan, the cherry blossom.  Japanese lanterns hung from the ceilings and everywhere were the crossed flags of Japan and the United States,” reported The Sun the following day.

The newspaper called the manner in which the club served refreshments “unusual,” saying “Each room was given up to one particular kind of refreshment.  Rice cakes were served in one room, fruits and wines in another, while in the reception room, which is furnished wholly in Japanese style, ice cream and cake were served.”

Upper floors in the Nippon Club were used by some members as sleeping rooms or apartments.  In 1908, Shinguro Arakawa, a silk merchant with a store at No. 109 Prince Street, was living here.  On October 30 that year R. Fukui, a traveling salesman for a Tokyo novelty house, had taken the room next door.  That night Ceceilia Ohnishi, the 15-year old daughter of the club’s manager, heard a noise in an unoccupied room.  When she peeked into the doorway, she discovered a burglar.

“Her screams aroused thirty-five members of the club, who were in the billiard room and dining rooms, and the burglar ran to the roof with all the Japanese in pursuit,” reported The Times the following day.  A policeman on the street heard the commotion and ran into the club.  He exited a fourth floor window and saw the burglar running across the roofs.  Policeman Weckerson “started after him, but ran into a clothesline, which he did not see in the dark, and, falling backward, was stunned by striking his head on the roof.  The burglar got away,” reported the newspaper.

Sadly for Arakawa and Fukui, the robber made off with some of their possession.  Arakawa lost a $150 watch, three stickpins worth $100 and expensive Japanese silks.  The novelty salesman lost a set of pearl vest buttons set with emeralds.  He told officials they were worth $200.

None of the club’s visitors would be more important than that of Yoichi Katsura, son of Prince Katsura, ex-premier of Japan, who arrived in New York in August, 1912.  The young man had been accompanying his father on a tour to Russia and then the United States, when the Prince was recalled to Japan following the death of Emperor Meiji.  Now in New York, newspapers said that he had been offered “the hospitality of the Nippon Club, 44 West Eighty-fifth Street.”

At the time the Nippon Club was putting the finishing touches on its new clubhouse on West 93rd Street, designed by John V. Van Pelt.  After leasing the house on 85th Street for seven years, it had now decided to purchase its own property.

The house became home to well-known violinist Herwegh von Ende and his wife, Adrienne.  Born in Budapest, Adrienne was the god-daughter of Franz Liszt.  Her father, Edward Remenyi had been a Hungarian patriot and, like her husband, was a violinist.  The couple’s entertainments were most-often music-related; such as their reception in February 1914 for renowned pianist and composer Leopold Godowsky.

But more importantly, von Ende transformed the former clubhouse to the von Ende School of Music.  Adrienne taught voice and other instructors, deemed by the school’s advertisements to be “masters of celebrity,” provided a full range of musical instruction.  The American College and Private School Directory noted that the school was “co-ed” and offered both “board and day” classes.

The house was the scene of regular recitals and concerts open to the public.  The highlight of the year, however, was the annual concert of the von Ende School of Music held at the Waldorf-Astoria.

Following Herwegh von Ende’s death in 1919, Andrienne moved to the Wellington Hotel where she died in 1945.

In the meantime the house next door had had a rocky start.  After James Kearney purchased it in 1889, he resold to John A. Rochford.  Rochford sold it in February 1890 to John P. Paulison who resold it 20 days later to Peter J. Brady.  A week later Brady sold it to J. S. Robinson for $65,000--$2,500 less than Kearny had paid for it a year earlier.  Nevertheless the Real Estate Record & Guide still described the home as “elegant.”

Before the turn of the century William Hyde and Mary B. Simonson had purchased No. 46.  William’s widowed mother, also named Mary, moved in with the large family, which included his physician son, Jeremiah T. Simonson.  It was no doubt the Simonson family who sympathetically raised the level of the mansard, thankfully lifting the ornamentation of the dormer rather than replacing it.  The extra height made the smaller dormer look oddly diminished.

William Hyde Simonson’s ancestors had been among the first settlers on Staten Island and Manhattan soon after the Dutch arrived.  The New York Lumber Trade Journal said that his family “had always been engaged in the shipbuilding and lumber business.”  He had joined his father’s lumber firm in 1866 and, following his father’s death in 1883, expanded the business to one of the major lumber concerns in the city.  An avid yachtsman, he was active in both the New Rochelle and Larchmont Yacht Clubs and owned several yachts.

Dr. J. T. Simonson set up his office in the 85th Street house, publishing his office hours as 10:00 to 12:00 and Sundays by appointment only.  The doctor focused on diseases of children and by the turn of the century was listed as an "instructor in paediatry."  Eventually he would become a Professor of Pediatrics at New York Medical College.

While the house next door changed from Japanese clubhouse to music school, the Simonson family lived on in No. 46.  Another funeral would be held in the house on September 8, 1917.  William Hyde Simonson died in his bedroom at the age of 74 on September 5.

A year later, in August 1918, his daughter Mary Hyde Simonson was married to Caleb Rowland Nash.  It signaled the beginning of the end of No. 46 as a private home.  On September 19, 1919 an advertisement appeared in The Sun:  “46 West 85th Street, near Central Park West; one, two, three rooms, kitchenette and regular housekeeping; new and modern improvements.”  A few months earlier two of Mary’s brothers, George and H. S. Simonson, had formed the 46 West Eighty-fifth Street, Inc. realty firm.

Interestingly, however, 25 years later when Dr. Jeremiah T. Simonson died in 1944, his obituary noted that two sisters, Mrs. Caleb R. Nash and Sarah A. Simonson, were still living at No. 46 West 85th Street, “the family home.” 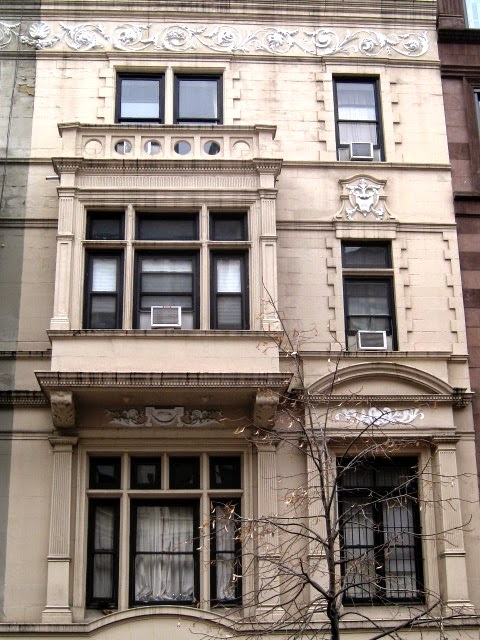 As with the Simonson home, rooms in No. 44 were now being rented as apartments; listed in 1948 as a “five-story apartment house for 13 families.”  In 1956 36-year old Elynore Rich was living here when she came up with a regrettable way of making extra money.

On September 5 she walked into the Chemical Corn Exchange Bank on Columbus Avenue near 81st Street.  She passed a note to the teller that read “Give me $500.  Don’t turn the alarm.  My little girl needs clothes.”

According to The New York Times the teller, Eileen Higgens, merely smiled and said “I can’t.”  She then returned to her work.  Elynore walked out of the bank and was arrested across the street soon after.

Although the tall stoops have been removed, the stained glass transoms pulled out; and the stone facades painted pastel colors, Edward Angell’s whimsical yet “elegant” twin houses still do what he intended—they force the passerby to pause and wonder.