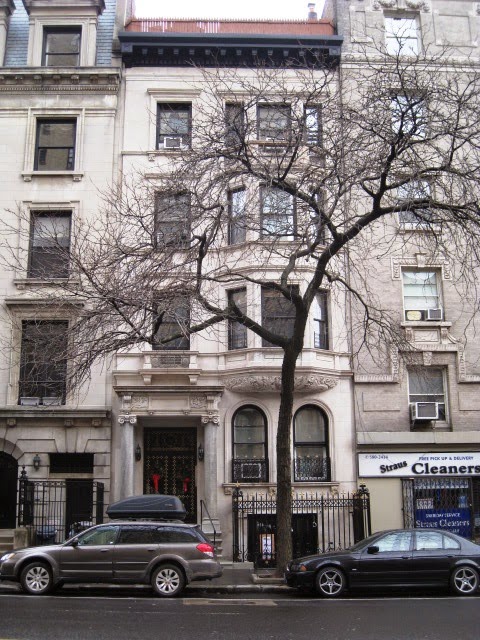 At the turn of the last century, Sarah Harris was an active player in what was mostly considered a male-only game—real estate development.  In 1907 she embarked on a project with architects Neville & Bagge that was a little more personal—her own impressive mansion.

Harris had acquired the ample 25-foot wide building lot at No. 50 West 86th Street.  The block of the avenue-wide street between Central Park West and Columbus Avenue had only just begun seeing the rise of elegant mansions in the past few years.    Sarah Harris’s limestone-faced Renaissance Revival home would hold its own with sumptuous houses on opposite side of Central Park.

Completed that same year, it rose four stories above a the basement, the entrance to which was below the arched parlor windows and behind an imposing iron fence and gate.  The main entrance sat upon a five-stepped white marble stoop and was sheltered by a shallow portico upheld by gray granite Ionic columns.  Gilded bronze doors not only provided security, but announced that Sarah Harris had money.

The architects embellished the underside of the three-sided bay at the second floor with heavy foliate carving that incorporated two full-bodied lions flanking the snarling face of a third.  The bay extended two floors, where it culminated in a balcony protected by an ornately carved stone balustrade.

The business relationship between Sarah Harris and Neville & Bagge continued, and in 1909, two years after she moved into No. 50, Sarah commissioned the firm to design a $100,000 six-story apartment house on 157th Street.

Nearby, at No. 40 East 80th Street, Olin D. Gray lived with his wife, the former Lydia Blossom, and their daughter, Laura Blossom Gray.   The same year that Sarah was constructing the 157th Street building, the Grays were finishing their new country house in Garden City.

In 1914 Sarah Harris left West 86th Street.  She sold No. 50 for $80,000—just under $2 million today—to the Grays; the title being transferred to Lydia’s name.   Like Sarah, Lydia was involved in real estate dealings.   Olin Gray was head of the Gray Realty and Development Company, and had been, until 1910, President of the Gray Lithographing Company at No. 15 Laight Street.  Yet it was Lydia’s name that repeatedly appeared in the real estate columns buying and selling properties.

This purchase, however, as it had been for Sarah, was personal and No. 50 West 86th Street was to become the Gray family home.

The Grays were barely settled into the West 86th Street house when scandal threatened to tarnish their good name.   In 1915 investigations into the finances of Olin D. Gray and the now-defunct Gray Lithographing Company, explained why Lydia Blossom Gray was so active in the real estate market.

Court documents relating to the Irving National Bank vs. Gray, revealed that from 1900 to 1910 Gray “drew large sums from [Gray Lithographing] for his own use” and that he had invested the cash into real estate, placing the titles in his wife’s name.  On June 16, 1915 the New-York Tribune reported that Irving National Bank alleged Gray had “transferred assets amounting to about $500,000 to prevent his creditors from collecting judgments…Much of this property, it is alleged, was transferred by Gray to his wife, Mrs. Lydia B. Gray, who is named as a defendant.”  The bank claimed “that Gray has fraudulently concealed property and denied ownership of it.”

The West 86th Street house was, thankfully for the Grays, not involved in the suit.

By the time the untidy legal issues were straightened out, Laura, who preferred to be called Blossom, was growing up.  In 1918 she was graduated from the exclusive Spence School and on February 21, 1919 her mother hosted her debutante dance in the mansion.

The war in Europe was over and America’s fighting men returned home.  One of them was Cameron O’Day Mcpherson, the grandson of Daniel O’Day who helped form the Standard Oil Company with John D. Rockefeller.  Mcpherson had served in the Royal Air Force, “which he joined because of his English and Scotch connections and long residence in London,” as explained by The Sun.

Now, less than six months after Blossom’s debutante dance, the Grays announced her engagement to Mcpherson.  The announcement in The Sun on August 6, 1919 said “The wedding will take place during the mid-winter in St. Thomas’s Church, and will be followed by a reception in the home of Mr. and Mrs. Gray.”  Only part of that would come to pass.
Laura Blossom Gray would get her fashionable society wedding in St. Thomas’s Church on Valentine’s Day, 1920.  But there would be no reception in the West 86th Street mansion.   Two months after the engagement was announced, her parents abruptly sold the house.  On October 22 the New-York Tribune noted the family was “at the Hotel Commodore for a few days.  On their return from the country, about Dec. 1, Mr. and Mrs. Gray will go to the St. Regis.”

It was in the St. Regis Hotel that Blossom’s wedding reception was held.

No. 50 was converted to apartments and Fred M. Santley was among its first tenants.  By 1939 it was owned by the Bank of Manhattan Company, which leased it in February that year.  “The lessee will rent the rooms for furnished apartments after alterations,” reported The New York Times.  The residents were apparently well-to-do.  On June 18, 1939 Mr. and Mrs. Harry Gerstein announced the bar mitzvah of their son, David Elliot, at the nearby Rodeph Sholem Temple in the society pages.

The former mansion saw a relatively quick succession of owners through the 1950s and ‘60s.  In 1961 it was owned by Mr. and Mrs. Eugene Payor who did a rather substantial conversion.  The basement apartment with its separate entrance received a swimming pool and private gallery.  The parlor floor was divided into two large apartments, as was the second floor.  The top two floors contained a combination of small apartments and furnished rooms creating a total of 12 rentable spaces in the house.

The Payors sold the house in 1963.  At the time Curtis Ousley had made a name for himself in the musical world as King Curtis.  The blues and soul musician who started out as a member of Lionel Hampton’s band was also an arranger, composer and bandleader.  His own band had backed Aretha Franklin, as well as pop stars like Andy Williams, Bobby Darrin and Nat King Cole.

Although he lived further uptown, at No. 150 West 96th Street, the 36-year old saxophonist owned No. 50 West 86th Street in 1971.   On the fateful night of August 14 that year, he was visited the property and encountered 26-year old Juan Montanez sitting on the stoop.  Curtis demanded that the young man not loiter on the steps.  Heated words boiled over, erupting into a fist fight.

Suddenly Montanez pulled out a knife and stabbed Curtis.  Before he collapsed onto the sidewalk, the musician wrested the weapon from his attacker, stabbing him.  Before police arrived Montanez had staggered away.

King Curtis was taken to Roosevelt Hospital where he died.  Investigators learned that another man, also with stab wounds, had been admitted to the same hospital almost simultaneously.  Montanez was charged with the homicide.

As it turned out, King Curtis would be just the first in a string of celebrity names to become associated with No. 50 West 86th.   In 1980 a 19-year old wanna-be actor moved into one of the upper floor rooms.  According to another resident, he paid his $300 rent by doing janitorial chores in the building.  A year later, Tom Cruise landed a supporting role in Taps and shortly moved on.

When a penthouse was added to the building in 1989, the fourth floor was converted to a duplex and a triplex apartment, extending upward the new addition.   Robert Downey, Jr.  had been dating actress Jessica Parker for about five years.  He took one of the penthouse apartments and before long Parker moved in as well.  Their romance lasted only for about one more year, after which No. 50 lost one of its celebrities in Parker. 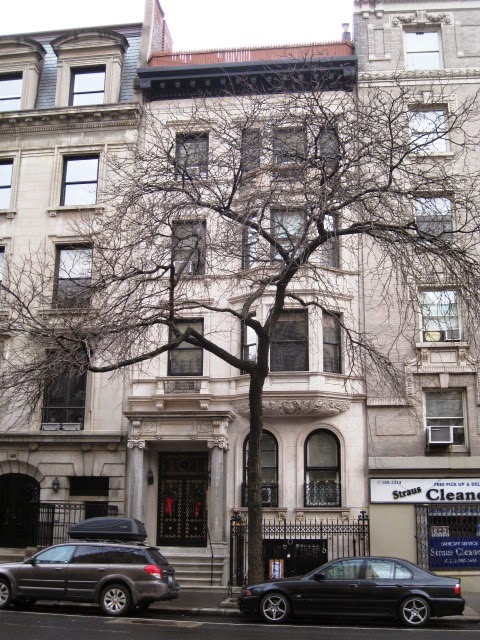 Although most of Neville & Bagge’s interiors have been lost; except for replacement windows and the penthouse, Sarah Harris’s handsome townhouse looks much as it did in 1907.