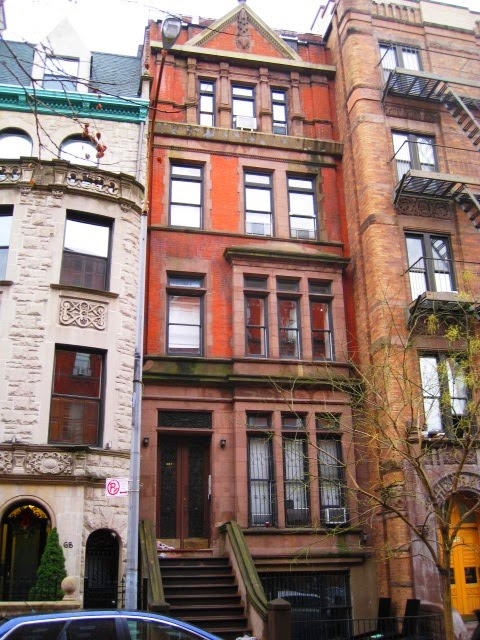 At a time when a frenzy of construction on the Upper West Side had developers keeping architects busy designing rows of townhouses, John G. Prague covered both bases.  Like a handful of other architects financially able to do so, he often acted as his own developer.  His designing of the structures while owning the property they stood on made for a hugely profitable arrangement.

Such was the case when Prague purchased the lot at No. 70 West 87th Street, just off the corner of Columbus Avenue and a block from Central Park.  He chose the Queen Anne style for the high-end residence.  Unlike the formality preferred on the East Side, the style’s quirky elements and asymmetric lines made it more popular on the less stuffy West Side.  Interestingly, however, for this project Prague held the reins tightly, producing an unusually reserved version of the style.

Construction began in 1888 and was completed a year later.  The deep English basement and the parlor level were faced in brownstone, providing a sturdy base for three stories of red brick above.  Other architects would have, perhaps, splashed the façade with terra cotta panels, a variety of materials, and eccentric angles and shapes.  Instead Prague’s design was unexpectedly formal.  It culminated at the fourth floor where Ionic brownstone pilasters standing on tall blocks joined with  the pedimented parapet to create a shallow Greek temple front.  Each of the openings featured a stained glass transom. 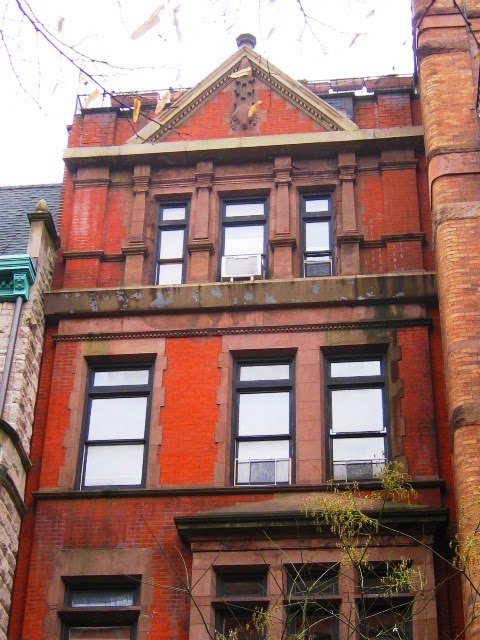 The last decade of the 19th century saw a rabid fad arrive in New York—bicycling.  The owner of No. 70 West 87th Street, J. L. Stevens, got into the trend and on September 25, 1896 he took his bike for a scenic spin along Riverside Drive.  Although the Drive was still being constructed; it had already become a favorite spot for bicyclists.  Stevens could not have been aware that while he pedaled along with other bikers at 114th Street trouble was brewing three blocks to the south.

Startled, the horse shied, throwing Horton to the ground.  The horse panicked.  “More and more alarmed, he started at a racing pace along the driveway, crowded just then with wheelmen and wheelwomen.”  The bicyclists could not react quickly enough to avoid being hit by the runaway horse and cart.  Among those “thrown from their wheels” was J. L. Stevens.

Eventually, the spooked horse crashed the cart, creating the opportunity for his capture.  It was caught “by a mounted Park policeman after he had smashed the light wagon to which he was attached against the protruding roots of a tree,” said The Times.

An ambulance from the Manhattan Hospital arrived to treat Stevens—who received “contusions of right leg and right arm—and two other bicyclists.  His bicycle fared less well.  “The wheels of those run down were badly damaged, and the owners are doubtful upon whom to call for satisfaction—the proprietor of the horse or the owner of the steam roller,” noted the newspaper.

Stevens had sold No. 70 by 1903 to F. L. Gillette, director of the Gillette Clipping Machine Co. and his wife Lena.  The title to the house was, as was customary, put in her name.

The wealthy family would stay on in the residence until October 30, 1909 when the Real Estate Record & Builders’ Guide reported that Lena had sold it to Emily M. Roemer.  Emily was not interested in the house as anything but an investment.  She was well-known among the real estate community for buying and selling properties; and within a few months she sold No. 70 to Alfred Roelker, Jr.   The New York Times, on February 10, 1910, noted “Mr. Roelker buys for occupancy.”

The 35-year old attorney had married Millicent Turle a few years earlier and the New-York Tribune noted that he was “a member of the Bar Association, as well as several of the New-York and suburban clubs.”  He had graduated from Columbia University Law School in 1898 and now practiced from No. 80 Broadway.  The couple’s new home was necessary for their growing family.  The had two daughters, Roberta, who was 4 years old, and Katrina, just a year old.  The girls would be joined by the arrival of Hildegarde in 1913.

The Turle family lived in Brooklyn, members of what was known as the Heights Society—referring to the mansion-filled Brooklyn Heights neighborhood.  Millicent had been educated in the exclusive Miss Bodman’s School there.  The 1914-1915 Woman’s Who’s Who of America would mention that she “Favors woman suffrage.”

Something happened in 1912 the prompted the family to leave West 87th Street—possible the health of Millicent’s elderly mother.  On November 30 Brooklyn Life announced “Mr. and Mrs. Alfred Roelker, Jr., who have been residing in Manhattan at 70 West Eighty-seventh Street, will make their home with the latter’s mother, Mrs. Robert H. Turle, of 34 Monroe Place (Brooklyn).”

The unmarried Julia M. Hall leased the Roelker home for a few years; moving a block away to No. 138 West 87th Street in 1915.  The house became home to Harold A. Gilbert until 1921 when the once-wealthy businessman had a change in fortune.  On September 15 that year the New-York Tribune reported on his bankruptcy, publicizing his embarrassing financial situation:  “liabilities $8,864, assets none.”

If the Roelkers had ever held out hope of returning to West 87th Street, they now gave up.  With Gilbert gone, Alfred Roelker sold the house to the Broadedge Corporation.  Although it was still listed as a “private dwelling,” it is evident that the new owners leased rooms in the house.

Among the tenants was the widowed Johanna Kelly and her 15-year old daughter Alice.  Johanna had recently worked as the housekeeper of general contractor and builder Louis Fagnant.  The 39-year old man lived in an apartment at No. 144 West 105th Street with his wife and two young daughters.

When Johanna accepted the position in 1921, about a year after her husband died, she and Alice moved into the apartment with the Fagnants.  After only three months, however, she resigned and moved to No. 70 West 87th.  “She left, she said, because of the evident attachment between her fifteen-year-old daughter and her employer,” said the New-York Tribune on March 4, 1922.

Suspicious, Johanna had questioned Alice about her relationship with the married man.  The Tribune said she “was assured that, strange as it appeared, she was engaged to marry Fagnant.”  To prove her story, the girl showed her mother a diamond engagement ring, a wedding ring and a string of pearls the older man had given her.  She told Johanna that the wedding was to take place in January, “after which they would go to Canada.”

The shocked housekeeper returned the jewelry to Fagnant, resigned and left.  When the contractor answered a knock on his apartment door on March 3, 1922 he was confronted by agents of the New York Society for the Prevention of Cruelty to Children and arrested.  He told detectives that Alice’s story was “absurd.”

Later that year Charles W. Wynne and Louis H. Low, real estate operators purchased No. 70.  It would be a short ownership.  Within weeks they resold it.  The New-York Tribune, on November 23, 1922, noted that the purchaser intended “extensive alterations.”

Barnet Bonderefsky owned the building for several years; and it never again would be a private home.  He leased it several times as “a rooming house.”

The interior was heavily altered in 1948 when the basement was converted to a launderette and the upper floors were rented out as furnished rooms.  The configuration lasted until 1995 when the commercial space was replaced by two apartments and the upper floors were divided into two apartments each.  A penthouse was added behind the parapet, creating a duplex on the top floor. 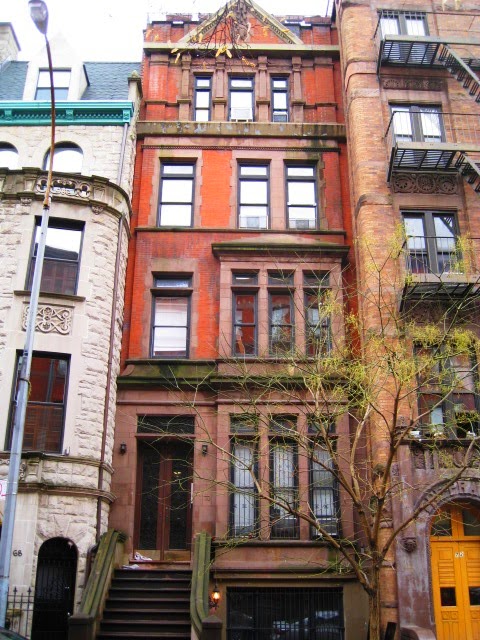 Through it all Prague’s interesting 1889 façade remains essentially intact.  Sadly when the windows were replace the stained glass transoms were removed.  Nevertheless, Prague’s formal take on Queen Anne is a striking Victorian survivor.