The Federal Relic at No. 357 West Broadway 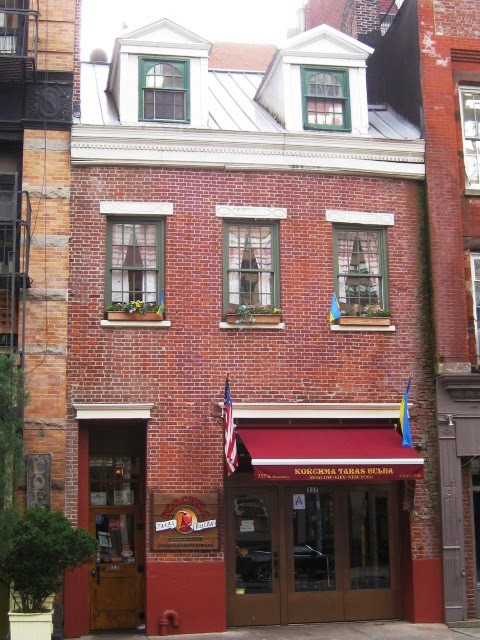 The Bayard family not only had immense wealth in Colonial times—they engaged in a tremendous trade with sugar plantations in the Caribbean and owned a large Sugar House on Wall Street—but they wielded significant political power.  The family owned a sprawling estate—referred to as the Bayard or West Farm—north of the city in what two centuries later would be known as Soho.

By the end of the Revolutionary War, however, Nicholas Bayard had fallen on hard times.   The conflict itself had negative financial consequences, and by now the Caribbean sugar economy had all but collapsed.  In 1789 Bayard declared bankruptcy and was forced to sell the Bayard Farm to pay his creditors.  The old sugar house was lost as well.

Although the property was divided into building lots; little development was seen until Broadway was paved and sidewalks laid as far north as Astor Place in 1809.  Although development slowed with the outbreak of the War of 1812; it exploded around 1815 and continued for a decade.  Fine brick residences were erected along Broadway with more modest homes sprouting on the side streets.

It was at this time, around 1825, that the two and a half story house at No. 357 West Broadway was constructed.   A low stoop arose to the parlor floor of the middle class home.  The Flemish bond red brick was trimmed with brownstone sills and lintels.  Two prim dormers with fluted pilasters perched above the cornice.

The neighborhood around No. 357 remained quietly residential through the decade prior to the Civil War.  Then, little by little, handsome homes of Broadway were lost to grand retail emporiums and hotels as commerce pushed northward.  As the century drew to a close, the silk district had engulfed Broome Street one block north of No. 357 West Broadway.   But the little brick building would have a less glamorous fate than housing imported silks.

By at least 1897 the house was no longer residential.  That year it was headquarters of Louis T. Swartz whose self-named company, L. T. Swartz, manufactured ash cans.   The small firm would remain here until 1904, when Cadoo & Co. moved in.  George J. Cadoo was less successful than the ash can maker and his company dissolved just two years later.

J. L. Prouty & Sons, Inc., dealers in animal skins and furs, took the old house as its warehouse when Cadoo moved out.   Prouty used Adams Express for the transportation of some of its goods; an arrangement that cause the firm serious financial loss in 1907.

Twenty-year old William Leonard was a driver for Adams Express and despite his tender age had already served two years and eight months in Sing Sing for grand larceny and another term in the Elmira Reformatory for burglary.   In November 1906 Detective Sergeants Dale and Fogarty happened to notice the door of a vacant store on West 37th Street slightly ajar.  They entered and found the floor littered with paper, string, an invoice of A. Epstein & Co., and a beaver skin.

The detectives went from one fur dealer to another until they “finally found the owner in Prouty & Son of 357 West Broadway, who had been robbed of $5,000 worth of furs.  Then the detectives went to Epstein & Co. and found that the firm had shipped by the Adams Express Company some goods that had never reached the consignee.”

It was soon discovered that Leonard had stolen nearly $30,000 worth of goods; a significant three quarters of a million dollars today.

In the years just prior to World War I No. 357 had become more industrial.  Benjamin Levi ran his tool and die operation here in 1915, advertising “Special electrical and mechanical devices built to order.  Models, Tools, Dies.”

The massive brick, stone and cast iron loft buildings in the area suffered major abuse during the second half of the 20th century.  Neglected and deteriorating they housed mostly small factories and businesses.  No. 357 was not immune.  At some point, probably around mid-century, the parlor floor was removed and the basement floored over.  The doorway was moved to sidewalk level and an industrial opening was broken through.  In the early 1970s the grimy little building was being used as a garage.

Then, in 1992 as the Soho area was rediscovered, No. 357 received a make-over.  The garage area was converted to a restaurant-bar and the upper floors made into offices.   Today the remaining façade has been restored.   The brownstone has somewhat unfortunately been painted white; but the wonderful lintels survive intact.  It is a surprising reminder of a time when West Broadway was lined with tidy little homes like this.