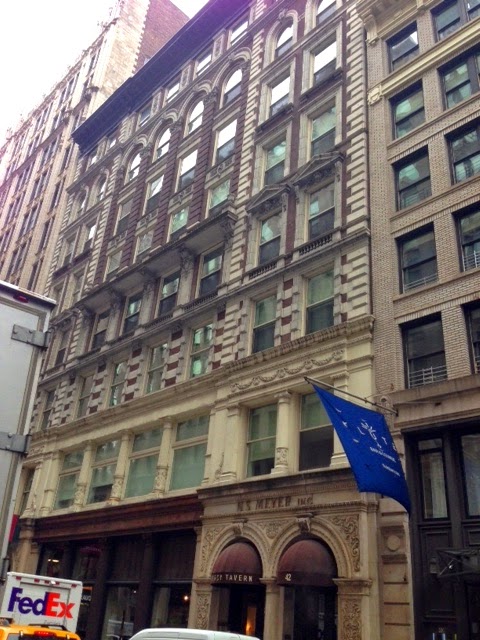 Although brownstone rowhouses still, for the most part, made up the fabric of East 20th Street between Broadway and Park Avenue in 1895; the residential tone of the neighborhood was doomed.  That year mural artist and set designer E. Hamilton Bell was still living at No. 48; but already neighboring homes had been taken over by dress makers, milliners and, in one case, a basement laundry.

On March 5, 1898 The Real Estate Record & Builders’ Guide reported that “Iron & Todd were the buyers of Nos. 42-48 East 20th street, four 3-story dwellings, on plot 88x92, which they will improve.”  Iron & Todd, also known as Seaboard Realty Co., had major plans for the old brownstones.

The architectural firm of Neville & Bagge received the commission to replace them with an up-to-date store and loft building.  Iron & Todd were well aware that the millinery and apparel districts were inching into the neighborhood; and modern factory and showroom space would be in high demand.

The architects designed an eight story structure in the popular Beaux Arts style.  Formally symmetrical, every element on its brick and stone façade was balanced by its twin.  Pairs of elaborately carved arched entrances anchored the ends of the two-story limestone base.  The intricate foliate carving of the keystones and spandrels continued even onto the paneled pilasters.  Between the entrances, handsome fluted Corinthian columns supported a copper-clad entablature and separated the large showroom windows.

Above the second story, which featured engaged columns, festooning and florid console brackets, red brick was interrupted by white limestone pilasters, quoins, balusters and pediments.  Completed in 1899, it was a dignified palace meant to house factory workers.

Among the first tenants was Pierce, Butler & Pierce Mfg. Company which moved in in January 1899.  The company manufactured “everything in heating, plumbing and power for export,” and was headquartered in Syracuse, New York.  The 20th Street space would double as Manhattan offices and showroom for its diverse range of boilers, radiators, bathtubs, toilets, and sinks, among other items.  Sanitary and Heating Age promised on January 21, 1899 that the firm “will soon present a varied line of goods attractively.”

The first floor retail space was taken by furniture company Palmer & Embury Manufacturing Co.  The Decorator and Furnisher remarked on the firm’s modern take on historic styles.  “Many of the suites are exact reproductions of historical French eighteenth century furniture with all the suavity of line, brilliance of carving, and luxury of covering that characterize the originals.  Many pieces, while based on certain styles, are modernized in design…Many other good things are exhibited in the display of their renowned cabinet makers.  There are Chippendale cabinets in mahogany, inlaid with brass and pearl marquetry; revolving leaf tea tables, inlaid in pearl and brass; Colonial rockers in mahogany, dining chairs in oak and leather, overstuffed suites in saddlebag upholstery and in general examples of the many light and fanciful contributions to the varied wealth of modern furnishing materials.” 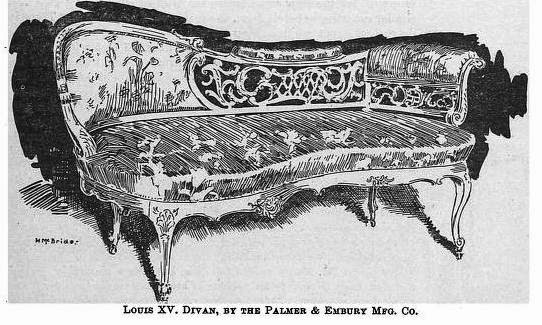 The odd mix of plumbing and garment companies continued when the American Radiator Co. moved in around 1902, sharing the building with firms like the Peerless Pattern Company.   Peerless underwent a bit of a scuffle that year.

On March 21 the board of directors met and elected George A. Newton as president; thereby ousting William H. Hudson as its chief.  A displeased Hudson obtained an injunction restraining Newton from taking over the company.  But the injunction was only valid until April 14.

At midnight the directors and the new president marched into the building to take possession of Peerless Pattern Company.  But Hudson had anticipated such a move and was already there.  He steadfastly refused to unbolt the door until one of the men in the hallway pretended to be a detective and ordered Hudson to let them in.

The minute he opened the door the directors tried to oust him “and then there was a scuffle, to end which Policeman Geary was called in,” reported The Sun on April 15, 1902.  The undignified business ended with Geary arresting the former president.

In 1904 Palmer & Embury made a significant policy change:  the furniture manufacturers allowed the public into its showroom.  On October 13, 1904 it announced through Furniture World and Furniture Buyer and Decorator “For the past six years our showrooms have been absolutely closed to all but the dealer, a policy voluntarily adopted by us.”  But now, it said, “On and after this date, our warerooms at 42-48 East Twentieth Street will be OPEN, so that Furniture Dealers and Decorators may bring in their customers.”

In reporting the new policy, the firm reminded dealers that not only did it manufacture household furniture “in all the important French, English and Italian periods;’ but it imported carpeting.  “Importers of exclusive designs in Aubusson, Belleville and other Tapestries, fine Broches and English Morocco,” said the advertisement.

Palmer & Embury would remain in the 20th Street location for another twelve years before moving to No. 119 West 40th Street in 1916.

Although the majority of tenants continued to be in the apparel business, like Herx, Ames & Rau; and William J. Rosenberg (who took 5,500 square feet in February 1910); there were still other firms like McCrum-Howell Company.   Run by the 32-year old Lloyd Garrison McCrum, the company offered a variety of household products like the Richmond Suction Cleaner, guaranteed to “free you from brooms, mops and dusters—and the backaches and drudgery they bring,” and the ingenious “Richmond Suds-Maker” that attached to a faucet and filled the sink with warm, soapy water.

There was one loft in the building still vacant in 1910; but building superintendent James Camac made good use of it.   In his free time Camac, who lived in Bay Shore, Long Island, constructed a boat in the empty space.  The problem he had to address when the 20-foot boat with a 7-foot beam was completed was how to get it out of the building.

On April 10, 1910 The New York Times reported on his solution with a headline that read “Launches a Boat from Lofty Window.”  The newspaper explained that he “launched his new motor boat yesterday with piano movers’ tackle.”  The boat was lowered from the window onto 20th Street to the amazement of passersby.

For the next few years the building became home to A & C Leather Goods Co., makers of leather traveling bags “and novelties.”  The company employed 40 workers, only three of whom were women (an unusual proportion in a building filled with garment companies that employed women almost exclusively).  Also here was W. J. Rosenberg, “makers of fringes and tassels;” Lorimer & Greenbaum Co., “art linens;” and the Lauer Manufacturing Co.  And, as had been the case since the building opened, there was at least one non-garment related company.  When Palmer & Embury left, Belding Hall Co., manufacturers of refrigerators, took over the first floor showroom.

Apparel firms continued to call the building home throughout the 1920s.  Perfect Boys’ Wash Suit Company took a loft in the building in May, 1921 and two months later the Paramount Neckwear Company signed a lease.  R. Krause & Son manufactured “embossers and ribbons,” and Morris Zuckerman made dresses.

In 1924 Walter Gretsch and William Brenner established the wholesale musical instrument company of Gretsch & Brenner.  Gretsch had been partners with his brother Fred in the manufacture of Gretsch guitars; but now he and Brenner struck out to import European instruments and to represent manufacturers.  Among the instruments that made the firm successful was the Gibson guitar.

After holding the building for two decades, the estate of Emily Hopkins sold it to Henry W. Gennerich in February 1926.

On November 11, 1939 a customer entered the seventh floor office of Herman Mirsky, part owner of a braid and dress trimming company.  What should have been a normal business transaction was anything but that when the man discovered the body of the 45-year old man “with a bullet wound in the right temple,” as reported by The Times.  Police listed the case as “apparently suicide.”

Another long-term tenant would be gone within the year.  The 58-year old musical instrument importer Walter Gretsch died on May 28, 1940 after a long illness.

The attachment tenants had to the building was reflected in May 1946 when a group of them joined together to purchase it.  The New York Times said the move was “to assure continued occupancy.”

Already, however, the Garment District had left the East 20th Street neighborhood.  For the rest of the century various operations would come and go as the block slowly became more upscale.  In 1995 the former store and showroom space was converted to a restaurant and in 2003 the upper floors, once home to ribbon manufacturers and sellers of suds-makers, became high-end residences. 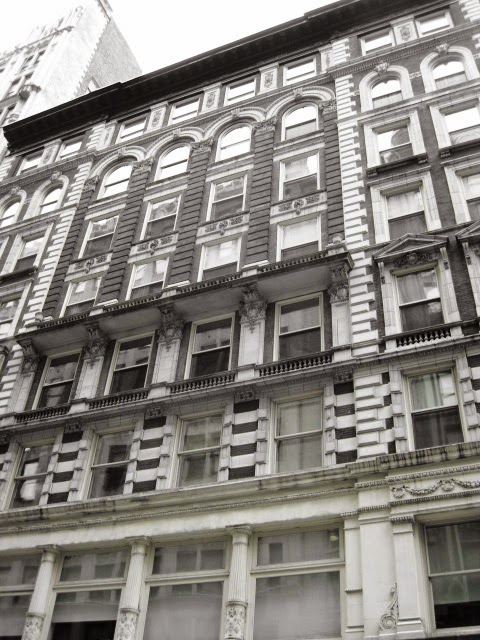 Through it all, however, Neville & Bagge’s noble exterior has survived remarkably well.  Even the cornice and the street level—always the first victims of “modernization”—remain intact.